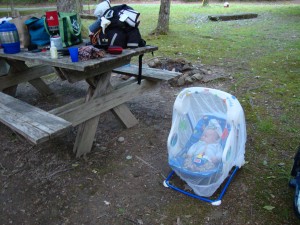 Canaan waiting for everyone to finish breakfast so he could hit up Fern Buttress! 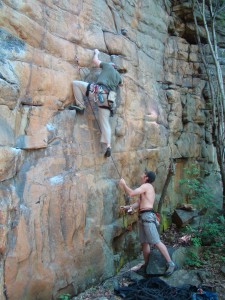 After several weekend weather woes, we were finally able to get Canaan up to the New River Gorge for his first multi-day climbing/camping trip.  We decided it would be best to go up during mid-week as to figure out the logistics of bringing a baby to the crag without also having to battle all the crowds of Memorial Day weekend.  We convinced our friend Scott to be our third man/guinea pig under the stipulation that we wouldn’t stick him with the job of baby-watching. 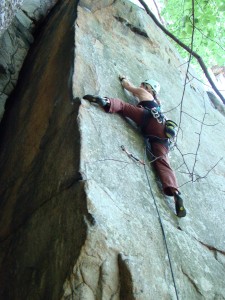 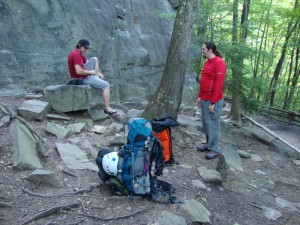 Scott and Steve gearing up for the day at the Junkyard

So, with as rain-free of a forecast as you can hope for at the New River Gorge in May, we packed up twice as much gear as we had in the past for the same trip, and headed north on Wednesday afternoon, with plans to meet up with Scott that night.  The ride up was easier than anticipated…we only had to make one feeding stop for Canaan, and combining it with a gas stop, we arrived at the Chestnut Creek Campground in Fayetteville, WV in right at 5 hours.  We put Canaan in the swing while we set up the tent and cooked some pasta for dinner, and then we were all ready for bed.  I would wager that Canaan’s first time sleeping in a tent was way better than most people’s, certainly better than my dad’s was on our father/daughter trip last summer…we all got about as many hours of sleep as we are used to having, which at this point is a manageable amount, even though its still broken up by a couple of night feedings here and there. 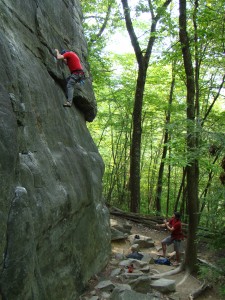 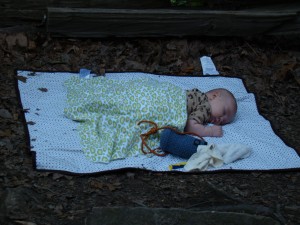 The Bean napping at the Junkyard with his chalkbag (filled with burp cloths, of course!)

Day 1 Routes ~ Fern Buttress
Hysteria – 5.8 – Scott put up this nice gear route for us to warm-up on with a great view of the river at the top!
New Tricks for Old Dogs – 5.10c – Steve hung the draws, and we all took turns on the sharp end – pumpy and fun, I felt good about flashing the route.
Two-Tone Arete – 5.10b – The boys let me hang the draws and get the onsight on this one.  A few of the clipping stances were obviously intended for someone taller than me, which made for a couple of tenuous moves before clipping, and there was a fairly runout section over easier ground, but the climbing was amazing with some really cool moves – especially at the top!
Fragile Ego System – 5.10a – I’ve done this route before, and I hate it…  Reachy, runout slab requiring deadpointing moves is not on my list of fun.  Canaan had been fussy, and was finally sleeping soundly in the wrap, so I sat this one out so he could sleep and let the boys have at this one.
Wild Seed – 5.11a – Scott hung the draws on this one, Steve seconded, and I decided to lead it.  Beautiful route – high first bolt over easy terrain to a couple bolts’ worth of technical slab, then a heady traverse on sketchy feet but good hands to a giant hueco, where you can clip the crux bolt.  The crux is very well protected, then the rest of the route is a jug haul through steep overhangs to the top. 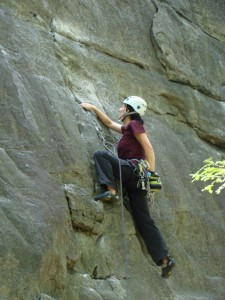 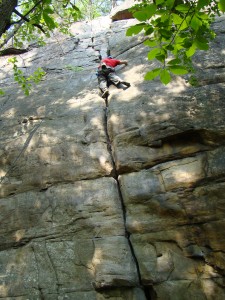 Canaan did pretty good the first day, although there were several times where he was really fussy, (generally right as Mommy was right in the middle of a crux sequence…), and he was downright inconsolable just before we hiked out.  We discussed it over dinner at Pies n’ Pints (where else?!?) as Canaan konked out in his carseat, and came up with a few ideas.  First of all, we were on the move a lot today, in between routes, whereas when we climbed at Pilot, we had camped out in an area for several routes before moving to a new area.  Second, I felt like I may have been a bit dehydrated, and I think that may have affected my milk supply, which obviously would have caused Canaan some frustrations.  And lastly, when I changed his outfit just before dinner, I noticed a bit of prickly heat rash on his chest, so perhaps he had gotten a little overheated.  We kept those thoughts in mind as we planned Day 2.  We ended up deciding on The Junkyard for the next day – the forecast was calling for a 70% chance of rain in the afternoon, so we figured we would go for an area with a quick approach, so that we could make a fast getaway when it started raining. 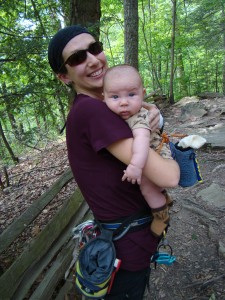 Canaan excited to have a chalkbag just like Mommy (thanks Marc and Marie!) 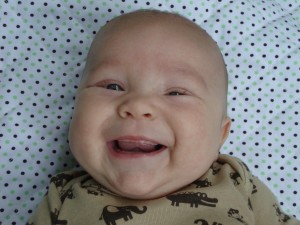 Day 2 Routes ~ The Junkyard
New River Gunks – 5.7 – Scott put up our warm-up route.  Slabbish moves down low with a very awkward for the grade roof finish.
Team Jesus – 5.10a/b – My hardest trad lead to date!  Woo-hoo!  I toproped it first, and then Steve cleaned all the pieces except the pink tricam after the crux, so I guess it was mostly a redpoint, but somewhat of a pinkpoint (we’ll call it maroon?!?)  When I got to the tricam, I found that I easily could have placed it, and was a little disappointed that I had asked for it to be left in.  Oh well, next time 🙂
The Entertainer – 5.10a – This route was SO fun – I’ve decided that I want to be a crack climber when I grow up 🙂  Burly start with sinker hand jams up and over a small bulging roof, then some face climbing with a leaning crack up to a somewhat steep finish.  Awesome route.  Tons of fun.
New Yosemite – 5.9 – Had been on this several years ago on my first trip to the New, when I didn’t know a hand jam from a backstep, and I remember flailing on this hardcore.  This time around, all my hand jams felt secure and smooth. 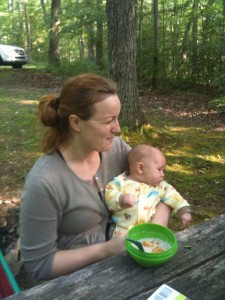 Canaan "helping" Manuela with her breakfast on Saturday morning

Norbert and Manuela were coming up for the weekend, and we had plans for dinner at Smokey’s to celebrate Norbert’s birthday, but they were running a little late, so we decided to try and squeeze in one more route – Four Sheets to the Wind (5.9)…but darkening skies, not so distant thunder, and rapidly increasing winds made us question our decision – a hornet’s nest right before the second crux sealed the deal and caused us to back off and make a mad dash for the car.  The all-you-can-eat-buffet at Smokey’s was just what everyone needed – Canaan fell asleep in the carseat on the way over and was down for the count, so for the second night in a row, we loaded him in the tent, carseat and all. 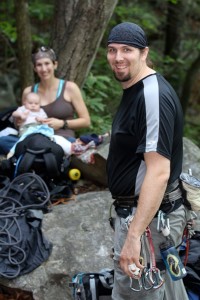 Gearing up for the day at Endless Wall 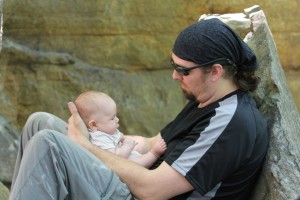 Steve getting some love from the Bean after heading up "The Upheaval", 5.9

The weather was bright and cheery on Saturday morning, and not as humid as it had been.  The campground was packed with tents that had been put up throughout the night, so we knew that the cliffs would be jam-packed for the holiday weekend.  Scott went climbing with some other friends at Beauty Mountain (but not before telling the Bean what a good boy he had been!) so we gave Manbert the tour de Endless Wall, since they’d never been there, and banking that the crowds would be more spread out there than at some of the other areas.  I think we made the right choice – we did run into a fair amount of folks, but didn’t really have to wait for any of the routes we wanted to be open.

Day 3 Routes ~ Endless Wall
The Upheaval – 5.9 – one of my favorite warm-ups at Endless.  Just slabby enough to let you ease into the day without getting pumped, with bolts spaced just far enough apart to let you get your mental game ready, and long enough to make for a spectacular view at the top.
Meniscus Burning – 5.11c – while we were waiting for another group to finish on Fool Effect, I decided to play around on this short little route around the corner while we ate lunch.  I got shut down.  It was not pretty.  Finally left a bailer on the last bolt before the anchors.
Totally-Clipse – 5.8 – More casual slabby fun.  Canaan must have been bored, b/c he slept through the whole thing…
Fool Effect – 5.9 – GREAT route, I love it b/c it has a little bit of everything – funky hard start to some technical slabby stuff, into a right facing flake system (complete with a wasp nest that is there year after year just left of one of the bolts…), and ending with a fun little roof sequence.  While we were on this route, another party came by wanting to do it, and seeing that we were on it, (and noting the shiny booty gear at bolt 3), opted for the 11c that I had gotten schooled on earlier.  The first guy succumbed to the same fate as I had, but the other guy in their party was able to complete the route.  He was nice enough to give me back my bailer biner (even after suffering some grief from his two friends for doing so), and declared the crux move way harder than 11c (he put it at 12b or 12c…).  Not sure if he was exaggerating, but it made me feel better at the very least – and I got my carabiner back so I can bail another day 🙂 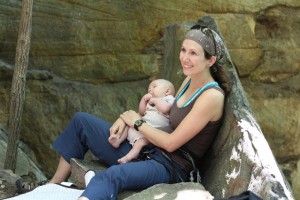 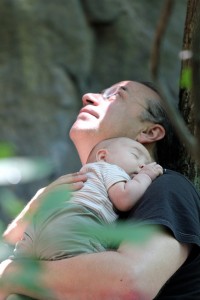 Norbert hanging out with slumbering C-Squatch

With a 5 hour drive looming ahead of us, we decided we should be done for the day, so we hiked back to the car, stopping once so that Canaan could flirt with a couple of girls gearing up for Exoduster, another Endless Wall classic.  We parted ways with Manbert, and hit up Wendy’s on the way out.  We fed Canaan in the parking lot, and heard nothing but snoring after that until a couple hours AFTER we got home.

It was a fantastic trip, and we came back feeling exhausted, yet rejuvenated.  A big thank you goes out to Scott, Norbert, and Manuela, for climbing with us – we couldn’t have gone without you guys!  (And also to Manuela for breaking in her new mack-daddy camera with us!)  We came back with wonderful memories to share with Canaan about his first trip to the New, a seemingly endless pile of laundry, and a few mosquito bites (but only one belonging to Canaan – but I feel like after 3 days of being in the woods 24/7, and the fact that he’s too young for bug spray, coming out with only one means we did a pretty good job…).  Much of the car ride back was spent contemplating what areas we’ll hit up on the next trip, which is of course the best way to end things! 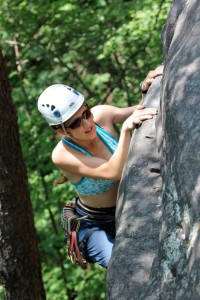 Ending out the weekend on "Fool Effect", 5.9

2 Responses to “C-Squatch and “The New” Invasion”