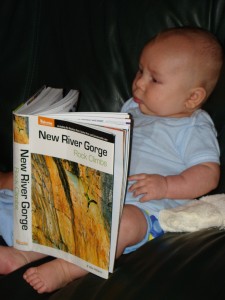 Canaan picking out his next project.

Since Canaan did so well a couple of weeks ago at the New, we decided to get up there again this past weekend.  We took our friends Marc and Marie, who are gym regulars that are relatively new to the outdoor scene.  We thought it would be great fun to head a little further north to Summersville Lake, a pristine blue mountain lake that doesn’t feel like it should belong in as benign a place as West Virginia.  The best part about climbing on a hot day in Summersville is the post-climb dip into the lake.  I went out the day before we left to get Canaan a cute swimmy diaper – little did we know that he wouldn’t get a chance to use it, but not because of lack of water… 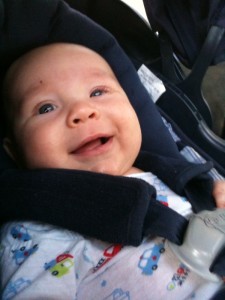 On the road again!

Now, it rains in the New River Gorge.  All the time.  I’m not sure if I’ve ever been there for a whole weekend where there hasn’t been at least a threat of rain at some point.  But if you choose your weekend based on the weather forecast, you’d never get there at all.  For reasosn unbeknownst to me (but the weather man could probably explain it) the weather tends to be patchy and unpredictable throughout the area.  Its not uncommon for us to see nothing more than a distant storm cloud in the afternoon, only to get back to our tent and realize that the campground had gotten dumped on.  Or, to get washed out in the morning, only to climb on dry rock all afternoon in a different area.  Point being, as long as the chance of rain isn’t more than 50-60%, its usually a go for us.  All week long the forecast had been looking reasonable, until Friday afternoon, when all of a sudden Saturday and Sunday started looking monsoon-ish.  But considering the unpredictability of the New, and the fact that there is a fair amount rock that is sheltered from any rain, we were still optimistic. 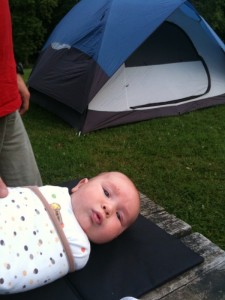 All swaddled up and ready for bed!

The first storm came through after we’d been out of our tent for about 10 minutes, and lasted only about that long.  We saw on the doppler (thank you Weather Channel App for Iphone!!!) patches of rain that appeared to be hit or miss, but not a “settling in” type of rain, so we headed out to the Lake.  It was Marc and Marie’s first time out at the Lake, so we wanted to take them to the Orange Oswald Wall, which, although is generally the most crowded, is also the most picturesque – and also has some nice swimming spots along the way there.  When we got there about half the routes were dry, and there were only a couple other folks there, which is unusual, because usually that section of cliff is swarming with groups of people.  We figured that we lucked out – the weather was bad enough to keep most people away, but good enough to still climb! 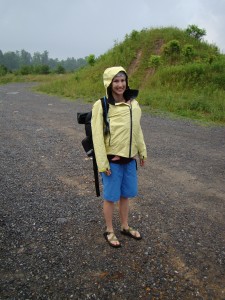 Canaan was the only smart one who knew how to stay dry! 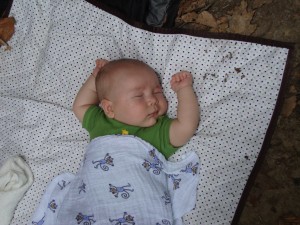 Taking advantage during the dry moments to relax

Day 1 Routes ~
She Got the Bosch, I Got Drilled (5.10a) – Pumpier than what we usually warm up on, but it was the easiest of the routes that were dry.  We let Marc go for the onsight, then Steve and I led on his draws.
Scoot Your Muffin (5.10b) – This one was a little frustrating for me.  It had been almost 2 years since I’d been on it, and I had completely forgotten my beta for the roof up top.  After whipping several times using Marc and Steve’s tall man beta, I finally found the sequence that worked for me.  Maybe next time for the redpoint I guess…Marie got a lesson in smearing and did awesome working her way thru the edgy face down low.
Baby’s Got a Bolt Gun (5.10c) – It was just starting to drizzle again, and was looking a little ominous when Marc finished this one, so we decided it would be best in the interest of time if I went ahead and cleaned.  Wow – best choice of the day – it started POURING on me right as I moved over the steep section, and I was really thankful that I wasn’t on the sharp end. 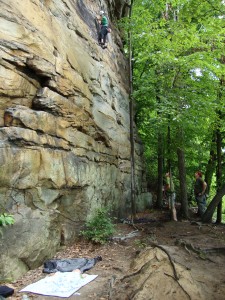 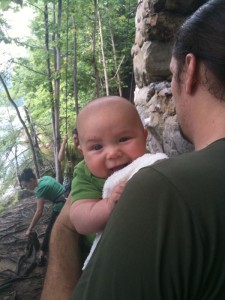 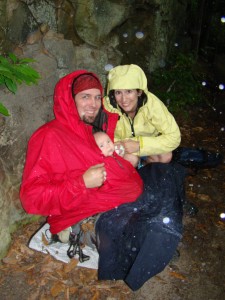 Why go to a studio for a family portrait when you can do one in the middle of a rainstorm?!?

At this point the rain appeared to be sticking around for a little while, so we opted to pack up all of our stuff and head to the Narcissus Cave, which was just a few minutes away, to wait out the storm.  We got Canaan situated in the Bjorn, and my rain jacket zipped up with him inside, and I had a towel to hold over his head.  As I quickly but carefully sloshed my way through the roots, puddles, and rhododendrons to the cave, I had some fleeting thoughts that perhaps I was a bad mom for taking my son out in weather like this (especially when I knew ahead of time that it was going to rain).  I half expected to find child services waiting for me in the Narcissus Cave…but as the four of us were spreading our gear out over the rocks to try and dry it out, I glanced over at Canaan spread out on his blanket, and he flashed me a beaming smile.  It was as if he thought it was hysterical that the four of us looked like mud-wrestling, sopping wet rats while he was white as snow and dry as a bone.  It made me feel better that he was no worse for the wear, and I couldn’t help but picture telling him this story as well as the many more adventure stories that I’m sure we’ll have with him down the road. 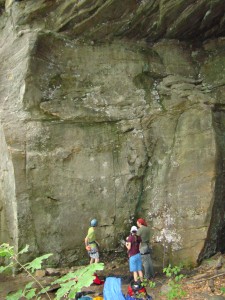 Playing around in the Narcissus Cave

Since we had nothing to do but wait around for the storm system to pass through, Marc decided to have a go at Narcissus.  Steve found a gigantic tree limb and was able to stick clip the first bolt, but Marc ended up not really making it any farther than that.  No one else felt motivated to do anything but lay around (except for Canaan who wanted to eat 🙂 ), so Steve taught Marc the Texas Rope Trick and we successfully retrieved our gear.  The trail out had turned into a small stream, which actually felt nice and cool on our feet (as well as cleaned them off a little!)  On cue it started raining when we got back to our campsite, so we grabbed all the stuff we needed for dinner and had a nice jetboil party underneath the small pavillion beside the campground restaurant – topped off at the end of the day with some cider and cookie dough fudge! 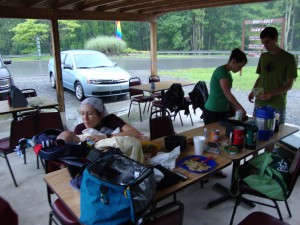 Everyone was awakened at 3 am by a torrential downpour and thunder that sounded like it was right on top of our tent.  Canaan was of course hungry when he woke up, but with a full belly, he slept through the rest of the storm without so much as a peep!  On Sunday we decided to climb at Kaymoor, which every New climber knows is a popular rainy day destination, due to the fact that several of the routes are kept dry by a large roof on top of them. 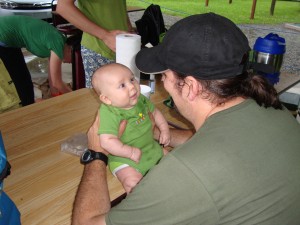 Canaan telling Daddy his highlight of the day

When we got there, we heard some very horrible news.  The day before a woman had fallen from the top of the cliff while cleaning the anchors of a route.  I don’t want to dwell on the details of the accident here, but felt it should be mentioned because the news weighed very heavily on all of us.  To generalize what happened without a lot of climber jargon, the woman was using a piece of equipment in a way that it was not intended to be used, which made the entire system unsafe.  For those that are curious, here is a UKC video that warns against this very practice, and also provides a good visual for understanding what went wrong in the woman’s set-up.  Neither Steve nor I have ever used this piece of equipment for any reason, and I’m sure that won’t change any time soon. This very tragic accident should serve as a sobering reminder to fellow climbers out there to ALWAYS double and triple check your anchor set-up before going off your belayer. 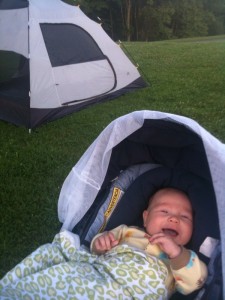 As you can see, Canaan was pretty shaken up about the storm that rolled through in the middle of the night.

Despite the somber mood, we decided to go ahead and climb since we were already there, the rock was dry, and the sun was actually starting to peek out.  Also I think no one wanted to finish the weekend on such a bad note.  We only had time for a couple of routes before it was time to head back home, but with all the rain we’d had on the weekend, there wasn’t a ton that was left dry anyway.

Day 2 Routes ~
Rico Suave (5.10a) – The guidebook touts this as the best of its grade in the whole region.  I believe it.  Really fun moves up a well-protected arete.
Not on the First Date (5.11c) – I was able to rig a toprope up on this one on the way down from Rico.  This one packed quite a punch for being so short…reachy but straightforward moves on incut holds trending left into slightly easier terrain to a bulge.  The bulge was the crux, using a series of heinous crimps with really high feet.  It finished on the slabby rest ledge of Rico.

I can honestly say that this was the crappiest weather weekend we’ve ever had at the New.  Thankfully however, despite the weather and unfortunate circumstances, the 5 of us were able to still have lots of fun this weekend!  Maybe next time Canaan will actually get to wear that swimmy diaper. 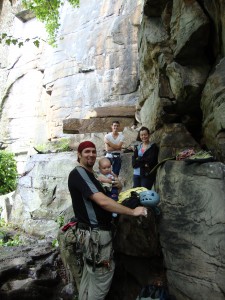 Finally the sun came out!

3 Responses to “When it Rains, it Pours…”