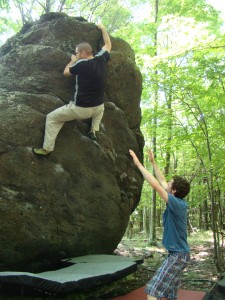 Steve about to top out on Ranger Rick (V1)

……is spectacular!  I can’t believe we never knew about it til recently!  Our journey started out on Friday afternoon with a small hiccup – as we were packing up the car, our friend that was supposed to be showing us around on Saturday texted us that he had to bail due to having kidney stones….hmmm, I GUESS that’s a reasonable excuse and we’ll let it slide… 🙂  Anyway, we hurriedly printed out the problem descriptions from Mountain Project and jumped in the car, hoping for the best… 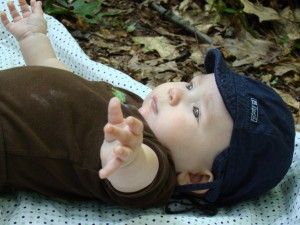 Canaan working out his beta for Ranger Rick (V1)

And the best it was!  Steve even said it was the most fun he’d ever had bouldering outside before!.   Even though our “tour guide” had bailed, he had another couple of friends (also first timers to the area), who were still planning on meeting out there Saturday morning.  And voila!  Ben and Rachel from Asheville were our new friends and bouldering partners for the weekend!  Our Mountain Project descriptions helped out a TON, and though not nearly as good as a real person showing us around, definitely helped us to not only find, but also to identify virtually all the problems we ended up getting on throughout the weekend! 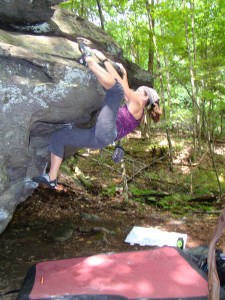 Rachel on Jaws (V1+) while Ben spots, and Steve and Canaan observe

Day 1 ~
Since we met in the parking lot at the Contact Station, we decided to start out there.  We warmed up on Ranger Rick (V1), a really fun line up lots of juggy goodness, and also experimented with a variation coming around from the right side of the boulder, also felt V1.  It took me a few tries, but I was also able to send the Ranger Rick SDS Variation (V4+), which is the first V4+ I’d ever done outside! (to be honest though, there were only 2 hard moves, right off the start…)  Next was what ended up being my favorite problem of the whole weekend – Periscope (V3).  From there we all headed down the hill, where Ben would have flashed True Grit (V5) if his hands had been switched on the start holds.  Steve, Rachel and I wanted no part in steep V5 land, so we headed across the road to the Contact Boulder.  Some of the lines down there were wet, but we were able to get on Black Snake (V1), Sleepy Hollow (V1), and Heel or Peel (V1).  I was also happy about flashing Copperhead (V3).  Everything else was looking pretty slimy, so we drove up to the other end of the park to boulder along the Listening Rock Trail. 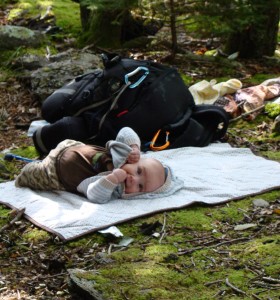 Sweet Canaan being a good boy 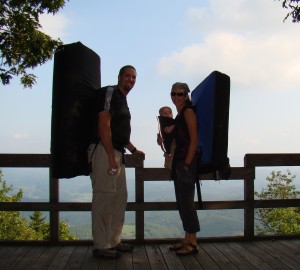 Enjoying the view from the lookout by the Bilingual Boulder 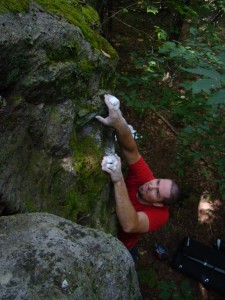 Canaan fell asleep in the car on the way up, so we decided it would be a good time for a food refuel in the parking lot so that he could sleep.  Once Canaan was back in action, we headed to the Bilingual Boulder, which is right beside an overlook with a bunch of picnic tables (we had a few interested spectators…).  We got on Bilingual (V2), which was Steve’s hardest outdoor onsight!  It went up a nice pocketed face and was enjoyable, but our group consensus was that it didn’t live up to the “classic” status it was given on Mountain Project.  Score another outdoor V4+ for me on Bipolar (V4+)!  Once again, the crux move was off the ground –  it was an awkward-until-you-figured-out-the-right-feet sit down start from undercling hands up to a nice crimp, reset the feet, then V1 land until the top.  Ben also did Lingual Arete (V2+), but the big move off the start was ridiculously reachy for me, and I didn’t want to put my shoulder through it.

We finished up our day in the Hive Boulder area, where there were several really nice lines.  We did Benadryl (V0) a tall line with a cool-looking coral type hold on it.  We did two lines on the left side of the boulder, but after consulting the description, it seems as though we may have done two different variations on Jaws (V1+).  Ben also did The Hive (V3+) and Drone (V4), and then worked Beastmaster (V7) for a couple of tries, but the rest of us were too worn out to do anything but spot.

Ben and Rachel were camping in a different area than we were, so we made plans to meet back at Listening Rock the next morning.  Canaan slept on the way down to the campground.  The little free-loader also used his nap to get out of setting up the tent as well as fixing dinner.  (I think we were both pretty psyched that he slept through it all so that we could get everything done quickly…).  After dinner we headed up to the little country store at the front of the campground, where Canaan was quite a hit with the ladies!  The park ranger that manned (womanned?) the store even gave him a Grayson Highlands onesie for free!  The campground also had live music that night, where we discovered that Canaan really DIGS bluegrass music!  He danced (mostly consisting of wobbly jumping) his little heart out until we were all exhausted, and we called it a night. 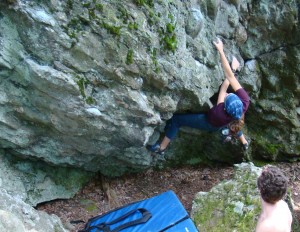 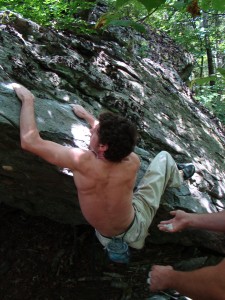 Day 2~
We started our day on the aptly named Warm-Up Boulder, where we did 5 problems, all ranging from V0- to V0+ (Horcrux, Inchworm, Center Crack, Hummingbird, and Split Crack).  Then we moved over to the next cluster of boulders down the trail, where we started on Mike-n-Ike (V0).  There was another group of folks there that we shared pads with for a little while.  We did the very aesthetic line Bicentennial Arete (V0), which was the 200th problem put up in Grayson (which was surprising since it was such an obvious line).  Ben and I had fun on Pitfall Traverse (V2), which was a really neat traverse that started on the right wall and finished by topping out on Bicentennial Arete.  My favorite line of the day was the slightly overhanging technical face climbing on Pit Fall (V2).  We looked at a few other problems, but our fingers were shredded (Rachel even got her very first flapper!), and our muscles were sore, so we hiked out around 3 or so.  After washing up in the Visitor’s Center, we headed home, and made it back nice and early just after 730.  Canaan’s highlight of the day I’m sure had to be sneaking his first taste of solid food – a fistful of dirt he was able to snatch on the sly after waking up from a nap (thankfully most of it got smeared on his face instead of in his mouth) 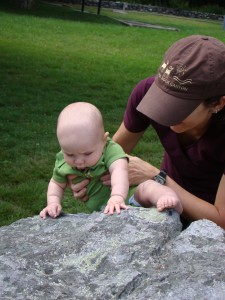 Canaan topping out on his latest project 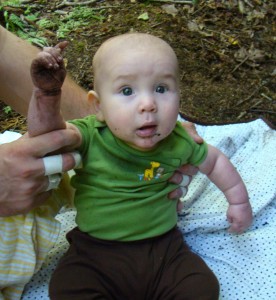 What a great weekend – beautiful scenery, not many crowds, and such a wide variety of boulder problems in lots of different grades!  We are already making plans to head back soon (which says a lot coming from two climbers who rope up probably 90% of the time!).  Bouldering also worked out really well with Canaan, since we were all usually on the ground (or close enough to it) at the same time.