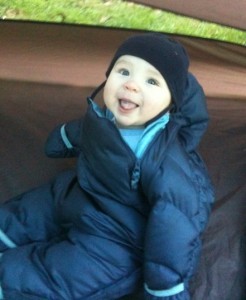 "Lets hit the road guys, its time to climb!"

With Canaan’s arrival this spring, Steve and I were way too busy to plan a big summer climbing trip like we usually do – so when our friend Christie said she had a few days off from grad school coming up in October and wondered if we’d be up for heading somewhere to climb, we jumped on the opportunity!  Steve had a business trip to Charlotte planned for the beginning part of the week, so on Wednesday afternoon, Canaan and I hopped in the car with Christie and Doris and made our way to Hickory, where we met up with Steve and grabbed a late dinner. 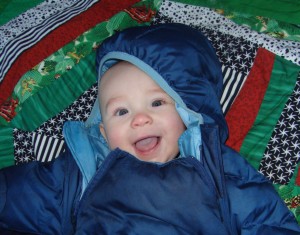 Canaan is evidently a morning person...

We stopped at a little RV campground right off the highway in Waynesville to spend the night, then were back out on the road again bright and early Thursday morning.  We drove through the booming metropolis of Wartburg, TN around lunchtime, and before we knew it we were at Lilly Bluffs with a long weekend of climbing ahead of us! 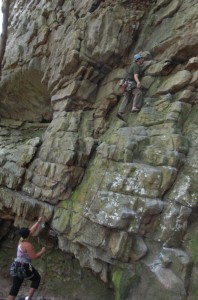 Choosing the Obed River as our destination was really the best of both worlds – Steve and I had been there  in 2008 with some other friends, so we were familiar with the area, and knew that all the approaches would be great with Canaan, and where all the classic routes were – but both of us are much stronger climbers now than we were back then, which made for plenty of new routes to put up! 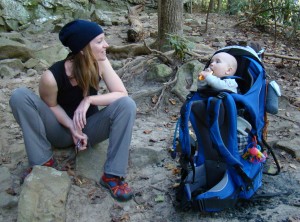 Our first day was spent at Lilly Bluff.  We started on the fun flakes of Rocking Chair (5.9) and the airy arete of Tarantella (5.10a), both climbs we’d done before and really enjoyed.  Then we got on Last Laugh (5.10c), which was probably my least favorite climb of the trip – awkward, reachy start and dirty at the top.  Before we had even left for our trip I had toyed with the idea of leading the mega-classic Heresy (5.11c), which I had followed (flailed?) my way up back in 2008. 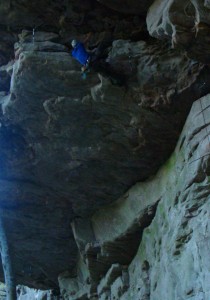 It is probably one of the most interesting routes that I’d ever seen, and I knew that it would be a good challenge for me.  Heresy consists of about 60 feet of vertical, technical face climbing, followed by a nice rest in a chimney before tackling a 25 foot horizontal roof!  (Plus the roof has fixed draws, so what do you have to lose?!?)   The interesting part is that the 11c moves are all on the face, while the roof only goes at 10c!  But being that the sun was getting low, we still had to cook dinner and set up our tents, a guy was cleaning it and offered to pull up our rope, AND the fact that no one wants to have an epic on Day 1 (READ:  I’m a pansy…) I opted to take the toprope option instead. 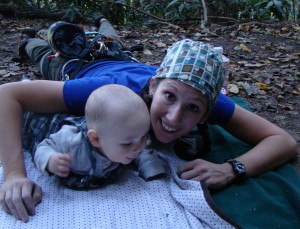 I was pleasantly surprised that I got through the entire thing clean save one fall at the crux. My memories of flailing on it before were erased and replaced with a new confidence so I made tentative plans to tackle it on the sharp end on Sunday before heading out of town. 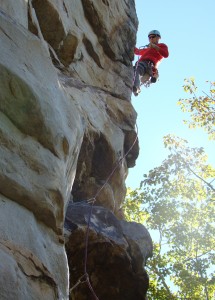 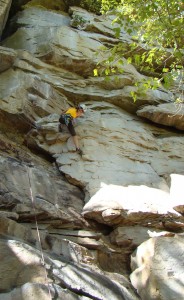 Even though we’d heard nothing but good things about Del and Marty’s climber’s campground, we couldn’t pass up the free camping along the Lilly Bluff trails right by the parking lot.  We put up our tents in the dark, and ate our dinner (cheesy scrambled eggs and rice!) by head lamp before retiring pretty early. 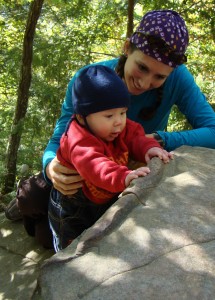 Our unofficial alarm clock (aka Canaan) woke us up the next morning right as the sun was peeking through the trees.  We had decided to climb at South Clear Creek for the day.  We warmed up on Shadowhawk (5.9), a very tall, sunny climb with a spectacular view of the river at the top.  Then we moved next door where I was thrilled to onsight Spawn (5.10c/d) –  a relentless, steep, technical face climb with two cruxy bulges thrown in at the top for good measure. 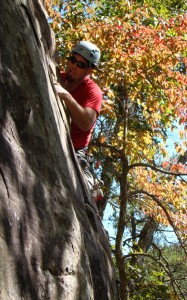 Next we headed over to Best Seat in the House (5.9+), a slabby classic with another great view of the river.  Double Feature (5.10c) was next on the tick list.  The start had a crazy bouldery start involving a lock-off on a two finger pocket (or if you’re like Steve you can skip the pocket and just dyno…).  The rest was lots of giant moves over various bulges between a series of flat ledges.  Again – thrilled with the onsight, especially considering how intimidating the start looked from the ground.  We ended our day with Nosebleed Section (5.10a), a blocky start with an exciting slab crux and a fun, exposed finish. 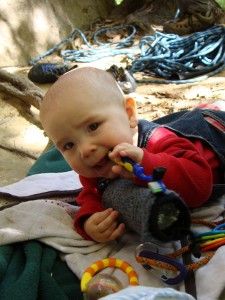 Canaan getting serious about his dental care.

We enjoyed ourselves so much at South Clear that we spent the next day there as well.  Christie snagged her first ever outdoor onsight on Super Ego (5.9) and then the ridiculously crimpy, low-roof start of Flight of the Ego (5.11b) fittingly ended my onsight streak from the day before.  (The rest of the route was really fun, however, and made the initial flailing worth it.  🙂 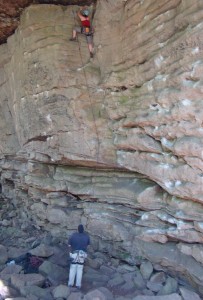 Christie onsighting It (5.10a)

We spent the afternoon in the Stephen King Library, stemming our way through the dihedral of It (5.10a), and trying to stay low on the steep slopers of Pet Semetary (5.11a).  It went down with no trouble, but after pulling the rope and falling 3 times at the same spot on Pet Semetary, (which was heartbreakingly 3 moves from the shutts), I gave up on the redpoint and filed it under projects for next time…We ended our day on Brother in Arms (5.10b), a casual romp up straightforward terrain until an exciting ending on a steep, crimpy slab. 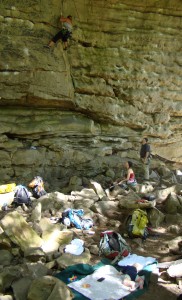 Doris on It (5.10a), with Christie belaying, Steve watching, Canaan sleeping...

Our final day dawned chilly but bright, and we motivated ourselves during breakfast with some Odub tunes from my iPhone before trekking down to Lilly Bluff again.  We started out on Blade Loafer (5.10a/b), a very intimidating-looking dihedral crack that ended up being loads of fun.  Then I went seeking redemption on Dinosaur, Jr. (5.10c), which I had hang-dogged my way up back in 2008.  The technical crux (a tenuous vertical slot before the first bolt) went down first go, and I plowed through the steep, pumpy, hand crack that had caused me problems the last time. 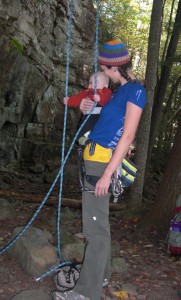 I was clawing my way up the plates to the finishing ledge when 4 days of climbing finally caught up with me and my foot popped – and I added another heartbreaking hangdog to my list of Obed routes in 2010.  Had we not had a 6.5 hour drive ahead of us, I might have pulled the rope and given it one more go, but all weekend long I’d been looking forward to hanging my own draws on Heresy (5.11c), and this was my last shot. 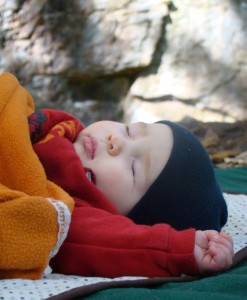 Clearly Canaan is not impressed with our efforts...

The face went okay – to be honest I felt a little spastic, and had felt much better on it the first day, but that was minus the mental game of leading it, as well as the Day 4 fatigue.  Not surprisingly I took a short fall moving over the bolt at the crux before making my way to the safety of the chimney for a rest.  Once I was coaxed out of the chimney (that first fixed draw looked so far away!) I got my heel up and into the rail and began the journey through the roof.  One clip down, two clips down, then I bobbled the third, but still made it.  I made it to the chains, cut my feet and swung the left heel on the other side of the point, but couldn’t find a clipping stance. 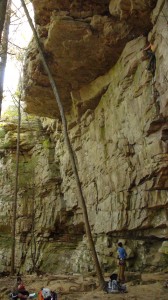 Christie luring me out of the chimney and onto the roof while Doris and Canaan spectate. 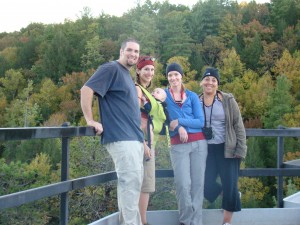 The Obed Crew - Steve, Me, Canaan, Christie, and Doris

I made a desperate throw for a jug on the other side of the point, but totally missed it and took a nice clean drop.  After a few boinking shenanigans Steve and Christie were able to haul me back up to where I was.  After a nice rest I was able to figure out a better stance, and easily made the clip on my next try.  YAY!

Steve decided to break out the video camera on a climbing trip for the first time since Utah…like I said the climbing is by far not the smoothest, and Steve is not completely satisfied with his videography, but nevertheless, here you have it – click here for the play by play of Heresy.

What a great ending to a fantastic trip!  This was Canaan’s longest climbing trip yet, and Canaan was the perfect cragbaby – the nights were cold, but he stayed warm and snuggly in his sleepy suit.  He is seconds away from crawling however (we were hoping he wouldn’t figure it out on this trip…), so we will probably have to revamp our “system” a little bit for the next trip!  We couldn’t have asked for better weather, and got tons of mileage on great rock.  It was encouraging to revisit routes we’d been on in 2008 and see how much we’ve both improved since then!  It felt really good to push myself on the sharp end again – I feel like my lead head is finally back to where it was before I got pregnant!  Plus, its always fun hanging out at the crag with good friends and a sweet little boy that makes my heart sing. 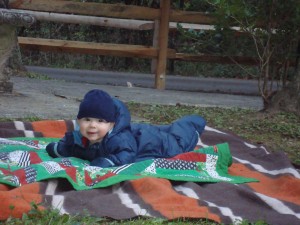 The only one of us who made the highlight reel every day...

11 Responses to “Four Days of Dirtbaggin’ in Tennessee”