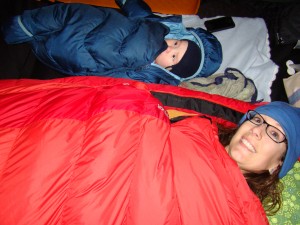 Who’s ready for some sending!!!

The beginning of October marks the start of one of my favorite times of the year – fall.  Warm days, cool nights, pretty leaves…and the Hound Ears Bouldering Comp!  For those of you that don’t know, Hound Ears is a private resort in Boone, NC filled with giant vacation homes.  The woods surrounding these gorgeous homes also just happen to boast some of the best bouldering in the region.  Though seldom taken advantage of by the residents, this rocky playground sits mostly untouched for every day of the year except for the first Saturday in October – when over 400 beanie-wearing men and women toting strange pads on their backs invade the peaceful neighborhood, speaking a strain of climbing jargon that is impossible to translate to the average listener without getting into ridiculous body contortions and inhaling more chalk than whats good for you. 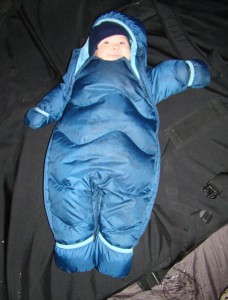 Look out for the Abominable Snow-bean!

We skipped the comp last year since I was pregnant, so we were especially excited to attend this year with the Bean in tow!  We rolled in to the campground with just enough time to set up our tent and socialize a bit before bed time.  C’s reputation obviously precedes him a bit – heading down to the main area he was greeted by “Hey its the TRC baby!”  We were a little worried about how our little TRC baby would do during the night, since our confidence in his tent sleeping abilities had been shaken by our last experience at Grayson Highlands – plus it was gonna be COLD!  At 6 am the next morning my phone said it was 39 degrees!  But even though this was the most extreme conditions C has ever camped in by far, he was a champ and didn’t make a peep until just a few minutes before our alarm was set to go off!  At this point I need to send a shout-out to Finn Millbern, who might just be the original TRC baby.  His family now lives in Germany, but they were nice enough to pass along his down sleepy suit to C before they moved.  Despite the cold temps, our Abominable Snow-bean stayed warm and toasty all night long!  Thanks Millberns, we miss you!!! 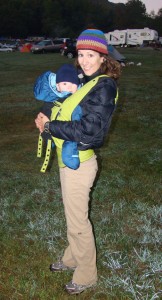 Our morning got off to a frosty start!

The morning dawned frigid but within hours the sun was warming things up as one by one we all loaded onto borrowed rafting company buses and shuttled our way up to the rocks.  After what seemed like forever, all the competitors had arrived and we were given the go ahead.  This year our core group consisted of John and Melanie Wilson, and Jeremy Sanders – all first time Hound Ears participants, so C wasn’t the only newbie!  You might notice that we are lacking the usual array of action shots – this is partly due to the fact that we were having too much chaotic fun to remember to break out the camera, but mostly because Manuela (aka C’s personal photographer) and Norbert  decided they’d rather be gallavanting around Italy instead of climbing with us.  I would say thats grounds for firing them both as friends, but their saving grace is that they were climbing in Arco, Italy, which is on my bucket list of climbing destinations, so I guess that makes it forgivable. 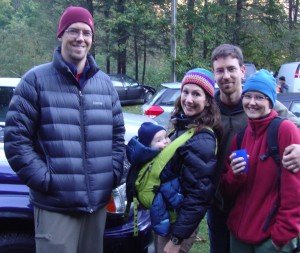 Jeremy, Canaan and me, John and Melanie

Steve and I were in different divisions, so we were working completely different problems.  To keep this blog under 5000 words, I’m just listing the problems that I did –  I figure its my blog, so I can do what I want!  I’m sure that if Steve really wants his version of the trip report posted, he can figure out how to put it on his blog…

We started out in the Champagne Area.  Since we fancy ourselves roped climbers rather than a boulderers, we warmed up on Champagne Jam (5.10), which is touted in the guide as the best crack in the high country.  It was 40 feet of lay-back loveliness (for me anyway – rumor has it that if your Bill Webster you can jam the whole way up).  Meanwhile the rest of the crew was working on stuff over on the Hamsling Boulder.  Since we were there and it was there, I decided to have a few go’s at Bleeding It Out (V5).  John had seen some other folks on it, and gave me the low down on the beta.  I took several attempts on it, not really getting very far.  I didn’t want to ruin my fingers for the rest of the day (if you’ve never bouldered at H/E – the holds are SHARP!!!), so I gave one last try – and sent my first ever outdoor V5!!!  Woo-hoo!!!  I was super-psyched, and C was so excited that he realized he needed to eat ASAP, so after a quick feeding break, we all packed up our stuff and headed over to the Air Jesus area, in search of redemption… 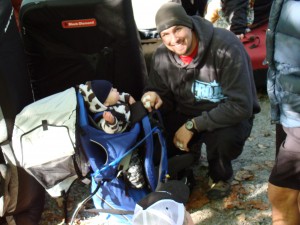 Steve and C waiting to start the Comp!

So a couple of years ago when I tried the lower start variation of Air Jesus (V4), I had no problems whatsoever with the harder start, but projected the first move off the V3 start until my fingers bled to no avail.  This time however, I sailed through the whole problem on my second attempt – and the last move to the “Jesus hold” at the top out is every bit as fun as everyone says it is!  At this point I realized that I probably needed to get rolling on the quantity as well as the quality of my score card, so I hopped on Roto Rooter (V1), a fun little highball along juggy rails with one giant move in the middle. 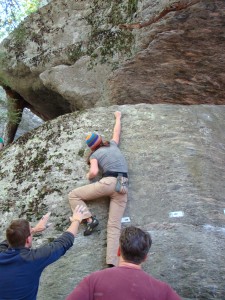 Thankful for the intermediate crimper on Ripper’s Direct (V2)

We decided to head up to the Main Area next, where there was quite a crowd – which meant plenty of spotters and plenty of pads!  It was also a nice, flat, open area, so we spread the blankets out and let C do some exploring.  He was quite popular (evidently we’re not the only ones that think he’s pretty cute) and had many visitors, including one of the H/E photographers who did an impromptu photo session with him!  In the Main Area I was pretty pumped to flash Ripper’s Direct (V2), as well as Iron Cross (V3).  Both had tenuous starts, then Iron Cross traversed in to Ripper’s Direct, and they shared the same looooong move to the top (thankfully there’s a small intermediate crimper for those of us that aren’t 6 feet tall!).

Our friend Allison had recommended I get on Damage, Inc (V5) in the Main Area.  I gave it a few tries, but kept getting shut down (we’ll blame it on too late in the day… 🙂  I’m glad I went up there though because what ended up being my favorite problem of the day was right beside it – The Claw (V4).  At that point we were all starting to slow down, so we headed through the Corridors to the Fire Wall, where we got on what is arguably the best of its grade at the boulderfield – The Guillotine (V0).  We also did Burning Arete (V0), a really nice line on, you guessed it, an arete. 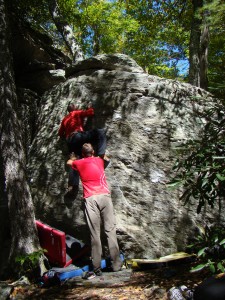 Jeremy and Steve working on The Dip (V1)

Time was starting to run out, so Steve, Jeremy, and I zipped back up to the Horseshoe Boulder to get the last few ticks on our scorecards.    I finished out my card on Horseshoe Nail (V2), and Blacksmith (V2).  Both are short and sweet with reasonable top-outs – exactly what was needed after a long day of crankin’ hard!  Cn was in desperate need of a diaper change, and was ready for his dinner, so we ended up being on the very last bus back to the campground.  We had tossed around different ideas of how to handle the evening.  Our original plan was to camp out again Saturday night and go for a hike the next morning before heading home Sunday afternoon, but it was supposed to be another cold night, and the weather forecast was only okay.   We knew C would never make it through all the festivities and prizes, and swapping out turns with a sleeping baby in the tent didn’t seem like fun, so we decided to go ahead and leave. 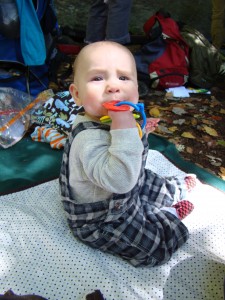 C was so exhausted after sending so many of his projects all day that he konked out on my lap on the bus ride.  He remained as limp as a dish rag while we said our good-byes, and only woke up to say good-bye to Scott Gilliam (who C is kinda partial to anyway, since he was his original NRG climbing partner…)

We spent Sunday recovering both body and mind, which included a 2 hour family nap in the afternoon.  When I woke up I had a facebook message on my phone from my friend Ben (who we met our first time at Grayson) telling me that I had placed 3rd in my division!  Woo-hoo!  I had been very happy with how the day had gone, having accomplished my goal of beating my previous year’s score, so placing was just icing on the cake!    For the rest of the results and some other photos from the day, click here.  Be sure to find Lee Kennedy, Bill Webster, Luke Howard, and Rami Annab in the results – they’re all fellow climbing buddies who also placed.  🙂  Also, if you’re not tired of clicking links yet, and you wanna check out my Climbing Magazine blogpost about Hound Ears, click here (its basically the same article but without all the personal shout-outs)

So what a great weekend!  And what better way to follow up that weekend than with a 4 day climbing trip to the Obed River in Tennessee later on in the week!  Steve’s got some vacation days to burn, we both have projects to send, and C has been itching to see Mommy and Daddy on a rope again so that he  can play with all that shiny and colorful gear!