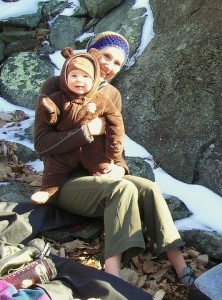 Some pre-climb snuggles with my favorite bear

Our house went on the market last Monday, and after a smattering of showings towards the end of the week, we got slammed with 5 requests for Saturday showings.  We figured since we were banned from our house for all but an hour here or there, we might as well get outside and enjoy the weather.  We decided to meet up with a few folks at Asheboro.  Since it was a gorgeous day, lots of other people had the same idea, so we ended up making several new friends as well as a Charlotte connection! 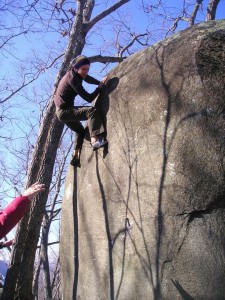 We didn’t get on anything new, but had fun on all the usual suspects – Lightning Bolt (V4), Seam (V0), Falling Up (V3), and Falling Up Arete (V4).  Somebody broke a key foothold off of the start Falling Up Arete, but thankfully the route still goes, although I do think its a fair bit harder without that right foot. 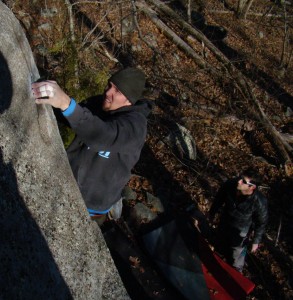 My new beta is to just to crank up on the left foot and let the right hang – which actually sets my body position up to make the whole problem flow a little better.  Our crew also did Quiver (V2/3), which Steve and I hadn’t gotten on in a couple of years.  I also found a new project for the day – Layoff (V4).  We ended our day by shedding some blood in the off-width warm-up cracks in the main area – really fun problems, but also fairly painful… 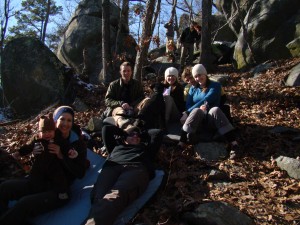 Can you figure out which one of us is mad because they were just told not to eat dead leaves?

Canaan spent the majority of his day being a ladies man.  He was quite the charmer, and by the end of the day, had quite the collection of girlfriends. 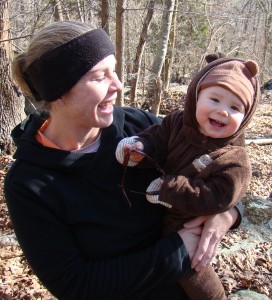 We assumed that Monday might be similar with regards to the house showings since it was a holiday, and since Steve had the day off from work, and we already had another partner lined up, we decided we might as well head back to Asheboro for another round, even though the weather wasn’t quite as nice as it had been on Saturday. 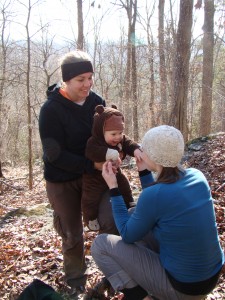 We were both feeling a little beat up from Saturday, and I’m pretty certain that another rest day would have been beneficial (especially since ironically enough, we ended up with ZERO showings…), but it was still a good day.  We did mostly the same stuff that we’d done on Saturday, in addition to getting lost on our search for the Outback Area and the Alien Head boulder.  We also did Get Up Stand Up (V2), then discovered that a huge chunk of rock is now flexing a bit on it… 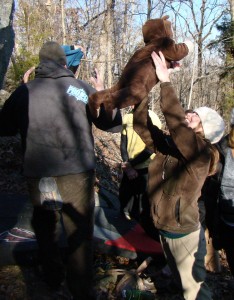 Canaan having fun with Miss Lauren!

Steve came heartbreakingly close to sending Dumbo (V4), which would have been his hardest send to date.  I think with some more work it will go for him. 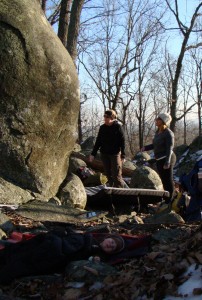 All that fun makes for a sleepy bear...

While Falling Up and Falling Up Arete went down very smoothly on the first go for me, I also did my fair share of falling down on Layoff as well as Quiver.   A couple of funky landings, but nothing a visit to the chiropractor and my favorite massage therapist the next day couldn’t fix.  Big shout-out to Jeremy Sanders for all of his professional spotting – I should definitely hire you out…or at least bake you some cookies.  Also thanks to Jean Adams for letting me snag some of her pics from Saturday!