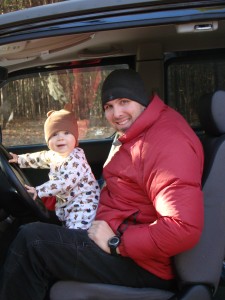 Until this past week, it’d been over 2 years since we’d gotten our friction on at the Asheboro Boulders – last winter I was pregnant and relegated to toproping, and the winter before that I had a bum shoulder.  But with a couple of breaks in the cold and wet weather streak we’ve been having, we managed to hit the ‘Burl twice – a few days before Christmas, and once more on New Year’s Eve. 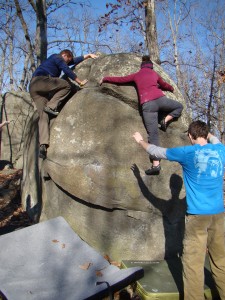 Jeremy and Marie warming up on the Monkey Boulder

Our pre-Christmas trip was timed so that it was a pit stop on the way to my parents house in Winston-Salem for the holidays.  It was also our first day back after a 6 week climbing hiatus to give our bodies an off season while we continued to prepare our house to go on the market in mid-January. 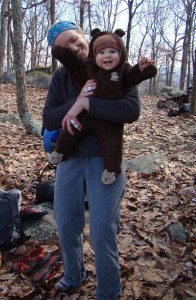 Steve and I were both pretty psyched about how the day went.  I think all the bouldering we’ve been doing this fall at various places has improved our confidence on the tall, Asheboro slabs – who knows, maybe we’re morphing into pad people?  It was Christie’s first time there, as well as her friend Victor’s, so it was fun to show them around.  After warming up on the Monkey Boulder (V0), Christie was psyched to get Classic Corner (V2/3), and I was happy that sending Lightning Bolt (V4) and Darth Vader (V2/3) took a lot less time for me this time around.  This was only Victor’s second time climbing outside, so he of course was thrilled to also get the Vader send.   We also got on Seam (V0) in the Vader Area before heading over to Johnny Quest (V2/3). 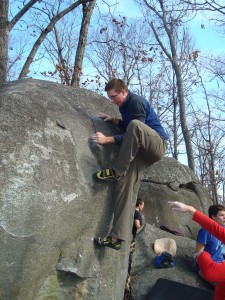 Jeremy high-steppin' it on "Get Up Stand Up"

We ended up hitting an Unknown problem on the way out – we call it Black Dish (there is a dark, indented dish at the top of the boulder, plus its right beside the Saucer boulder…)  No one we’ve talked to seems to know anything much about the line, but its a fun little romp up slightly overhanging sharp holds, and pulling onto a slab with a very thin finger crack.  It feels about V2-ish. 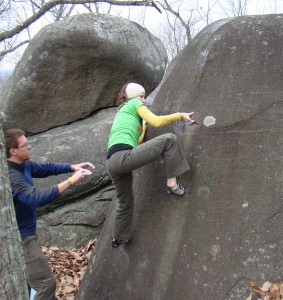 Starting the crux on Darth Vader

Steve climbed like a beast and sent Classic Corner as well as Johnny Quest – not only ticking two worthy projects from a couple of years ago, but also sending his hardest problems outdoors to date!  Hooray for Steve!   We ended our day a little early when the wind sent the temps spiralling downwards, and thoughts of my mom’s homemade mac ‘n cheese for dinner lured us back down to the parking lot. It was great to get back out to Asheboro again, and even better when we saw that the weather was going to be even warmer on New Year’s Eve! 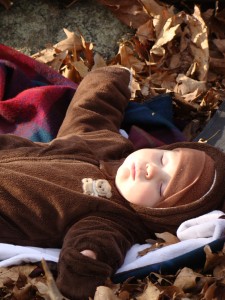 It sure is tough being a bear.

This time we managed to create quite a posse – Christie joined us again, along with Jeremy, Marc, Joe, and Marie.  Marc and Joe’s dad, Chris, even came out as our unofficial photographer!  We also ran into another friend of ours who we hadn’t seen in over a year, also named Chris. We started out at (where else?) the Monkey Boulder (V0)…and then of course hit up Classic Corner (V2/3) as well as Lightning Crack (V4). We also had a blast on Get Up Stand Up (V2), then Marc, Christie, and I all got shut down on Crimper’s Paradise (V5) before heading down to Darth Vader (V2/3) and Seam (V0).   This time we also hit up two Unknown lines below Vader, both V1. 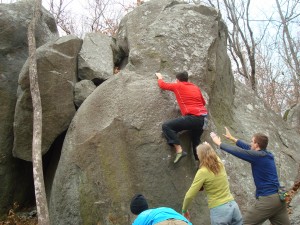 Steve on his redpoint run of "Falling Up"

We then moved over to the FUSP area, where it took me several flailings on Falling Up (V2/3) before I figured out that what Steve had been remembering as his beta was actually what I needed to be doing.  My highlight of the day was sending Falling Up Arete (V4). It started out with hands on the blunt arete and it was like a jigsaw puzzle trying to figure out which combination of bad feet to use for the start.  Once you got established at the start, there was a big move off of a high left toe to a perfectly-angled diagonal rail.  From there the problem moved towards the topout for Falling Up, but coming in from the opposite direction, which definitely felt less secure, but not overly dramatic. 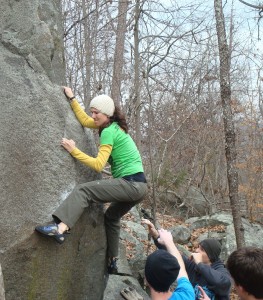 After some unsuccessful thrashing on Mike’s Mantle (V4), we headed back up the hill towards the Main Area where the rest of our bodies realized what our fingertips had known for awhile…the day was done.  Right before we left I did find a really fun crack line that I’d never done before – it also had some harder stuff around it that would be worth a visit next time around when the tips aren’t shredded. 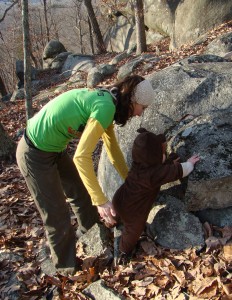 Who knew that little brown bears could boulder?

I can’t think of a better way to spend the last hours of 2010 than paddling my way up a sea of crisp slab!  Canaan was the perfect cragbaby – he went down easily for at least an hour in the morning as well as the afternoon – I even stayed back with him to wait for him to wake up at one point while everyone else packed up their pads and such and headed to a different area! 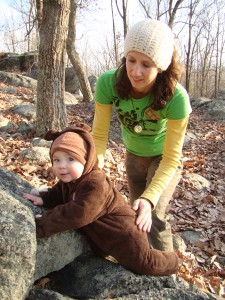 "Let me show you how its done, guys."

Even though the bear suit is harder for Canaan to maneuver around in, he still managed to get in some bouldering of his own – and our first time bringing solid food to the crag worked out superbly! And just when we thought our day couldn’t have gotten any better, we stopped at the only Rock-ola left IN THE WORLD on the way back.  Rock-ola will always have a special place in our hearts because it was me and Steve’s date night restaurant all throughout college and the early years of our marriage – in college we’d alternate between the Burlington one and the Raleigh one (and don’t forget the Winston-Salem one when we were home for the weekend!).  Once we got married, we alternated between the two Raleigh locations until they closed down, then we’d hit up the one in Garner – until one sad day a couple of years ago when our waitress told us that it was closing temporarily for renovations…and then it never reopened.  But the Asheboro location is still going strong – and the cheese fries were better than ever!  Good rock, good friends, and good food – it doesn’t get much better than that, folks! 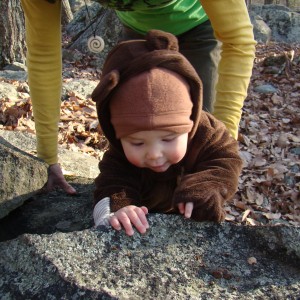 As with any serious climber, Canaan likes to dabble in basic geology.