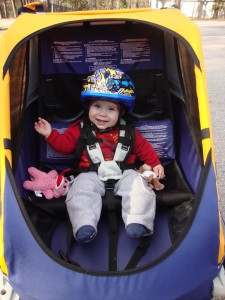 Our family recieved a Chariot Cabriolet Bike Trailer for Christmas this past year!  We’d read good reviews, researched the model that we thought would work best for us, and put it on our Christmas list – and we must have all been really good this year because we got not only the trailer but also a spare hitch attachment so that we can easily switch it back and forth between both of our bikes!  The only bad news was that we were itching to try it out, but high’s in the 30’s leave me less than motivated to hop on a bike and feel the wind in my hair… My hard core biking friends might disagree and point me to any number of technical apparel that might make those temperatures tolerable – but we’re a climbing family that bikes on the side, so when it comes to biking weather, we don’t force it. 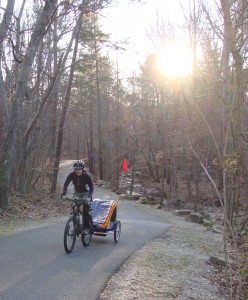 Anyway, this week we’ve had a freak warm streak in the middle of January in North Carolina that was too tempting to pass up.  So on Friday afternoon we loaded everything into the car and hit the greenway for our first test run with the Chariot, and our first bike excursion as a family!  The verdict – LOADS of fun!  The chariot worked out great for us as well as Canaan. Not only do kids love to ride this thing, dogs are never the exception when it comes to fun. Check out TreeHousePuppies for bike trailers that dogs will love! 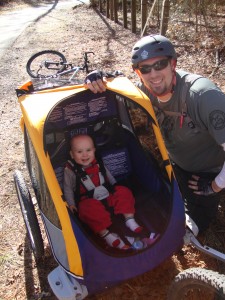 Time to switch to Daddy’s bike!

Of course nothing is perfect, so here are the CONS:

“This is fun Daddy, let’s do it again tomorrow!”

THE BOTTOM LINE: I think that the Chariot is a perfect fit for the types of biking our family enjoys.  Our main uses will be along mostly smooth terrain – paved greenways, fine-gravelled bridle trails and “rails to trails.”  I can see us gearing up for relatively short afternoon rides in the 10-15 miles range, as well as longer multi-day trips along the New River Trail in VA with fly-fishing and camping gear in tow.  I don’t think I would feel comfortable riding technical single-track with it – the Chariot is kinda wide for that, not to mention all the head bobbling and jostling that poor Canaan would have to endure!  There are also attachments you can buy to convert the Chariot into a jogging stroller, but we already have a BOB for that, so I don’t see us purchasing the conversion kit.  I’ve also seen pictures of folks trailing behind them on cross-country skis – how fun would that be!  Too bad our average snowfall is usually in the single digits around here…There are lots of really great PROS about the Chariot, and the CONS are nothing more than minor annoyances that are by no means deal breakers. 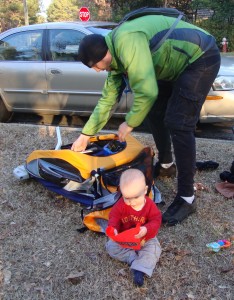 The best part about the Chariot is that it is allows our family yet another way to get outside and enjoy the Great Outdoors with our son.  Canaan had a blast tootling around in it – he was singing and chatting at passers-by almost the entire ride!  We are looking forward to using the Chariot with our family for many years to come!