Now that the weather has been so nice, we’ve been starting to line up some climbing trips for the coming months. Since our move to Charlotte a few weeks ago, we are getting pretty psyched about being so much closer to the rock. I’ve decided to put all of this newfound mental energy to good use and come up with a 2011 Hit List. I hesitate to call it a “Project List” because I don’t want to take it too seriously. I dont want to get caught up in the the overtraining, number-chasing, and ego-driven mentality that so many folks end up with when they take climbing too seriously. Climbing has always been a fun and creative outlet for me to RELIEVE stress, not add to it, and I have found that whenever I have the wrong mindset about it, it stops being fun (and I usually get hurt). But I am a firm believer in setting goals to track progress, and I know that goals tend to carry more weight when they are written down for others to see – plus I thought it might be nice to have some input from some fellow climbers to help tweak my list. 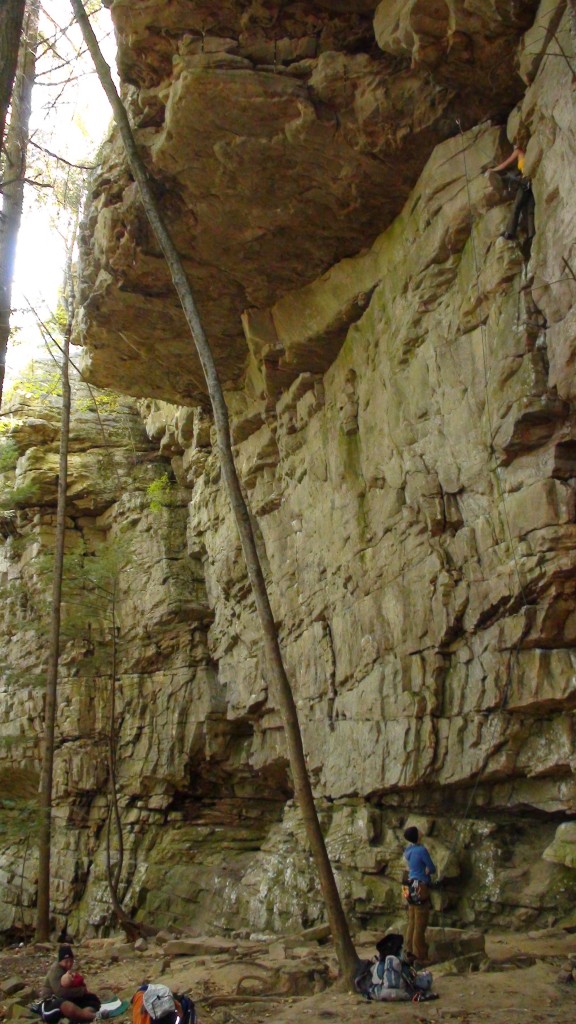 Enjoying the rest before tackling the roof on Heresy (5.11c)

Currently my list is still a work in progress. I am hoping to be able to add to it in some places and get more specific in others – and some stuff might get knocked off because it just doesn’t seem feasible a few months down the road. But here’s what I’ve got so far…

1.  Redpoint Heresy (5.11c) at Lilly Bluffs, TN – Crux is high on the face, the 25 foot roof at the end is only 10c, and there is a great rest before heading into the roof, not to mention fixed draws. I got up the nerve to lead it last October and made it through with only one hang at the crux, so I’m hoping that on my next trip out there I can send.

2.  Redpoint New Yosemite (5.9+) at New River Gorge, WV – Amazing hand crack as classic as its namesake.  Now that Cragbaby is here our multi-pitch days have ceased for the time being, so its been a while since we’ve gotten our rack out on a regular basis (and I also am kind of a pansy on gear…)  This was on my list to lead many years ago and I never got around to it.  I followed it shortly after C was born and felt really comfortable on it, so I’ve decided its high time I tie in on the sharp end for it. 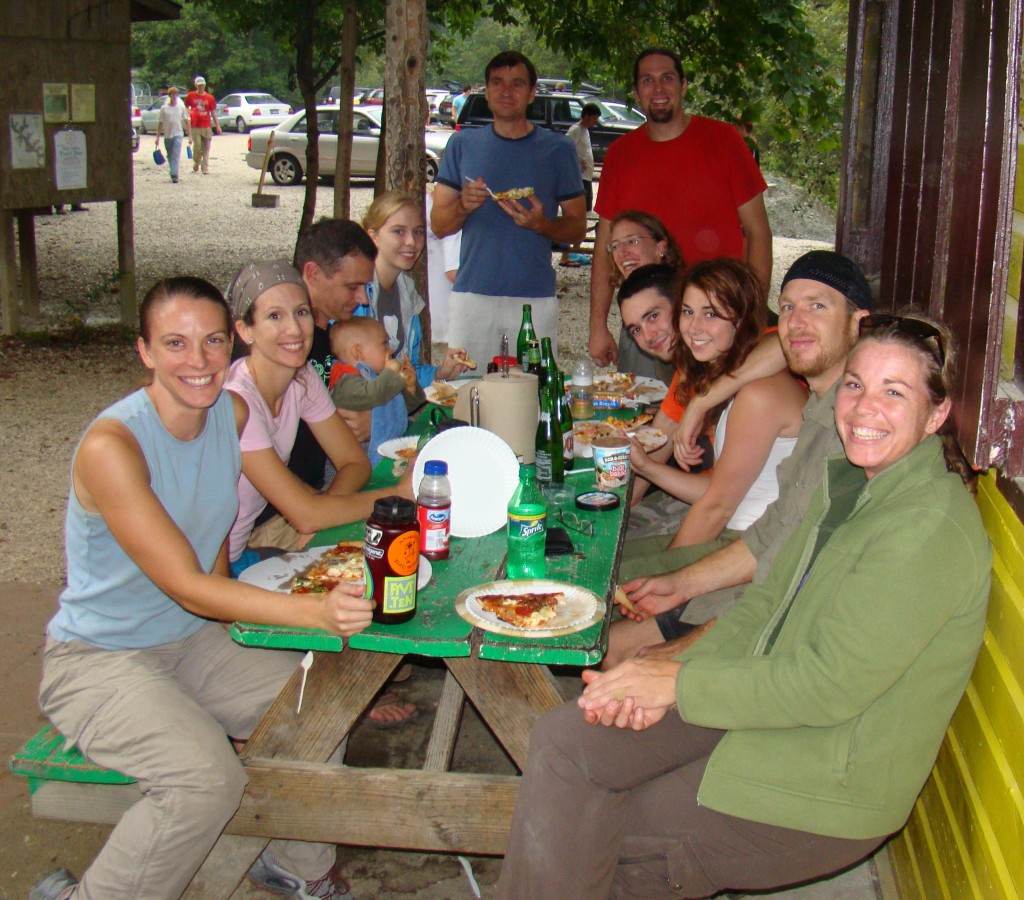 3.  Redpoint Discombobulated (5.11b) at New River Gorge, WV – Loooong classic sport route that has a little bit of everything.  Crux is fairly low on heinous credit card crimpers, the rest of the terrain is much easier but packs quite a pump.  Pulling over the bulge at the end is exciting with the wild exposure and big whippage potential.  I led it once a couple of years ago, took a couple of tries at the crux and hung on a couple of bolts to de-pump, but overall didn’t have too much trouble with it.  Then I led it a few months later when I was only 5 weeks preggo – and I flailed and flopped my way all the way to the bulge…and then bailed.  I swear I’ve never felt that exhausted in my life – that was my first lesson in pacing myself during pregnancy…Anyway, its about redemption now and I can’t wait to get back on it again!

4.  Find a Long-term Local Project – Possibly Slabsters Lament (5.12b), Crowder’s Mountain – This one may get waxed from the list pretty darn quick – I’ve never gotten on it, never even seen it, but a friend of mine suggested we work on it together.  I think it would be good to have a long-term local project that its easy to get back to and put in some work on.  Any suggestions for other routes at Crowder’s? 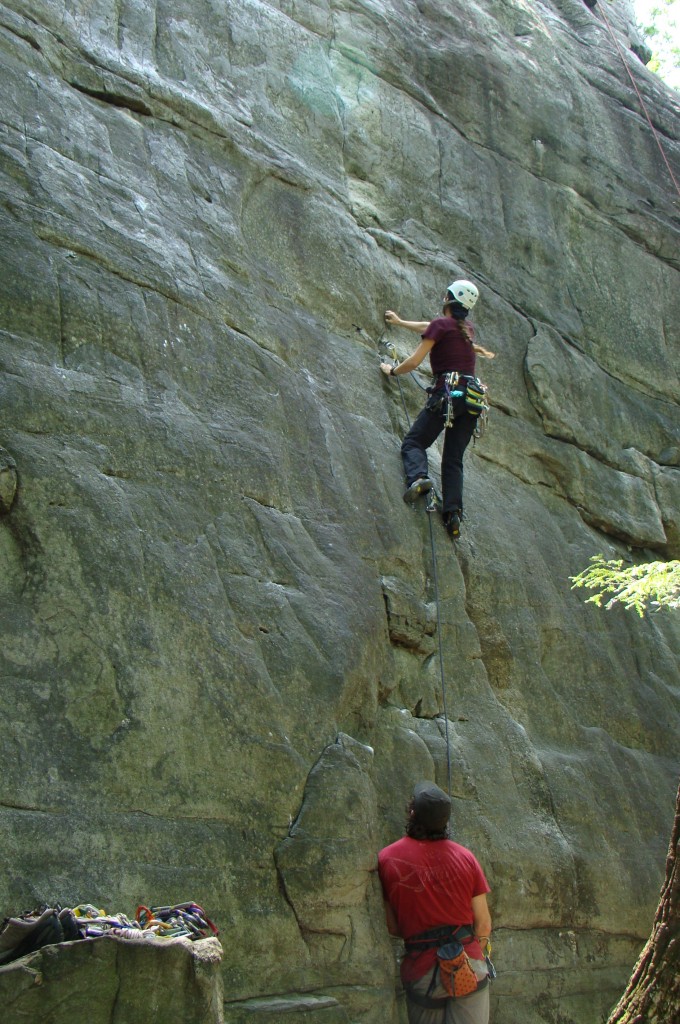 5.  Lead a 12a (Sport) – This could also play in with number 4, but I’m sure there are also good (and probably better) options at the New and in Tennessee.  I’ve never led a 12 before, so just leading it bolt to bolt would be an accomplishment for me.  Any recommendations?  I climb like the stereotypical girl – crimpers call my name, and thin, technical face climbs are my game!  No burly beefcake suggestions, please!   Which brings me to my next goal…

6.  Get Horizontal – okay mind out of the gutter, guys.  In the words of “Odub,” my favorite climbing rapper – “you gotta work those weaknesses at length until they become your strengths.”  I’ve been on the steeps in the gym all winter, trying to improve my overhanging skills, so my goal is to not shy away from routes in my grade range just because they aren’t “my style.”  I’m looking for a few classics in the 10+, 11- range that are burly jug-hauls with airy falls where I can utilize my Sharma scream.

7.  Climb in the following areas – Grandmother Boulders, NC (never been there, long story, wanna make it happen this summer), Red River Gorge, KY (only been once, and I was pregnant so I couldn’t lead anything, would love to get back there on the sharp end), Foster Falls and/or Tennessee Wall, TN (now that we’re closer to TN sandstone, we’re hoping to hit up Chattanooga at least a time or two this year). 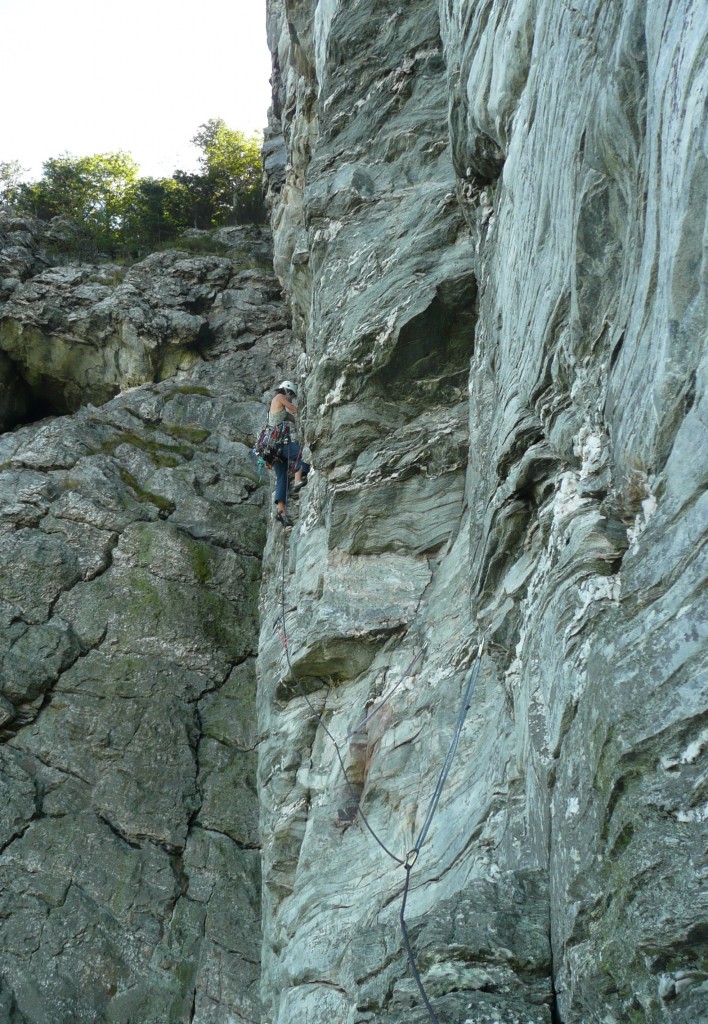 8.  Get Back into Trad – Goes along with number 2.  Though I’ve always been a sport junkie that only did the trad thing on moderates during rest days, I began flirting with a love for gear after a summer spent at Moore’s, Linville Gorge, and Squamish, BC a couple of years ago… but before one thing could lead to another, I got preggo and stopped leading.  I’ve led one trad route since Cragbaby entered the scene (Team Jesus, 5.10b, NRG), and it reminded me how much fun gear can be.  Multi-pitch is out for us for another year or so probably until C gets older, but I would like to do more single-pitch trad routes, especially cracks.

9.  Consolidate Bouldering Grades – I sent my first V5 outdoors this past fall at Hound Ears – Hamslung (V5).  It felt really hard, of course, but ironically didn’t feel like the hardest problem I’d ever sent.  It’s only been since Cragbaby’s arrival that I’ve gotten more into bouldering, so I feel a little all over the place with grades – It seems like one minute I’m flashing V4, only to get shutdown and unable to commit to a V2 in the same area.  I think the best solution for this inconsistency is just to get more mileage at grades of all levels and in lots of different areas. 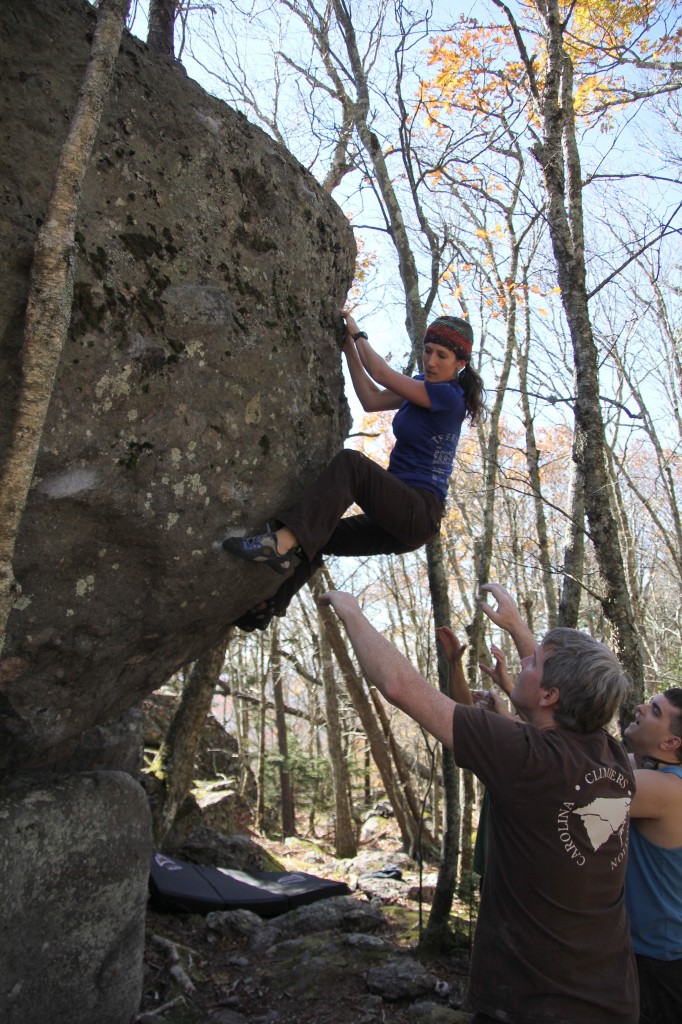 GHSP started morphing me into a pad-person last summer...

10.  Giving Back – Steve and I have been blessed over the years to have had some fabulous mentors along the way – Emil Briggs, Scott Gilliam, and Stephanie Alexander just to name a few.  It might sound a bit hokie, but I hope that at some point I’m able to influence others in a positive way with regards to climbing – whether its bringing a newbie outdoors for the first time, teaching a partner how to clean anchors, or sharing my experiences with the next generation of climbers (aka Cragbabies).