“Do you take less risks in climbing now that you’re a mom?”

If I had a dollar for every time someone has asked me this since Cragbaby entered on the scene…well let’s face it, I wouldn’t be rich, but I would definitely be able to buy more $4 frappucinnos at Starbucks!  The funny thing is, I never really feel like I have a good answer for this question.  I feel like the “correct” answer is, “Yes, the responsibility of raising a little person has made me less risky of a climber.”  But if I’m being honest, I don’t really think much has changed with regards to my risk assessment.  But before you start throwing stones, let me explain. 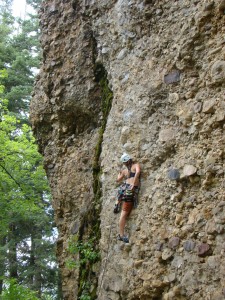 In a sport where certain mistakes can be fatal, no one can argue that rock climbing is a sport without risk. But with the advances in modern equipment, along with proper knowledge of that equipment’s uses and limitations, a lot of those risks can be mitigated to an acceptable level.  It’s not something I dwell on, but this concept of acceptable risk has been in the back of my mind ever since I started climbing, not just once C came along.  When my husband and I first started climbing in 2006, we had lots of discussions about risk and consequences.  We made a pact that if either of us was ever in a situation where our risk of danger felt higher than what we were comfortable with, we would bail as quickly and as safely as we could, no matter how many thousands of dollars of gear we had to leave behind, or how close we were to the summit.  That hasn’t changed since Cragbaby came along. 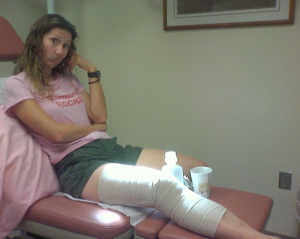 ....and a couple hours later in the Nephi Hospital (not having as much fun)

But enough about epic scenarios – what about everyday situations?  As far as the spectrum of climbers goes, some would probably say we were more on the conservative side to begin with, so again – not much has changed.  My risk assessments pre-Cragbaby as wife, daughter, and friend are still right in line with where they are now as a climbing Mommy.   I feel like my attitude can be for the most part be boiled down to one statement, and applied in different ways depending on particular situation.

BE OKAY WITH THE CONSEQUENCES OF A FALL.
Take the following scenarios for example.

1.  Topropes – If I or someone else that I trust has set up the anchor, I will gladly flail away on a toprope of just about any grade.

2.  Sport Routes –  If the route is bolted well and the fall zones are safe, I’ll go for it.  Yeah, I’ve taken a few nasty falls while lead climbing, including one that landed me in the ER on our first day in Maple Canyon a couple of years ago.  But it was a routine fall that I could take a million more times without incident – nothing “went wrong,” my belayer didn’t make a mistake…my knee was in the wrong place at the wrong time and bashed into a cobblestone that was jutting out from the rock. The consequences weren’t pleasant, but the experiences I had on that trip were well worth the stitches and brief weeks of physical setback. As my friend Brian wrote recently, “Sometimes we fall.”

3.  Trad – I am a self-proclaimed trad pansy. I am willing to lead a full number grade higher (often times even more) on bolted routes than I am on gear routes. In new areas, I tend stick to easier grades where I can place the gear I need in a (relatively) relaxed body position. If I’m gonna push myself, it’s going to be on a route on which I’m familiar and  comfortable with the gear placements, or a crack with obvious placements from the ground.

4.  Bouldering – It all boils down to the landing – if its well-protected with pads or spotters that I trust, I’ll go for it. If not, I don’t – simple as that.

5.  Free-soloing – No matter how comfortable I feel at the grade, or how solid the rock is, there are always factors out of my control – holds can break, swarms of bees can attack (it’s happened to me on a rope, I’m assuming it could happen without one too…).  Since I’m not okay with the fall consequences, its not for me – not pre-Cragbaby, and certainly not now! (Doesn’t mean that I don’t have several friends who choose otherwise, and more power to them – I’ll cheer them on with gusto.  But you won’t catch me doing it.) 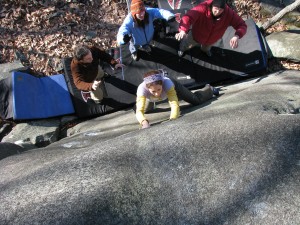 What a lot of non-climbers don’t think about when they ask me the “risk question” is that this concept of risk and consequences is not only applicable to climbing.  I’d be willing to bet more than a few of my aforementioned $4 frappucinos that each and every one of us makes decisions based on risk every day, whether it be consciously or subconsciously.   When you’re running late do you give in to the temptation of driving too fast, risking an accident, or do you stay the speed limit and risk being late?  How many of us think about the risks of getting on an airplane, swimming in the ocean, or not wearing sunscreen before we do it?  Most people don’t think about the risks to these everyday activities, but that doesn’t mean they don’t exist! 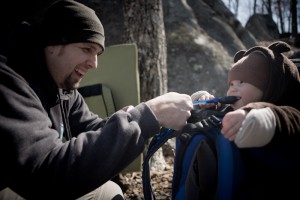 My most favorite people in the world (Photo: Jan Balster)

So has my attitude about risk changed since Cragbaby entered the scene?  Not really. Yes, he is one of God’s greatest gifts to me, but every member of my family is WAY more important to me than my climbing ever could be, so his arrival has merely solidified the attitude I already had on risk.  There are a lot of things about my life that I cannot control, but what I can do is evaluate my actions and choices, make sure that I can accept all possible outcomes of those choices, (both on and off the rock) – then commit to those choices wholeheartedly, and climb on!  🙂

22 Responses to “A Perspective on Risk Assessment”