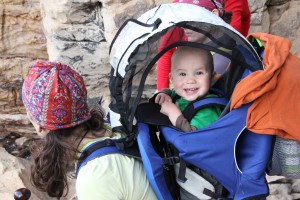 I’ve been to the New a countless number of times over the past few years, and the best part about it is that it never gets old!  No matter how many times we head up there, no two trips are ever the same, and this weekend was certainly no exception.  In fact, our weekend was chock full of “newness” – a new climbing season, a new drive, a new friend, lots of new routes, new gear, and of course a new hit list to work with. 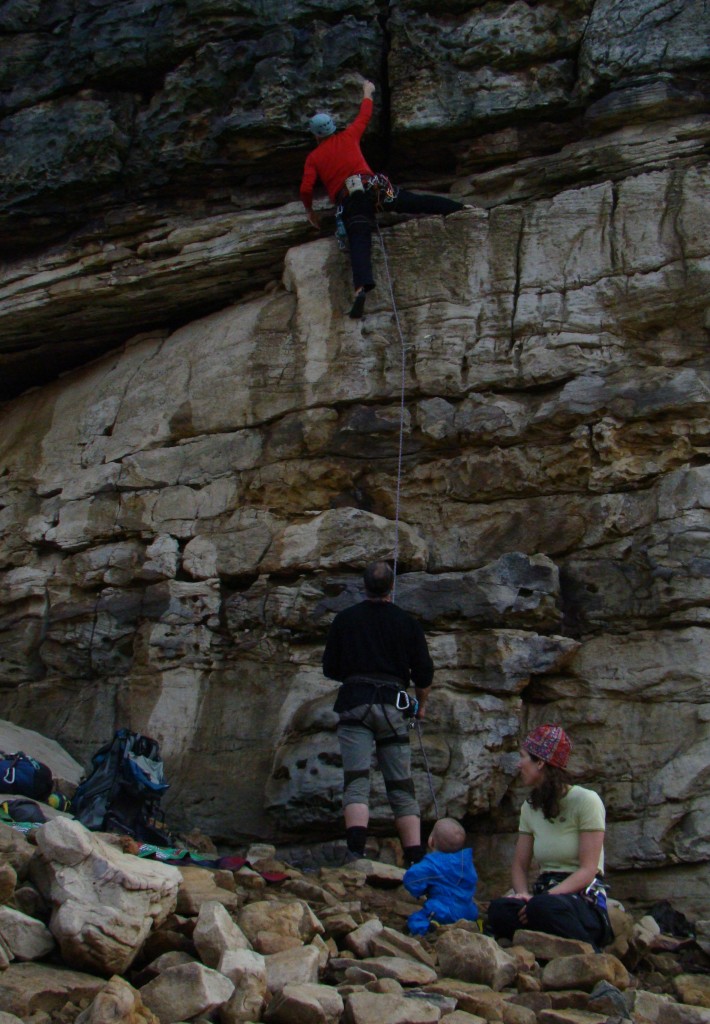 Steve putting up Bongo (5.7) while Cragbaby and Mommy look on

Our trip started on Friday afternoon, when Cragbaby and I picked Steve up at work, since his office was on the way out of town.  We were pleased to discover that the New is a little over an hour closer to our new house than our old one in Raleigh!  Even though we drove through a torrential downpour on the way up (b/c remember it’s not a trip to the New unless it rains…), it had thankfully stopped by the time we got out to set up camp.  I was a little worried about how Cragbaby would do sleep-wise – not only was it out first time camping since the fall, but we’ve been having some rough nights recently due to some molars that are making their presence known in a rather painful, inflammatory way. 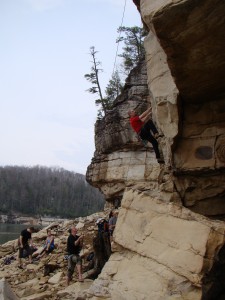 But, much to our delight, C felt right at home in the tent and slept great both nights (which meant everyone else in the campground slept great too – or if they didn’t it wasn’t our fault at least!) 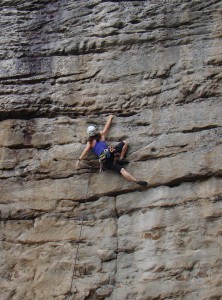 Thankful for a juggy ledge to shake out, high on Masuko (5.11a)!

Our co-  conspirators were Norbert and Manuela (aka Manbert) and their friend, Donna, who doesn’t climb, but came along for the camping/hiking scene.   (You might notice that our pictures are better this time…they always are when Manuela’s around!)  We started our morning out at Whippoorwhill on the recommendation of a friend, which was a completely new area for us.  The good news was that the scenery was just as spectacular as Summersville Lake, but with a quarter of the approach time.  The bad news was that everything was sopping wet.  I have to admit I was pretty disappointed when I rounded the corner and saw all the seepage, but upon closer inspection we found plenty to keep us occupied until mid-afternoon when the skies opened up.  Here’s what we played on out at Whippoorwhill… 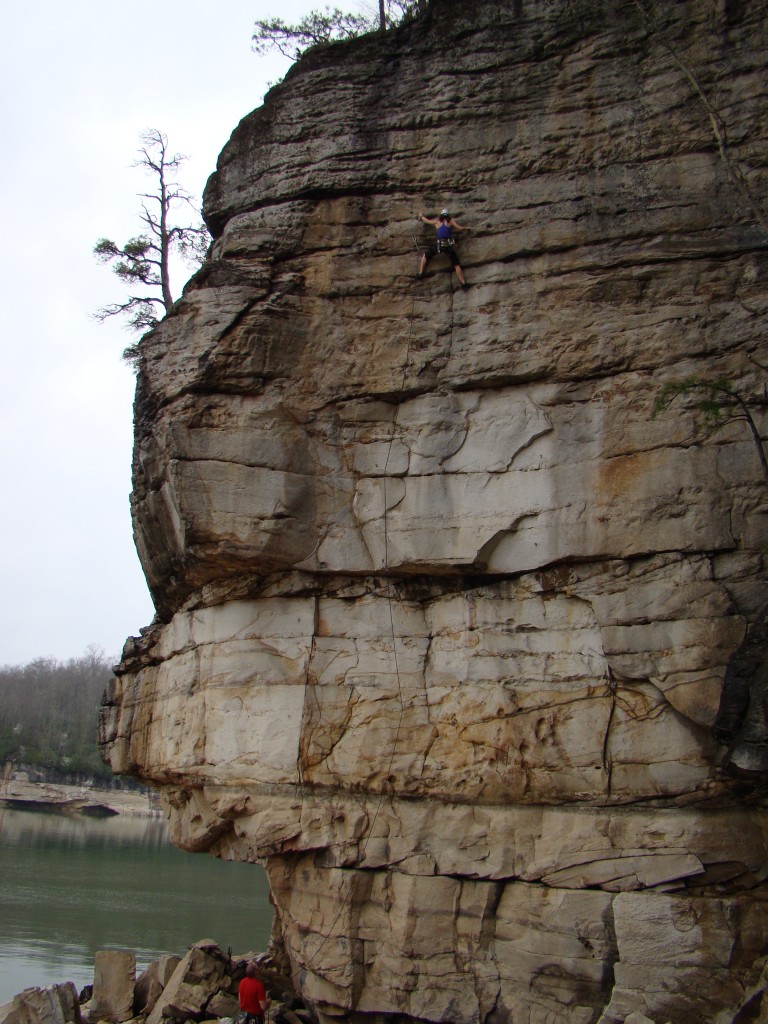 Bongo (5.7) – A casual romp up mega-jugs made slightly more exciting by some wet sections.  Thankfully the holds were big enough that it didn’t matter.
Cowboy in the Dirt (5.8) – A slightly harder version of its next door neighbor.
Gimme a Clown (5.9) – A bouldery start led to a wet (but safely protected) crux sequence involving a crack.  Felt a little tricky for the grade, but I’m sure the water didn’t help.
Masuko (5.11a) – A tall, proud, and relentless line – long, technical reaches to good holds.  Pumpy, sustained climbing for 70 feet made it feel pretty stout for the grade.  I felt strong through all the moves but ran out of steam and had to hang at several of the upper bolts.  It also didn’t help that a few key holds were a little damper than I would have liked up near the top.  I’d originally planned on pulling the rope and leading it again, but by the time Steve had finished up his top-rope lap, it had started to rain, so I figured the safer option would be to clean it on top-rope.  This time I was able to climb it clean, so hopefully a redpoint isn’t too far away – however it’ll have to wait til the fall, since by the time we get back to the gorge again in a few weeks, the base of the route will be underwater.  Oh well – a redpoint run on a classic route such as this is worth the wait! 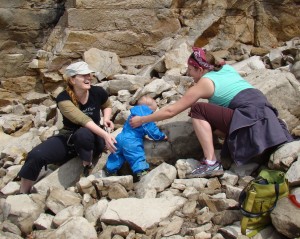 Cragbaby showing off for his two lovely spotters!

You wouldn’t have thought that a dry (but muddy from rain) lake bed strewn with rocks would make for the best Cragbaby environment, but it seemed like he may have had the most fun of all!  He was smack dab in the middle of a bunch of rocks perfect for a little Cragbaby to practice his own sends!  This day was also our first time testing out his new rain gear – the “Adventure Suit” from Oaki.  This piece of gear was INVALUABLE this weekend – I would whole-heartedly recommend it to any parent with young tykes (for those interested, I’ll be posting a gear review on it as soon as I get a chance!) 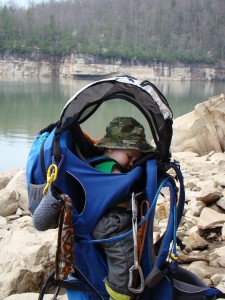 Too much bouldering makes for a sleepy Cragbaby...

After a rainy family photo-shoot and a wet and wild hike out, we made it to Pies n Pints for an early dinner.  The last band of rain moved through just as we were finishing up our pizza, so we wrapped up our evening around the campfire, where Cragbaby got his first taste of s’mores before konking out in the tent.  There was a steady breeze throughout the night, so when the next morning dawned bright, we were optimistic that we’d be able to find dry rock. 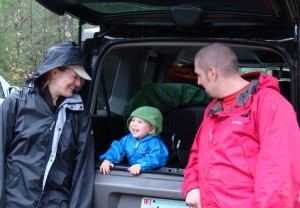 C enjoying the campfire view from a close but safe vantage point!

The hike down to the Head Wall at Bubba City was anything but dry, but thankfully, there were plenty of routes that were!  Here’s what we got on… 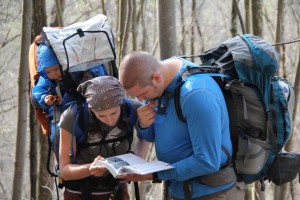 Mommy and Daddy scoping out routes on Day 2 at the Head Wall (C scoping out his baby-sized cordelette).

Chuckles (5.8) – The only route of the entire trip that wasn’t new to us, but we hadn’t been on it since our early climbing days when we’d both flailed on it, so it was nice to finally make it back there and earn that redemptive redpoint!
Bubbabooey (5.11c) – There was kind of a run to the 2nd bolt, so I opted for the toprope (the route shared anchors with Chuckles).  It ended up not being that big of a deal, I think another time I’d feel find leading it.  A thin, technical slab at both top and bottom, with a few core-intensive slaps up a blunt arete in the middle (crux). 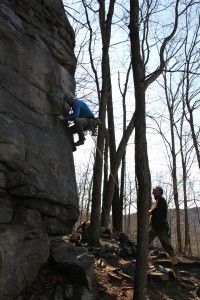 Hubba Bubba (5.9) – We’d hiked by this route several times, but never stopped to do it.  A really interesting line with a heady traverse along a horizontal hand crack on smeary feet down low, with spectacular exposure on the airy arete at the top!
Skinhead Grin (5.11b) – Still a work in progress…Technical down low, with a cobbled roof and crack sequence in the middle, to….I dont know what the top was like b/c I got shut down getting established up over the roof again and again and again…and again.  I lost track of how many times I peeled off (clean falls with nothing but air!), but no one can say I didn’t go down fighting, and at least I got to practice my Texas rope trick skills to get my gear back! 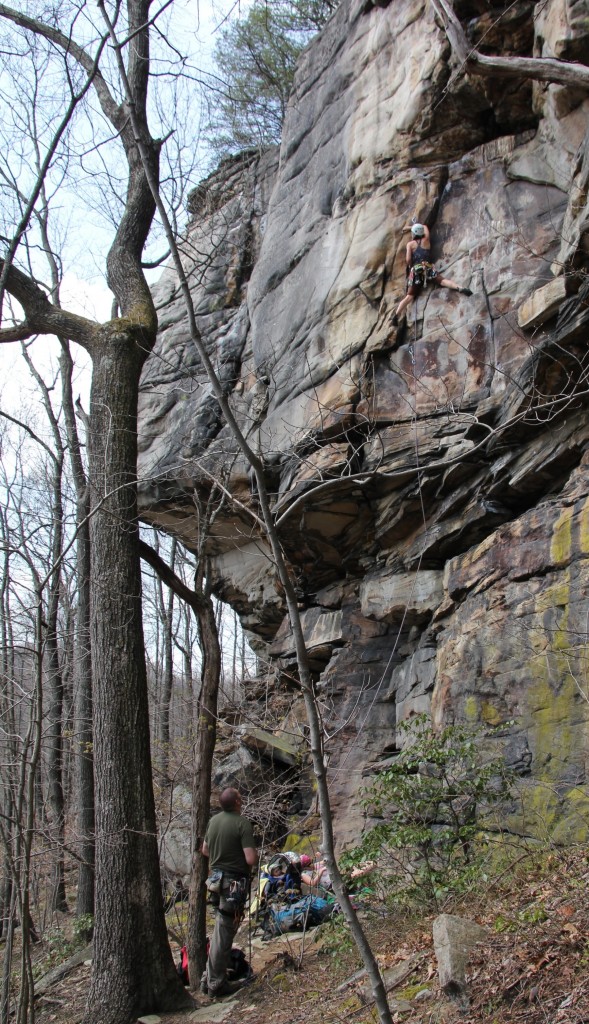 Because our original plans were thwarted by the rain, I didn’t get to tackle as much of my Hit List as I’d originally intended (although Skinhead Grin is definitely a step in the right direction for Goal #6), but I left with that motivated feeling that comes from pure, exhaustive fun!  It was really cool to try so many new routes – it made me realize just how much climbing there is to be had up there, and makes me excited about all the adventures that are to come this summer!  It had been way too long since we’d climbed with Manbert, and it was great hanging out with Donna as well!  It was a great balance between the comfort and familiarity of an area you’ve been to many times coupled with the excitement and discovery of a new place!  Thanks to Manuela and Donna for taking so many great pictures – if ya wanna see more, click here to hit the gallery… 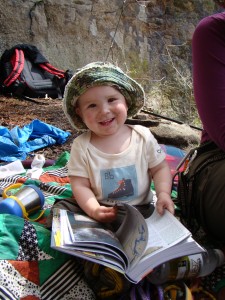 C sporting his "B is for Boot" onesie he won from Mountain Mama!