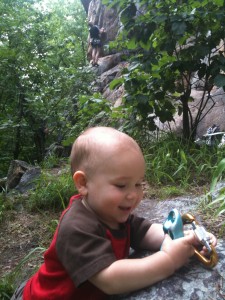 Cragbaby making sure my ATC is in good working order while Daddy gets started on Top That Direct (5.10b)

After a long week of working our tails off unpacking boxes, moving furniture, hanging pictures, and organizing shelves and drawers, we decided to reward ourselves with some climb time at the crag on Sunday afternoon.  One of my favorite parts about our new location is that we now have a local crag that is actually “local,” instead of 2 hours away!  So Sunday morning we got up leisurely, headed to church dressed in our climbing clothes (which by the way I also love – a church without dress codes…), and then were out at the crag by 1130 or so.  We met our friend Bennett at the Hidden Wall, a small sport crag way off the beaten track at Crowder’s Mountain.  Probably 99% of folks climbing at Crowders are out at the Main area, battling the sun, mosquitoes, and poison ivy patches amongst throngs of hikers, gawkers, and meetup groups – not that the Main Area doesn’t have its own charm.  We certainly had a spectacular day the last time we went (you can read about it here).  But for a quick afternoon fix, we needed the road less travelled by. 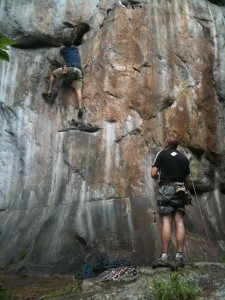 Enter Hidden Wall – a steep, shady, secluded area that most folks don’t seem to know about , even though the majority of the routes are listed in the NC Select Guidebook.  Hidden Wall is on the other side of the park from the Main Area, so it has different parking (and a much milder approach!).  Except for a few token warm-ups, most of the routes there are harder 5.11’s and 5.12’s.  There are even a couple of 5.13’s.  The climbing is stout – burly, sometimes awkward sequences on sharp rock, often involving tenuous clipping stances.  Not the kinda place you’d want to take your local boy scout troop. 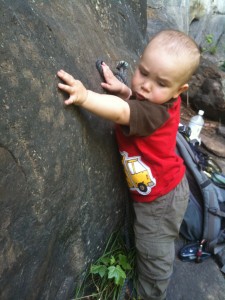 Cragbaby concentrating on foot placement (notice the rope he's pulling up with his right hand...)

Here’s what we did:
Top That Direct (5.10b) – Good warm-up for the wall…also my only onsight of the day…
Slabster’s Lament (5.12b) – When Bennett hung the draws bolt to bolt, it became obvious that there were two cruxes – clipping the last bolt, and clipping the anchors, so I decided I felt more comfortable following rather than leading.  The bottom section was really enjoyable moves on thin feet and good pockets, but it was quite a burle-fest moving past the steep, giant, sloping flake towards the finishing pockets.  I struggled my way through, the hardest part being getting back on the wall each time I peeled off, but eventually I made my way to the top.  I think I did all the moves, but there were a couple of times that I had some toprope assistance…
Freuhlein (5.11a) – Took several tries to figure out how to grunt my way up and over the awkward roof on holds that seem like they’re all facing the wrong way.  Now that I know the beta, I think next time I won’t have any trouble.
The Whining (5.11d) – The hardest thing I’ve led to date, so it’s not surprising that I got shut down on a super long move at the crux.  I was slapping all around the next tick mark, but just couldn’t get the right combination of oomph and reach to make it there.  Bennett gave it a go after me, and found an intermediate hold that I might be able to use another time – he made it a couple of moves farther, but couldn’t make the next clip, so we bailed off of the leaver biner we’d snagged off of Slabster earlier. 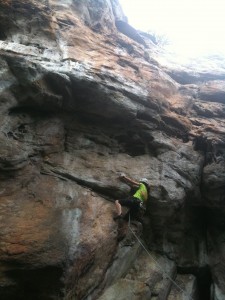 One move away from being shut down...

I definitely wouldn’t say that the climbing at Hidden Wall caters to what Steve and I are good at – but I think climbing there will definitely make us stronger.  I love that the area seems so remote, and that the base is nice and flat with plenty of safe room for Cragbaby to explore.  I’m not used to a “projecting” type of mindset (usually I like to get as many climbs in as I can during the day, rather than work the same thing over and over).  But since we now have local rock that is so close, this seems like the perfect place to find some long-term projects.  To be honest, I left the crag feeling a little dejected and licking my wounds about all the exhaustive flailing I did.  But after an Oreo Frosty and a hilarious round of peek-a-boo in the car with Cragbaby, followed by a nice warm bath, I feel satisfied by my efforts and motivated to come back in a few weeks!