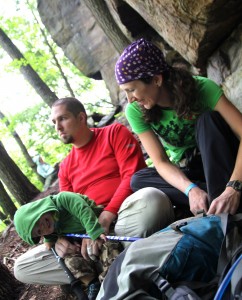 Goofing around at the Bubba City cliff base.

After skipping last year’s ‘Vous b/c Cragbaby was still really new on the scene, we were back this year, this time as a family that was bigger (and I like to think C has made us better…) than before!  The weather was great – the driest trip to the New we’d had in a really long time!  We had a whole posse of friends that met us up there, ran into tons of folks we hadn’t seen in a long time, and of course met lots and lots of new friends! 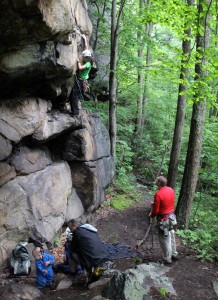 We rolled in just before dark on Thursday night and were surprised to find our favorite camping area away from the all the hubbub was almost full – thankfully our friends that had arrived an hour before us saved the last available space for us and our giant orange tent (which I heard passers-by commenting on one night, unaware that I was inside laying a sleeping Cragbaby down in the portable crib that takes up the majority of our tent space…) 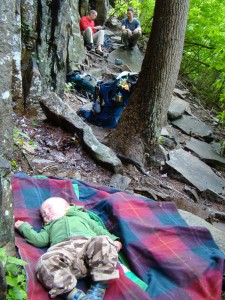 Steve and John getting ready for Clean Shaved (5.11d) while Cragbaby rests up for the party later!

We headed out pretty early the next day and hit up The Decameron area of Bubba City, which we figured was a decent bet for crowd control, and we’d also never climbed there before.  After some shenanigans figuring out where the correct route was (don’t ask…), we ended up with a great day!  Here’s what we did: 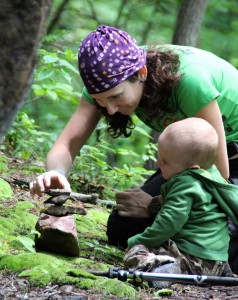 C getting a lesson in cairn-building!

The Decameron (5.10b) – A long, beautiful line with fantastic exposure and views of the river from up top!  (And best of all, I didn’t forget to look!)
ISO 9000 (5.11b)
Centennial (5.10b)
Booby Prize (5.10d) – I went up one more bolt than what the guidebook says before traversing right to the shared anchors with Clean Shaved, and this seemed to not only flow a lot better, but also had a lot less swinging potential on a fall.
Clean Shaved (5.11d) – Kind of a two move wonder…but those two moves are really HARD!  Flailing commenced… 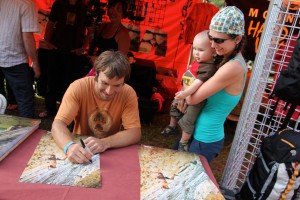 Cragbaby getting his very own autographed poster from Chris Sharma!

Saturday was all about Endless Wall, and was by far my favorite day!  We took Cragbaby down the Honeymooner’s Ladders for the first time (look for a blog post on ladders and babies coming up soon!) It was rather less than climactic for C, considering that he was fast asleep in the backpack the entire time…
Muckraker (5.11a) – Not a grade that I usually like to warm-up on, but its one of the easiest sport lines that’s any good, and since its a technical slab, you don’t have to worry about any sort of flash pump from starting out too hard. 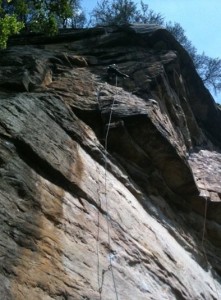 Up high on Discombobulated (5.11b)

Discombobulated (5.11b) – For those of you that have been reading for a while, you might remember that this route and I have a bit of a history, and that Goal #3 on my 2011 Hit List was to redpoint this route –  I say “was” because I sent it first go this time!  I had expected it to take at least 1 or 2 tries to work out the heinous crimpy crux right after the first bolt, but even after I made it through feeling really solid, in the back of my mind I was prepared for a heartbreaking whipper pulling the roof 5 feet from the anchors, especially with all the buzzing distractions everywhere (never saw a nest anywhere, but for some reason bees were swarming all over the place!)  After the flail-fest this route put me through a couple of years ago when I was 5 weeks pregnant, I am so happy to send it this time around! 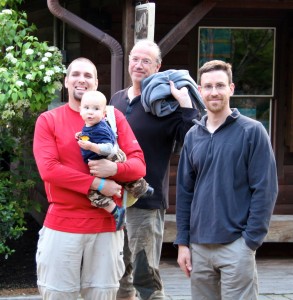 The boys after a manly dinner at Smokey's

Homer Erectus (5.12a) – I’d been on this two other times a couple of years ago, and had always traversed right at the 8th bolt, which keeps the grade at 11b.  This time, however, I decided to try my hand at the direct version, which went at 12a.  I fell a couple of times moving over the bolt, but eventually I was able to link together the sequence and finish out the route.  This brings me to Goal #5 for 2011 – leading a 12a.  So I guess technically I could check that one off too…but somehow it seems like kind of a copout to do so, since this was only a couple of moves of 12a, and its not even the most popular way to do the route…I figure I’ll wait to check that goal off til I can do it with a more legit route.  🙂 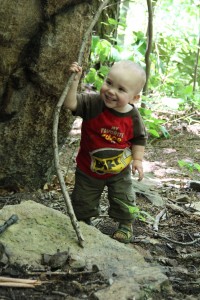 A sweet boy cheering on his Daddy on Homer Erectus

On Sunday we decided to check out a new area – Cottontop.  It was a good idea in theory, but what we didn’t know was that the area seeps (big time), so even though it hadn’t rained in days, EVERYTHING was sopping wet.  Unfortunately by the time we had driven out there and hiked in, it was too late to head anywhere else, considering the wide range of abilities within our group as well as the long drive we had ahead of us later on that afternoon.  At first glance, Cottonhead (5.10d) appeared dry, so I headed up.  However the last 3 holds were all but dripping, making it impossible to clip the anchors (but making for some fun rides trying…)  I ended up stick-clipping the anchors so that everyone else could give it a go and we could get our gear back.  Steve did something similar with Bio-Slab (5.7) so at least everybody got to climb something, but it was definitely a shame that we didn’t know what the conditions would be like – we could have climbed on dry rock at any number of other places.  But I guess it wouldn’t be a trip to the New without at least one day of wet rock… 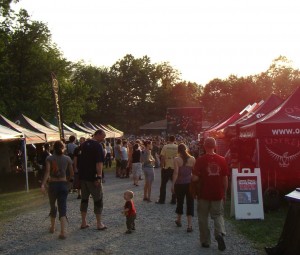 C and Norbert heading off to find some booth babes.

Our family has certainly come a long way from Cragbaby’s first camping experience (which ironically was exactly one year ago this week!)  Steve and I were both in awe of how well he did the entire weekend!  I was afraid that the loud party atmosphere was gonna be pretty hard on such a little guy by Day 3, but C not only slept through all the music, shouting, and car horns literally right outside of the tent EVERY night (which is more than I can say for myself!) but also proved wrong everyone who says babies ruin a good party!  Even Maura from Water Stone Outdoors told me that “No one had had more fun this weekend than that baby!” 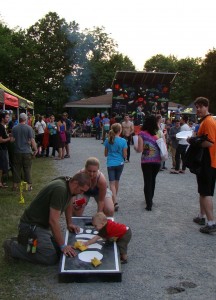 C showing Steve and Tori the rules of Cornhole

I must admit that part of me had been afraid that a Rendezvous with a little one meant missing out on a lot of the usual fun, but when I look back on it, Cragbaby fit right in… By day he hiked, climbed on rocks, and fiddled with gear, and by night he danced, flirted, clapped, and celebrated til he dropped from pure exhaustion – just like Mommy and Daddy!  I guess I shouldn’t be too surprised that the apple didn’t fall that far from the tree – and it probably goes without saying that all three of us are looking forward to doing the whole thing again next year! 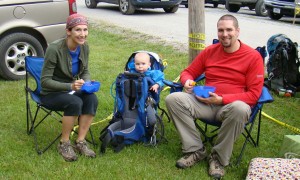 A quick breakfast before heading out on the last day

Oh yeah – and of course thanks as always to Manuela for capturing so many great memories of the weekend on camera, as well as John Wilson. (I must have been having too much fun, because I hardly even took the camera out…) As usual there were way too many good pics to include all of them on the blog, so if you wanna see more, head on over to the photo gallery.