Last summer we spent a good deal of time bouldering up at Grayson Highlands, VA.  Its an area that has seen smatterings of activity for many, many years, but only in small pockets of the park.  In recent years, this park has seen a resurgence in development, due mostly to my friend Aaron Parlier, who we met out at Grayson last summer.  Aaron is in the process of writing a guidebook for the area, hoping to have it in the hands of the publisher by the fall.

On the day that we met Aaron, we also met Daniel Caudill, who is a film student at Virginia Tech.  He had been documenting the development of bouldering at Grayson for a few months, in hopes of having enough footage to make a documentary film.  Last week Daniel was finally able to enjoy the fruits of all of his hard labor at the Progeny Film Festival, where his film, “Parlier’s Project,” took 1st place in not only the Best Picture category, but also the People’s Choice Award! 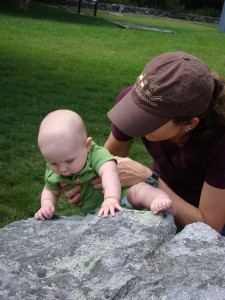 GHSP has something for everyone - even Cragbaby!

Daniel’s film talks about the history of the park, while capturing some exciting first ascent moments, showcasing some classic problems, and providing and an intimate look into the culture of the climbing community.  After the film festival, Daniel released it on Vimeo for the rest of the world to enjoy.  Its about 15 minutes long – the perfect length for our family to enjoy watching it over breakfast one day last week.  Imagine our surprise when we saw ourselves in it at several points!  We had signed photo releases for Daniel that day in the park, but to be honest, we’d kinda forgotten about it until we saw the video!  You can check us out around the 5:40 mark, where Steve (aka Cragdaddy) and Aaron are exchanging beta about a particular problem, and you can catch me topping out on the first ascent of “Stalagmite” (V0) on the Tuscan Boulder in the Lonely Area.  In addition to a few more random shots, you can also catch a glimpse of Cragbaby and I playing Pony Whisperers at the 12:30 mark. You can make the video full screen by right clicking the “play” arrow and selecting “enter full screen.”

I can say firsthand that this is a fantastic bouldering area!  Both Daniel and Aaron deserve a lot of thanks for taking an interest in the park and promoting awareness for this wonderful natural resource we have the privilege of using in the climbing community! If you want to read about some of our adventures out at GHSP last year, click here.  If you want to read about the new adventures we are planning to have there soon, stay tuned, because we are headed back up there for the first time this season in just a few weeks!