Don’t worry, this post has nothing to do with skewed hormones and ticking biological clocks.  For those readers who are non-climbers, here’s a quick little lesson in climbing linguistics… 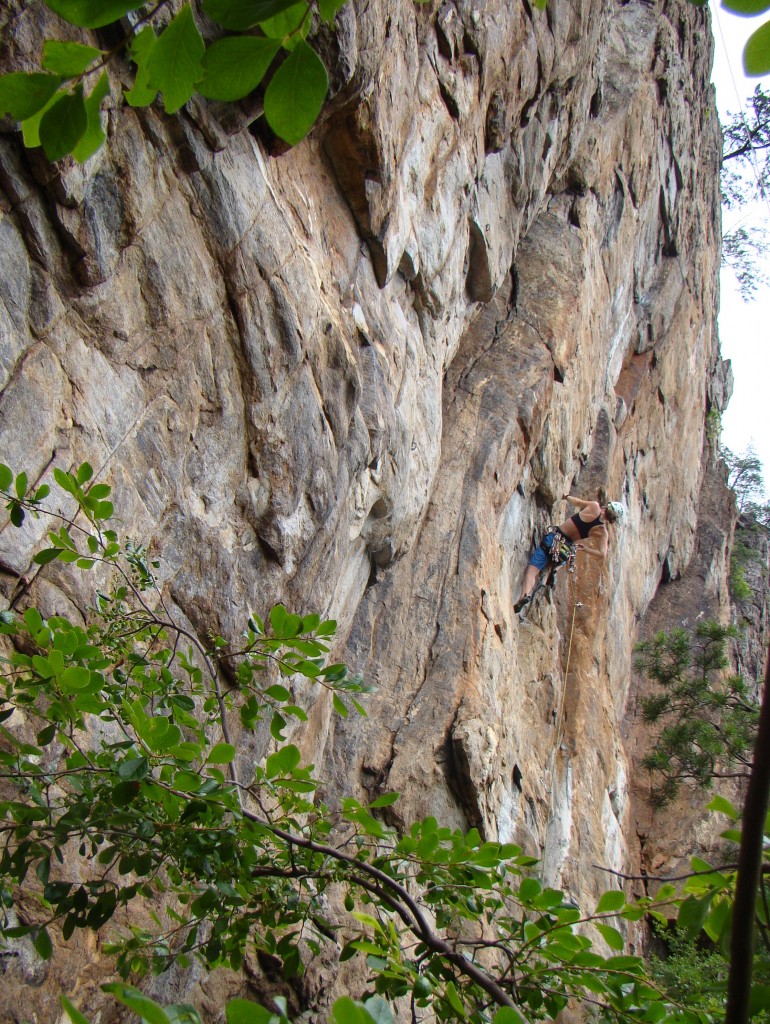 But enough about jargon, back to the hot flashes…it’s getting to be that time of year where Southeastern climbers start complaining about the heat and planning trips to higher altitudes out west.  A second (and cheaper) option is to skip the plane flight and climb at shaded crags.  North-facing crags  that only see sun for a small part of the day are your best bet.  This will buy you another month or so until the humidity sets in like a tangible wet blanket, making for a sweat-fest no matter what crag you’re at.

The main walls at Crowder’s Mountain, our local crag, faces south – which means it sees sun pretty much all day.  Fortunately this aspect will make it a fantastic option long about December, but for right now its a long way from ideal.  The Hidden Wall area faces east, which means it roasts in the morning, but by mid-afternoon goes into shade.  So Steve, Bennett, and I came up with a master plan to maximize shade and minimize sun for Saturday – Main Wall in the morning, then siesta over lunch, Hidden Wall in the afternoon. 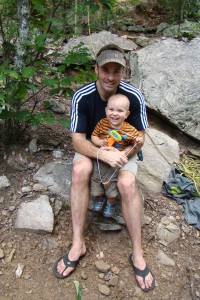 Cragbaby was nice enough to share his portable fan with Bennett

We got to the Main Wall early but probably not as early as we should have, because Electra (5.10c) was already baking by the time we got there.  It felt harder than I’d remembered it, probably b/c it felt like the chalk was melting off my hands as soon as they came out of my chalkbag.  I was proud of Steve for leading it even though he basically went bolt to bolt – I think he would have a good shot at the redpoint after warming up on something easier on a cooler day.  Thankfully the sun had gone behind a cloud when I hung the draws on Energy Czar (5.10d) – Wow what an amazing route!  An intimidating line from the ground, I was happy to be able to beat the heat and snag the onsight.  The start was a little funky, but the dihedral that came next was outstanding with a surprisingly exposed feel to it.  The crux was pulling over the bulge above the 4th bolt – its a little runout, and you can’t see the next bolt until you’re pretty much right on top of it.  Last time we were there we saw several people whipping off at the crux.  The route was originally done on gear (and called 5.11a).  I saw a fair amount of gear options while I was climbing, but it would be a very bold trad lead for sure. 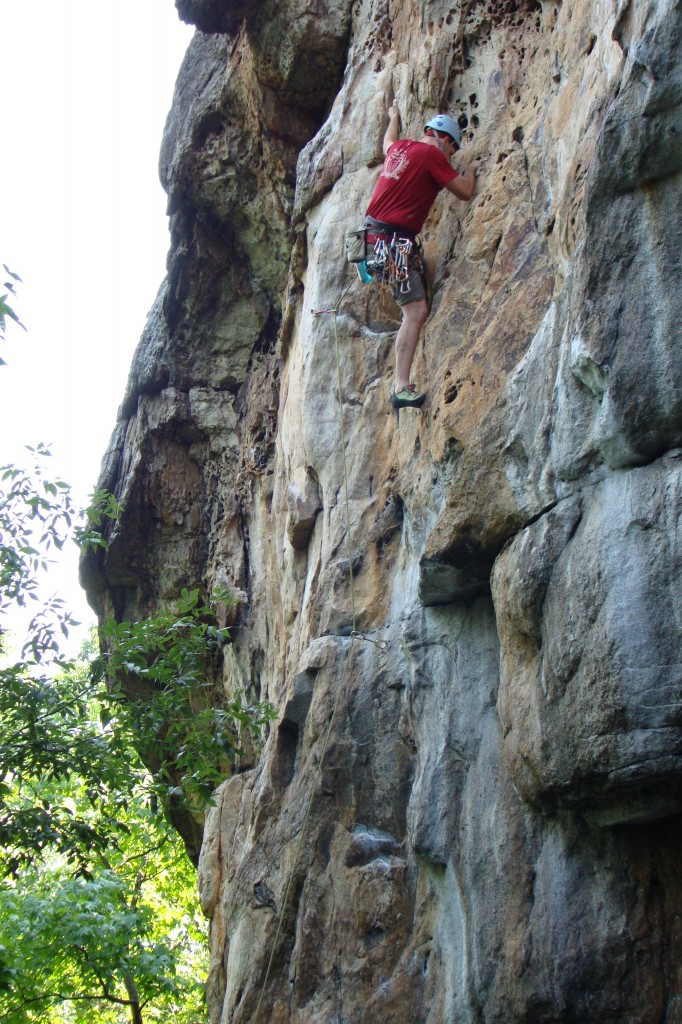 At this point it was lunchtime and C needed a nap, so we trudged our way back down the hill.  After refueling, rehydrating and chilling in the shade for a while, we drove over to the Hidden Wall parking lot.  The routes are actually only about a 5 minute walk from the road, but you’re not allowed to park along the road.  So Steve dropped everyone and gear off at the road, and then parked at the Visitor’s Center a mile away.  Next we got on Toxic Shock (5.11d), which I can now say is my hardest flash to date! (In the interest of full disclosure its a 2-move wonder, but it still felt good to nail it first try!)  This route has a pumpy, in-your-face crux with funky beta right at the start.  Once you maneuver to the ledge above the 1st bolt the route backs off to pumpy, 5.10a terrain.  Had I gone first I think I would have for sure botched the funky hand sequence getting to the ledge, so I was glad I got to watch Bennett go first.  I ended my day by cleaning The Whining (5.11d/12a).  This time I was actually able to get to the top, so there’s progress.  I think I would have been able to link more moves together if it wasn’t the end of the day, but this route is definitely more of a long-term project for me. 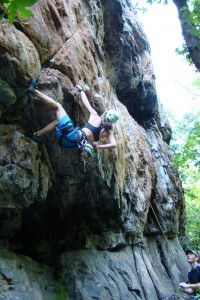 As far as our master plan, it worked in the sense that we didn’t get pelted by the sun all day – but it seems like there was an awful lot of sweaty hiking with big packs compared to the amount of climbing we got in.  One plus was that Cragbaby got in a longer nap (most of it in an air-conditioned car!) than he usually gets when we are outdoors all day, which meant that his day ended back home with a happy bathtime instead of a meltdown.  Getting out early to the Main Wall and leaving at lunch seems reasonable (at the parking lot no later than 8 would be ideal), and heading to Hidden Wall in the afternoon would definitely be worthwhile (if we could coincide it with C’s naptime) but I’m not sure we’ll be repeating the combination of both any time soon.  No complaints here though – nothing beats a great day out on the rocks! 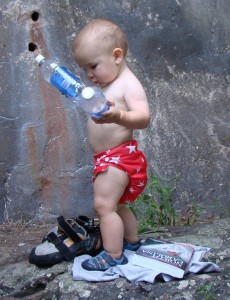 5 Responses to “A Day of Hot Flashes”