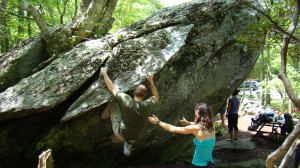 After spending the first part of the weekend hanging out with family, we met up with some friends late Sunday morning up at Grayson Highlands State Park for some bouldering fun.  It was the first time we’d been back to GHSP since last fall, and I’d almost forgotten what a spectacular setting it is!  The weather was pretty warm both days, but I’m fairly certain cooler than the majority of climbing areas in the Southeast. 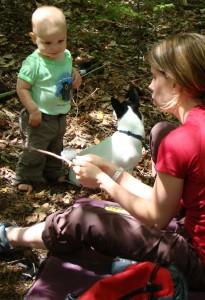 Cragbaby hanging with Melissa and Buddy

Our first day consisted of a high volume of moderates.  We started out at the Picnic/Rock House Area before ending up at the Cap-Gun Boulder in the Boneyard –

Fortune 500  (V0)
Relish the Ride  (V1)
Relish Direct  (V1)
Relish Arete  (V2)
Meatloaf  (V1+)
Indian Outlaw (V3) – There’s a move down low that feels pretty stout for the grade that kept shutting me down last fall.  I was psyched that it went down after only a few tries this time.
Arrowhead Arete (V3) – Steve, Aaron, and I cleaned off the fin around the side of the Rock House Boulder, and after a few unsuccessful flailings on a cruxy crossover move, I was able to get my beta straight and nab the first ascent! 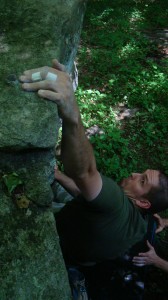 Cap-Gun (V2) – So fun I had to take another lap – two huge moves to two great holds with a solid but exciting topout!
Cap-Gun Slab (V0) – Several easy but fun lines to be had here, with one run and jump type problem reminiscent of the Fun-Filled Boulder at Rumbling Bald.
President’s Problem (V3) – A big ‘ole crank off a left heel to a balancey topout that is made ridiculously easier with the correct foot placement Another classic that deserved more than one lap! 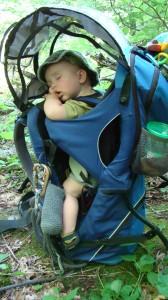 Its a rough life, being a Cragbaby...

Not a day of hard projecting by any means, but still loads of fun and merriment were had by all.  We wrapped up our day with dinner at The Log House, a greasy spoon filled with great local culture and surprisingly tasty food!  On our way back into camp we were stopped by a ranger because there were 5 cows that were on the loose, running up and down the road.  The comedy that ensued was worth the few minutes delay as we watched two rangers who were obviously not that comfortable with livestock trying to herd the obviously flustered bovines back into the confines of the fence. 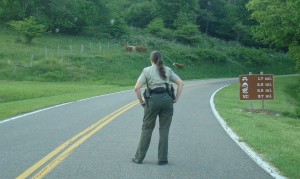 After warming up on some of the tall slabs by our campground, our crew spent the next day exploring the Boneyard.  The one bad thing about climbing in a less-developed area is that there are no established trails…we battled our way up a steep hillside through stinging nettle and poison ivy all day, stopping at various boulders along the way.  Our destination was the Luminary Boulder, an impressive larger-than-life type boulder almost as tall as it is wide, serenely tucked away high on the hillside, a long and hard bushwhack from the road. 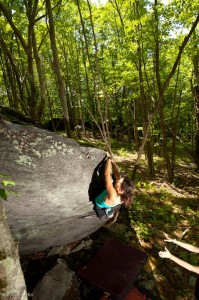 Robot Love (V0) – Really nice moves on crimpy flakes.  The stream running underneath the boulder adds to the excitement. After stopping for Aaron to point out some lines on some other boulders, we ran into some other climbers, one of whom was professional photographer Dan Brayack, who is doing all the photography and layout for the upcoming guidebook.  He set up shop over at the Belgrano Blade to shoot some of everyone climbing on this amazing inclined roof.
Cannonnade (V2) – An aesthetic line with a topout that looks a lot more intimidating than it actually was.
Billy Budd (V4) – After numerous tries, came heartbreakingly close to sending, but all I came away with was a nasty bleeding flapper on my ring finger.  Next time. 🙂 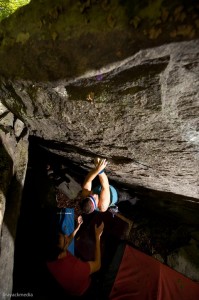 Captain Hook (V1)
Cows on the Run (V1) – I couldn’t believe that the most obvious line on the boulder hadn’t been touched yet – a diagonal hand crack trending up and right along the entire span of the boulder, probably about 50 feet.  I decided to give it a go.  The crux is getting established in the crack, then the higher you get, the easier the terrain is.   I chose the name based on the shenanigans with the cows the night before, and because taking several laps on it would be a great way to warm up both body and mind for some of the other problems on the wall.
Welcome Home (V1) – TALL but all the harder moves are down low.
Dances with Wolves (V2/3) – Harder and taller than its neighbor to the left, but again, the business is at the start. 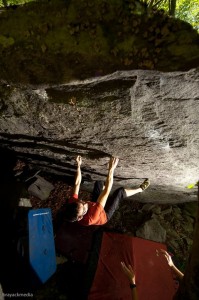 One of the best parts about this area is its yet to be achieved potential, with scores of rock just waiting to be explored, often only a few minutes away from the road or trail! Its been really exciting to be a part of all of the development of this area, even though the role I’ve played has only been a minor one.  I’m really looking forward to next year when the guidebook will be published – I was able to get a glimpse at some of the preliminary pages, and it looks stellar!  Until then, Aaron has put in a lot of time and effort as an Administrator over at Mountain Project, so if your interested in checking out the area and want some beta, clicking here is a great place to start! 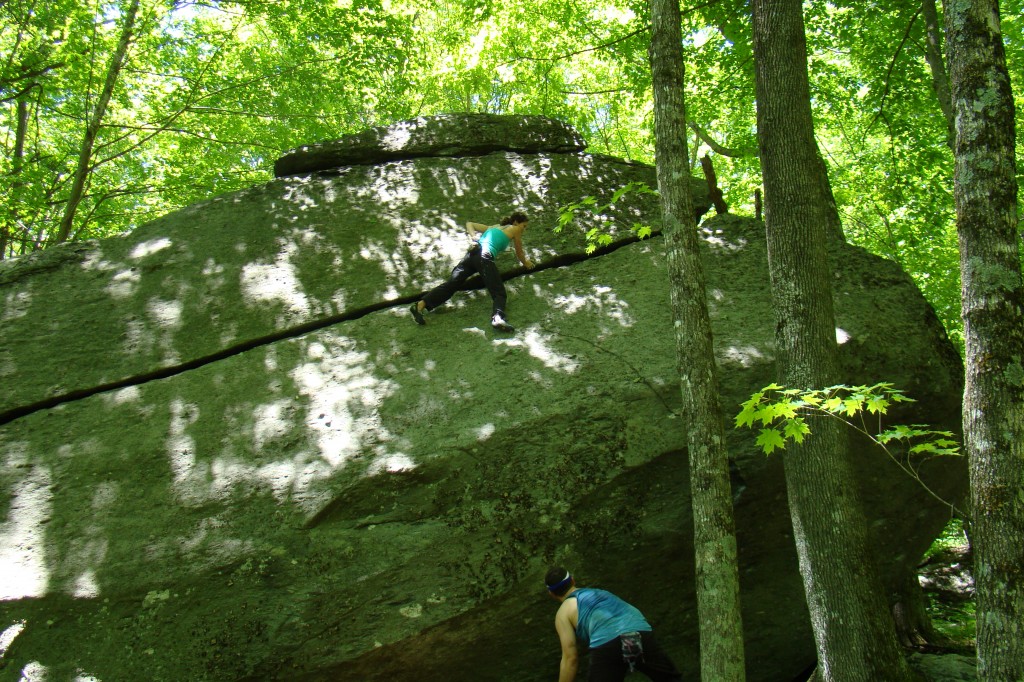 First ascent of Cows on the Run

Lucky for us Dan was around to take some pictures, because the rest of us didn’t do so hot at taking the camera out, but if you wanna see what we got, click here.