At some point I think most climbers develop what I like to think of as “Daydream Projects” – routes that for whatever reason, almost seem to call your name.  Maybe its because the route is particularly aesthetic or has a famed notoriety associated with it.  Perhaps the route speaks to you because you know it will  push either your mental or physical abilities (or both!).  Or maybe you keep obsessing over it because you’ve gotten on it so many times and keep falling off at the same dang spot.  You have a connection to the route on a personal level.  You rehearse the crux sequences in your sleep, analyze the beta with your climbing partners, and can’t figure out why non-climbers don’t get sweaty palms just looking at pictures of the route. But regardless of the reasons why certain routes speak to certain people, its a celebrated day when these types of projects are finally packaged up and sent! 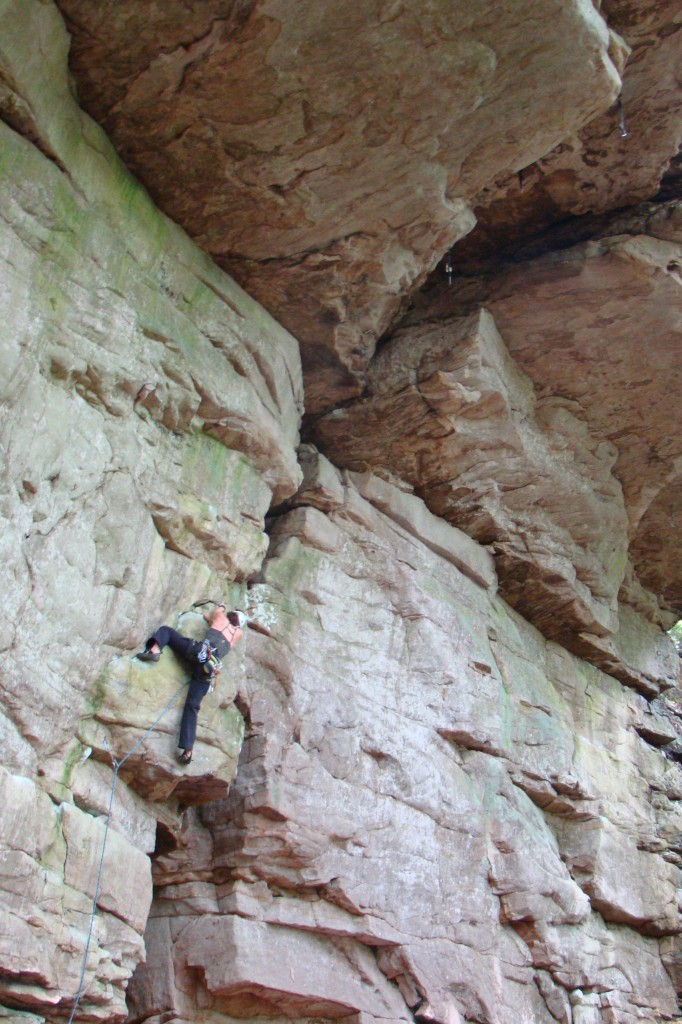 The crux crossover move on the face

For me, one of these such routes was Heresy (5.11c) at Lilly Bluff at the Obed in eastern Tennessee.  No doubt its an area classic, and ridiculously intimidating from the ground – a 50 foot technical face climbing extravaganza followed by a 25 foot completely horizontal roof.  Its also a great example of the style of climbing that the Obed is known for.  But I think the main reason why Heresy made such a personal impression on me was the timing of when I was first introduced to it.

My husband and I took our first trip to the Obed during the spring of 2008, and had only been climbing for a little over a year.  I was just starting to break into leading sport routes in the low 5.10 range.  On that first trip with us were our friends Scott, Chip, Stephanie, and Rhonda, all of whom were much more experienced and well-traveled than us.  That first trip we only spent one day at Lilly Bluffs – while everyone else took turns hopping on a small selection of easier routes, Scott and Chip had their sights set on Heresy.  I remember watching them work the route, amazed that it was possible for relatively normal (strong climbers yes, Sharma-like powers, no) to climb something that literally was horizontal – and then hearing them joke about how looks can be decieving, that the hardest moves were actually on the face.  After they were done putting on a clinic, I timidly volunteered to clean the gear on toprope.  I only needed to get through the face climbing, since all the gear in the roof is fixed.  However, I proceeded to surprise myself by finishing the route!  Sure I had a good bit of “top-rope help” through the crux, and yes, I stayed in the chimney for at least 15 minutes before finally being coaxed out onto the daunting roof.  I also hung at every single bolt in the roof because I didn’t want to swing out if I fell – but I made it to the end.  I remember being very thankful that I had the opportunity to get on a route like Heresy, because I just knew there was no way I’d ever be able to hang a rope on something of that caliber by my own strength. 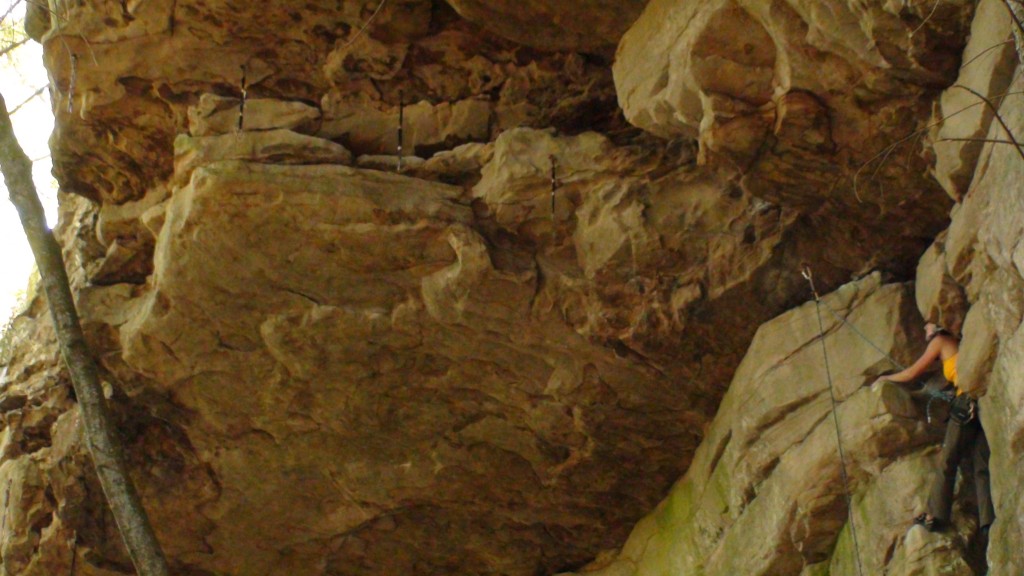 Fast forward 3 and a half years later – Steve and I returned to the Obed, this time as much stronger and more experienced climbers (trip report found here).  Somewhere in the back of my mind was cautiously optimistic about getting back on Heresy, this time on the sharp end.  To be honest, I didn’t care a thing about the redpoint – I just wanted to get up it on lead.  I figured I was strong enough to at least flail my way past the crux, and knew that there was no pressure of leaving gear behind once I got to the roof, thanks to the perma-draws, nor any need for a fear of falling, thanks to the steepness factor (no chance of hitting anything, just big airy swings!).  On our first day there we saw another group on it.  They must have seen me drooling at it, because the last person in their group offered to trail our rope up.  I took them up on their offer, and was pleased that although I fell once at the crux, I did the roof clean.  A few days later, as a grand finale to the last day of our trip, I finally tied into the sharp end and led Heresy.  I fell once at the crux, and fell again trying to clip the chain anchor, but was overjoyed to have completed the climb. 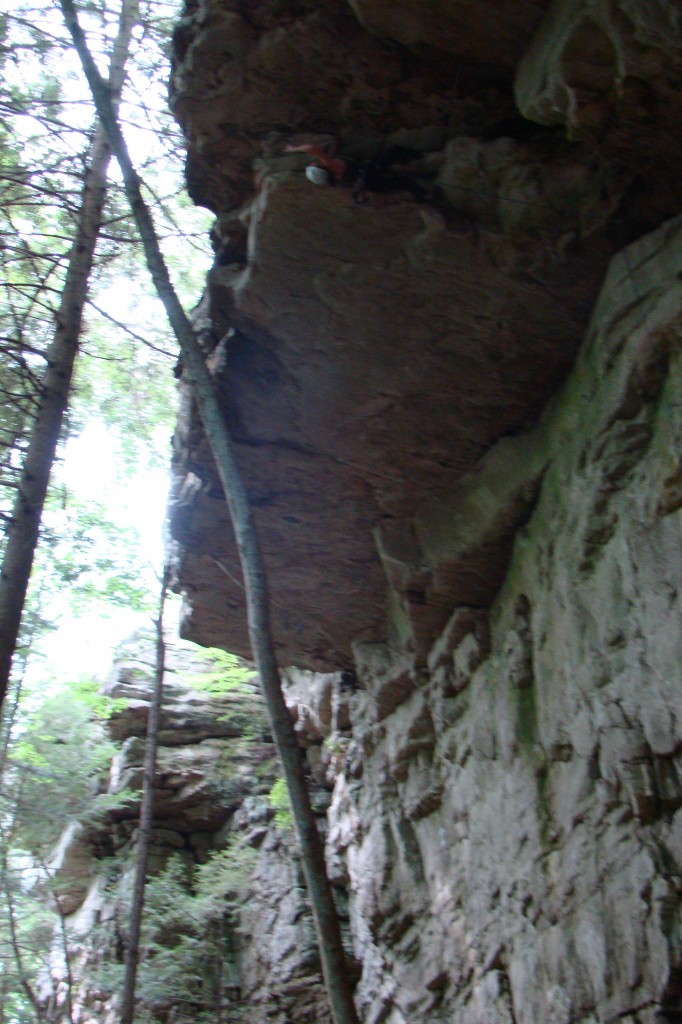 Even though my performance on it was far from stellar,  Ever since then I’ve been dying to get back there so I can work on it some more.  Take another fast forward to last weekend – we finally made it back out there for a short day and a half trip (click here for the trip report). It started pouring down rain on us around 1000 on the first day – no worries, I thought.  Heresy will for sure stay dry, which the majority of it did…except for the tail end of the crux, and the opening moves of the roof, which after an hour of rain had turned into a small waterfall from seepage.  I was a little bummed, but there’s a million other fantastic climbs there keep us busy, so I just figured it wasn’t my time to send.  The next day when we went back to Lilly, I was almost giddy to discover that the wet areas appeared to have dried overnight.

Even though the rock was a little sweaty from all the humidity and I knew conditions were by no means perfect, I decided to give it a go anyway.  I wasn’t too confident about finagling my way through the crux since I had trouble remembering my beta, so I wasn’t really looking for a redpoint on my first attempt.  But as soon as I tied in I felt calm, focused, and solid, and before I knew it, I was through the crux and up in the chimney!  At this point I realized that I actually had a chance to send this sucker, so I made sure to get a good rest in the chimney before taking on the roof.  Each clip in the roof went smoothly until it came time to clip the single chain anchor…no matter what position I got my body in I just couldn’t reach it, and my pump-o-meter was sky high at this point! 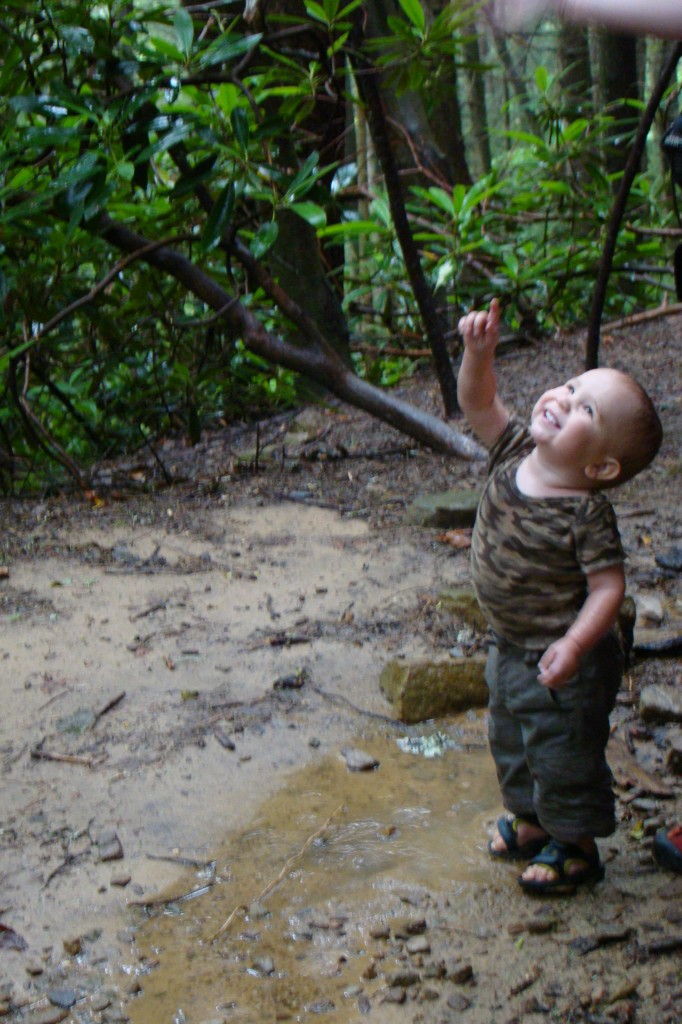 I lost focus for a split second as I realized this was the same place I fell at last time, and how heartbreaking it would be to botch it right at the end like this.  I knew I needed to find a better stance, so I took a couple of controlled, deep breaths, cut my feet, and swung my left leg into a heel hook on the other side of the roof.  This allowed me to take just enough weight off my screaming arms to allow me to take a hand off to clip in.  As soon as I felt the rope slide through the carabiner, my spirits soared (and said something dorky like “wahoo”) as I was lowered back to the ground.

Of course it feels fantastic anytime you send a project.  But after only 4 total runs my experience on Heresy hardly qualifies as impressive when stacked up to all the work Chris Sharma had to put into Jumbo Love (5.15b) or how long Tommy Caldwell had to train for all of his free ascents on El Cap.  I guess I’m realizing that my bigger project these days is being the best role model I can be for Cragbaby – and an important part of that is teaching him to set goals and work towards achieving them, both on the rock and off!

4 Responses to “The Heresy Saga”