Well its about time.  We went to the New this past weekend and we had….wait for it….NO RAIN!!!  The Lineberry Rain Curse is officially broken!  Sure we’ve had a few sunny day trips here and there, but its literally been a year since we’ve roped up on a completely rain-free weekend.  Conditions could not have been any better – low humidity, cloud cover, temps just barely hitting 80!  And though I would never in a million years wish rainy conditions upon any of my climbing peeps, after hearing of two other crags that got dumped on (one with only a 10% chance of rain!), I will say that it was nice to finally have been the folks that ended up in the right place at the right time. 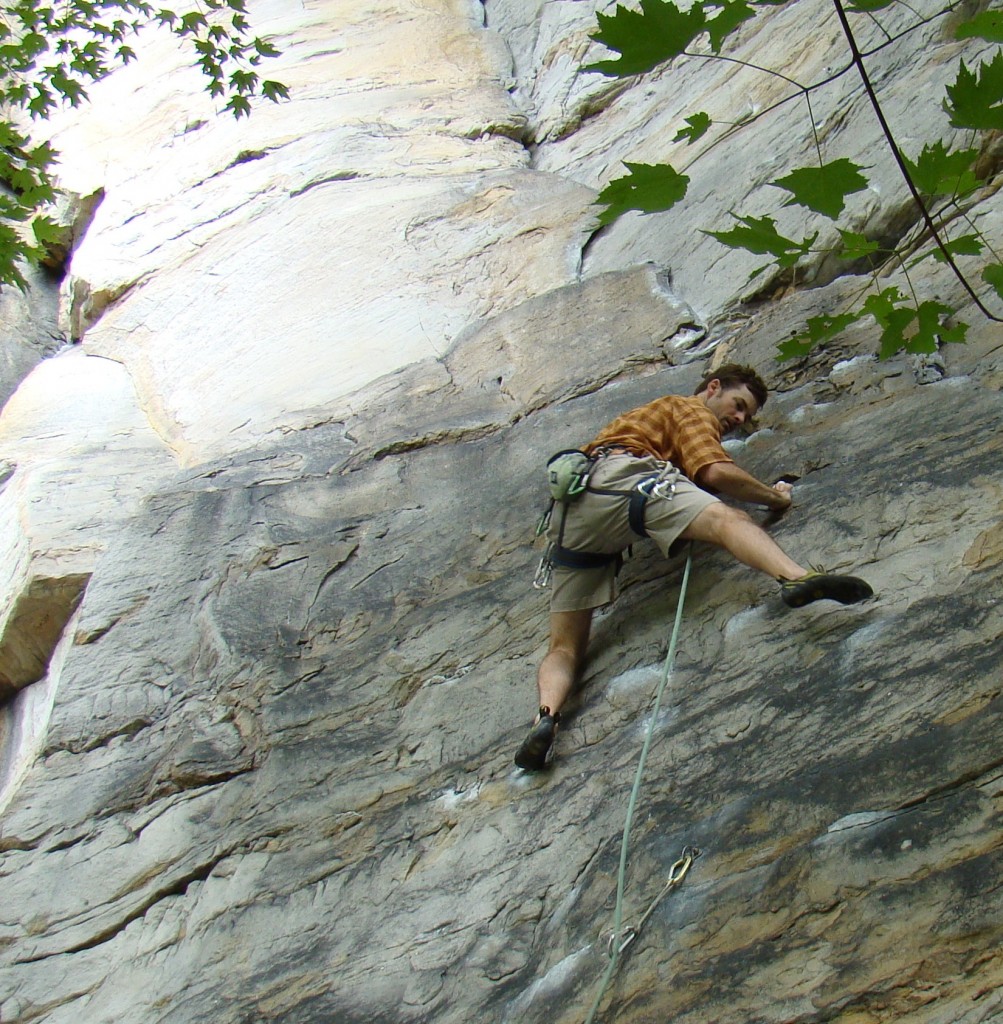 Bennett stepping carefully on Grit It and Bear It (5.11a)

DAY 1 Routes – Endless Wall
Biohazard (5.8) – Aside from one stray route a little over a year ago, this was the first time I’d led any trad since before I got pregnant.  It felt great to finally drag the rack up a route again (even if I did end up taking easily 3 times the amount of gear that I needed).  And since getting back into trad was on my Hit List for this year, it was great to start working on that goal!  The route was great, the gear was good, and aside from a few awkward moves up top, the climbing was straightforward and fun.
Exoduster (5.10b) – This was my second time on this climb.  The first time was my first climb back from the Maple Canyon Knee Incident, so my lead head probably wasn’t the greatest (I also happened to be 3 weeks pregnant and didn’t know it…).  Needless to say, my initial thoughts about this route probably were a little negatively biased.  This go round went much better, although I still say the grimy, overly chalked rail makes it feel stout for the grade (I actually avoided the rail altogether and opted for the crimps directly along the bolt line, which felt technically harder, but more secure…)
Stim-o-Stam (5.11c) – A technical face climbing extravaganza!  A bouldery start under a roof led to a thin and delicate dance up small incut edges and pockets, ending up with spectacular exposure out on the arete.  This was my favorite route of the weekend, and I was thrilled to luck up and get the crux sequence right first try, making for a really fun onsight! 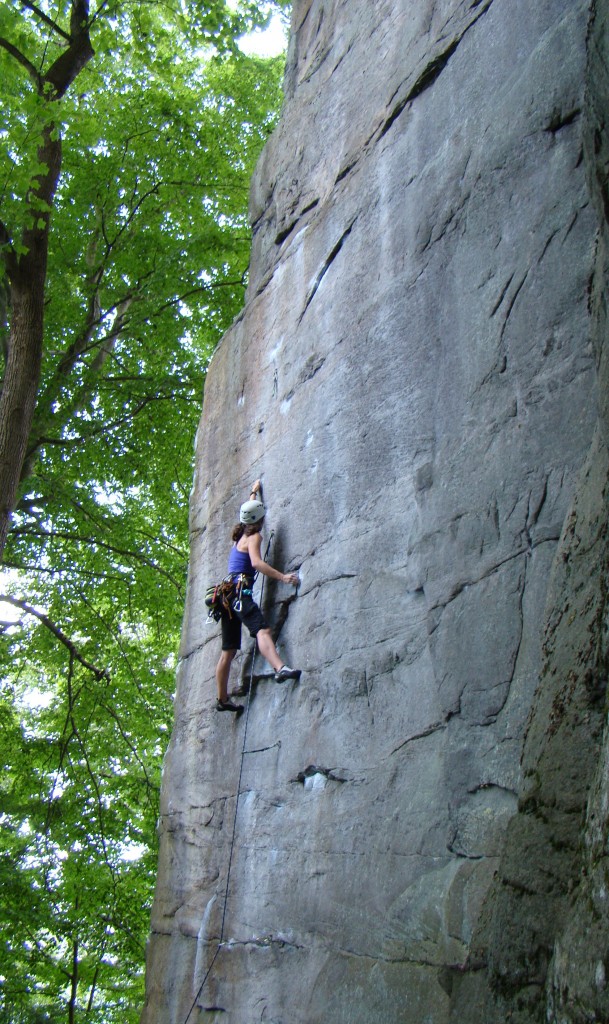 Hoping the wind doesn't blow me off the delicate edges of Pockets of Resistance (5.12a)

S’more Energy (5.11c) – I was the only one out of our posse that thought this was harder than Stim-o-stam, but it was definitely harder for me.  I flashed it, but only because there were decent shake-out stances before every tricksy section, enabling me to take twice as long on the route than I probably should have.  If you are sub 5’10”, beware, you will find a lot of the moves really reachy, including a few clipping stances…
Freaky Stylee (5.12a) – Bennett and I were the only ones that did this one.  He hung the draws and I opted to clean it rather than lead it.  The crux is moving above the last bolt and then there is quite a run out to the anchors, so apparently that bolt is the one of the most whipped upon bolt in the entire gorge…I wasn’t super confident on my ability to pull 12a moves at the end of the route at the end of the day, so all things considered I think I made the right choice.  I was really surprised at how solid I felt on it though – I made it all the way to the crux before falling, and probably tried less than 10 times before getting the crux sequence.  Right after the crux you get a really good hold where you can shake out and collect yourself, and to the anchors felt 10b-ish.  Knowing what its like up there now, I think I could maybe be talked into leading it another time. 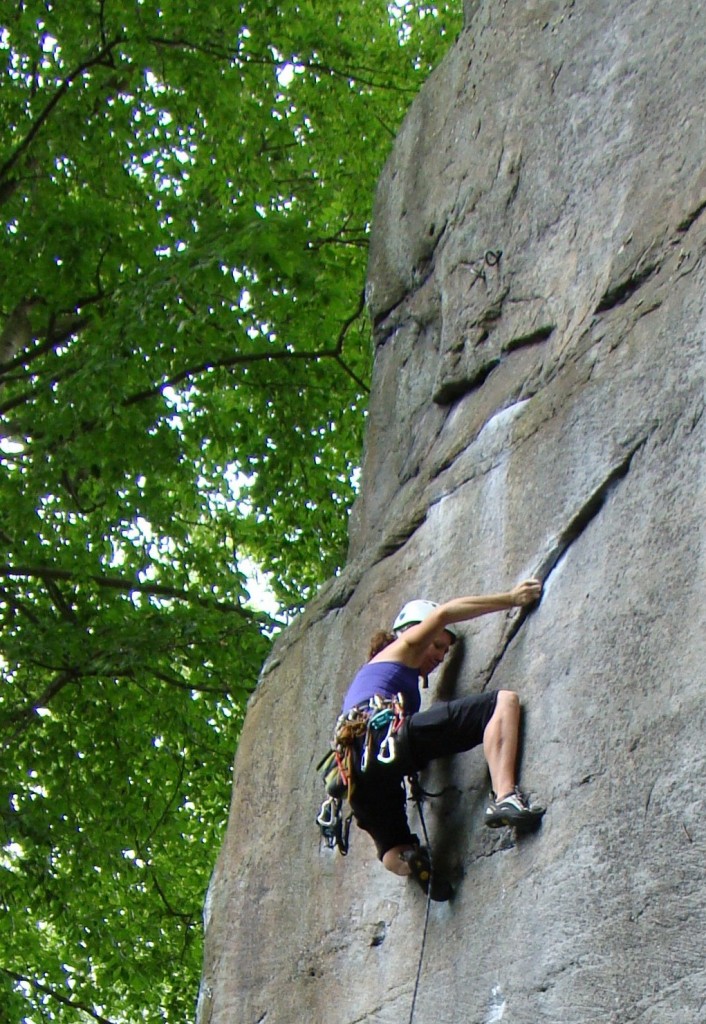 My crux beta for Pockets

Day 2 Routes – Kaymoor
Not on the First Date (5.11c) – Not really what I wanted to warm-up on, but Rico was taken, and I’d toproped it before, so I knew what to expect.  Bottom section has a bouldery feel – long moves to small horizontal slots, and the crux is moving over a bulge on some nasty crimps and credit card rails.  The slabby finish keeps it exciting until the very end.  I didn’t remember anything about the crux, so I flailed my way through it finally after repeated falls. Not one of my finer moments…
Grit it and Bear it (5.11a) – After reports that this route was runout and felt a full number grade harder than 11a, I decided in the interest of time to just clean it on top rope.  I wanted to finally get to #5 on my Hit List, so I wanted to save my mental energy for that.
Pockets of Resistance (5.12a) – Woo-hoo!  Goal #5 – Lead a 12a, check!  Though I’ve toproped a decent number of 12’s, I’ve never led one before (unless you wanna count Homer Erectus, which I don’t, since its a one-move wonder that most people traverse around anyway).  This was one of the routes that was recommended to me as a 12a that would fit my style of climbing, and would be a good first one to tackle on the sharp end.  I was fully expecting to feel pretty desperate on it, possibly not even being able to finish it.  But although I struggled at two distinct sections, I did all the moves and made it to the top uneventfully and without taking half a day to do so!  I think another couple of tries to solidify my beta and efficiency and I’d be able to get the redpoint!

Though my original goal was to just lead a 12a bolt to bolt, I’m wondering if that was setting the bar too low…I’m tempted to not to cross it off the list until I can tick the redpoint, especially since I feel like I’m only a few tries away (I figure 1 try to remember the beta, 1 try to make it efficient, 1 more to almost make it but botch it when my foot pops at the crux, and then a send on the 4th go seems conservatively reasonable?).  I guess it depends on when we can get back there, and if we can find a third that wants to hit up Kaymoor (takers?)  I was also starting to get worried that Goal #7 (Get back into Trad) wasn’t gonna happen, so it was nice to make a step in the right direction.  And of course I was psyched about the weather – after temperatures in the low 100’s earlier in the week, this weekend felt absolutely heavenly.  And from what I hear, I’ll probably have to savor that feeling as long as I can because there’s another heat wave coming through this week…The only negative to speak of was that we were having way too much fun to pick up the camera the majority of the weekend.  The next couple of weekends we’ll be taking off from climbing (and blogging…stay tuned for lots of guest posts from some cool peeps next week!).  We will be headed to Michigan for my brother-in-law’s wedding/family vacation.  But we are already starting to line up the adventures for August, so if anyone has an in with the weatherman tell him if he could copy and paste thist past weekend into every weekend in August, that would be just great, thanks  🙂

9 Responses to “The New Never Gets Old”