Our original weekend plans included a climbing trip to Boone, but unfortunately Mother Nature had other plans.  With all of our family travels and such it had been almost a month since we’d gotten outdoors climbing, so we were definitely itching to get out.  But because the forecast was so sketch, we ended up just staying in town and climbing locally at Hidden Wall.  Considering the weather reports from friends in other parts of the state, it seems like it was the better choice, although conditions were still mediocre at best. Here’s the good, the bad, and the ugly…

THE GOOD:
– NO RAIN – The storms evidently pass fairly close to us, since the skies darkened and looked a bit ominous at times, but Crowder’s may in fact have been the only dry rock in the state today, so we definitely chose the right destination.
– GUIDEBOOK WORK – I got to scout out some of the more obscure areas past all of the routes that are in the current guidebook.
– NEW FRIENDS – Shared the wall with some fun local folk we hadn’t met before

THE BAD:
– 90% HUMIDITY – Even though it didn’t rain, we still ended up wet and gross.  Add in the summer heat, and you’ve got a recipe for an oppressive tropical sauna.

THE UGLY:
– FLAIL FEST – I did not climb well at all.  Although I did get a little farther on my project, I’m still getting shut down at a really reachy section.  I also struggled on a route that I had previously flashed. In fact our whole crew seemed weak and less than motivated after a while.  I’m sure the weather had nothing to do with it…

I guess since the GOOD outweighed everything else we can still call the trip a success, but I’m putting in my request to the weatherman right now for cooler temps and dry weather this coming weekend at the New for my annual birthday pilgrimmage.  There wasn’t really anything worth writing about or taking pictures of in terms of a trip report, but what is worth mentioning is a call for pictures. 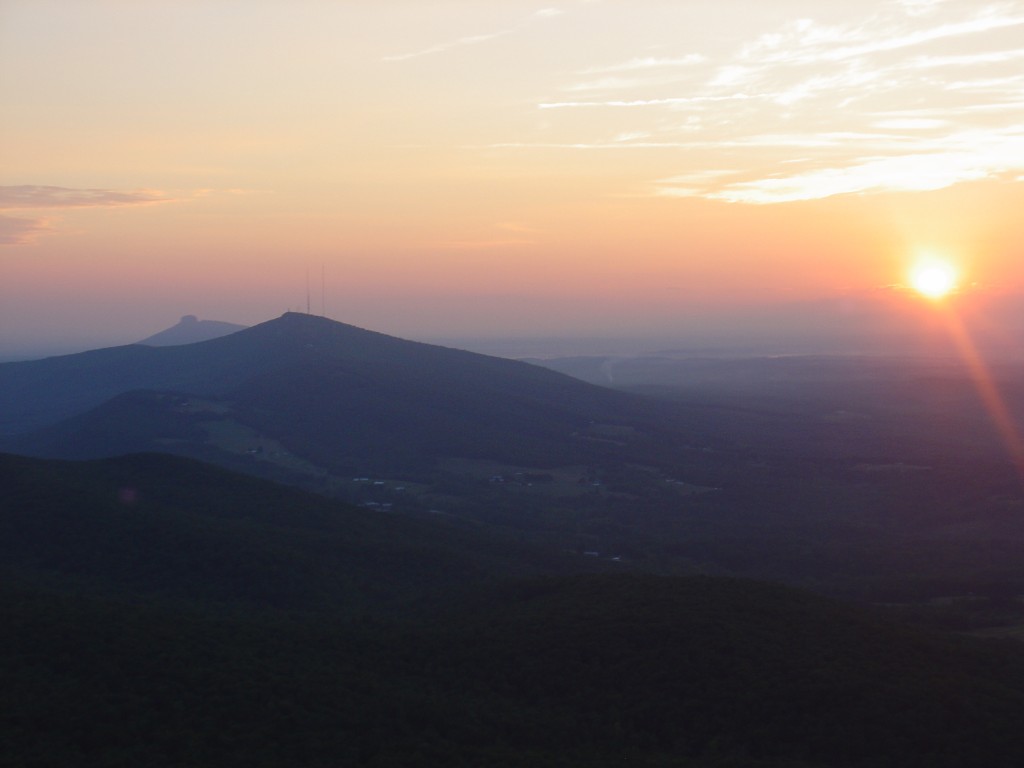 Ah, the Piedmont - spectacular climbing when the weather isn't so "tropical-esque" (This shot was taken on a cool fall evening from atop Moore's Wall, with Pilot Mt. in the background)

Though writing on the guidebook is well underway, I haven’t done anything yet with pictures.  While I’m planning on tackling most of the cliff layout and route pictures this winter when all the leaves are down, its always a good time for action shots.  And as cool as my climbing posse is, I figured that most readers will want to see pictures of more than just my crew at the crag.  So, if you are an NC climber with high quality images (from Moore’s Wall, Pilot, Stone, or Crowder’s Mountains) that you would like to be considered for use in the upcoming guidebook, please contact me or post them to the Carolina Rocks: The Piedmont facebook group.

I’m planning to use the facebook group not only as a way to get some great local pictures, but also as a venue for providing updates on the progress of the guidebook.  I’m hoping to get feedback from NC climbers on what they most want to see in a guidebook, as well as try to gain some consensus on difficulty and/or star ratings.  So if you are interested in up to date information on the progress of the guide, please join!

5 Responses to “The Good, The Bad, The Ugly…and a new Facebook Group.”