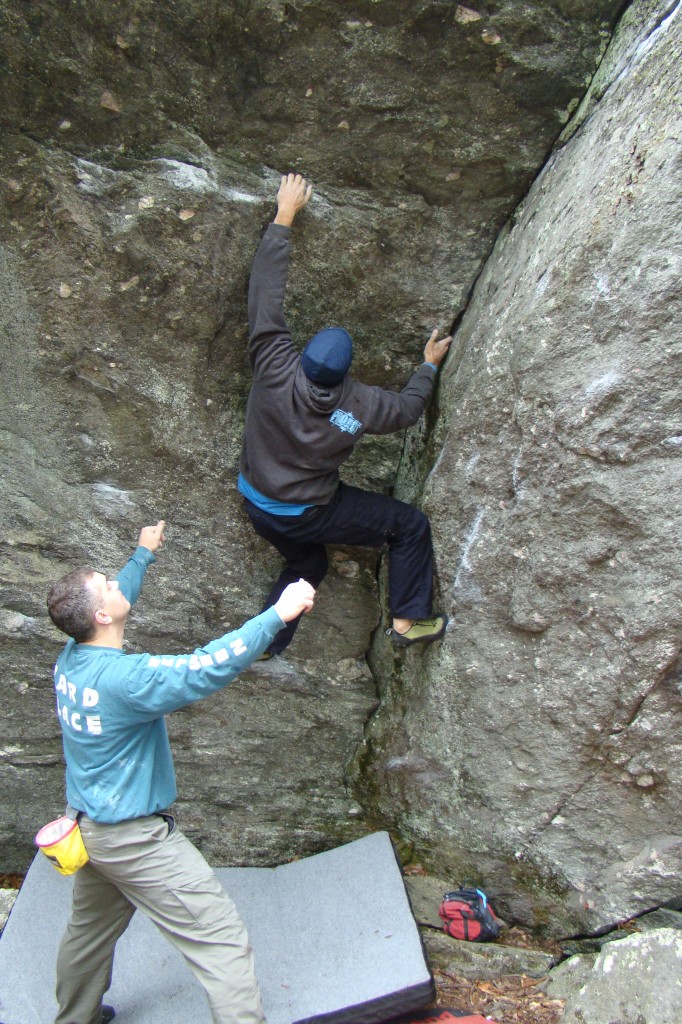 Steve gets the day started on Cherokee Dihedral (V1+)

From wallowing in the sunny, upper 90’s of the Obed a mere 3 weeks ago to bundling up with foggy mornings in the 40’s at Grayson Highlands this past weekend, one would think we skipped over autumn altogether and moved straight into early winter.  Though the forecast across the Southeast was looking pretty grim, it appeared as though a lone bright spot was hanging over Grayson Highlands State Park with a mere 20% chance of morning drizzles.  However,we soon learned that a lack of actual rain doesn’t necessarily equal dry conditions.  It seemed as though the higher we drove in altitude, the lower the clouds got.

We spent a good bit of time throughout the weekend trying to decide whether it was raining, misting, foggy, or a strange combination of all three.  Regardless of what we ended up calling it, the wet weather did limit our options considerably, although we weren’t about to let nature dictate whether or not we had a good time.

We headed to the Picnic Area first, seeing that the 30 second approach made it worth checking out the Rock House Boulder.  We were pleasantly surprised to find everything dry except for a little bit of grime on the topouts, which were quickly remedied with a towel, chalk, and Matt B.’s unmatched drying skills.

Cherokee Dihedral (V1+)
Papoose’s Rain Dance (V3/4) – We worked a new line that followed the right trending ramp over on the left side of the boulder.  It took me a few tries to figure out the start, but once I did, I sent the the rest of the problem without issue.  It started on some pretty small crimps and a high foot, then bumped and crossed its way along the ramp until reaching a heart-shaped flake that looks like its about to fall off (but passed all of our rigorous testing).  From there, the problem continues up and right and tops out just left of Indian Outlaw.  I did it twice, topping out slightly different each time, but neither seemed to affect the grade.  I’m bad at grading problems…its somewhere in the neighborhood of V3/4, but I would love feedback from anyone headed up there in the near future.  The starting crimps aren’t painfully sharp, but they are really small (which is the only reason I might give it a 4), and the only high foot makes for a powerful, compact start (the crux by far).  The next couple of moves are balancy and technical, and once you hit the flake, the rest is pretty straightforward and easy.  I’ve been wanting to name a problem after Cragbaby, and all the other problems on the Rock House Boulder have Native American names – hence the Papoose.  The Rain Dance is in keeping with the wet weather as well as C’s funky moves to Matt’s techno music all weekend. 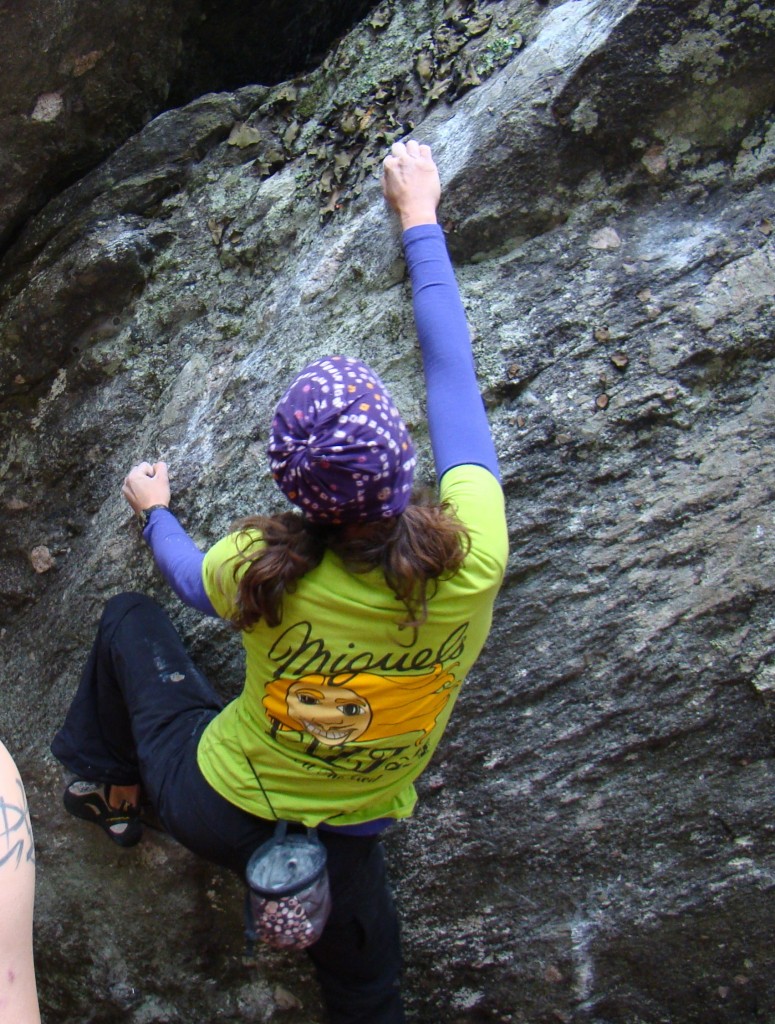 Down low on Papoose's Rain Dance

Our next stop was to the Crooked Road Boulder, which Steve and I had never been to, and Matt had been only once.  This is probably one of the coolest-looking boulders I’ve seen in Grayson thus far – a massive, overhanging, intimidatingly tall rock, divided by two prominent cracks towards the middle.  Its obvious this area hasn’t seen a ton of traffic, based on the amount of loose blocks we cleared off.

Life is a House (V2) – Crack climb with a sweet crossover move down low.  The original starting jug broke off, revealing an even bigger jug deep within the crack.
Narcolepsy Crack (V3) – Another great crack problem
Rosewood Casket (V4) – Darn foot popped as soon as I left the ground, blowing my onsight.  Sent next go.
James River Blues (V2) – My highlight was watching Steve and Matt trundle off bigger than cragbaby-sized blocks from this problem… 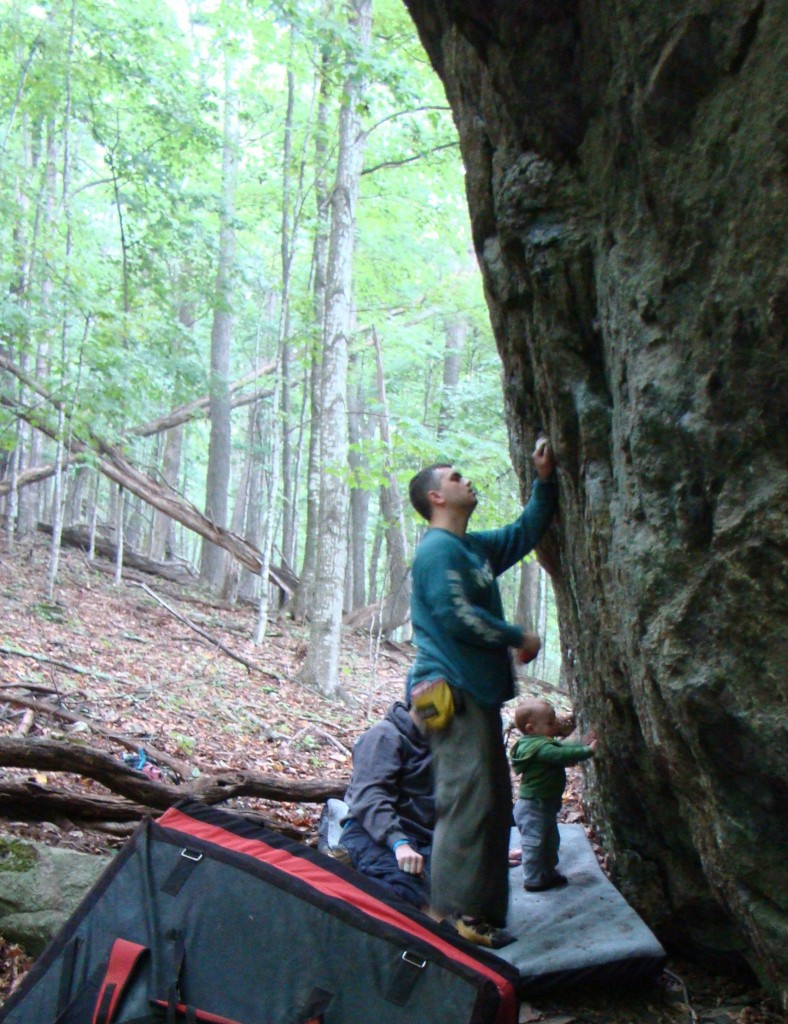 The one restaurant somewhat near the park was actually closed for the weekend since the owner was on vacation, but we were told that there were “plenty of options” in White Top, a small community 10 minutes in the other direction.  We drove 20 minutes, but all we found was a gas station with a deli/pizza sign out front.  There were a few booths in the gas station, and although it was rather odd eating dinner right beside an aisle containing lighter fluid and swiss cake rolls, the food was actually pretty good, although I will admit that I’m not picky after a day out on the rocks.

The next day wasn’t much of an improvement weather-wise, although it was slightly warmer.  The most notable difference however was the size of our posse – this time 4 more folks joined us on our search for dry rock.  We started out at The Hive Boulder on the Listening Rock Trail, one of my favorite areas at Grayson. 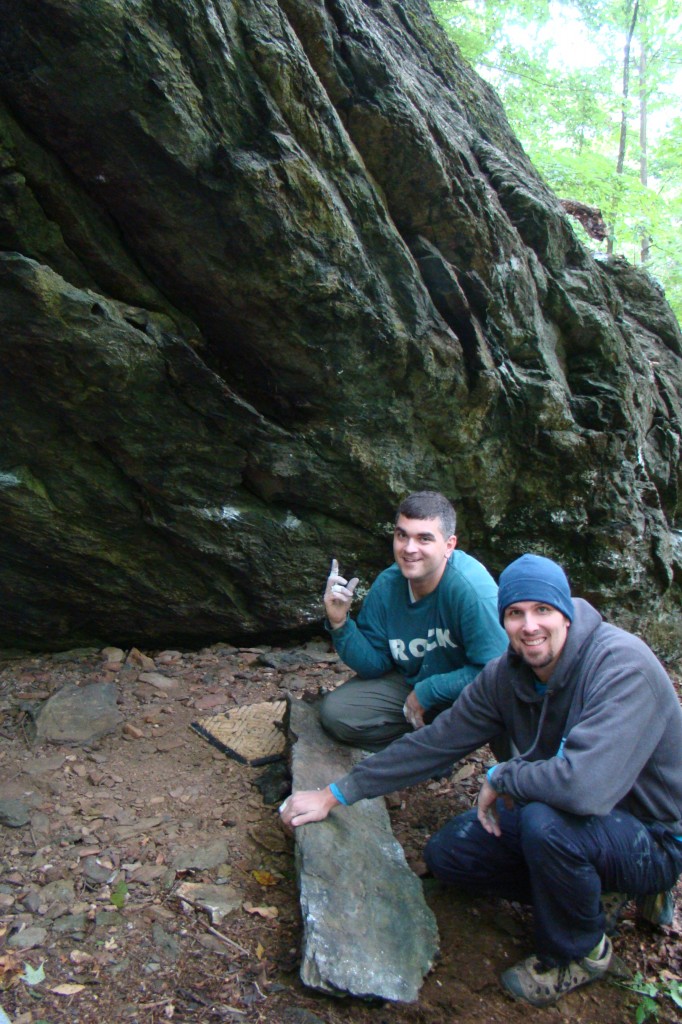 Steve and Matt with their trundled flake - the black area just up and left from Matt's head is where the flake once was.

Left of Jaws (V1) – Not sure what this line is called, but it makes for a good warm-up
Eye of the Narwhal (V4) – Initially I thought I’d done this problem before, but when the start felt completely foreign to me, realized that previously I had done the line to the right that has the same topout (The Hive V3+).   Narwhal is definitely more than a touch harder than its neighbors, only made possible for me by a key crimpy pocket for my right hand.  A great face problem with long reaches and tiny holds.
Locksmith (V3) – Really fun side-pulling made easier with good footwork.  I worked out to the lip and got my heel up, but was dismayed when I realized that all the topout crimps were sopping wet.  Finishing the problem would have been pretty sketchy so I bailed.  Looking forward to getting on it again in better conditions, because its definitely a problem worth sending. 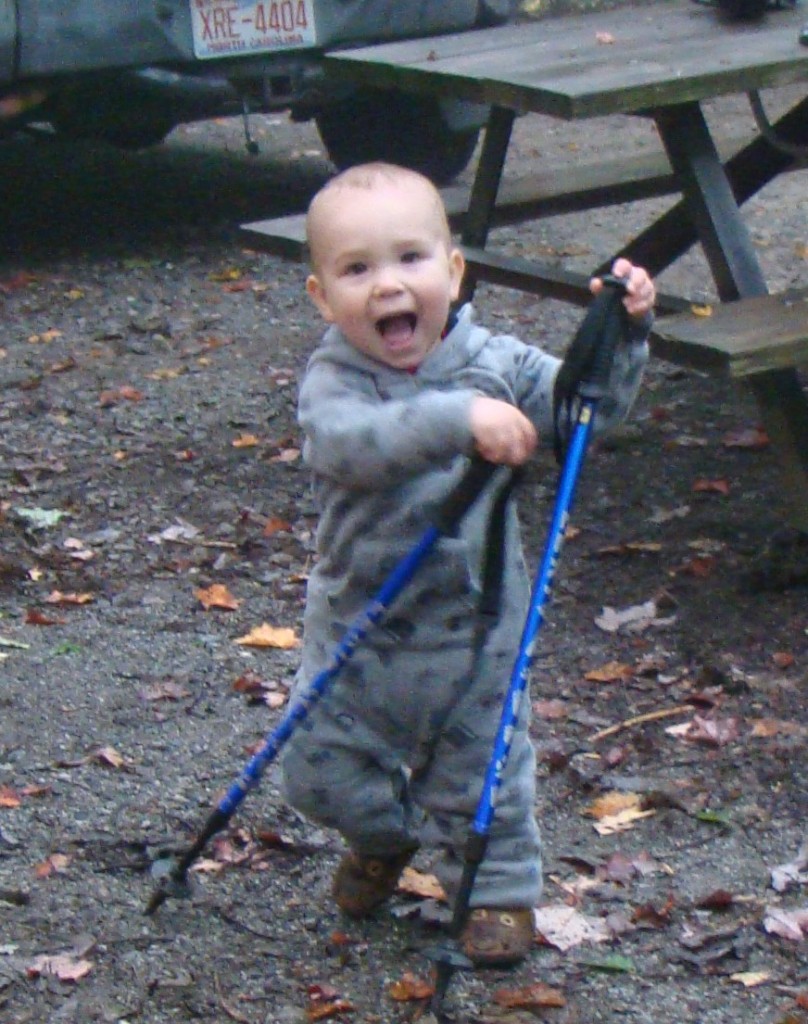 At this point we packed up and headed over to the Fantastic Four Area, – and more specifically, The Thing Boulder.  Considering the issues I have with grading problems, I was thrilled to see that the majority of the rock was dry so that we could get some more hands on the problems Steve and I established last fall.
Metamorphosis (V3) – Sit start on a low set of crimps.  Pop out to a pinch rail, then fall up and into an insanely sharp jug, then finish using a set of cracks on top of the boulder.
Bear Paws (V4) – Originally I’d called this V2, but flailed and flailed this time before realizing that my original starting foothold had broken off since the last time we were there.  The new start uses a much lower left foot, with hands matched on the lowest crimpy portion of a vague diagonal fin, and a high right foot.  Work up the fin, make a core-intensive cross over to a large flat jug, then top out on juggy flakes. 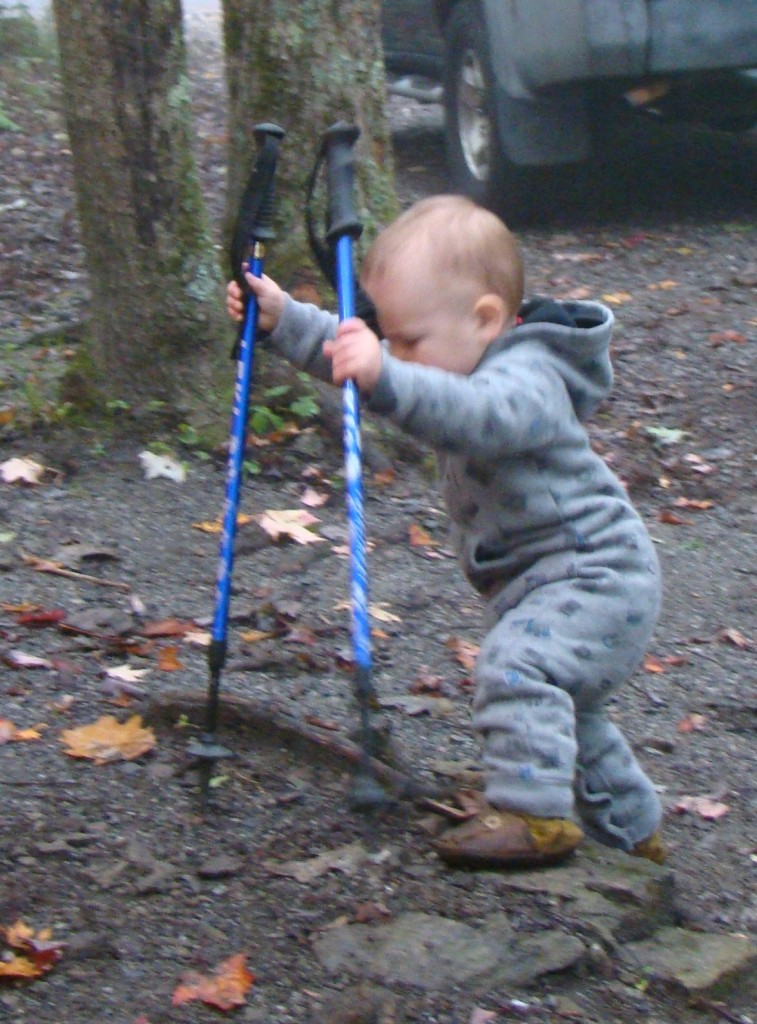 The verdict?  After I did them again, Cat did them both, and April did Meta, I feel like the grades are pretty accurate.  But be forewarned that both problems seem to exude a girl-power vibe, since the moves cater to small-handed, flexible people (that, and the fact that none of the boys could send them 🙂 )

All in all, its hard to say that the weekend was a washout when I never had to put my rain jacket on at any point, but conditions were certainly not what I would call good.  I can’t complain though, since the weekend still had all the good earmarks of success – first ascents, new areas, grade consensus on previous first ascents, along with some good old-fashioned crushing!  My only goal for the weekend had been to log in some outdoor bouldering mileage, in preparation for the Hound Ears Competition coming up in a few weeks.  I wouldn’t want to be outside in conditions like these all the time (which is why we relocated to Charlotte, and not Seattle…) but I suppose this is what we Southerners get for complaining so much about the summer heat!

3 Responses to “Morning Drizzles in the Highlands: AKA Life in the Clouds”