***A few of you got a sneak peek at this post earlier in the week, when it accidentally went out to my email subscriber list on Monday.  For those of you that read it before I got a chance to “unpublish” it, you’ve had time to think up a great caption all week, so I’m expecting great things!

Many thanks to all who participated in the last “Name that Caption.”  Grace Chu was the popular winner, although in my opinion Nicole H was a close second…  So today’s pic has an interesting back story that technically began long before we moved into our new house this past May.  The pumpkin you see below was reaped out of a garden we did not sow.  Our next door neighbors are avid gardeners, and apparently decided to use their Halloween Pumpkin as compost for their garden last fall, which just so happens to be planted along a fence adjacent to ours.  About a month or so after we moved in, we started to notice a happy little green vine inching its way over onto our side of the fence.  I asked our neighbor about it, and she was as curious as we were, as the vine didn’t look like anything she had planted.  Turned out some of the composted seeds from the year before had taken root, and we had our very own pumpkin patch!  Our small section of patch yielded only one pumpkin, but what a specimen it was! A large, perfectly shaped gourd, with just the right amount of orangey brightness.  It’s too bad it peaked a few weeks early and probably won’t make it til Halloween.  Cragbaby, on the other hand, was thrilled when it came time to pluck his pumpkin out of the patch. 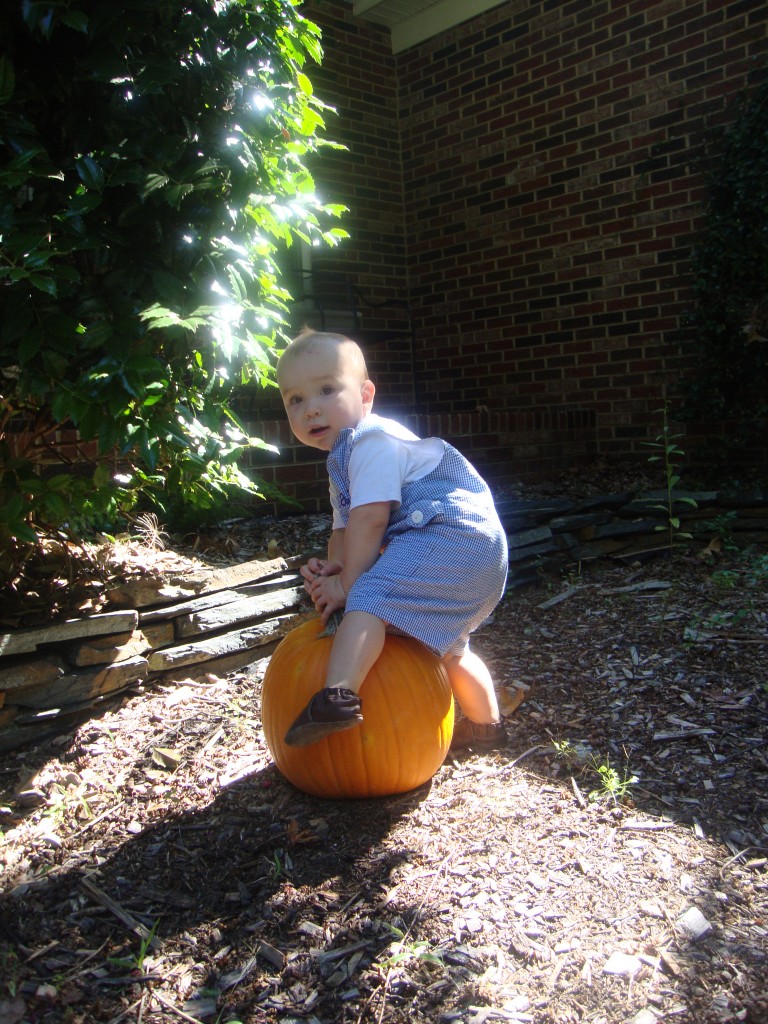 Our pumpkin is now proudly on display in our front yard.  C visits it every morning, patting it enthusiastically and pointing at it.  I’ve been wanting to get a nice photo of him with his very first pumpkin, so when he was dressed nice for church a few weeks ago I thought I would have my chance, and snagged my camera as he toddled his way over to it.  I asked him if he could please sit down beside the pumpkin, and I think this is where things got a little fuzzy in the ever-sharpening mind of an 18 month old.  Apparently C heard me say “sit,” “please,” and “pumpkin,” and, while not comprehending the word “beside,” substituted a word he was more familiar with – “climb.”  Which in turn led to a barrage of laughter from us, leaving a sweet boy slightly confused about whether or not he was accurately following directions.

There’s the back story for ya.  Now its your turn – name that caption!  (And as always, free stickers for all participants!)

4 Responses to “Name that Caption: A Slightly Awkward Picture with a Pumpkin…”