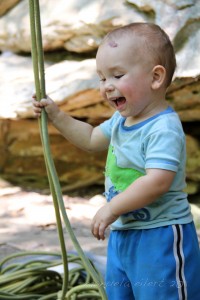 Who's up next guys? Cragbaby on belay duty!

With Hurricanes Lee and Katia closing in on all sides, we were extremely lucky to get 2 days of great weather on our Labor Day climbing excursion to the Obed Scenic River.  This was substantial improvement over our last Obed trip, when we dealt with thunderstorms every few hours for the entire weekend.  Our posse ended up being a fairly large group, with a wide variety of climbing abilities and goals represented, but what very easily could have been a logistical nightmare turned into a weekend filled with adventure, laughter, and of course – some serious sending!  ***Note for non-climbers – a “send” is constituted by leading (not top-roping) a route from the ground up with no falls or hangs on the rope.  Different “types” of sends might include “onsight” (first try), “flash” (first try after watching someone else do it), or “redpoint” (after multiple attempts)***

Day 1 was spent at Little Clear Creek, an area we had not been to before.  While the climbing itself wasn’t as good as other areas in the Obed, it was still a great day, and the swimming hole 100 feet from the cliff mades this area well worth the visit.  We had ropes up on a wide variety of routes (I think every person in our group had a slightly different tick list), but here’s what mine looked like…

Finders Keepers (5.10b) – A long tricksy move down low…then jug haul.
Over the Top (5.10a) – Casual jug-filled climbing until the sloper clipping holds at the anchors.
Dickel (5.10c) – My favorite route of the day – Technical movement on pumpy, incut slots, with an interesting topout onto a bulge.
Woke Up on a Railroad Tie (5.10a) – Similar to Dickel, but with bigger holds and longer reaches.
Uni-boob (5.11b) – About as uncomfortable as it sounds…Not a fan of the tiered roof section that ended with a desperate clip.  (Full disclosure: there was a stick clip involved during this section, which for you non-climbers, this walk of shame certainly does NOT count as a send, but at least it keeps everyone safe…)
Sweat Lodge (5.10b) – Pumpy climbing on good holds and good rock.  Felt pretty darn hard for 10b.

The highlight for many however, was the post-climbing dip at the swimming hole.  The area had two different levels that during high water would be split by a waterfall, but during low water was only separated by a little bit of scrambling.  Lots of boulders of varying heights hung out over the deep water in the lower section, providing the perfect opportunity for us all to showcase our best cannonballs.  The upper section was filled with shallow water about a foot deep, which meant that Cragbaby not only had his own private kiddie pool to splash around in, but also had a bird’s eye view of the diving shenanigans taking place on the lower level! 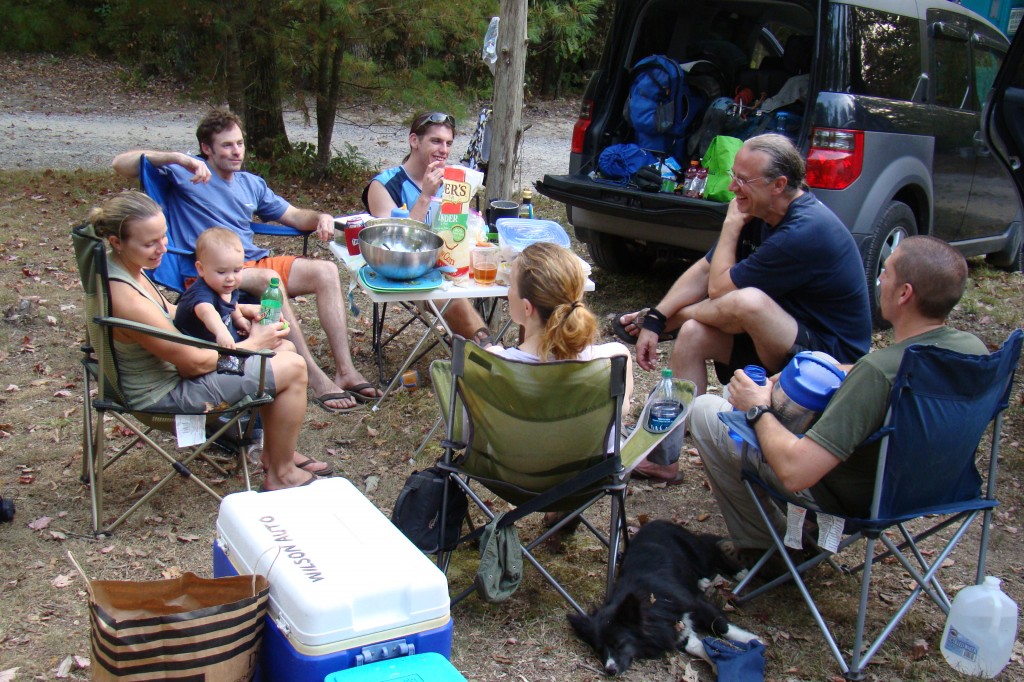 The crew enjoying our Mexican Feast

As exhilarating and refreshing it was to plunge into the spring-fed mountain pool, the hike back was a hot and sweaty reminder that we were destined to be a stinky crew all weekend.  After some merriment and a Mexican feast back at camp, we woke the next morning to cloud cover and a few ominous breezes.  Since no one had a signal, we had to go back to the pre-iPhone era of trusting the weather report we’d seen on Friday afternoon, which hadn’t called for rain until the late afternoon.  We hiked down to South Clear, which is probably my favorite area at the Obed. 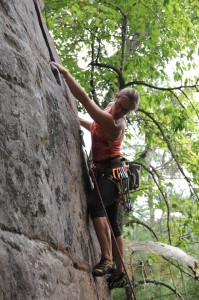 April headed up to the Best Seat in the House (5.9)

Prophet 5.11b – Pretty stout for us shorties…powerful boulder problem start and a tricky dihedral section in the middle.
Spawn 5.10b/c – I’ve seen this route listed as everything from 10a (definitely not), to 10d (probably not that hard).  I think the new Obed guidebook’s 10b/c is right on.  Regardless of what the actual grade is however, if you climb 5.10 it’s a must-do!  Steep climbing on great holds with a couple of fabulous rest stances to catch your breath, with a spectacular view all the way down to the river as your reward at the top!  I was really proud of the hubster for snagging the redpoint on this one! 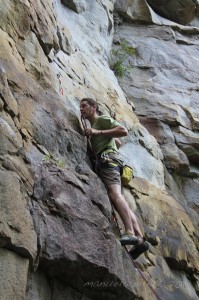 Paleface 5.11a –   This route had epic written all over it from the get go – a very intimidating line that wandered up a broken flake system onto a spectacular exposed white face.  It was just Cragbaby and the girls, since the big boys were finishing up at Spawn, so we were glad we had brought our mack-daddy stick clip with us, since I needed every inch of the 16-foot extension, along with my full tippie-toed reach to get the first bolt clipped.  The traversing nature of the route made for a heady lead even in the more moderate sections down low, especially with the giant spider guarding the 1st bolt.  (I knocked the 3 inch beast off with a sling as humanely as I could, and watched him sail 30 feet downward with his legs sprawled out like a parachute…) Upon reaching the crux, I was a little worried about penduluming into the the dihedral to my left if I botched the next clip, but I took a few test falls at the start of the crux, and decided that a soft catch from further up would swing me well below the dihedral.  Once I committed to the crux I had a brief moment of panic when I realized that I couldn’t clip from the stance that I had expected to, but after 3 more moves (and another 5 feet to the right…) I found a jug that made hanging the draw pretty casual despite my racing heart rate.  As I lowered, I rehearsed the crux moves several times on toprope, and felt like I had it dialed. 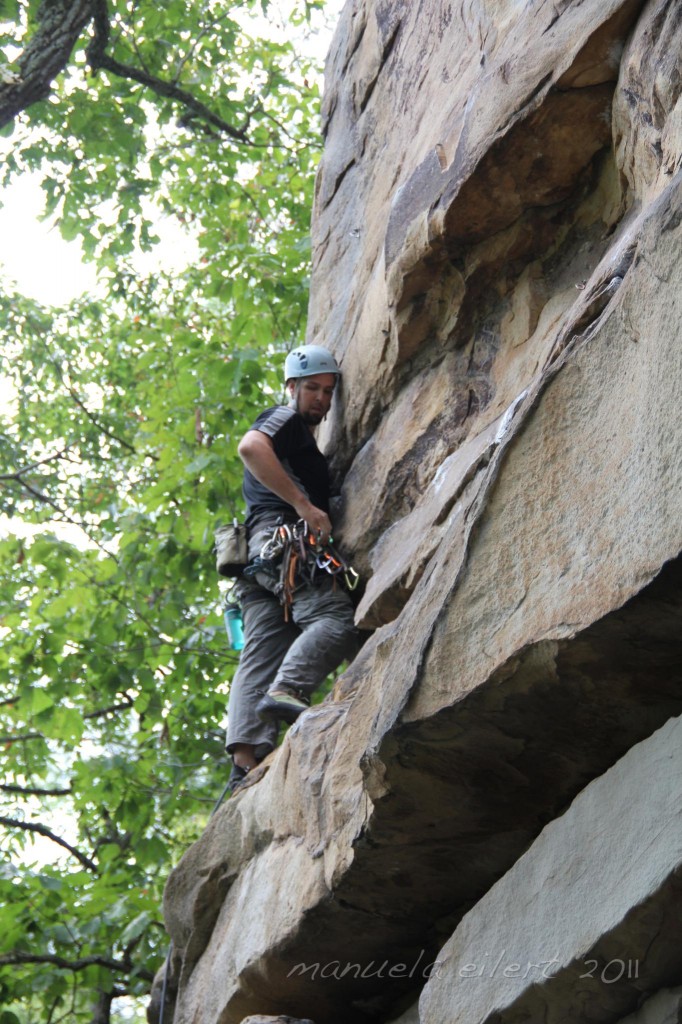 Steve on his redpoint run of Nosebleed Section (5.10a)

About an hour later, when Cragbaby was asleep and everyone else was focused on other routes, I snagged my favorite belayer (thanks hubby!) and quietly pulled the rope and made my redpoint attempt.   While lowering after the first time, I had hung an extended sling on the quickdraw after the crux, although I hadn’t decided whether I was going to utilize it or not, since it would mean stopping mid-crux to clip.  The second time around felt a million times smoother, and the crux went off without a hitch.  I did end up clipping the extended draw mid-crux after finding a key kneebar. I was pretty pumped after the crux, so I took advantage of the good rest stance before finishing up the long, airy moves from jug to jug at the top.  Certainly not my hardest send, but probably one of my prouder ones, and certainly one of my most memorable!  Not sure that I’d do it again, but I would recommend it to anyone confident on lower 5.11’s looking to challenge themselves mentally.
Pet Sematary 5.11a – Boo, still no send on this overhanging sloperfest, even though I tried it twice – the first time it didn’t feel familiar at all, the second time I fell 2 moves from the top, just like I did last year.  Oh well.  I’m sure the humidity didn’t help, nor did the fact that it was at the tail end of day 2. 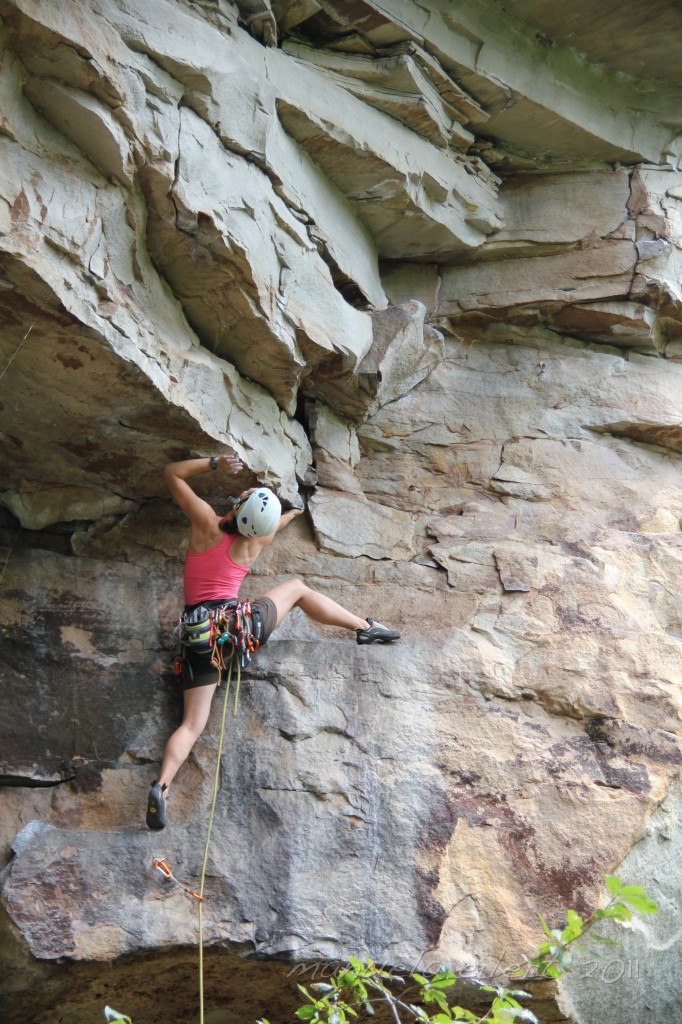 The rain began on our hike out, and once it started, it didn’t stop until we arrived back home in Charlotte 24 hours later.  That meant that the only tick list for Monday was to knock out as many menu items as possible at the local IHOP, in a gluttonous frenzy that only fellow climbers can understand.  I wish the rain hadn’t kept us from climbing at Lilly Bluff the last day, because I had a few loose ends from our last trip that I was hoping to send.  Because of the large group I didn’t really get a chance to work on any new projects, but I was happy to get in a lot of mileage on so many classic lines, as well as quality time with a bunch of folks that I love hanging out with.  Cragbaby learned the correct way to pull a rope, as well as a few social cues, such as giving “knuckles” (or “nucks”, as he calls it.  It was a weekend of tall tales, trash talking, and sweet southern sandstone, and no amount of rain can put a damper on that.  (For more pictures, check out the gallery here.)