What is long, collapsible, assembled from a seemingly random assortment of items from the local Home Depot, and always within arm’s reach of most bolt-clipping sport monkeys?  If you answered stick clip, you’d be mostly correct…add in the word MACK-DADDY and you’d be right on!  For my non-climber readers who think I’m talking about a strange way to interact with zoo animals, here’s a quick primer in Sport Climbing 101… 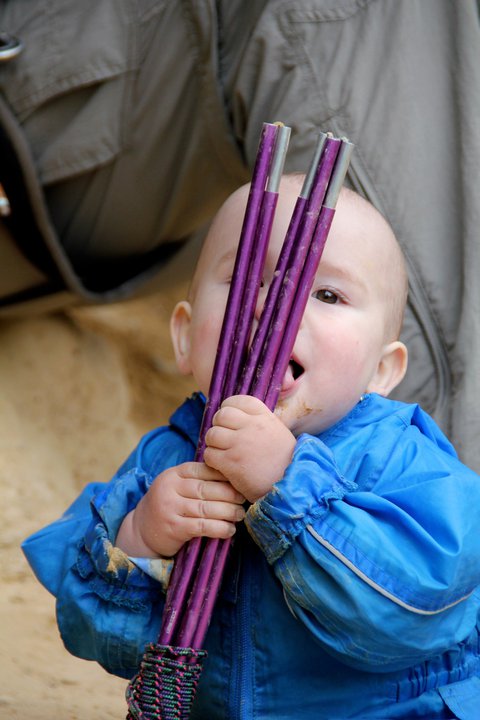 A route is designated as “sport” if the line is protected by bolts every so many feet all the way to the top.  The first climber (leader) ties into the rope at the base, and climbs the route, clipping their rope into the bolt via a removable quickdraw that the leader also carries with him/her.  If said climber falls, the highest bolt clipped will serve as an anchor by which the belayer is able to “catch” the falling climber.  Until the leader reaches the 1st bolt of a climb, there is no established anchor point, and therefore any fall would be a groundfall.  Usually the first bolt is in the vicinity of 12-15 feet off the ground – not death-defying territory by any means, but depending on the difficulty of the moves to reach the bolt as well as the landing zone at the base, a poorly timed fall could very easily result in broken ankles, wrists, tailbones, etc.

That’s where the stick-clip comes into play.  This nifty apparatus does the dirty work of clipping the first bolt for you.  Though some (usually trash-talking novices or hard-core trad climbers) might scoff at the stick clip and call it cheating, most climbers are in agreement that the stick clip is an easy and convenient way to mitigate risk. 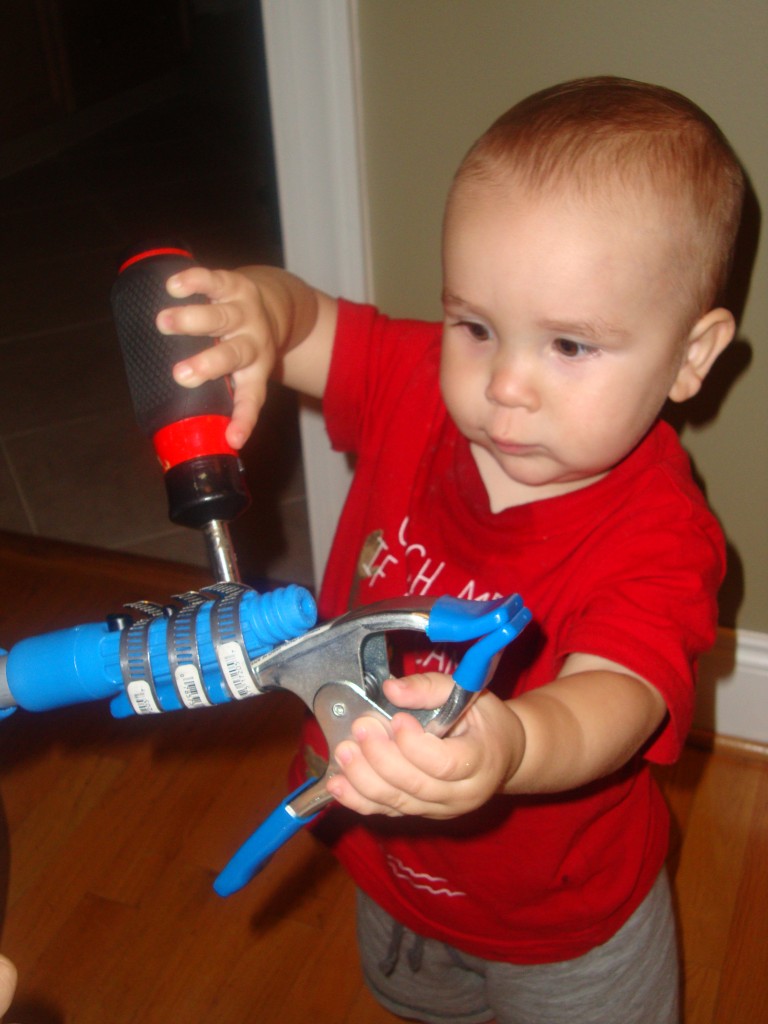 The lucky Crag-Daddy had an eager assistant to help with assembly.

For a long time we used the Epic Sport stick clip.  The great thing about it was that it was made out of tent poles, so it was not only lightweight, but was collapsible enough to slide into one of the outside pockets on my hubby’s pack.  The downside however was that it was made out of tent poles…so when fully extended to use for a really high bolt, it would bend and wobble all over the place, often causing frustration for the end user as well as a few laughs from those watching (which in turn usually brought about more frustration for the end user…).

We were the envy of our friends at the crag – no matter where we were climbing, we always had a stick clip ready and available.  However, in recent months, Steve and I started to become increasingly annoyed at our compact pole’s limitations.  Some areas in the Southeast (particularly the rare breed of bolted routes you occasionally find in North Carolina), are known for having insanely high first bolts – this past spring it seemed like every thing we wanted to hop on has had 1st bolts in the 20-30 foot range.  So this summer we gave in and made our own mack-daddy stick clip – forever outing ourselves as bolt-clipping junkies to anyone within miles of our gigantic pole. 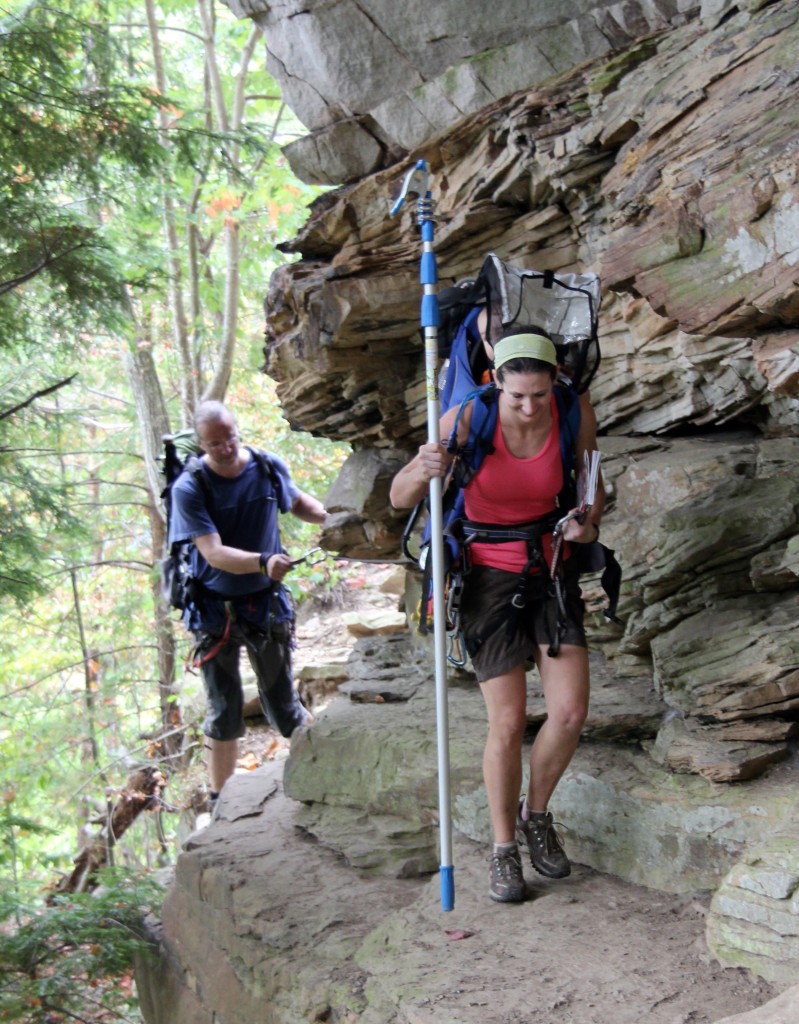 Our new pole reaches a whopping 16 feet at full extension, with no bend or sway.  Add that to my hubby’s 6’1” frame and +3 ape index, and we like to joke that we could go around setting up topropes if we wanted to.  The pole is made from 3 collapsible parts, so it packs down to 6 feet in length.  This is still reasonable to carry around, and doesn’t cause issue fitting into most cars.

Once we found the extension pole that we liked, we had to equip it to handle the rope/quickdraws.  Trango makes an attachment for that very purpose called the Squid, which some folks swear by.  Another popular one is the SuperClip.  We found them both to be rather expensive with quite a learning curve to use.  We opted for the ghetto dirtbag climber version…the alligator clamp.  Overall, we’ve been really happy with it, and would definitely recommend it to anyone looking to make one.

Advantages to our Set-Up –
– Cheap – We got the whole shabbang for around $30.
– Sturdy and Cragbaby-proof – C loves playing with sticks/poles/etc, and almost broke our friend’s Squid one day.
– Multi-functional – Not only can this set-up hang draws, it can also hang a rope into a pre-existing draw, as well as take a quickdraw down.  It is also easy to pull the rope for the next leader while keeping the 1st bolt clipped by hooking the clamp handle onto the rope above the 1st bolt.  (Stay tuned for a later post with detailed instructions/photos on how to do all of the above…)

Disadvantages to our Set-Up –
– The clamp is big, and sometimes its hard for my small hands to open it with one hand while putting in the quickdraw with the other hand.  Once its open, I can easily hold it that way with one hand though, so worst case?  I open it with both hands and then have my belayer hand me the quickdraw.
– We had a few problems in the beginning with the rubber tips popping off of our clamp handles – nothing a little glue couldn’t fix.

Not being home improvement aficionados, it took a bit of perusing to find exactly what we needed (telling the average Home Depot employee you are looking to make a stick clip probably won’t yield that much help).  So for those in the market or looking to upgrade their stick clip, here’s a list of what you need verbatim, in official hardware terms.

Extension Pole – Numerous different lengths available.
Spring Clamp – Commonly known as Alligator Clamps, they come in several sizes.  We opted for 5 inches long with a 2 inch opening – the bigger size makes removing the quickdraw from the bolt, and putting the rope in a pre-hung draw much easier.
Hose Repair Clamps – You’ll need three of these little guys to attach the spring  clamp to your extension pole.

Anyone else have this set up or a different one?  Love it?  Hate it?  Discuss…