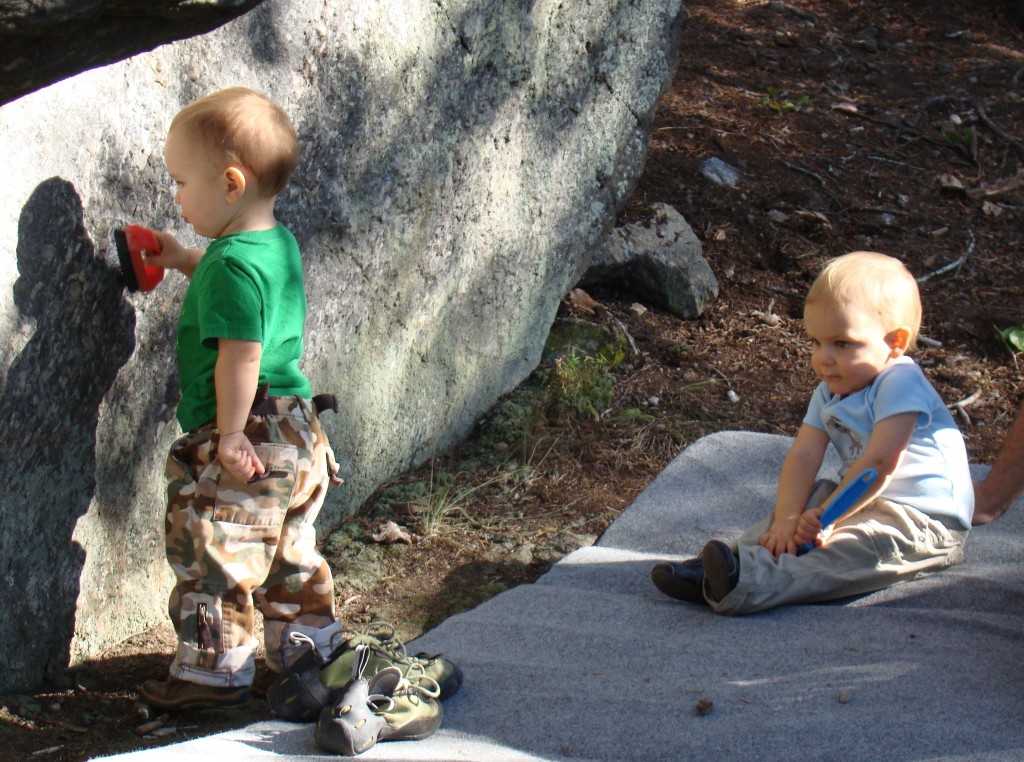 Cragbaby teaching his new assistant how to brush off holds.

We had a few things to get done this weekend (not the least of which involved taking Cragbaby to a pumpkin patch), but the weather was too good to pass up – so we ended up spending Saturday at our local bouldering area – Dixon School Road Boulders.  We actually had spent a quick evening session there once back in the summer of 2009 – Steve was in Charlotte on business, and since I was teaching at the time and out of school for the summer, I’d gone with him.  (It turns out I was also pregnant with C at the time, but didn’t know it).  Ever since we moved to Charlotte we’d been itching to check it out again, especially since our friend Matt recently published a guidebook to the area, but have been waiting for the weather to cool down a bit, since the area bakes in the sun. 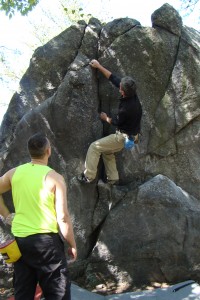 We had a decent sized crowd – but everyone knows that when it comes to pebble wrestling, having more is merrier.  Among the ranks of our crew were Guidebook Matt, the Infamous Gus Glitch (responsible for much of the development at Dixon and Crowder’s, not to mention a host of other crags across the Southeast and parts of Colorado), his lovely and soft-spoken wife Monica, as well as a family from Columbia that we had only officially met that day. 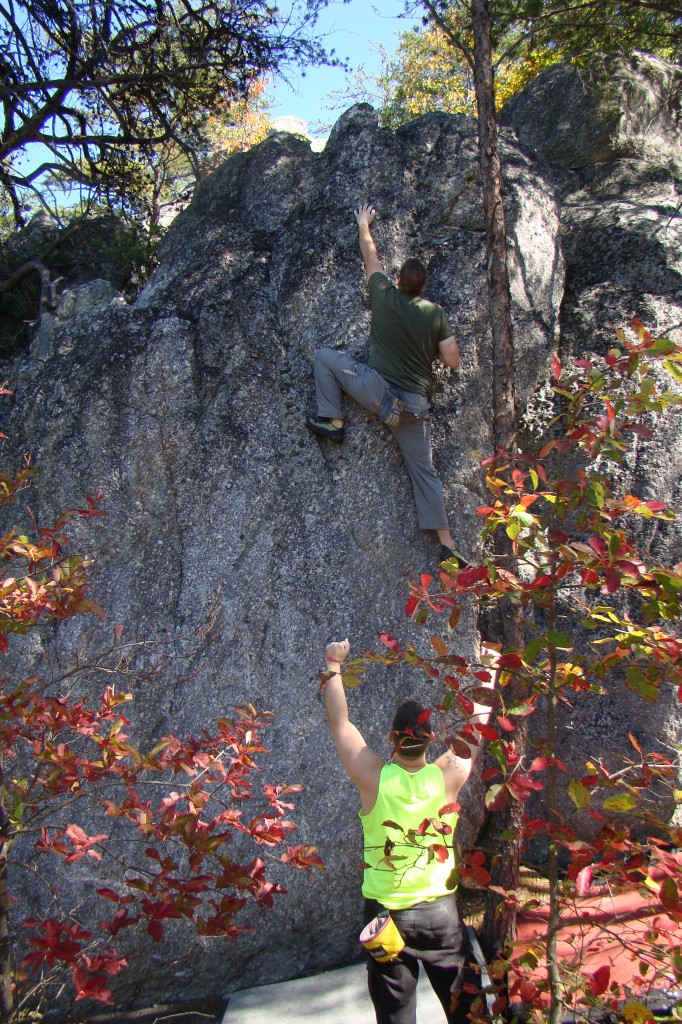 The rock quality at Dixon is good – its a metamorphic rock that feels like a sort of conglomerate limestone.  Its sharp, gritty, and fun to climb on.  Although there are plenty of hard lines to be found (even a few classics in the V8-V10 range), the majority of problems at Dixon are v4 and under.  Most of the topouts are pretty straightforward, which is good because a good percentage of the problems there are highballs (in fact many of the hard lines were originally rehearsed on toprope numerous times).  Toproping is no longer allowed at Dixon, otherwise I’m sure it would be crawling from top to bottom with boy scouts, outing clubs, and the like. 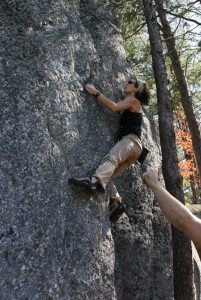 Matt’s whirlwind tour had us on the move all day – I think I racked up a grand total of 16 problems.  Here’s my list…

Welcome to Dixon (V0-) – easy highball slab, probably 5.6-ish.
Jerry Springer SDS (V1) – Threw in the sit down start for an extra move of fun
Final Thoughts (V1) – Long moves to big jugs.
Chode (V2) – Highball, but the business is in the first 10 feet.
Lance Armstrong (V4) – Even though a foot pop getting established ruined my onsight, this line was definitely a highlight.  The start was low on a rail with awkward feet, followed by a core-intensive move up and into a small undercling sidepull.  Then move out right to a jug, followed by another monster-sized move.  I was actually pretty surprised that I was able to commit to the move (thanks spotters!) and even more surprised when I latched onto an even bigger jug than the one I’d been on.  Same easy highball finish as Chode. 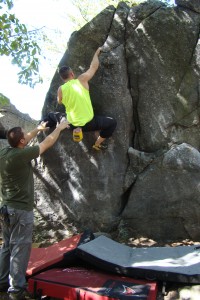 Matt working through The Rattler

Power of Attorney (V1) – Fun and casual romp up the left side of the Old Folks Boulder
Depends Var. (V3?) – Turns out we finished wrong, making this route a lot easier than the original line.
Backsplinters (V3) – A very aesthetic line up a beautiful pebbly arete, with a sweet right hand cross to transition onto the face.  I think everyone’s consensus was that V3 seemed kinda soft.
The Rattler (V2) – A right trending traverse with a left heel and a perfectly placed 1/4″ edge
Snake Jam (V4) – Big move off the deck to a key hand jam, top out same as The Rattler…also felt a little soft, maybe would have been harder without the jam?
Unicron (V4) – A few tenuous but very cool moves up a left hand crack and right hand arete with a tall but straightforward finish.
Megatron (V2) – This felt really stout for the grade to me, but was a fun line up the right side of a sharp arete on the Decepticon Boulder.
Galvatron (V3) – In my opinion, the best problem of all that we sampled – the type of vertical face climbing that us roped-climbers wished would go on for 100 feet! Solid V3, with a pretty high crux (but a great landing zone). It might feel a tad easier if you are taller and can reach a couple of key holds without moving your feet up. This one took me a couple of tries to work my feet up at the crux.
2+2=5 (V3) – A powerful crank off of a high right heel was the ticket for me on this one.
Baleen (V2) – A fun 2 move problem ending with a beached whale mantle.
Disinformation (V2) – A couple of committing moves along an arete followed by a high but secure finish on a big horn. 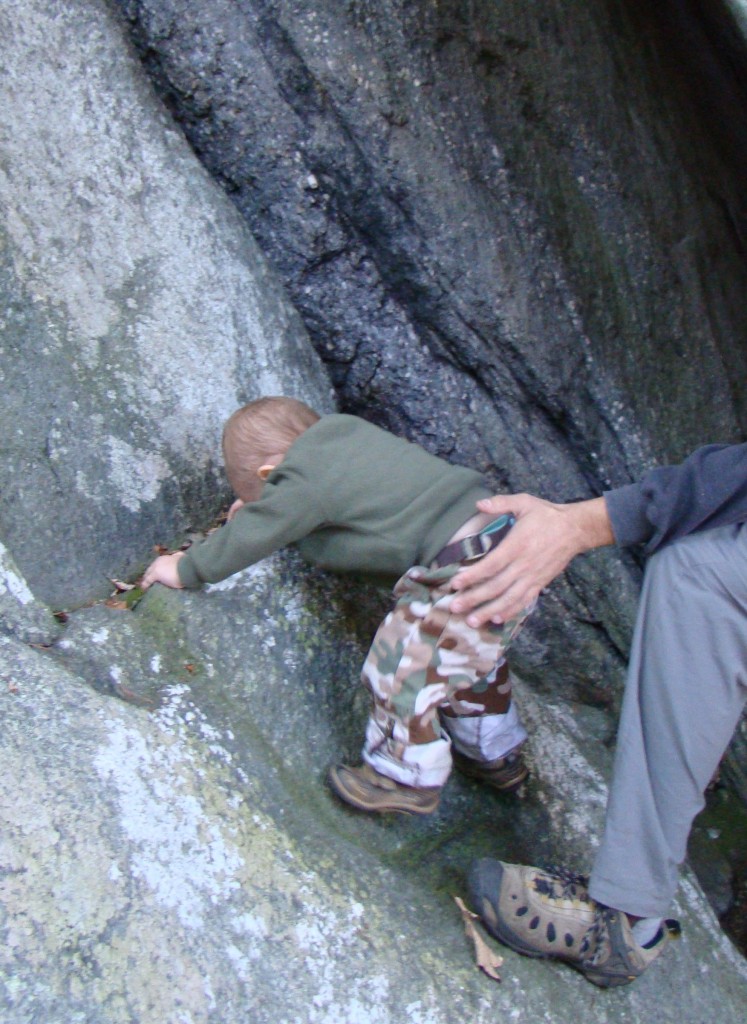 Cragbaby projecting the scramble to the TMI Boulder

Conclusions?  Dixon is a fun tromping ground to have basically in our backyard.  We didn’t delve into anything super tough, but it was still a great day. Many thanks to Matt for putting together a fabulous introduction to the rock at Dixon.  It was exciting to get acquainted with our local bouldering spot, the weather was spectacular, and Cragbaby was especially excited to have a younger “assistant” to help him brush off holds.  What about everyone else – who got outside this past weekend?

3 Responses to “A Day at Dixon”