Ah, fall.  Always ushered in for our household by the first Saturday in October, where we head up to the High Country of western North Carolina with the other “pad people” to pretend that we are pebble-wrestlers (aka boulderers).  Even though roped climbing is more of our “thing” (as is evident by anyone hearing me on a mantle topout), we like to get our boulder on occasionally as well, and ALWAYS on this particular Saturday for the Hound Ears Bouldering Competition.  This annual shindig is the first in a series of 3 comps collectively known as the Triple Crown.  My husband Steve and I keep saying that one of these years we’re gonna do all three, but we never seem to be able to justify the long drive for the other two (Stone Fort in TN, and Horse Pens 40 in AL), always figuring that if we were going to be in the car for that long, we would want to spend our time climbing more than 15 feet off the ground. 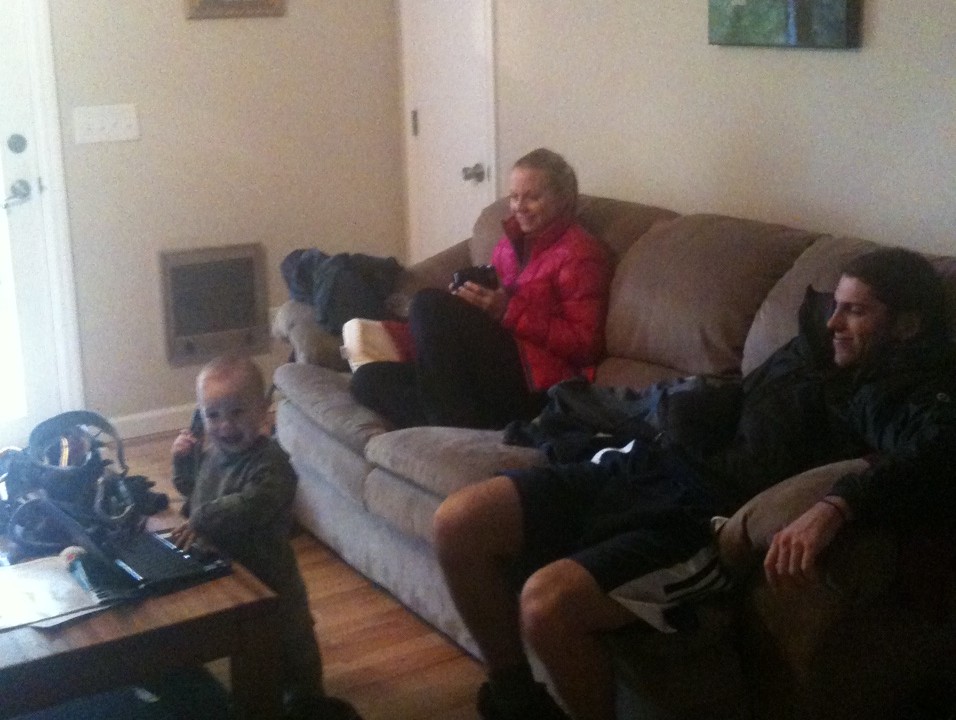 Cragbaby updates his facebook status and calls his sponsors to inform them of the postponement from the comfort of Caleb's living room.

Anyway, we’d been looking forward to this comp for months.  And after taking a trip up to Grayson a few weekends ago as well as focusing a lot of our recent gym training on bouldering, we were both feeling strong and couldn’t wait to crank until our fingertips fell off.  Last year I’d surprised myself by taking 3rd place in the V3/V4 category, and was hoping to beat my previous year’s score.  All week long the excitement continued to build, as friends started talking-trash on facebook, bloggers posted beta videos, and Steve and I got out our little paper guidebooks from previous years to plot out an efficient plan of attack.  The weather conditions were looking stellar, almost too good to be true –  the forecast was for temps in the mid-40’s, that sort of dry cold that friction lovers can only dream about this early in the season.

But all of that  psych came screeching to a halt when we stepped out of the car at the campground Friday night to bone-chilling wind and dark, gray, drizzly cloud cover.  Apparently the forecast had shifted just hours before to accomodate a wet weather system that was barreling over the mountains, bringing in not only record-breaking low temperatures, but also sleet and snow. 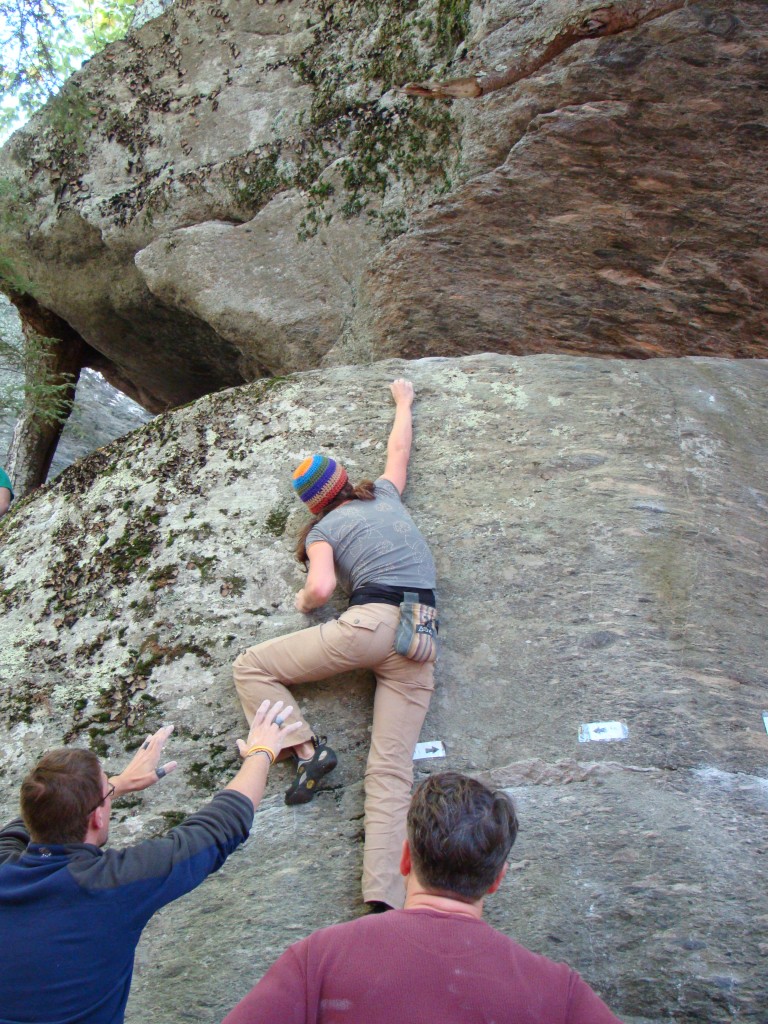 This is what we wished we were doing...(taken last year)

We tried to be optimistic about the weather report – though we knew it would be cold, windy, and foggy, the chance of precipitation was only 30%, so we were still excited.  What was less exciting, however, was the prospect of sleeping in a tent through 60mph wind gusts, temps approaching freezing, and possible wintry mix – all so that we could deal with wet rock the following day.  We were just commenting on how much our tent was getting battered already (and wondering how on earth Cragbaby could sleep through it) we ran into Caleb (insert angelic music here), whom we’d met last weekend at Pilot Mountain for our mutual friend Bennett’s Comeback Day.

Last week Caleb had mentioned that he lived minutes away from the Hound Ears boulderfield and that we were welcome to crash with him the night before if we didn’t feel like camping.  We’d briefly considered it, but decided against it since he had also said that there might be a lot of other folks taking him up on the same offer.  We figured nothing would ruin the house party atmosphere quite like a family strolling in with a baby ready for bed, so we gratefully declined his offer.  But when Caleb magically appeared at our campsite Friday night and informed us not only that his other friends had all bailed on the weekend, but that we would be able to have a bedroom to ourselves with Cragbaby, it was a no brainer!  We got a refund from the campground, broke down our tent, and were there within 15 minutes. 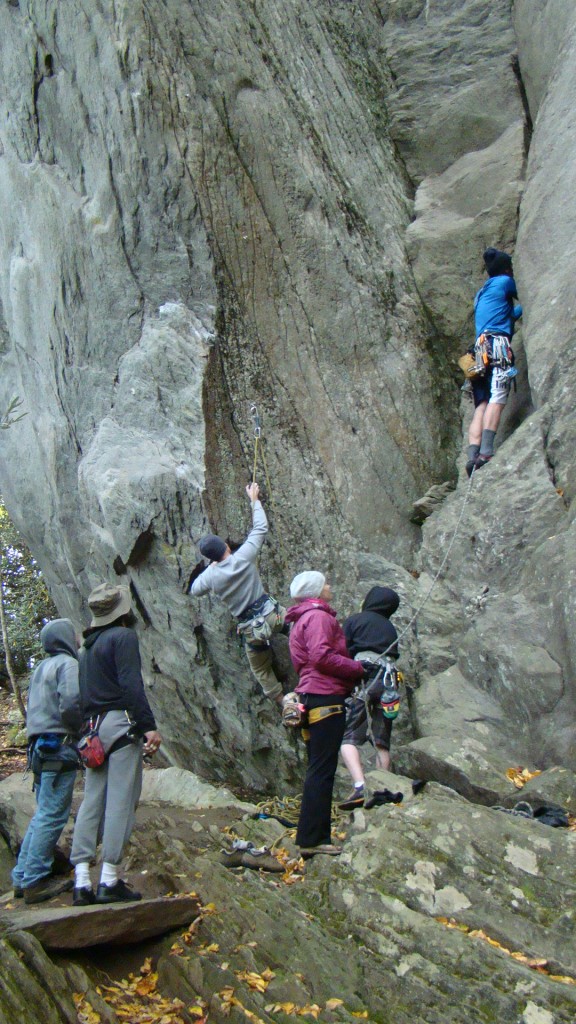 ...but at least we still got to do this.

When we got there, we realized that Caleb was setting us up in HIS bedroom, our friend April in the guest bedroom, while he and Bennett took command of the couches in the living room.  I was really touched by his generosity to give his room up to people he had known for less than a week.  C went to sleep warm and snug in his pack and play, while the rest of us enjoyed a fun evening of cookies, laughter, and stories to the backdrop of a fierce, howling wind with the intermittent splattering of rain drops.

The next morning we knew it was by no means sending weather, but were hopeful that the show would go on.  We headed back to the campground, put our crash pads on the U-haul, and found the line for the buses. (The boulderfield is within a private, gated community without parking access, so all competitors are shuttled to the area via rafting buses).  We knew it wasn’t good when we we were told to meet back at the stage for an important announcement.  Despite the relatively dry conditions at the campground, reports from higher up at the boulders stated that the rock was soaked and still getting rained on.  Since these conditions were obviously deemed unsafe for a bunch of adrenalized competitors, the competition was postponed until the next day.  Any other year this would have been only a minor annoyance, since we probably would have had plans to stay and climb the next day anyway. 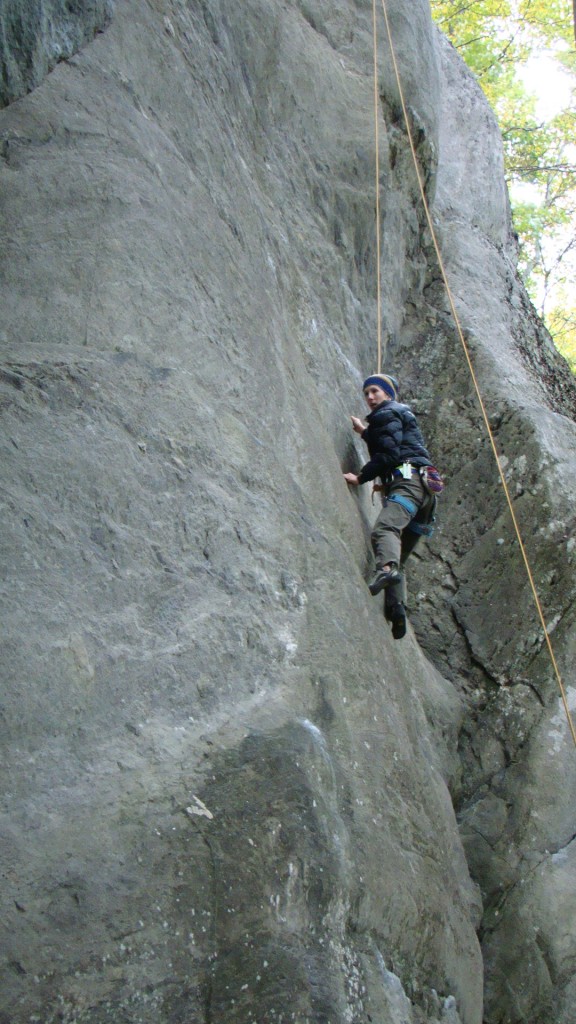 But not so this year – this year we had to get  back to Charlotte Saturday night so that Steve could catch a flight to California for a work conference the next day.  So for us, postponed meant cancelled.  Another way to look at it would be that we spent $50 each on t-shirts that we had to drive 2 hours to pick up.  Regardless of how you look at it, it sucks, and to say we were disappointed would be an understatement.

There was certainly dry rock to be found in Boone, but although we always keep harnesses in our car (doesn’t everyone?!?), the only other gear we had was for bouldering.   However since the rest of our crew had planned to rope up the next day anyway, they convinced us to stick around for a little bit exploring Holloway Mountain, which might as well be Caleb’s personal crag since its literally 100 yards away from his front door.  We’d heard about Holloway before, but never climbed there – its a small area that is popular with local schools for outdoor education classes due to the easy toprope access.  Good news – the rock was high-quality, aesthetic, and dry except for the very top.  Bad news – north-facing walls meant frigid, hand-numbing rock.  Although it probably would have been fun had we been able to feel our hands, the 5.10 slab that we toproped hardly made up for missing out on one of my favorite events of the year, but at least we could commiserate with friends and kill enough time until C was ready for a nap, which meant we enjoyed a quiet, peaceful car ride home. 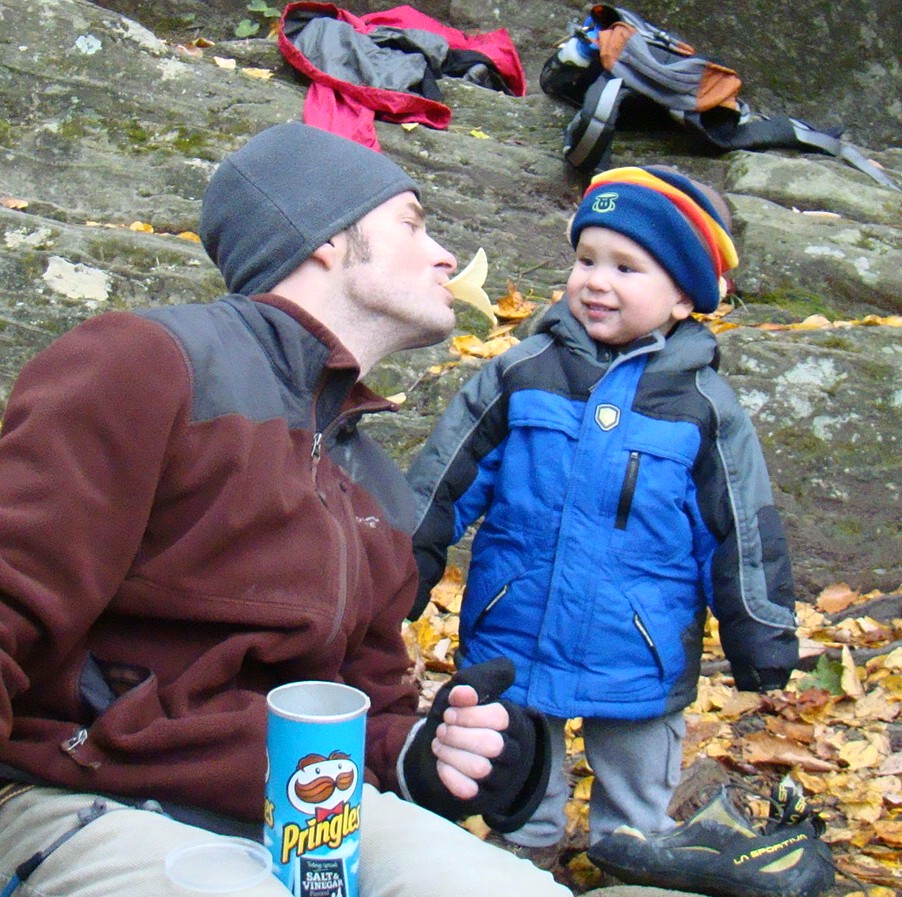 "Seriously Mr. Bennett? Is this supposed to make me laugh?"

I’d be lying if I said we had a great weekend – it was disheartening to drive back Saturday afternoon only to see beautiful weather the whole way.  It would have been much more fun to spend the whole day at home together as a family, especially since C’s Daddy is gone all week at his work conference in Cali.  But I guess you win some and you lose some.  I’d much rather be sitting at the computer complaining about weather than sitting in a hospital complaining about breaking my ankle from a fall on a wet topout.  At the end of the day the decision was made for safety’s sake and it just sucked for us that our schedule was so tight.  At least our entry fees went to the Carolina Climbers Coalition, which will secure more climbing days for everyone’s future.  Next year you can best believe we’ll leave both days open, so no matter what happens, we can take out our revenge on the rock.  But until then, a big thank you goes out to partners that bring fun and laughter along on even the most crap-tastic of climbing weekends!

4 Responses to “Cold, Sleet, Snow, and Generosity…but No Bouldering.”