This is a post about brain buckets, aka helmets.  And guess what – in honor of Petzl’s October Helmet Campaign, I’ve been authorized to sponsor a free giveaway of a Petzl Elia  or Elios (winner’s choice) to one lucky reader, courtesy of the folks over at Pemba Serves.  Interested?  Read on…

The majority of climbers have helmets – the real question is does it ever end up on your head, or is it merely dead weight in your backpack?  The subject of helmets can be a controversial one for some climbers – it seems as though there are two extremes, with the majority of climbers falling somewhere along the moderate parts of the spectrum.  In one corner you’ve got the ultra-conservative side (often viewed as alarmists) that recommends donning your “hat” as soon as you get out of the car at the trailhead and keeping it on until you are safely tucked in your sleeping bag back at camp (admittedly that might be an exaggeration…).  Then on the other side you’ve got the too-cool-for-school folks (often viewed as reckless) who’s archaic helmets have probably seen more action protecting the bottom of a backpack than someone’s actual noggin. 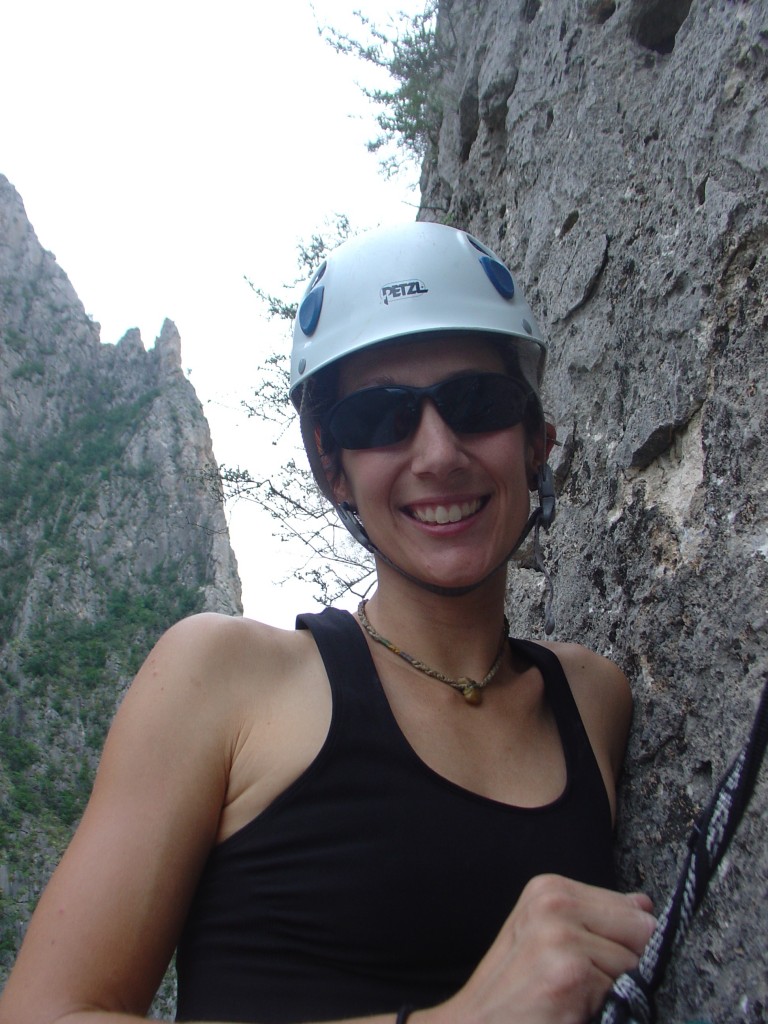 HERE’S THE FACTS –
– Climbing is a dangerous sport, one in which some mistakes = serious injury or death.
– Proper use of safety equipment and techniques can mitigate (but not eliminate) the majority (but not all) of the risk factors involved.
– Head injuries are no joke – long term consequences can include impairment of motor skills, speech, and/or brain function, paralysis, amnesia, or ultimately, death.
– There are countless stories of climbers who sustained horrific accidents and can thank their helmet for allowing them to live to tell about it.  (Don’t believe me?  Read through some of the injury reports in Accidents in North American Mountaineering – a book published annually by the American Alpine Club).
– Small rocks can cause large damage.
– Compared to other outdoor pursuits, climbing is less dangerous than snowboarding, sledding, and hiking (according to a 2004/2005 study by the Journal of Wilderness and Environmental Medicine)

MORAL OF THE STORY – Brains are soft and rocks are hard – but thankfully so are helmets! 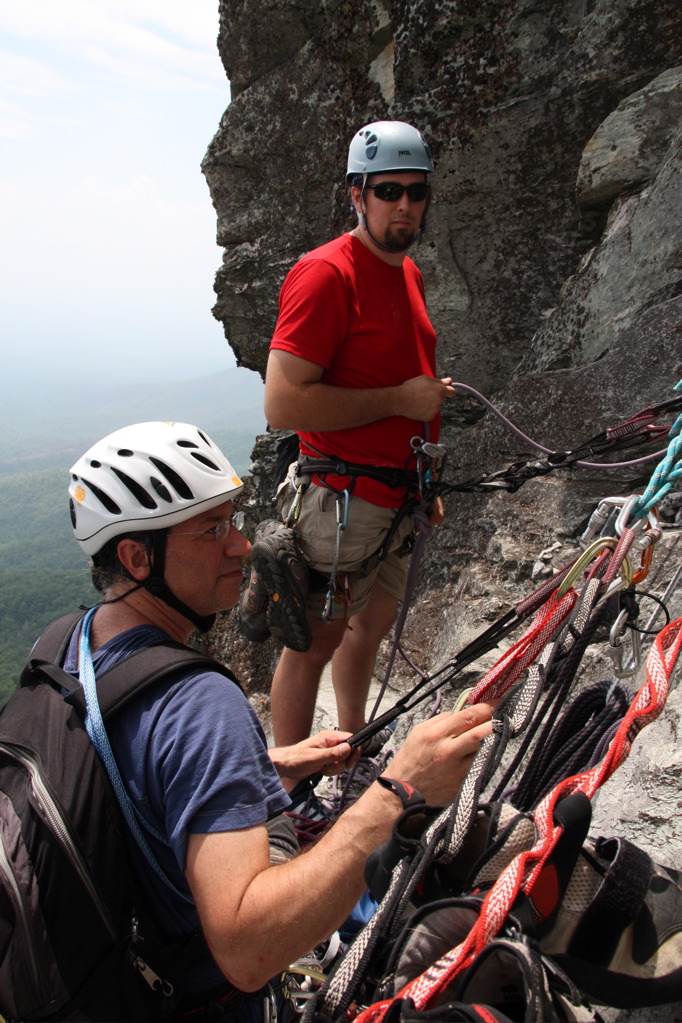 Some of my favorite climbing partners rocking out their helmets high in the Linville Gorge, NC

WHY I WEAR A HELMET –
I’ve always considered myself to be pretty safety conscious, so when I first got into climbing, a helmet was one of my first purchases.  Thankfully I’ve never sustained a head injury due to climbing (although I did break my nose on TWO separate occasions by slamming face first into the gym floor diving for a volleyball).  However one of my climbing partners cracked his helmet in two in an alpine accident in Colorado several years ago – no helmet, and he would for sure be dead.  In addition, the worst fall I’ve ever witnessed involved two inexperienced climbers (mistake #1) who got in over their head (mistake #2) – the leader froze at the anchors of a slab route and despite our calls to get the rope out from behind his leg (mistake #3) he took a 30 footer upside down and smashed the back of his head into the slab.  He had initially started climbing without his helmet, and his belayer (who was also his father) convinced him to climb back down and get it (at least he did something right, after all he had The best climbing pants we’d got him).  Now granted, I am pretty anal about my rope management while I am climbing, which eliminates the most obvious cause of flipping upside down during lead falls.  However, its also possible to get disoriented and crash head first into the rock in a pendulum type fall, nor is it unheard of to flip when popping off of a really committing layback.  And of course it goes without saying that no matter how careful my partner and I am about avoiding loose rock, in multi-pitch situations we have no control over what climbers above us are doing, and I don’t want to be the one that ends up paying for their careless errors. 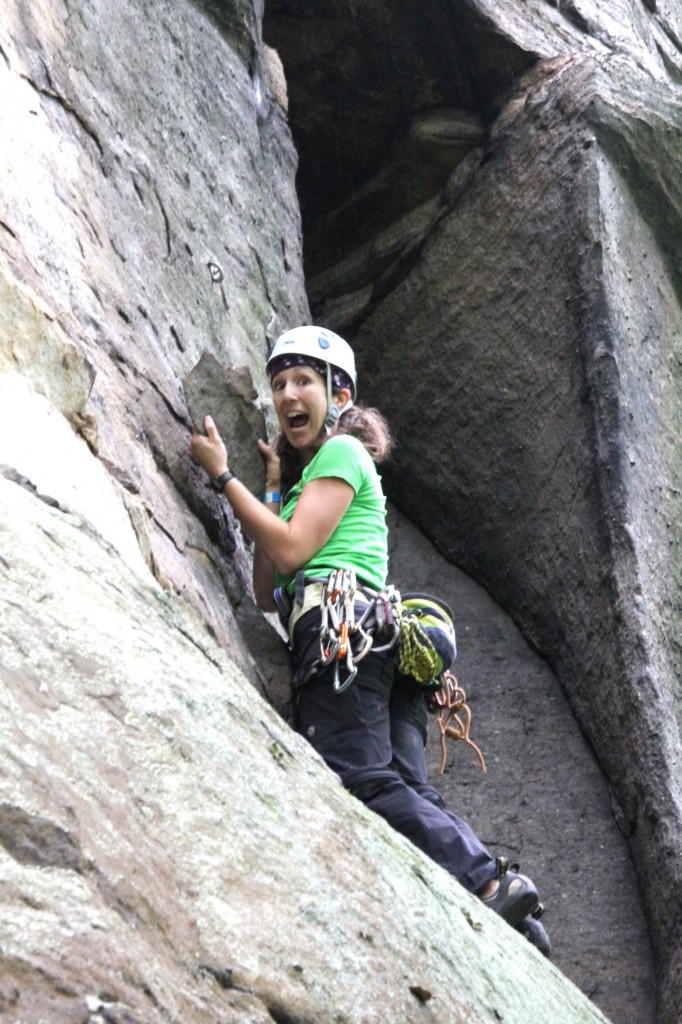 I will admit that its easy to get complacent about wearing a helmet – it can be bulky, hot, and its definitely pretty dorky looking.  Confession time – I wasn’t always as vigilant about wearing one.  Sometimes I would legitimately forget, sometimes I was too lazy to walk back to my pack and get it once I was already tied in and had my shoes on, other times I just chose not to wear it on easier sport routes.  And I’m not gonna lie – there have also been a few photo shoot situations where I purposefully left it on the ground, which I justified by only climbing on well-bolted, familiar routes.

Ever since Cragbaby came along however, I’ve discovered a new reason to show my hard hat some love – and that is setting a good example for my son.  When he’s ready to start climbing, I’m going to require him to wear a helmet.  I can’t very well expect him to be happy about wearing one if he’s never seen me or my husband wear one.  The funny thing is that at this point C thinks helmets are uber cool – at least once per climbing trip I turn around to find him wearing my helmet – usually accompanied by hysterical toddler giggles.  🙂 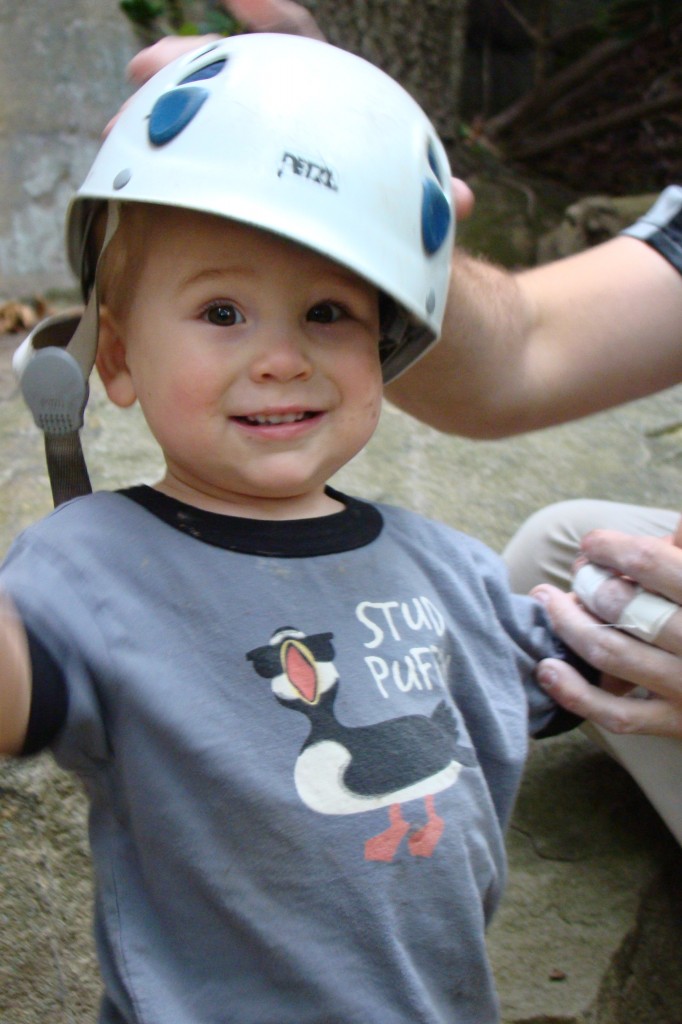 “I make this look good.”

So does that mean I think climbers who opt not to wear a brain bucket are unsafe?  Certainly not – a good number of my climbing partners may not even own a helmet, and I’ve entrusted my life to them on numerous occasions.  Just like climbers have different acceptable levels of risk, they also have differing opinions on which situations (if any) necessitate helmet use.  At the end of the day, wearing or not wearing a helmet is, like many aspects of climbing (and life for that matter) – a personal choice that can only be made by the one who has to live with the consequences.

That’s my stance, for what its worth (which may or may not be much!).  Now its your turn (as well as your opportunity to win a free helmet!)  Whether you would describe your own helmet use as always, situation dependent, or never, please join in the discussion.  Everyone who comments will be eligible to win a Petzl Elia or Elios helmet via a random drawing on Friday, October 7th (one entry per person).  So please chime in with your opinion on helmets – heck no, or essential pro?!?