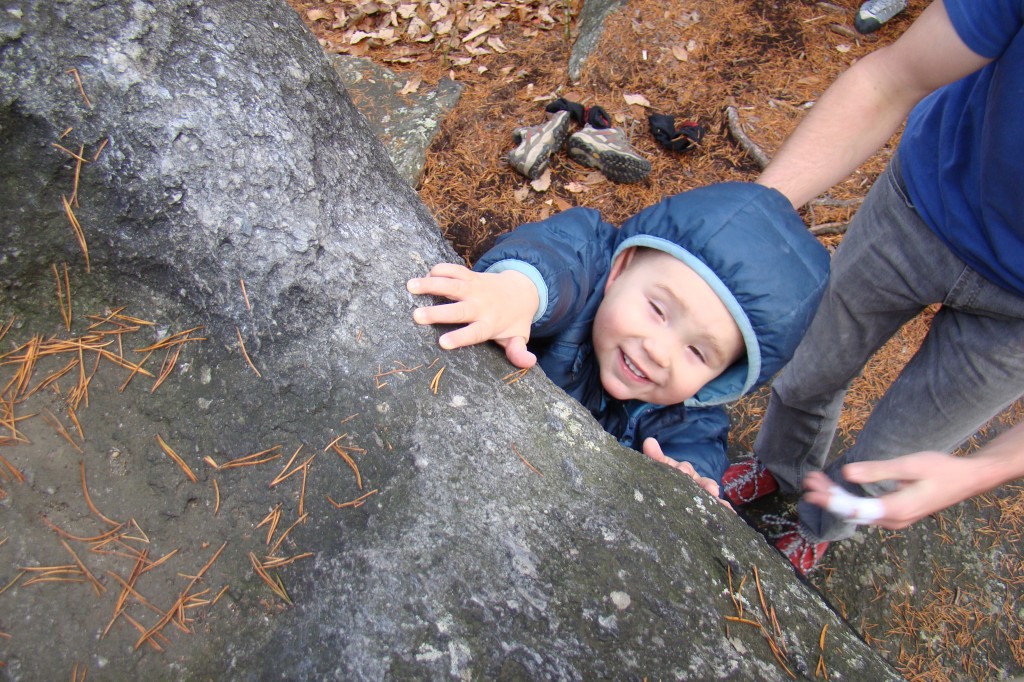 We’d been looking forward to the Dixon Crush-fest Bouldering Competition for a few months, and although we were disappointed when it got cancelled, we didn’t let it stop us from having our own crush-fest this past Saturday.  Besides, Cragbaby and I were both sporting new gear from Icebreaker  and we were anxious to put it to the test (more on that exciting partnership later!). What started out as a chilly morning turned into a great day – what we lacked in sunshine was more than made up for in friction! 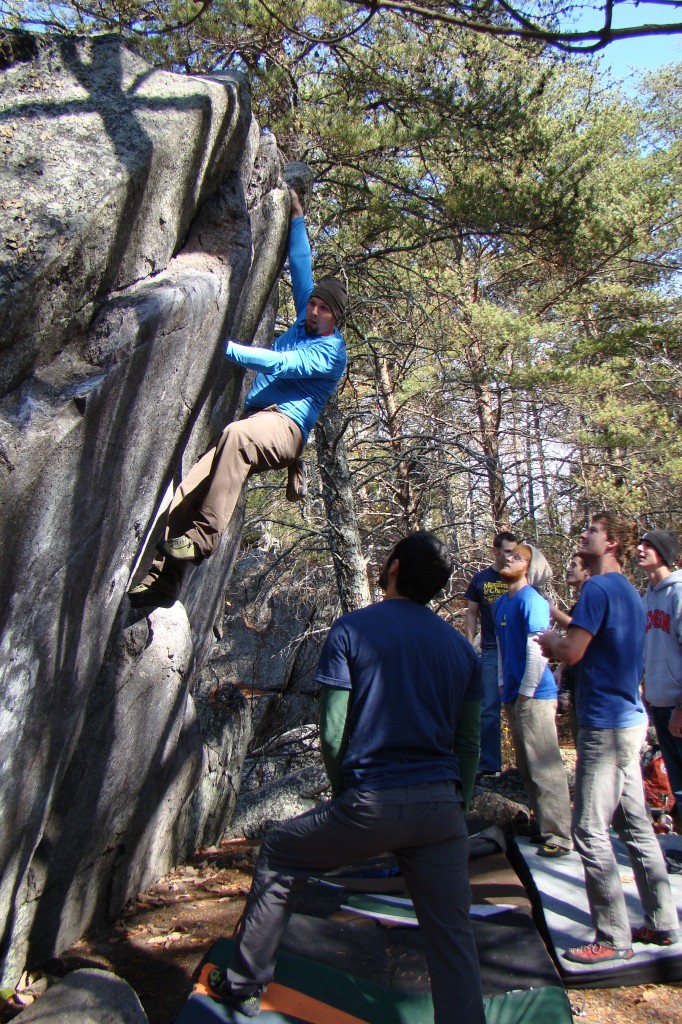 We spent the morning in the Lower Area, where we got the party started on 2+2=3 (V3) and Disinformation (V2).  We played around with a variation on Baleen (V2) that traversed in and made the problem a little longer.  We also hit Classic Overhang (V2), The Rattler (V2), and Snake Jam (V3) before heading up to Venom (V5), which I’ve officially adopted as a project.  The first couple of times I got on it, the initial move felt absolutely impossible for me.  Eventually however, I was able to figure out some beta that worked well enough to not only get me off the ground, but also through the next few moves as well.  The first hold is really sharp, and after several tries I realized that I was working on a pretty good hole in my middle finger, so I decided to move on and save my fingertips for other things. 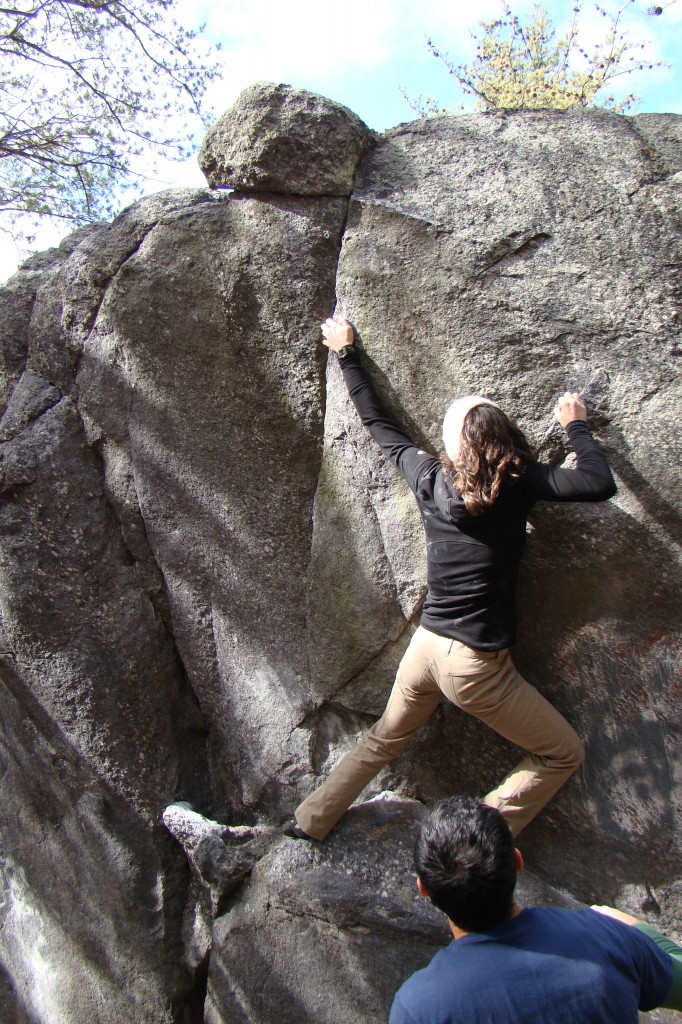 My high point on Venom...still got a ways to go!

Megatron (V2) and Unicron (V3) were next on our list before heading all the way up the hill to Classic Arete (V4) on the Missing Boulder.  This tall, imposing line just might take the prize for “Scariest Moderate” at Dixon.  We’d hiked up to it on our last trip a couple of months ago, but didn’t do anything more than look, due to the swarms of wasps buzzing around at the top.  The wasps were gone this time, but there was still plenty of excitement to be had.  It took us a while to pad up the landing, a 5×5 area that is bordered on the sides by sharp rocks and by a large fallen tree at the back.  One by one everyone finessed their way up the off-balanced arete, fighting off the barn-door to make it to the crux – an ultra-committing core-intensive move from an uncharacteristcally greasy rail 15 feet off the deck.  On my first go I got both of my feet high and left and tried to make a layback move onto the flake above the rail…I couldn’t hold the body tension and literally came off like a cannonball onto my spotters below.  Thankfully they were able to aim me onto the pads so that I could get a soft (albeit butt first) landing.  It didn’t hurt at the time (thanks adrenaline!) but by the time I crawled into bed that night I could definitely feel it, although after a visit to the chiropractor on Monday morning, I was thankfully on the mend. 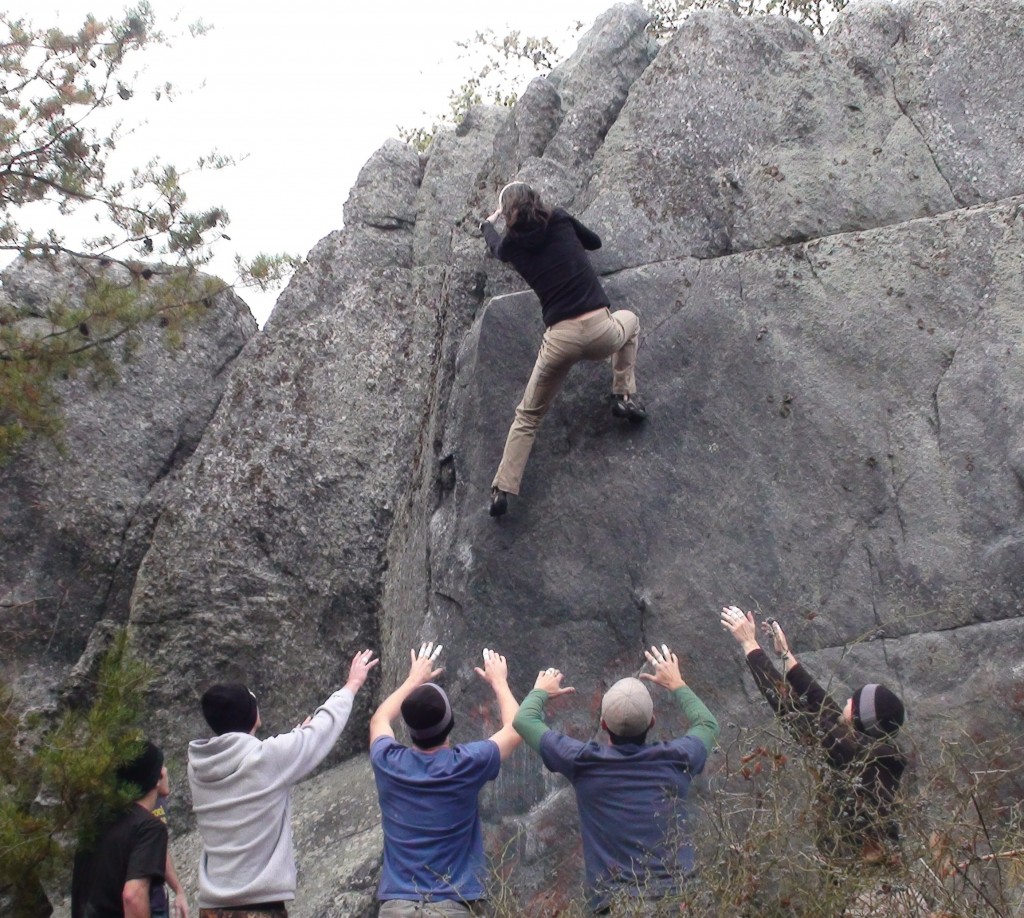 Mid-crux on Classic Arete, with plenty of pads and spotters!

After a few more similarly dramatic bails from other folks, Javier stepped up and got the send train rolling when he discovered two sharp crimpers be could bump to from the rail, along with a couple of high nubbins for his feet.  His casual-looking send was not only inspiring, but the fall potential from his beta looked much safer, (since his body position was more straight up and down), so I decided to give it one more go – and sent!  The new beta worked out perfectly for me, and although I can see why this line gets a classic status, the fear factor of such a high and committing crux keeps it from becoming the kind of thing you’d want to run laps on over and over (at least for me anyway!).  Steve chose to sit this one out and play camera-man, so we did get some decent video of most of the sendage – click here to see our Ode to Classic Arete video collage.

We played around on a few more lines but by this point we were all feeling pretty wiped, so we decided to close out our day with a few runs up the easy lines on the Y-Axis Boulder – Starboard (V1) and Y-Axis (V0).  We timed the hike out perfectly so that we were arriving at the parking lot just as the last few rays of sunlight were dipping below the tops of the trees.  After a lively discussion of The Highlight Reel over dinner amidst a sea of cheese fries wallowing in ranch dressing, and we were still able to make it back home before Cragbaby’s bedtime with 15 minutes to spare!  Here’s a big +1 for having rock within 45 minutes of your house!  What natural playgrounds does your family take advantage of having close by?

4 Responses to “A Classic, A Project, and a Classic Video Project”