While the majority of the country was up at 4am (or never even went to bed…) for Black Friday sales, our household instead celebrated “Slab Friday” at Stone Mountain.  Cragbaby’s Grammy graciously agreed to let him hang with her all day so that Steve and I could not only hit up the area that I am definitely the least familiar with guidebook-wise, but also have the chance to get our multi-pitch on together for the first time since an excursion to the Linville Gorge back when I was 5 months pregnant or so. 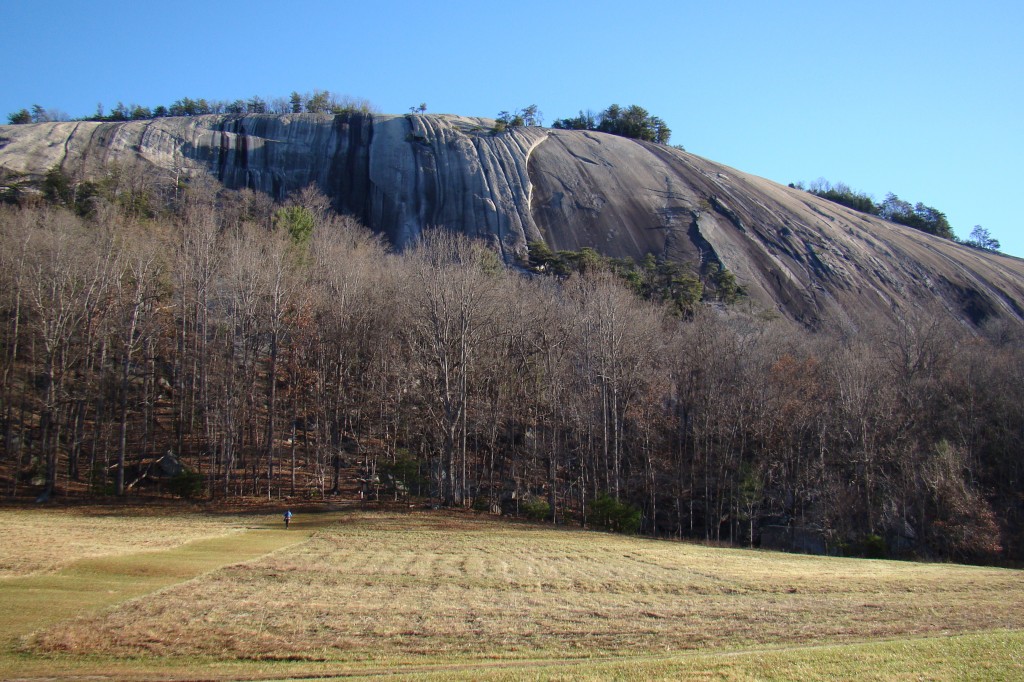 Stone Mountain is one of those areas that has a reputation that precedes itself.  Its not the kind of place you see on a map and decide to head to on a whim without knowing what you’re getting into.  The 600 foot granite dome seems like it may have taken a wrong turn at Albuquerque to end up on the east coast, but nevertheless, it offers some of the best pure friction climbing in the country.  Completely different from the steep quartzite climbing found throughout the rest of the region, this area offers sanctuary for those wishing to give their biceps a break in exchange for putting their mental muscles to the test. 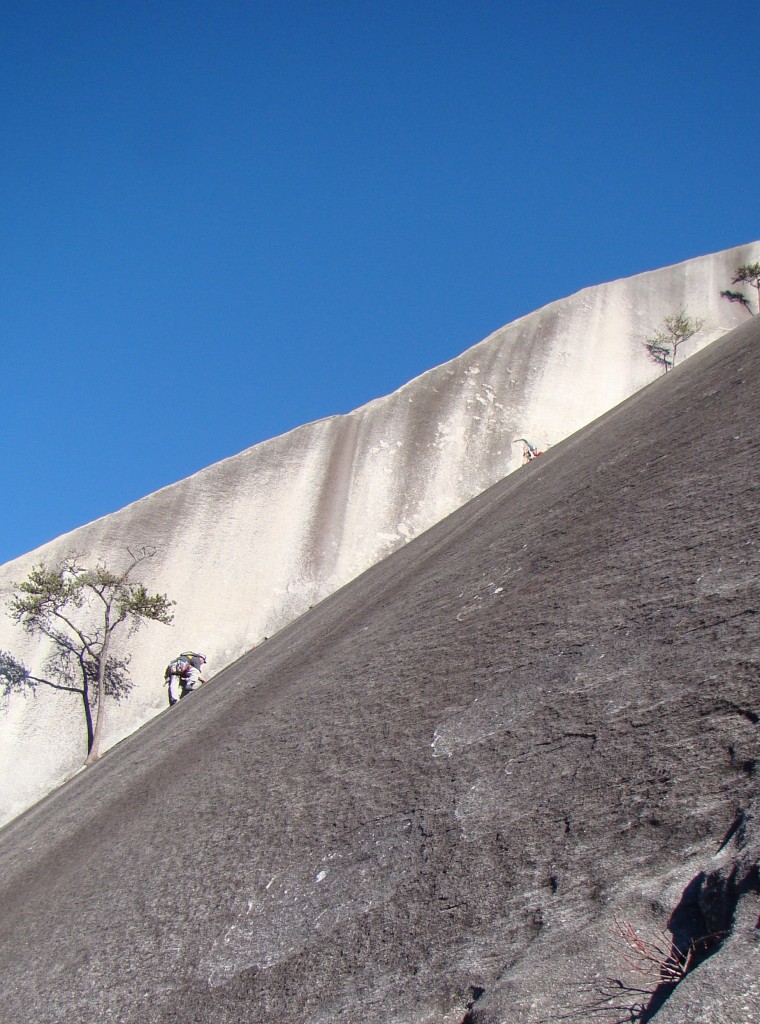 But while Stone Mountain may be famous for its swaths of impeccable granite, what makes it infamous is its jaw-dropping runouts.  Almost all of the lines here were established from the ground-up, meaning bolts were placed on lead (by hand) by the first ascent party.  This bold style means 20-30 foot distance between bolts is considered well-protected, while 1-3 bolts spread out over 150 feet of easy terrain is rather commonplace.  In fact, the notoriety of the runouts at Stone gave birth to a unique belay technique – the Stone Mountain Running Belay, discussed here.  A day at Stone carries the ironic potential for providing a relaxing day of slab paddling for the follower while at the same time a hair-raising, mind-blowing head game for the leader.

Up until Friday, Steve and I had only been to Stone once, back in 2007 when we had first started climbing.  That first visit we’d followed a mentor around the sea of granite all day, and I had done my 3rd trad lead ever on the first pitch of No Alternative (5.4), which is a well-protected left-facing dihedral.   Fast forward a year and a half later to Squamish, BC (dusty, archived trip report found here), where we honed our slab paddling skills in the Little Smoke Bluffs and put them to the test later on in the week on Diedre (5.8).  We started to get an appreciation for slab technique as a legitimate style all its own, rather than just “being able to trust your feet on blank sections of rock,” and toyed with the idea of a return visit to Stone the following winter (The South face BAKES in the sun, which every friction lover knows means that sending is restricted to a winter-only activity).  But that December I tore my rotator cuff and was out for a a couple of months…then by the time the next winter rolled around I was restricted to top-roping in a full body harness (7 months pregnant 🙂 ), and then once Cragbaby entered the scene, multi-pitch was obviously out for the short-term.  But now that C is old enough to hang out with the grands, and especially considering that Stone Mountain is on my list of areas to cover in the guidebook, this season seemed as good a time as any to dive into a sea of granite! 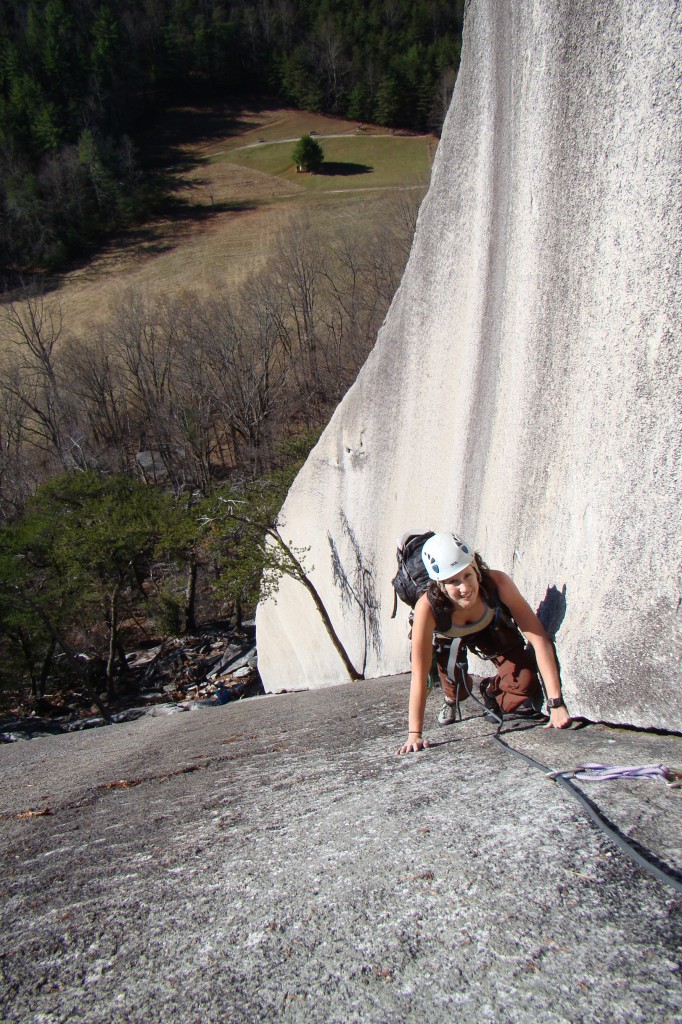 Our main goal on Saturday was to re-familiarize ourselves with the area, and to make firsthand sense of all the mounds of research I’ve been doing.  We had our sights set on The Great Arch (5.5), a three-pitch classic that follows a right-facing dihedral (and incidentally has all the gear that we could ever want).  This proud line can be seen from the field below, and gives a great vantage point for all the routes on the middle of the South Face.  The Great Arch starts from the Tree Ledge, so to get to the base of the route we climbed Block Route (5.8).  Block Route consists of an enjoyable romp up a small seam to a 5.6-ish slab for about 100 feet, to a well-protected flop onto the left side of a large overlap (crux), and then another 20 feet of easy slab.  The gear is there when you need it, and not when you don’t.

It was a good thing we’d headed out early, as there was already a party on the Arch as well as parties lining up below us with the same goal.  While we waited our turn I was able to snap some photos of the other lines along the Tree Ledge.  The climbing on the Arch most certainly lived up to its classic status – 300 feet of perfect liebacking, starting at hands size, and trickling slowly down to a thin seam.  Great gear throughout, with a very friendly angle for which to place it.  We summitted just before noon and ate lunch amidst groups of hikers in a surreal lunar-like landscape, then hiked back down to the parking lot. 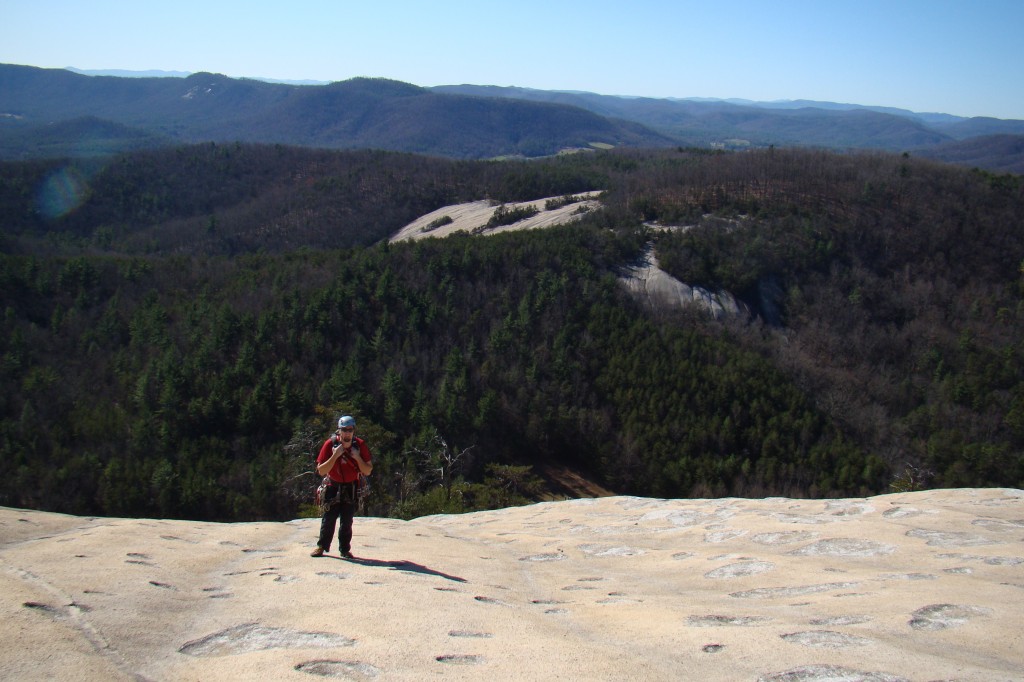 On the way down we realized that we had time for one more route.  After discussing our options, we decided on Scimitar (5.12a), since it would give us a nice chance to get our bearings on the extreme left side of the South Face and snap some more photos.  It also seemed fitting to couple our morning on one of the easiest routes at Stone with an afternoon on one of the hardest…and it didn’t hurt that Scimitar boasted 9 bolts for 120 ft (unheard of for Stone Mountain standards, and if you’re wondering – yes, it was rap-bolted) and was also rumored to be soft for the grade. 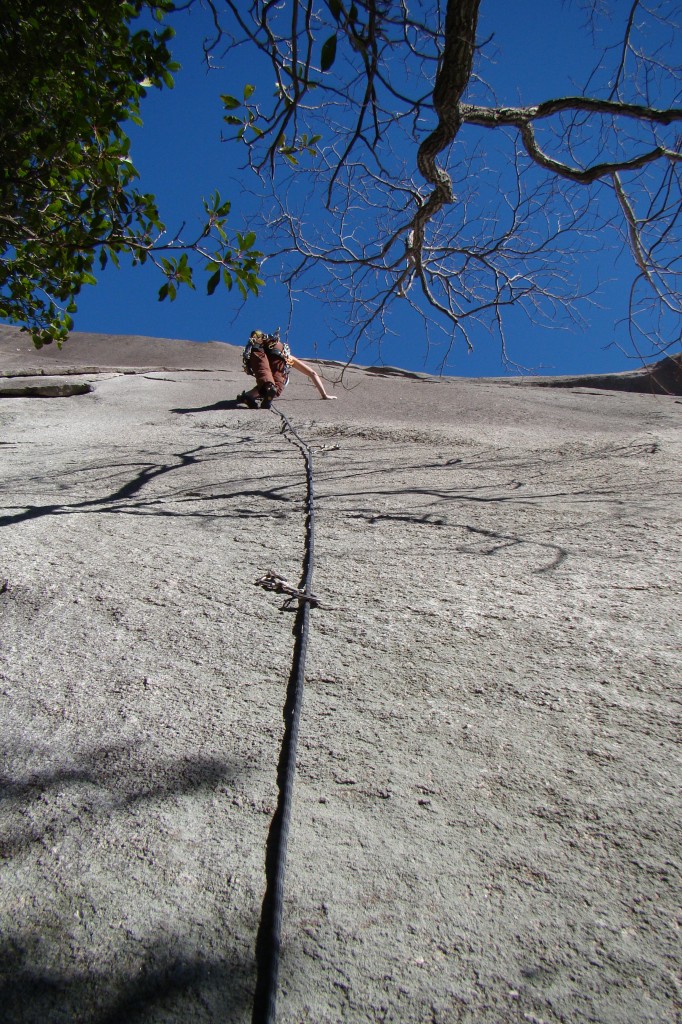 More than a little imposing from the ground, this line ascended a sustained, steep, and chalkless slab that started out thin and technical and quickly turned to hard, friction climbing some time after the 3rd bolt.  I ended up bailing from an archaic looking quicklink on the 6th bolt. We’d had such a successful day, and I didn’t have it in me to go for it when my feet were already several feet above my last bolt and I was looking at at least another body length of rock devoid of holds to reach the next one.  Somehow cheese-grating myself down 20 feet of slab didn’t seem as enticing as calling it a day and heading home to my Cragbaby!  I’m glad I tried it though, as it was a superb lesson in footwork.  Highlights for me included slipping at one point, then realizing (after sliding a few feet down the slab) that my body position had somehow managed to catch me without weighting the the rope, as well as snagging some booty gear off the 2nd bolt.

This excursion was the perfect way to work off some post-Thanksgiving gluttony.  It was the first time that the hubby and I were able to climb just the two of us since before Cragbaby was born!  It was really fun to be able to sneak away over the holiday and log some multi-pitch miles together.  It felt good to finally get back to Stone, and also to somewhat get my bearings at the area I feel least prepared to cover guidebook-wise.  And in addition to a whole slew of new moderate lines for us to play on, I even walked away with a new winter project to hit another time when I show up with my try-hard pants on!  What adventures did YOUR family get into over the Thanksgiving holiday?

13 Responses to “A Slab-tastic Thanksgiving at Stone Mountain”