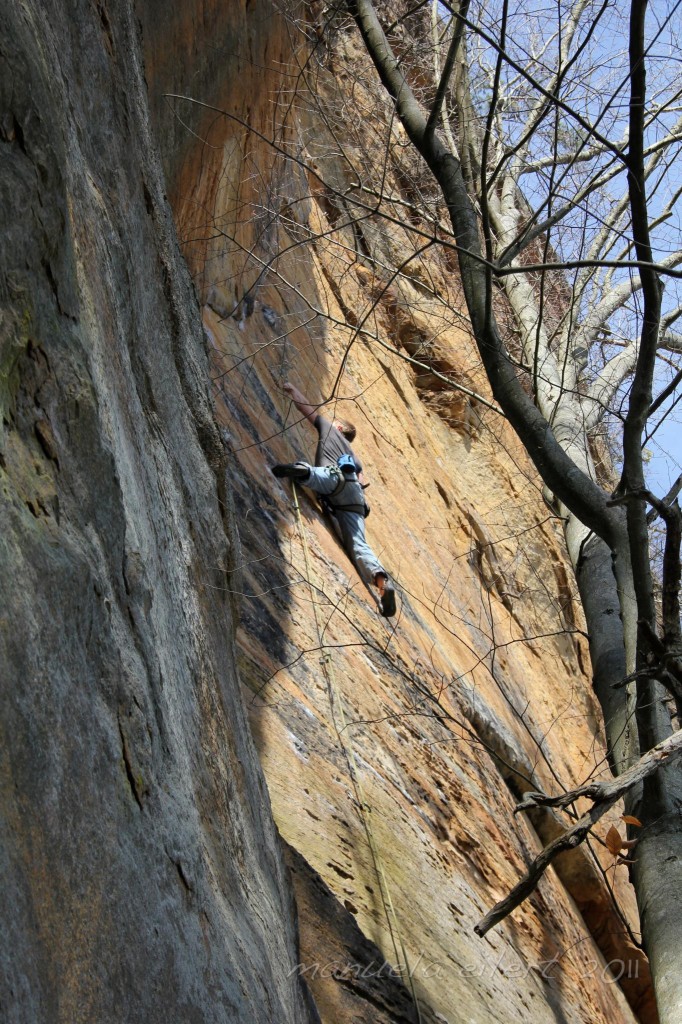 Caleb high on the face

While every climbing trip we take involves fun and uniqeness, not every trip contains a moment like this one.  It’s 5 days later as I write this and my heart still skips a beat when I think about this line.  When I first sat down to write up my trip report from last week’s trip to the Red, I knew Dave the Dude deserved way more love than a brief mention in a weekend recap, so I decided to memorialize it as a Classic Climb.

Just like the old adage that says you can’t judge a book by its cover, you can’t always tell how good a route is at first glance.  Sometimes a simple, uninteresting face can provide exceptional movement and position, whereas other times the most aesthetic lines don’t climb near as good as they look.  Dave the Dude however, is one of those special lines that not only lives up to, but far surpasses its first impression.  No matter what type of climber you are, or what type of style you prefer, you can’t walk by this route without taking notice.  Its the kind of line that almost seems to shout, “Climb me!”

The varied movements on this route make it almost seem out of place amongst its neighboring lines at Eastern Sky Bridge.  The clean face that for the most part remains devoid of obvious pockets and huecos is more reminiscent of a long technical Endless Wall line at the New River Gorge than a typical route you’d find at the Red.  Upon closer inspection you’ll notice this line has a diverse combination of styles, somewhat sustained, complete with a devilish crux sequence and an exciting, powerful finish. 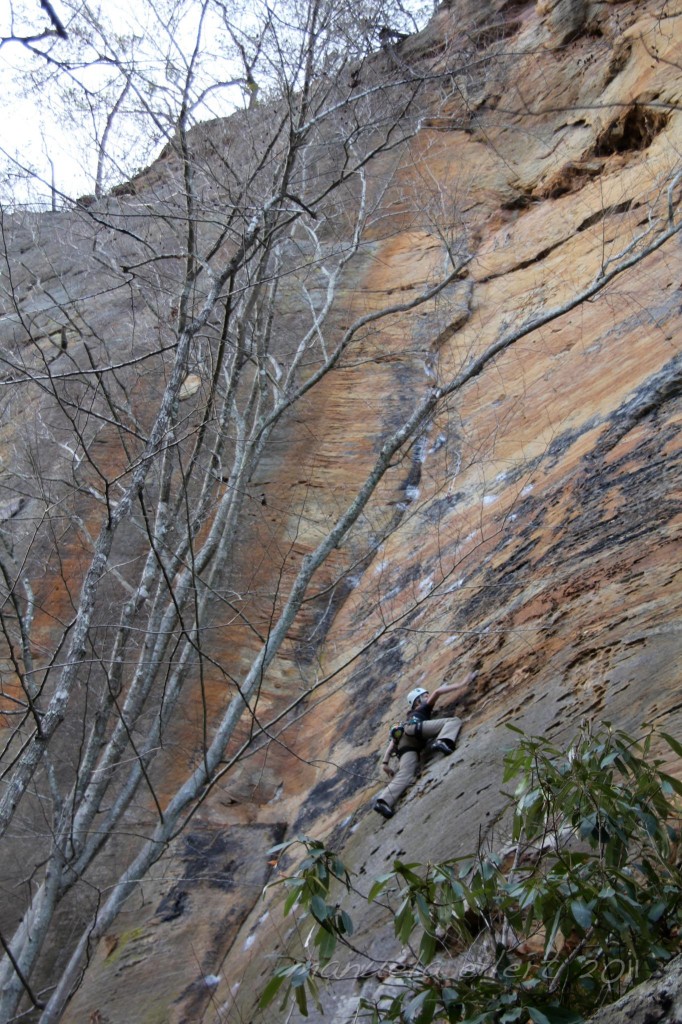 It was hard to get clear shots b/c of the trees, but the line ascends the face, then heads left and up into the flake system

The route can basically be divided into three segments – finger crack, crimpy face, then a burly layback section which is preceded directly by a mono crux.  After hearing the nasty play by play of what the boys had been doing at the crux, I decided to toprope it rather than lead it first.  Sure enough, I had a lot of trouble with the tall guy beta – a right hand mono pocket and a wicked step through to a hard left hand gaston to gain the flake that looked pretty shoulder-intensive.  However, during one of my many flailings, I discovered another hold that was ironically an exact mirror image to the mono pocket they’d been using.  It was a little harder to get to, but once I had it I was a lot closer to where I needed to go. With the left hand mono and a tiny but positive crimper for my right, I was able to move up first try into the flake completely static and in a good body position to set me up for the layback piece.  The layback section was hard but fun and I felt pretty confident about it.

I lowered and had intended to head to another route (since virtually everything at Eastern Sky Bridge gets at least 3 stars…) but started toying with the idea of leading it after hearing how much everyone else had thrashed and flailed during their first attempt.  I realized that there was only enough daylight for one more route, Bennett scrambled up on top of a ledge and announced that he had a good angle for video, and the rest of our posse joined us after finishing up somewhere else and proceeded to not-so-subtly encourage me to go for it.  It seemed as though the situation was quickly turning into my chance for either an epic send or an epic fail… 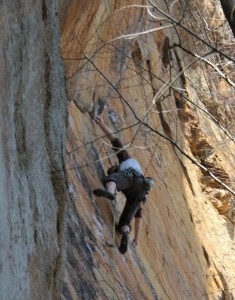 As we all know, a little peer pressure never hurt anybody (well, I guess that might not be entirely true, but in this situation it was a good thing…), so I decided to put on my big girl panties and lead it.  Looking back, I’m not sure why it was so intimidating – the bolts were pretty far apart in the lower sections, but the climbing was straightforward and I’d had no trouble on it during my toprope run.  The crux occured right after clipping a bolt, so those moves were basically on a toprope, and the layback section, while committing and insecure with a lack of feet, had good clipping stances and reasonably clean falls.  Nevertheless, in the back of my mind I was afraid I wouldn’t be able to finish it, and we’d have to deal with all sorts of shenanigans to get our gear back in the dark. 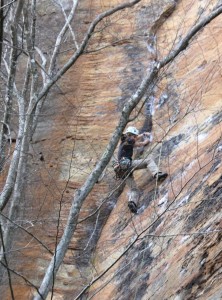 Just for background, my only prior 5.11d send had been at Hidden Wall in North Carolina – a route called Toxic Shock that had a nasty crux right off the deck, but then provided a no hands rest and 5.9 terrain the rest of the way – 11d yes, but Dave the Dude was obviously much more legitimate (and far more classic).  I was able to make quick work of the crack and face climbing sequences, and before I knew it I was at the crux…and starting to panic because I couldn’t figure out where to put my right foot.  There were only two options for my hands, so I knew those were right, but when I put my left foot up, it felt too far away to rock onto, which meant my right foot wasn’t right.  My fingers were screaming at me and I knew I didn’t have much time to figure it out –  I lost my focus for a second as I thought about how lame it would be to botch my redpoint over a lapse in memory.

Finally I retraced my steps a bit and realized my right foot needed to be where my left had been.  As soon as I did that, it felt right and I pulled up on the mono and bumped into the good part of the flake.  From this point the feet disappear except for a key pocket for the right toe, so its all about using  body tension to stay on.  With the crux down,  I took a minute to shake out and remind myself to keep my core tight before starting up the flake – and then promptly felt myself barn-door when I started moving again…thankfully my hand holds were good enough to keep me on.  Once I got my right toe in the pocket, I knew the send was mine for the taking, and powered up the rest of the flake.  When I lowered I could tell that I was sporting a goofy perma-grin, but there wasn’t a thing I could do about it – nor did I care! 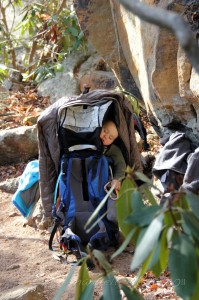 Sending Dave the Dude was definitely an unexpected surprise, and a great climax to a fantastic trip.  I normally don’t like to project routes when we are in new areas and/or areas that I don’t get a chance to climb at very often.  My m.o usually consists of hopping on as many classic routes as I can, regardless of grade so that I can get a full-value experience out of a particular area.  That means that for the most part I generally stick with routes I have a good chance of onsighting so as not to beat myself to a pulp on any one line.  That being said, I hadn’t been expecting to send anything hard, so to tick off a solid 5.11d on my second go was definitely pretty exciting for me! 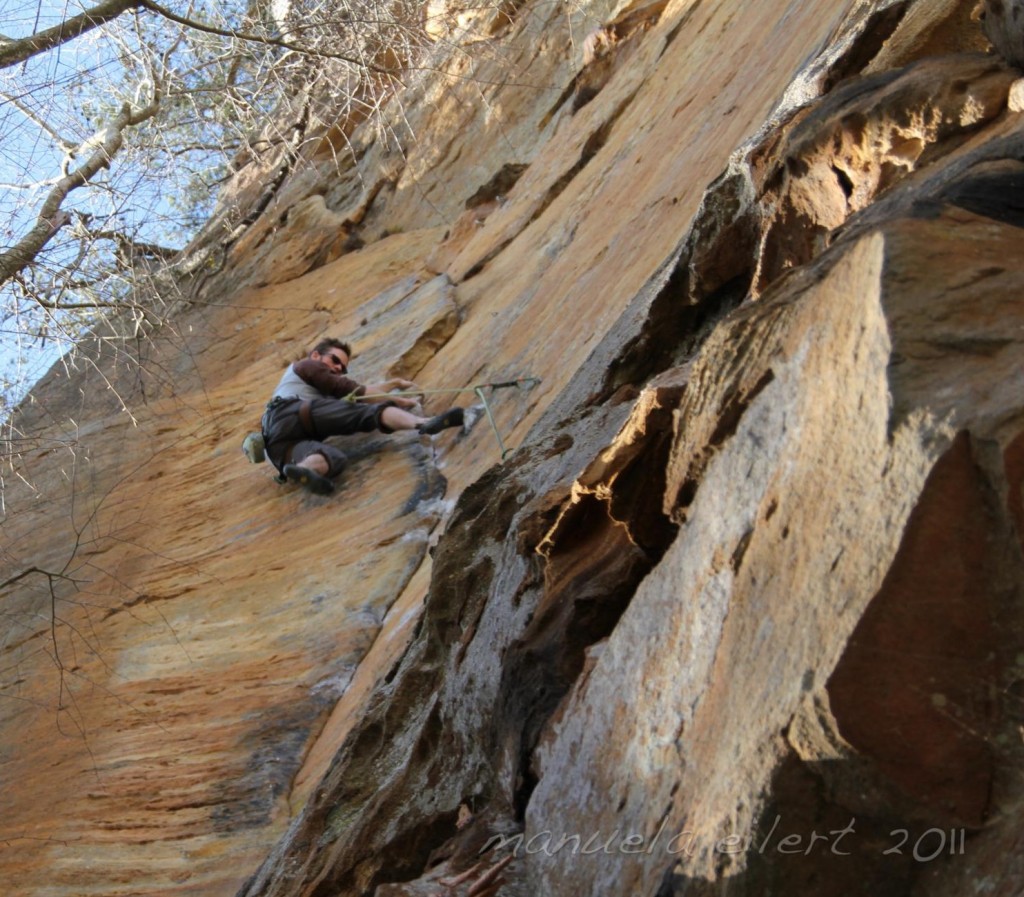 Bennett getting his layback on

So for anyone out there that is headed to the Red in the near future – make sure to hop on Dave the Dude if you find yourself at Eastern Sky Bridge – I promise you won’t regret it, as it was unanimously given 5 stars from everyone in our party that tied in to it.  We did manage to get some video…although admittedly I’m a bit hesitant to share it because it’s by no means an example of fine cinematography (not to mention that the angle makes it look 5.9…).  At the very least, however, it does a pretty good job showcasing the route, so if you’re interested, please pardon the occasional jumpiness and climber-out-of-frame bits and click here.  Oh yeah, and big props to Bennett who had the idea to scramble up on the ledge to film right after his own send of Dave the Dude…