It’s been a while since I’ve done a Name that Caption post.  And, if you’re interested, April M. was the winner of the last one: “A Slightly Awkward Picture with a Pumpkin.”  (April, contact me and I’ll hook you up with a Cragmama sticker if you’d like!)  Anyway, today’s photo was actually taken this past May, while Cragbaby was snoozing at the  crag during the New River Rendezvous. 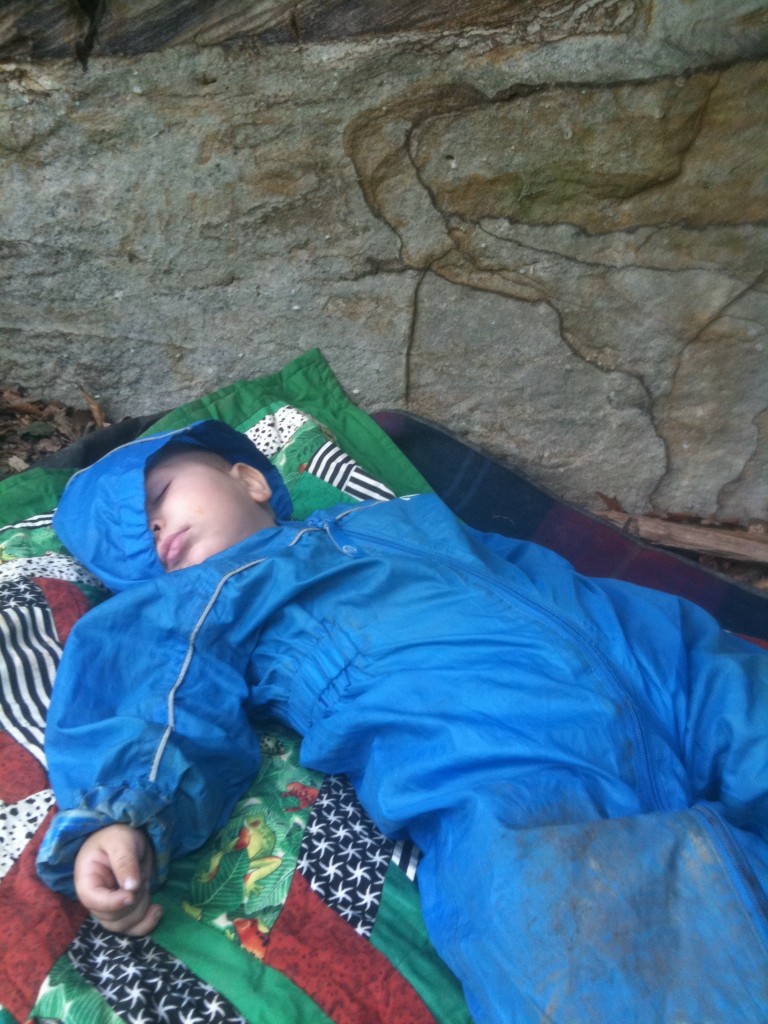 I like this picture because I feel like it captures my little guy’s free spirit.  Play hard, sleep hard – you could call it his motto even.  He’s never been one to pay much attention to what time the clock says.  He soaks as much fun out of his day as he can, and then he drops – no matter when or where it happens.  I love that in this shot he still had his adventure suit on (and I also love how filthy it is!).  He was so exhausted he fell asleep right in my arms before I got a chance to de-adventurize him into something a little more comfy.  I remember being amazed that he crashed in the middle of all the action, surrounded with the sounds of gear clinking, climbers shouting up commands, and barking dogs.  Ironically enough, despite all of the hullabaloo that was going on outside the range of the camera lens, he was perfectly peaceful, happily exhausted from a day filled with exploring, scrambling, laughing, and living.

So what do you think?  Give my sweet little snoozer a caption!

(SIDE NOTE – For those of you that remember the talk show/podcast segment I was supposed to do with Mamavation TV back in September that got cancelled due to a technical glitch, tonight at 10 pm EST is the rescheduled night!  I’ll be on there live – yikes! – talking about camping with kids.  If you’re interested check out this previous post that explains how to log in so you can catch the segment. 🙂 ).