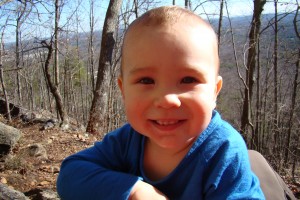 I know I said I’d be taking a break from blogging until after the New Year…but our climbing trip yesterday was particularly noteworthy…This past week marked the end of our self-imposed 4-week climbing hiatus…we celebrated by promptly getting spanked at the rock gym on both Tuesday and Thursday.  On Friday, however, it was a different story and we had a different reason to celebrate – my first 5.12a send!  To be honest, my expectations hadn’t been very high – after 2 days of solid rain, we weren’t even convinced anything would be dry enough to climb.  But the morning dawned bright and sunny, and freakishly warm for December.  In fact, by the time we got there (we got off to a late start since Cragbaby had for once gotten the memo about sleeping in!), conditions were perfect – everything was dry, all traces of humidity were gone, and a consistent breeze kept temps just right.

We spent the day at Red Wall, where we all took a run up The Gimp, a tall for the wall 5.10c/d with a tricky traverse up high.  We were all feeling pretty good, so we opted to get down to business right way – on TKO (5.12a).  My friend Bennett has been after me to no end to try this route, certain that it would go down pretty quickly for me.  After bailing before even getting to the crux on my first go, I was less than convinced, and more than a little discouraged.  Bennett graciously hung the rope for me so that I could work the moves on toprope, and after getting through the first long reach right away, I tackled the heinously sharp, credit card crimpy crux.  The crux is only a few moves, but the holds are heinous and the sequence is ridiculously beta intensive.  It took me several thrashings to figure out exactly how I needed to position my feet to make one particular move stick with any sort of regularity without barn-dooring at the credit card crimp.  I finally found some beta that seemed to work for me, so I lowered off and after a short rest pulled the rope and took another burn on lead. 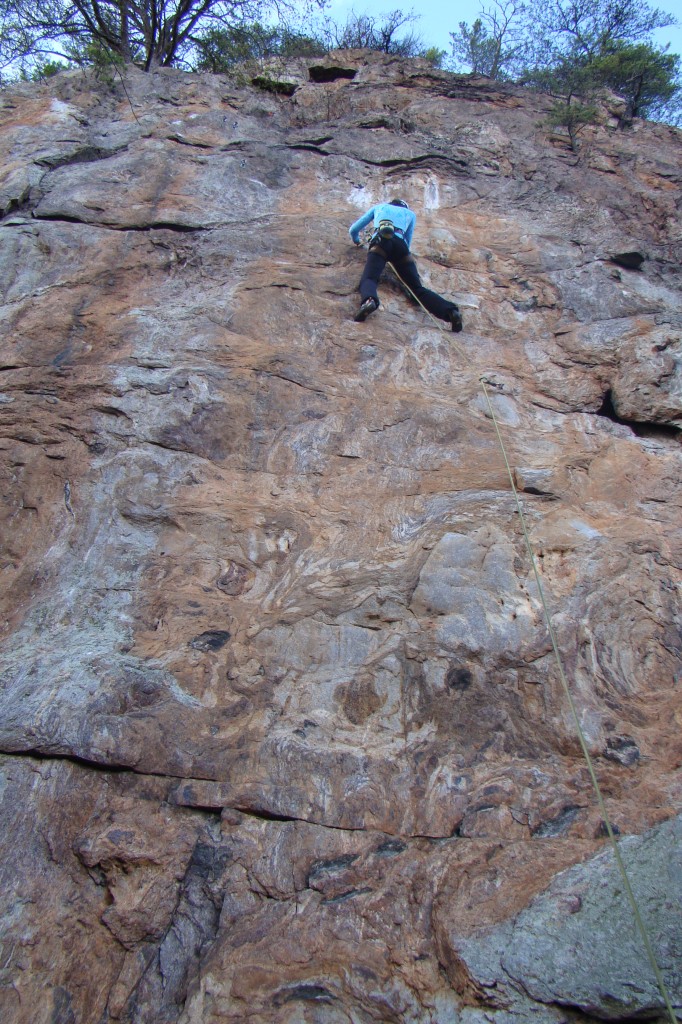 TKO! Just before the crux...

This time I had only the slightest hesitation committing to a reachy move down low (the same move that had shut me down on my first lead attempt), but pulled through that move as well as the whole crux pretty smoothly.  I only had one more significant move left – a powerful lunge to a giant undercling flake… and I came up short and fell.  I think I was a little too adrenalized, and rushed the move without finding the sweet spot on the small rail my hands were on.  It was pretty frustrating to get that close and lose it post-crux, but everybody was pretty adamant that I should give it another go.  I wasn’t sure I had it in me to get to the top again, let alone clean, but after downing some pre-Christmas goodies and having some good snuggle time with C, I decided to put on my try-hard pants and give it one more go.  I knew that it would be easier with the sequence fresh in my mind, even if physically I wasn’t feeling daisy fresh…

And I guess 4th time’s a charm!  I got through the crux without a hitch, and this time I took my time getting setting up for the last move.  When I stuck the undercling flake, all I heard was an awkward silence…apparently my crew didn’t want to make any assumptions this time.  After clipping the chains however, wild hooting and hollering commenced from the base of the cliff, which was quite alarming for poor C until he saw an all smiles Mommy being lowered down towards him.

We celebrated with the usual revelry at one of our favorite post-climbing eateries.  What started out as a rather unlikely day for sending of any sort had turned into my hardest redpoint to date.  I arrived home exhausted, happy and satisfied, excited about wrapping up one of my 2011 goals as an early Christmas present, as well as the upcoming opportunity to spend some relaxing time with family over the next few days.  Merry Christmas everyone!