I have a very fond childhood memory of a Nativity set that belonged to my dad’s Aunt.  Every year we would spend Christmas Eve at her house, and every year I would engross myself in the little white figurines on the hearth, while I waited (sometimes not so patiently) for it to be time to open presents.  The Nativity characters were white and made out of porcelain, and had a magnificent blue velvet lining upon which they were placed.  And although they were extremely breakable and possessed a lot of sentimental value, I don’t recall ever even coming close to dropping any of them – it probably didn’t hurt that my mom was always nearby, ready to invoke her go-go-gadget arm skills at the slightest hint of imbalance on my part.

Anyway, reenacting the Christmas Story with those Nativity figurines was one of my favorite parts of the holidays.  Fast forward to April of 2007 when my family was blessed with the opportunity to go on a once in a lifetime trip to the Holy Land.  I could go on and on about how amazing it was to watch thousands of years of history literally come to life as we explored ancient ruins and walked the same paths that Biblical characters journeyed on.  But in addition to returning with a host of unforgettable memories and photographs, I also managed to come home with what I’d hoped would turn into a family tradition – a hand-carved Nativity set made entirely out of olive wood that I found in Bethlehem! 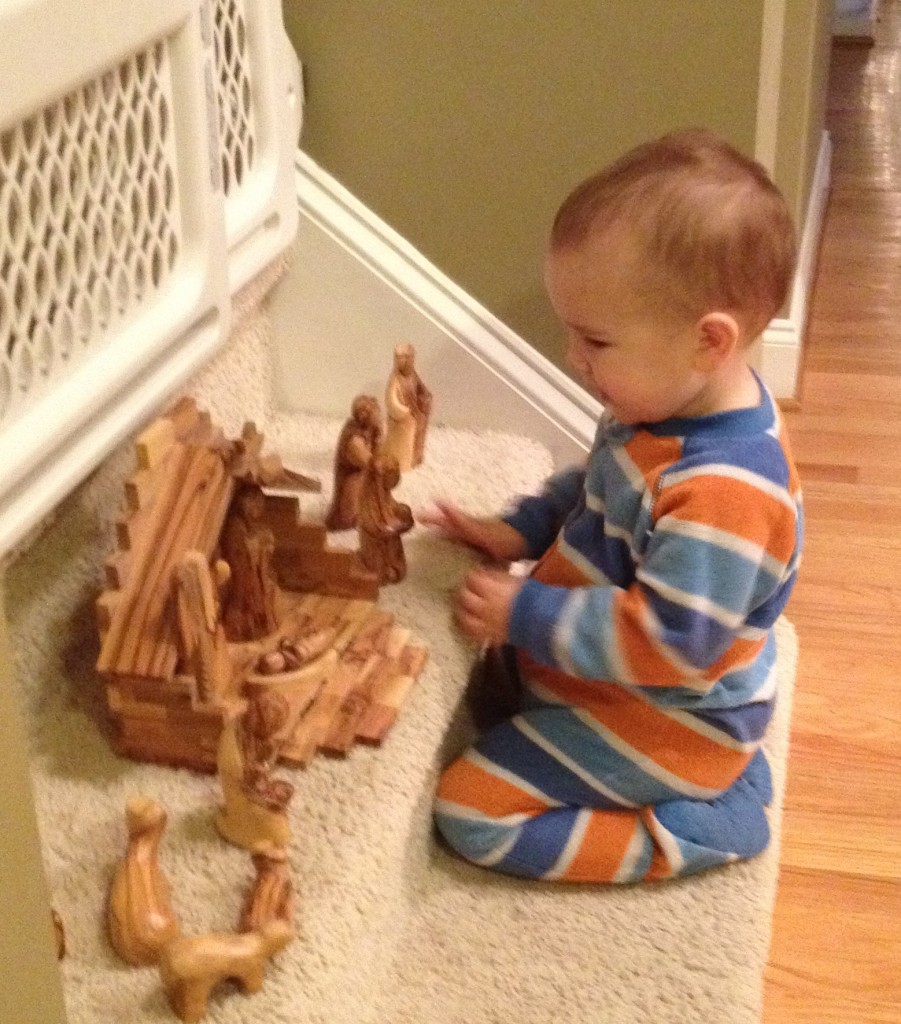 Every year since then I’ve put that wooden Nativity set out on display, even sometimes when it was our only Christmas decoration.  And every time, I would think of that white porcelain set that I loved, and would wonder if maybe one day my little boy or little girl would love this wooden set just as much.  Last year was Cragbaby’s first Christmas, but he had just turned 9 months old, and was definitely more into all of the twinkling lights and wrapping paper than anything else.  This year however, is a different story.  As a curious and big-hearted toddler, C is soaking up every minute of the holiday season this year – and with the one-finger rule in effect on the Christmas tree, the unbreakable Nativity set has seen quite a lot of action! Several times a day C makes his way over to it, and we spread all the characters out (wise men over here, shepherds over there…) and act out the story together.  C’s favorite character is the angel, and he has a lot of fun doing fly-bys over the sheep (who knew that angels could make helicopter sounds?!?).  He also really likes presenting the wise men with their gifts to Baby Jesus (aka “Jee-Jee”), and lovingly holds them up to the manger while making the same noise he does when he gives a hug (“mmmmmmmm”).

I know it sounds sappy, (its the holidays, so I’m allowed), but sitting there with my baby boy in my lap, watching him savor the real message of Christmas, sends a flood of warmth to my heart that there are no words for.  And I guess that’s the embodiment of what family traditions are meant to be – intimate moments shared with the people you love the most.  It’s one of the many things that makes me realize just how blessed my family is this holiday season.  But I’m sure our family isn’t the only one out there with a ton of traditions and blessings to be thankful for – now its your turn.  What memories does your family most look forward to making over the holidays?

11 Responses to “A Nativity Story”