Although my attempts to work on route descriptions at Stone Mountain were waylaid by the storm front that moved in on Thursday night, my day spent at Pilot Mountain on Thursday was well worth the drive on a variety of levels!  Originally Bill Webster (aka guidebook publisher) asked me to join in on a meeting he had lined up with the park staff to talk about access.  He figured some of the information discussed would be prudent to the guide, and also said we could work together on double-checking my descriptions and taking pictures when the meeting was finished. 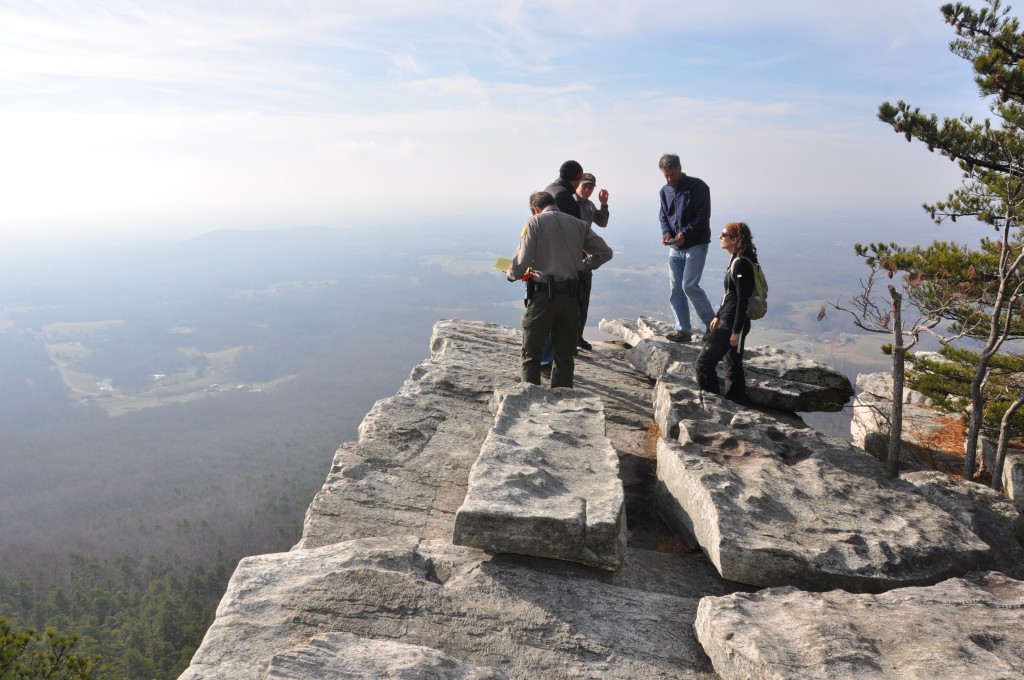 Surveying the cliff top with the park staff

I’ve never been much for politics, whether it be on a global or local scale, but I do know that since the dawn of our sport, climbers and park officials have not always been the best of friends.  Sometimes it stems from disagreements about choosing conservation over recreation, other times its a case of a small group ruining everything for the majority.  And sometimes I think nasty opinions are based on rumors and hearsay.

I’ve never really been involved in discussions over access issues with anyone “official,” so this was a definitely a learning experience for me.  To all those who assume that no one in the parks system gives a crap about climbers, I can say from firsthand experience that those statements are far from the truth, at least when it comes to Pilot Mountain anyway.  The three individuals that we met with were not only interested in enhancing climbing access throughout the park, but were willing to take the time to listen to us climbers voice our opinions on the best ways to go about it.  After discussing everything from replacing old bolts/anchors to minimizing impact at the cliff, we left the office together and hiked the entire cliff, top and bottom, so that both sides could point out specific concerns and brainstorm about solutions.

Throughout the day it became very clear to me that though we were approaching the situation from different angles, we were all on the same team, with a common goal of making the park an enjoyable experience for everyone.  It was fun talking to the rangers, and I was impressed both by their knowledge as well as their passion for the flora and fauna within the park.  We climbers learned the difference between a Pitch Pine and a Table Mountain Pine, and the rangers got an earful of stories from the vertical realm of the state parks system.

I came in to the meeting initially not knowing what to expect, but left the meeting with a renewed outlook on the ability of climbers and park staff to not only get along, but to be able to work alongside one another towards a common goal.  That would have been a worthwhile day in itself, but what made the day most profitable was taking a second lap around the cliff with Bill to confirm all of my route descriptions, bolt counts, and area directions.  For those that follow the Carolina Rocks facebook group, be on the lookout for a few specific questions regarding some of the more obscure Pilot routes.

It feels good to be making progress even though I know I’ve got a long way to go.  Although at times it almost seemed sinful to be out at the crag on such an unseasonably warm and beautiful day without putting a harness on, it worked out well that this work day coincided with my self-imposed rest period.  Speaking of climbing breaks, we are counting down the days until the climbing drought is over…the only thing keeping us sane has been trip planning for the spring!

Oh yeah, and one last thing – I’ll also be taking a blogging break the week after Christmas so that I can have more time to spend with family, but I’ll be kicking off the first week of the New Year with “Highlight Week,” so stay tuned for the best of the best of 2011!