Some of you may recall the name Icebreaker  from my Holiday Gift Guide post last week, where I recommended them as our family’s favorite go-to brand when it came to baselayers.  However, that hasn’t always been the case…read on to find out why I recently turned from my Polypro ways and became a Wool-Wearing-Fanatic almost overnight!  (And don’t forget to enter my giveaway for a chance to score some new Icebreaker threads for the little crag-baby on your Christmas list!)

Its no secret that merino wool reigns supreme when it comes to baselayers.  It has the unique ability to wick moisture away from the skin and remain snuggly soft, all while offering a breathable experience tailored to what the wearer needs – warmth in the cold, and keeping cool in the heat!  If I didn’t already know that it came from one of the oldest, most toughest breeds of sheep, I may very well have assumed that Merino was the love child of cotton and polypropylene – offering the best of both worlds without any of the downsides.  Well, except for one…it’s so darn expensive!  Sure, our family had a couple of merino beanies here and there, and Cragbaby actually had a pair of wool long john’s he’d scored for free at some point, but by and large our technical apparel consisted of mostly quick-drying synthetics that we would layer over ourselves until we looked like the marshmallow man on Ghostbusters! 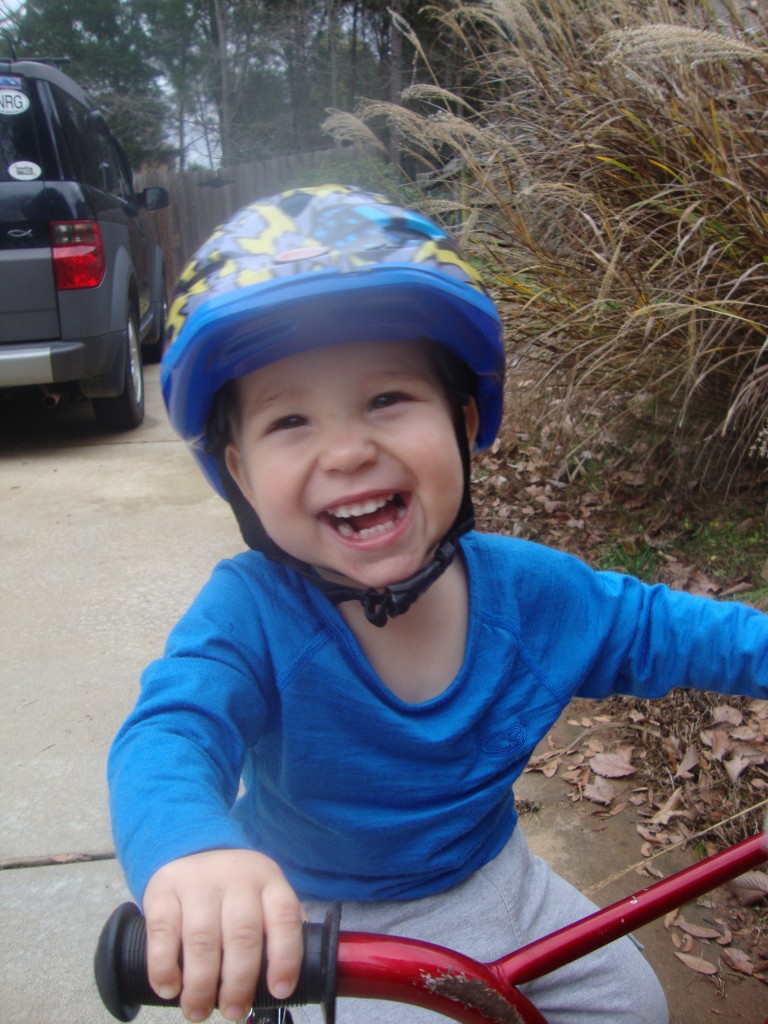 So when I was approached by Icebreaker a few weeks ago about whether or not Cragbaby and I would be interested in testing some of their threads for review, it was kind of a no-brainer for me.  They didn’t need to sing the praises of Merino Wool for me since I already knew the product was top of the line.  I went into the process knowing that odds were more than good we’d both be satisfied with the products.  But I also went in thinking that C and I were pretty lucky to score our gear for free, since I figured there would be no way I’d ever be able to justify spending that kind of money for either of us, particularly for the one that’s growing like a weed!  But little did I know that I would be blown away by Icebreaker products!  And while I still think merino is expensive, the quality is so much better that I can now see the advantage of switching over, even if it means waiting til Christmas or birthdays, and even if it means only having one or two items (which  is easier to get by with than you’d think, since merino doesn’t hold onto stinkiness the way synthetics do!)

We received three items – a Kid’s Oasis Crewe and a Flexi-Chute for Cragbaby, and the Women’s Quantum Hood for me.  My first reaction was how soft everything was!  In the past I’ve found that I can’t wear wool up against my skin for long periods of time without getting a horrible case of the itchies – but not so with Icebreaker merino!  We both felt cozy and snuggly all day long!  My second reaction was how lightweight everything was!  C’s Oasis Crewe slid over his head and seemed to just hover over his body, and my hoodie consisted of only one thin, stretchy layer.

We officially put our new threads to the test on a trip to our local bouldering area just before Thanksgiving.  Temps were in the low 30’s when we arrived early morning, and although it eventually warmed up a bit, the sun remained hidden in the clouds the majority of the day – meaning it was a great day to whip out the wool! 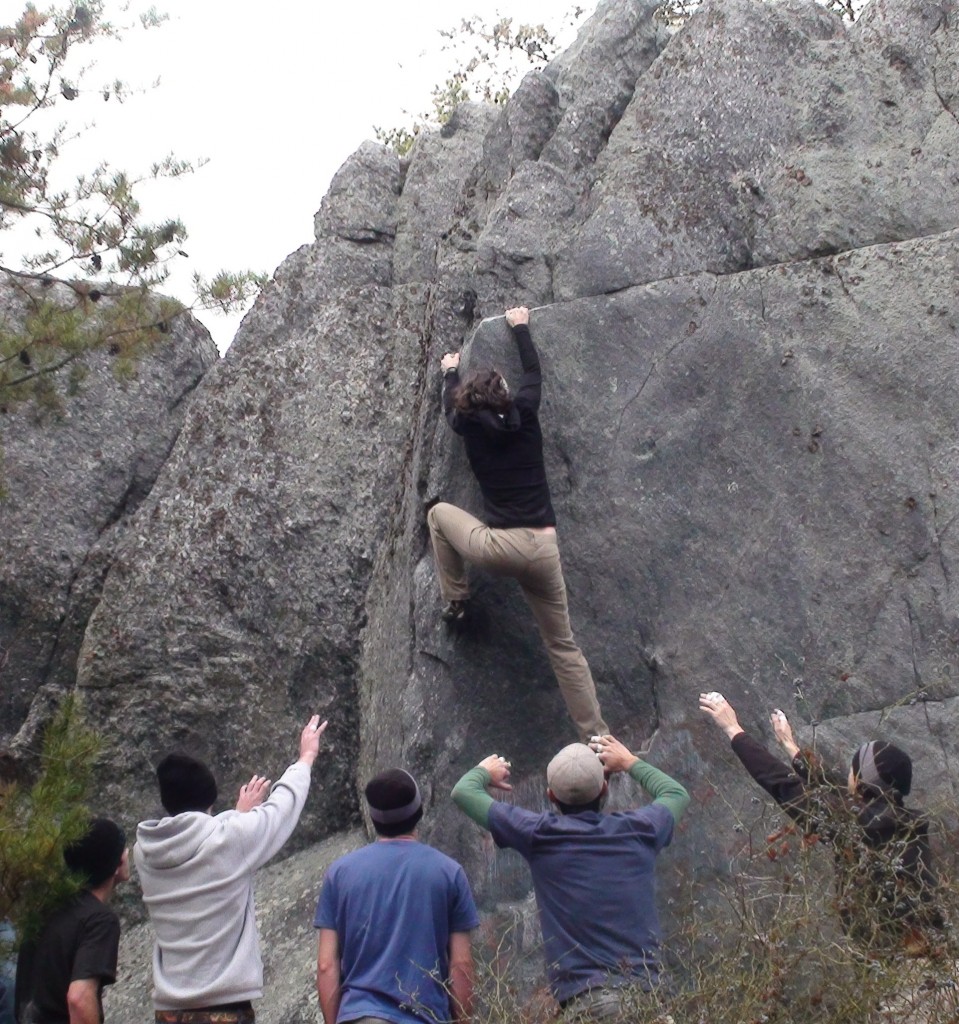 The Quantum Hoodie in action

Cragbaby may not be able to find the words to tell me exactly how he feels about his Oasis Crewe just yet, but I think its safe to say from the smiles  and giggles throughout the day that he was anything but uncomfortable!  It also made me feel good to touch warm, soft, dry skin every time I had to strip him down to change his diaper (although I’m not sure he would say the same about my icy fingers!)  Since that day at Dixon, C has worn his Oasis Crewe numerous times, under his down suit on cold mornings at the playground, or just by itself as a long-sleeved t-shirt on bright, sunny afternoons.

The Flexi-Chute is a nifty little contraption – its basically a tube of fabric that can be used any number of ways to bring warmth to the head and neck.  To me its reminiscent of the neck gaiters I used to wear growing up whenever I would play in the snow.  However, the ones I had were made of bulky fleece and would get sopping wet after being over my mouth for any length of time.  Cragbaby’s however, is of course made of merino, so its only a thin layer of fabric over his neck/mouth.  This means that the sweat/saliva evaporates pretty much as soon as it is absorbed into the fabric, which seems to avoid that nasty, wet feeling.  We also found that the Flexi-Chute also doubled well as a headband/hat apparatus, similar to the multi-functional headwear made by Buff.

But what surpassed all expectations however was my unassuming, lightweight hoodie…I took my down jacket off when I first started climbing, and by the end of the day I realized that I had been perfectly comfortable all day long in just the hoodie, rather than scurrying down the back of the boulder and immediately throwing on the puffy jacket in between climbs, as per the usual.  I was shocked that something so lightweight was actually able to keep me warm!  The Quantum hoodie seems almost like it was made with climbing in mind – it fits like a glove, and is thin enough to wear comfortably underneath a harness.  The thumb hole sleeves provide added warmth while still allowing the finger dexterity to belay, rummage around in my pack, or even take photos while my partners are climbing.  The Quantum hoodie now has a permanent place on a hook right beside the door to our garage, so that I its easy access whenever Cragbaby and I feel the urge to play outside.  However, there is one complaint that keeps the Quantum from being labeled as perfect – no good pockets.  I say no “good” pockets, because technically there is a small pocket on the upper left side of the chest, which would work out perfect for an iPod during a trail run, but not so much for carrying my keys, stashing the rest of Cragbaby’s snack, or simply just sliding my hands in to keep warm.  While annoying, this lack of a good pocket is by no means a dealbreaker, since the other pluses far outweigh the one negative.  And even though I received all products for free to facilitate this post, everything I have said about this company and their products is my uninfluenced and un-biased opinion.

So now that everybody’s psyched on Icebreaker merino, here’s a chance for one lucky reader to score a sweet kid’s baselayer set for their little woolly worm!  There are three ways to enter (and you can do all three to gain three entries and increase your odds of winning!)
1.  Leave a comment on this post – Does your family wear wool?  Any other Icebreaker fans out there?
2.  Facebook Love for Icebreaker – give them a “like” on Facebook , then tell me that you liked them.  As a bonus, if you sign up for there email offers through facebook, you’ll receive 20% off your first order!
3.  Facebook Love for Yours Truly – share the love with Cragmama too!  Give my page a like and you’ll get another entry as well!

A winner will be randomly selected on Tuesday night (December 13th) at 10:00 EST, and will be contacted via email, and announced on the following day’s post.  Best of luck!