One of the perks of having local rock is the ability to get out mid-week, so whenever any of my climbing partners can arrange to get out on a weekday, Cragbaby and I try our best to join in on the party.  I was pretty psyched to be able to get out two days in a row last week, especially since by the time the weekend rolled around the unseasonably warm fair weather had turned frigid and rainy.  We spent our first day at Hidden Wall, and our second at Crowder’s Main Wall.  Oh…and sorry for the lack of pictures, I promise I’ll try better next time!

Hidden Wall –
Since I was still nursing a swollen ankle that was a lovely shade of purple from my unfortunate bouldering incident a few days prior, my only objective on the day was to enjoy a beautiful, clear day in the great outdoors.  My sympathetic climbing partners dropped Cragbaby and I off at the road so that I could shave a mile off of the approach, which was much appreciated since I felt pretty delicate about uneven terrain.  While my ankle didn’t seem to be affected in the least by the movements of actual climbing, I wasn’t really up for a long hike with a 45 pound pack, and I certainly wasn’t psyched about slamming my feet into the wall in the event of a hard whipper – so I played the role of top-rope junkie all day.  I also got a chance to nab a few cliffline pics for the guidebook.  After warming up on the link up of least resistance on the right side of the wall (Path to Extinction, 5.10a), we spent the majority of the day taking turns on Slabster’s Lament.  I got in some good work on the original line (5.12a/b), while Bennett mustered up enough technical prowess to send the direct variation (5.12c/d).  I’m looking forward to heading back there soon and tackling the original version on the sharp end. 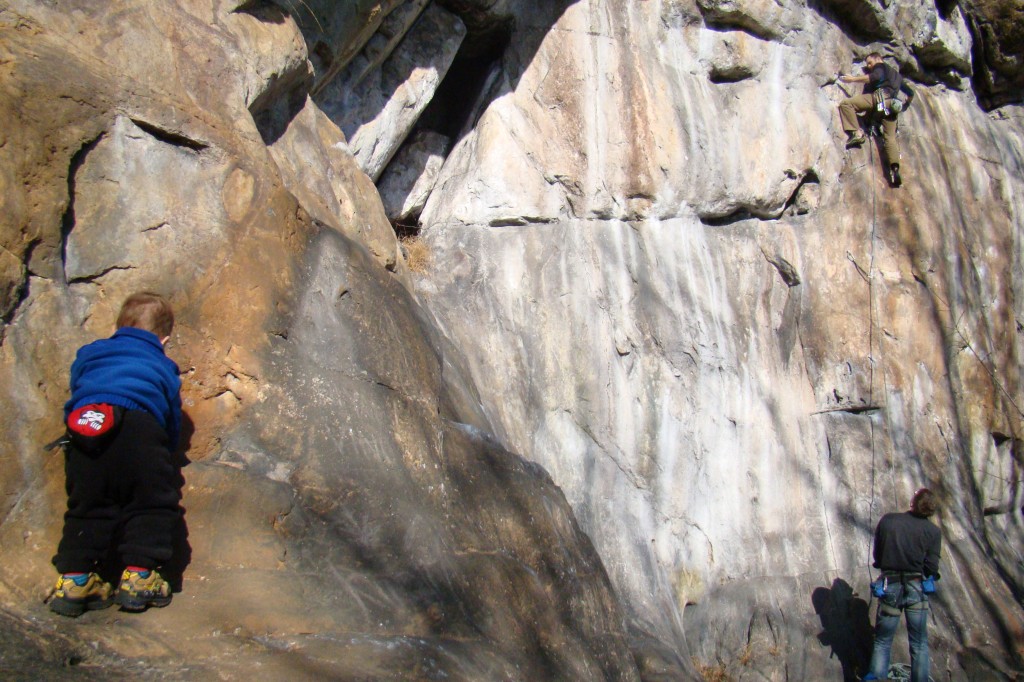 Crowder’s Main Wall –
I’d been pleasantly surprised at how well my ankle had done the day before, so the next day I strapped on my mack-daddy ankle brace and tackled the Main Wall.  C’s grandmother (aka “Bebe”) had driven up for a playdate, which meant my pack load was significantly lighter – so as long as I stayed under a forced march pace, it didn’t seem any worse for the wear.  We started our day on the New Policy Wall – New Policy (5.10c/d) and Orange Prickadilly (5.11-).  Both lines are relatively obscure for Crowder’s and giving them a test run was certainly worth our time.  Our next stop was Welcome to Crowder’s (5.12a).  When I first got on it about a week and a half ago, I thrashed my way up it – so this time I was hoping for some redemption.  Since a few of the clips can be a bit tenuous I decided the best decision for my ankle would be to work it on toprope.  After my first attempt I had a sinking feeling that “progress, not perfection” was going to be the mantra for the day.  However I surprised myself by squeaking through with no hangs or falls (on toprope) the next time around.  I rehearsed the last moves a few more times just to get them dialed in a little bit better, since I knew I would be pretty pumped by that point and wanted to make sure I didn’t blow it at the top.  I lowered off and belayed Bennett on The Flyby (5.10), anotherobscure line on the Red Wall that merges into the other undocumented route we discovered on our last visit.

By that point I was ready for my redpoint run on Welcome to Crowder’s.  I took a few deep breaths, did some dorky visualization things…and SENT!  The more I get into projecting routes, the more I’m realizing the difference it makes when I’ve got moves dialed.  There was no comparison with how smoothly it went that time versus the first attempt that day.  Even though the moves still felt really hard, I knew exactly what to do – where to put my feet and how to use each hold – so I was able to move much faster and more efficiently on the rock.

Had our day ended then I could have left the crag on a sender’s high…but we decided we had just enough light to throw a toprope on Burn Crack
(5.10c).  This steep, burly crack line definitely got the better of all of us, and in hindsight was a little ambitious for a cool-down finale after 2 days of pulling down hard.  I managed to blast all the way to one move from the top before peeling off and taking a wild, “George of the Jungle” style swing.  I decided it wasn’t worth it to try and get back on, so I figured I’d save it for a day when we break out the trad rack.

I still left the crag with a sender’s high…but also with a healthy slice of humble pie for the road.  Can’t wait for the weather to clear again!  What adventures has everyone else been getting into during these uncanny warm spells we’ve been having over the past couple of weeks?

2 Responses to “A Mid-Week Respite at Crowder’s”