I recently had the opportunity to review the latest pack from Eastern Mountain Sports – the Women’s Longtrail 60L pack.  In the interest of full disclosure, EMS provided the pack for free, but as always, everything expressed here are my honest and unbiased thoughts – in other words, my opinion can’t be bought with gear 😉  .

Anyway, this isn’t the first time I’ve reviewed a pack.  A few months ago I outlined our family’s system for schlepping gear to the crag and listed the pros and cons of the Kelty Kid Carrier that we use for toting Cragbaby to and from the cliff.  So in order to take the new pack out for a proper spin, we had to completely revamp our system.  Instead of me carrying Cragbaby/Food/Water/Diapers/Misc (clocking in around 45 pounds or so), I let my husband have that job while I hauled up ALL of the climbing gear – which probably ended up being significantly more than half of my body weight…and while I felt fine on the hike in (just under an hour of steep, scrambly, sometimes 4th class terrain), my back started screaming about halfway back to the car on the way out.

I had a sneaking suspicion that perhaps not all of the blame should be on the pack – I probably shouldn’t have upped my pack weight by such a large margin (duh).  I also probably should have taken more time to play around with the torso adjustment (I was psyched to try it out right away!).  So over the holidays I made a few changes and gave it another whirl.  While my ex-outdoor-store employee brother-in-law was in town for Christmas, I asked him to help me adjust it to the perfect fit.  I then took a couple of trips sans Cragbaby so that my climbing partner and I could divy out the climbing gear evenly, without the extra burden of a 25 pound jumping bean and all the miscellaneous other items that come along for the ride when C is with us…And I have to say that I’m so glad I gave the Longtrail the benefit of the doubt, because it performed wonderfully! 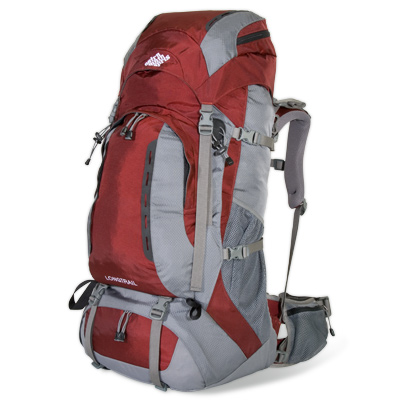 Here’s THE GOOD STUFF:
SIZE – Everything fit perfectly, with enough extra space that I could easily load and unload it, but not so much that the everything on the inside shifted and got unruly.
EASILY ADJUSTABLE – Once I figured them all out, I realized there were a million and one ways to adjust this pack so that it was the perfect for me – and all of these straps are conveniently located to use on the go as well, in case for whatever reason you need to switch pack-duty mid-hike.
ZIPPED ACCESS BOTTOM COMPARTMENT – This spot seemed to be tailor-made for my climbing rope!
LOTS ‘O POCKETS – I’m kind of a pocket junkie.  I like for everything to have its own designated spot, and this pack was loaded with pockets both on the outside and inside, perfect for keeping gear that doesn’t see a ton of action but might be called upon to spring into action at a moments notice (such as rain gear, first aid kit, spare contac lenses, climbing permits, guidebooks, etc).
COMPRESSION STRAPS – Once I had everything adjusted right, this pack did a really good job of distributing the load effectively across my hips.

THE ONLY DRAWBACK (possibly…):
DAISY CHAIN – There are two daisy chain type features on the front and top of the pack, which at first glance I thought would be perfect for attaching Cragbaby toys and the random assortment of carabiners that I never know what to do with.  However, I’m not entirely sure that the material used is the best for the job.  Other packs that I’ve seen with this same feature generally use some sort of webbing, and the loops to hook things on are formed by sewing portions of the webbing down along the pack.  This pack’s daisy chain feature had no sort of reinforcement, and the loops were small and seemed like they could tear easily.  Granted, I may be completely wrong on this, and they might last forever.  They are still in tact now and show very little signs of use as of yet – but the material just doesn’t seem tough enough to live up to every day rough and tumble use.
Even though the Longtrail and I got off to a rocky start, I’m really glad I didn’t give up on it, because I think we have a bright future together.  It’ll still be a while yet before I’ll be able to transition to the Longtrail as my main cragpack (since I like spending the majority of my cragdays with the aforementioned jumping bean, and it’ll still be a good long while before he can hike in under his own power…).  But for now I’ll just bide my time with the Kelty Kid Carrier and settle for an affair of the heart with the Longtrail (along with an occasional rendezvous here and there when I’m able to get out sans Cragbaby!)    And would I recommend this pack to someone else looking for a day-trippin’ cragpack – certainly!