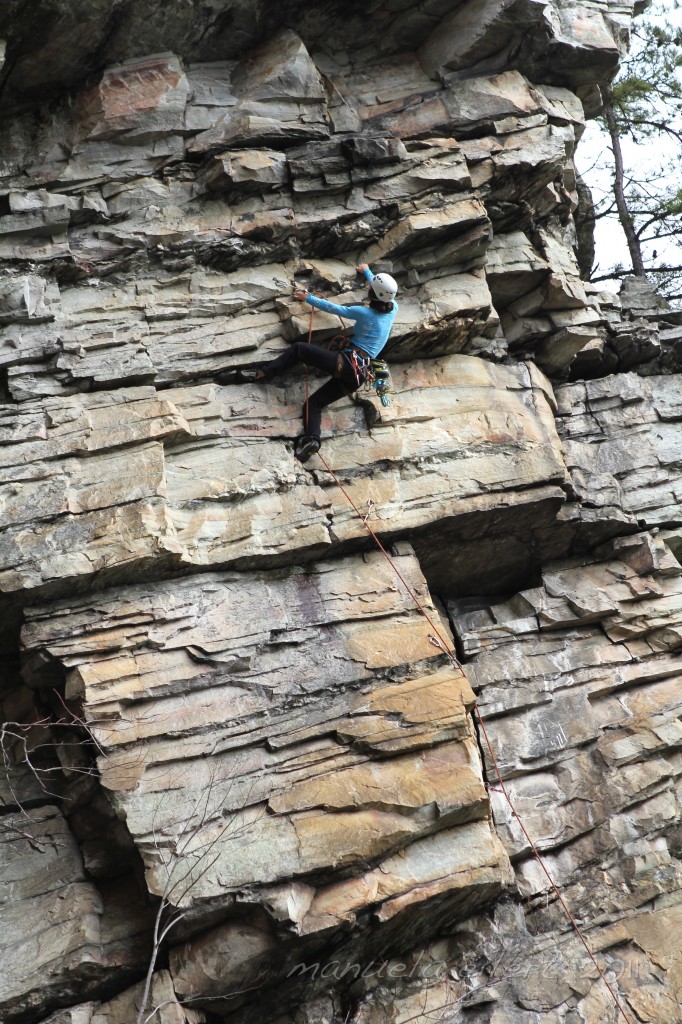 One redeeming part of our cold day at Pilot was exploring the seldom-travelled extension to "When Shrimp Learn to Whistle," even though its now chossingly obvious why everyone stops at the midway station...

In between bouts of Familial Invasions, I spent the majority of Christmas Break working on the Stone Mountain section of the guidebook – confirming topos, writing descriptions, researching previous guidebooks, and of course, squeezing in as much climbing as possible.  After a cloudy day at Pilot that never quite warmed up enough, I was relieved to drive into the parking lot at Stone the next day under a beautiful blue, sunny sky.  Publisher Bill and I got to work on photographing routes and double-checking the lay of the land for the topos on the South Face for the first couple of hours, before deciding it was time to get off the ground.

We started out with Electric Boobs (5.9+), a beautifully sculpted (and cleverly named…) line away from the crowds that was actually really well-protected for Stone Mountain standards.  A low crux with a weird bulge move paved the way to a lovely romp up the right side of the South Face.  We combined the first two pitches into one long ride, then rapped off from there.  After a few more route photos we made our way up to the Tree Ledge via Block Route (5.8), where I was delighted to find a perfect placement for the black tricam Santa had left under the tree for me a few days prior! Once at the Tree Ledge, we took turns on the sharp end – Bill tackled Rainy Day Women (5.10a), then I got my friction on on Mercury’s Lead (5.9).  Both were great lines with superb vantage points along the South Face… but with each route containing only 2 bolts for around 100 feet of sustained slabbin’, we each got a taste of some good ole Stone Mountain runout!  Once we were safely back on the ground again, we debated heading over to the North Face, but after a time check, decided our efforts would be better spent bushwhacking up the left side of the South Face to identify and photograph routes. 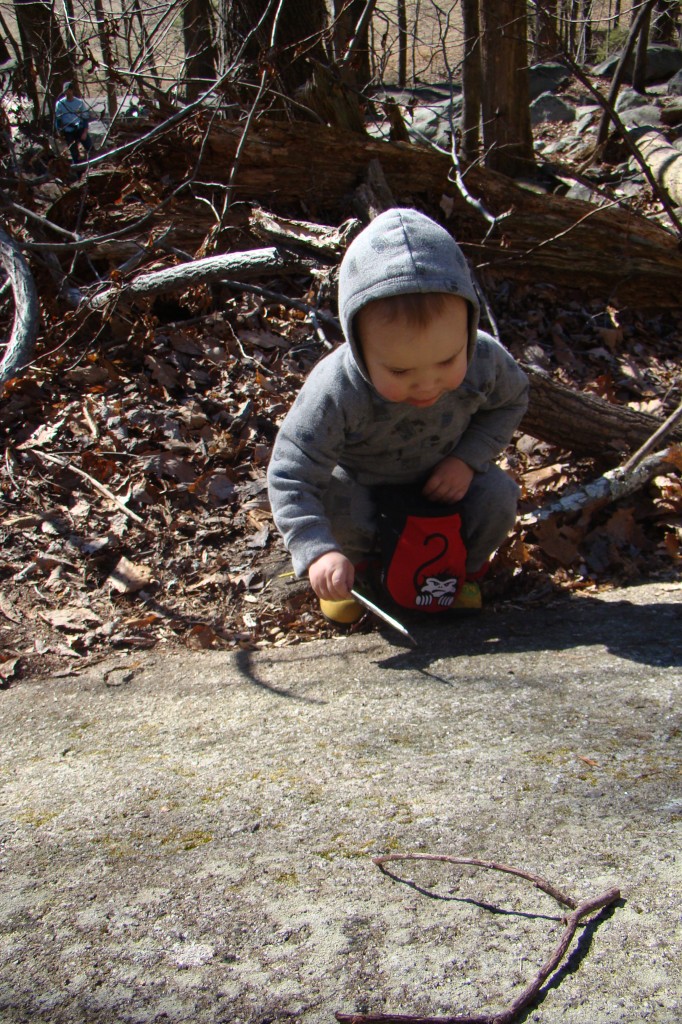 C trying to chisel out some holds with my nut tool...we're working with him on ethics.

The following week we headed back to Stone as a party of 3 climbers and 1 Cragbaby.  Although good times were had by all, it certainly wasn’t the most efficient way to tackle the mountain, considering that one person always had to be on the ground with C.  On a side note, this was C’s first time at Stone, and I’m glad that we waited until now to bring him, as the base is definitely not the most child-friendly.  Since he’s a curious toddler sporting some sticky rubber shoes of his own these days it was fine for him so long as somebody was with him, but I wouldn’t recommend Stone as a good crag for crawlers or early walkers.

Our day began on U-Slot (5.7), which is another good option for accessing the Tree Ledge.  The climbing is fairly sustained, but it’s somewhat well-protected, and the runout for the most part is on easy terrain.  At the top of the flake I opted for the variation that follows the dike up and left, exiting the roof with a very cool move through a small notch.  (The original line travels up and right at the top of the flake system to pull the overlap at the small scoop).  We then threw a toprope on Rice Krispies (5.10c X) and Captain Crunch (5.11a R), since nobody was feeling bold enough to get serious on the sharp end.  I had never done these routes before and I actually enjoyed them a lot – and as an added bonus, the security of the toprope made for a great playground to practice some sustained slabbin’ technique.  Our toprope setup was also perfectly in line with Crystal Lizard (5.8+), but since we were losing light fast we only had time for one person to take another lap, so Steve got in a bonus pitch.  He then of course decided to rub it in by raving about how fun the moves were and how interesting the features were – guess I know what road I’m gonna take next time I need to get to the Tree Ledge…

I still have plenty of vertical research left to do on the South Face, but I’m getting there.  It also was very helpful walking the cliff with Publisher Bill for photos and route description stuff (We decided the North Face could remain shrouded in mystery until spring when it’ll be a good deal warmer, but hopefully not too hot for friction). 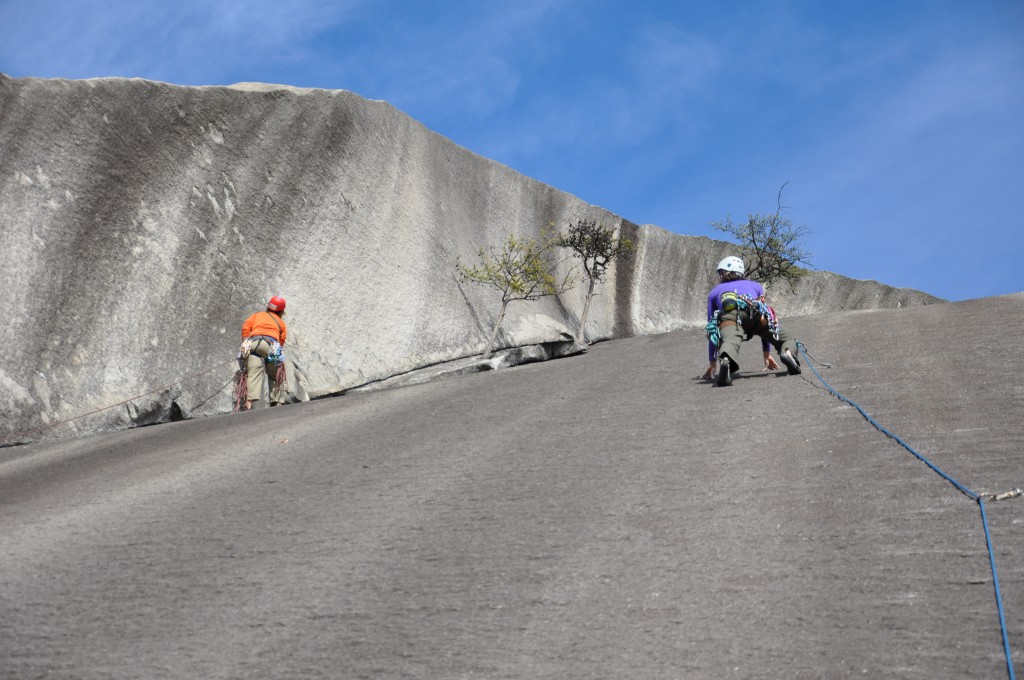 On another guidebook related note, soon and very soon I’m going to be tackling a creative segment that I will definitely need some help on.  As we all know, part of what makes climbing so special is the community of people who do it – and North Carolina certainly has its fair share of colorful characters!   Here’s where all you locals come in – I would like to include a section at the front of each area for short stories/anecdotes on that particular area.  I’m hoping to get a diverse range of climbers to participate – from pioneers of development to newbie leaders, and I am interested in stories of all types.  Things like what makes a particular area/route special, strolls down memory lane, epic tales of stuck ropes, route-finding blunders, hairy first leads, etc.  Anything is fair game.  My hope is that this section of the guidebook in particular will be the kind of thing that makes this book just as “at home” on the coffee table as it is in your climbing pack, the kind of thing that fosters comraderie among the diverse population of climbers in the region – whether you are pro-guidebook, not-too-sure-about-guidebooks, old school traddie, sport monkey, or someone just getting into the sport.  The vision is to make this guidebook not only a vital crag resource, but also an entertaining and enjoyable read.

So that being said, if you’ve got a blurb, story, anecdote, etc of any length that you wouldn’t mind being considered for inclusion in the guide, please send it my way, either by leaving a comment on this post, posting your story to the Carolina Rocks facebook page, or by dropping me an email (info(at)cragmama(dot)com).  (I’m also still in dire need of action shots, so feel free to send those on as well!)  Thanks all!

5 Responses to “Guidebook Update – Stories from the Stone Age”