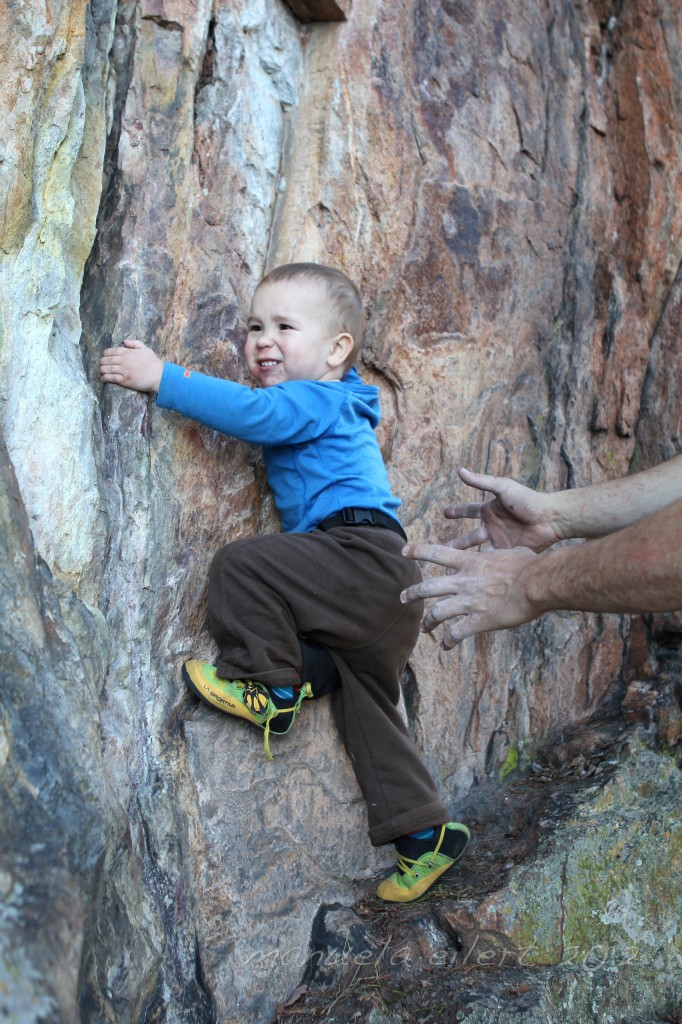 Well, after a day at Pilot and a couple of days at Stone, we decided to round out our Holiday stay-cation by giving some dear friends from our old stomping grounds in Raleigh a tour of what our new locale had to offer, rock-wise.  So last Friday we all took on Red Wall at Crowder’s Mountain.  After warming up on Opinionated (5.9+), Steve and Sam explored Scramble My Feedback (5.10a), while Caleb and I tackled an unknown, obscure line that as far as I know isn’t listed in any published guide (yet…).  Everybody took a lap on this one, and our grade consensus was 5.10c.  The business involves a couple of long moves down low, to a nice rest on top of a pedestal.  The rest of the climbing continued for another 40 feet or so on juggy rails and flakes.  The rock quality wasn’t the greatest towards the top, but with a little traffic I think this line could clean up pretty well.  At least as good as Master Beta (5.10c) and The Gimp (5.1c/d), this “new” line could very well be the best 5.10 on the Red Wall. 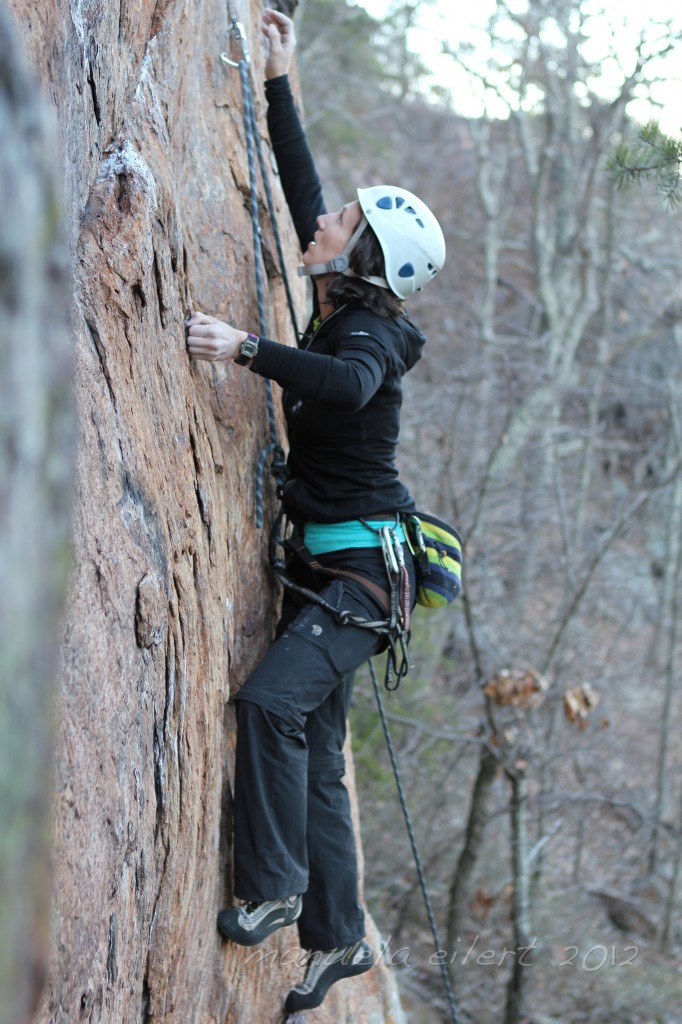 I spent the rest of the day working on Welcome to Crowder’s (5.12a), which I’d never been on before.  No send yet, but I made good progress.  Although I think the crux on its neighbor to the right (TKO, 5.12a) is actually harder, Welcome to Crowder’s is significantly more sustained, and takes a lot more juice to put it all together.  Though I’m pretty happy with my beta for the top half, I spent way too much time floundering around down low to come close to linking anything together.  In fact, I was so gassed at the end of the day that whenever I got through the initial crux I couldn’t even make the next clip.  It definitely felt doable though, and I can’t wait to get back there to try again when I’m fresh.

Friday night was a fun celebration involving a hodge podge of old friends, new friends, pizza, climbing movies, and even a birthday cake!  Cragbaby was thrilled to wake up on Saturday morning to find all of his friends still at his house.  Being the hospitable guy that he is, he took it upon himself to give everyone their own personal wake-up call!  After scarfing down some breakfast yummies we drove out to Dixon, where we met up with even more Raleigh peeps. 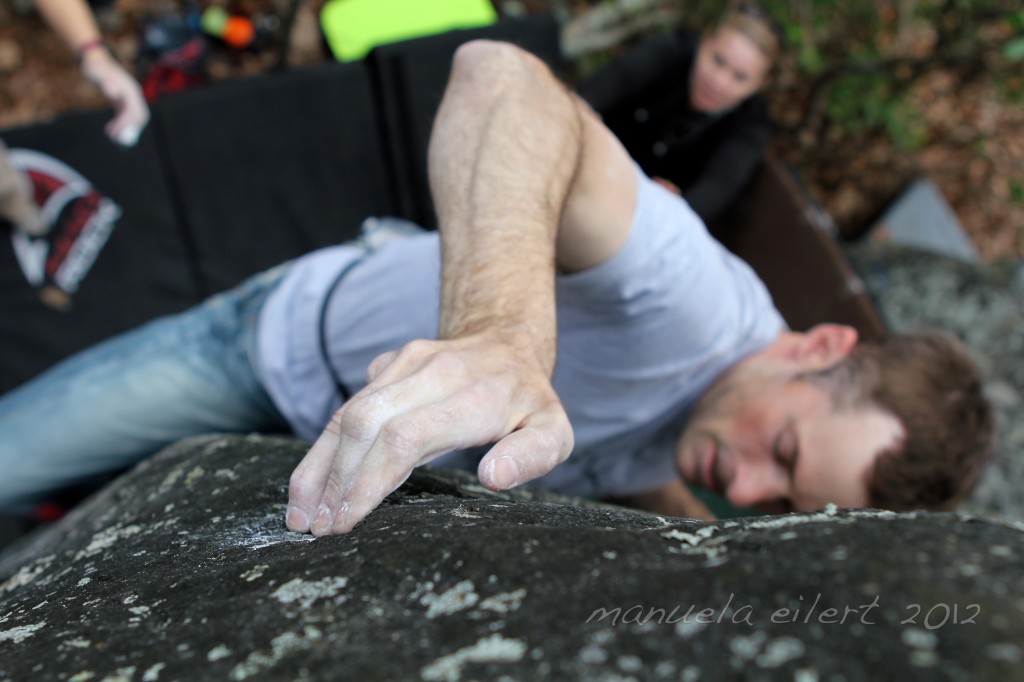 Bennett on the Eliminate Arete problem on the Y-Axis Boulder

We warmed up on Welcome to Dixon (V0-), Final Thought (V1), and Jerry Springer Low Start (V2).  I sent Lance Armstrong (V4) again, but it felt a lot more awkward than I’d remembered it feeling.  We then moved on to the Old Folks Home Boulder and hit up Backsplinters (V1) and Depends (V3).  Next we all camped out underneath Venom (V5).  This time I was able to consistently get to the very last move.  The good news?  That’s 1-2 moves farther than my highest point last time.  The bad news?  The topout is the crux.  I started losing steam after puncturing a hole in middle finger (Using the first left hand crimper is like pulling on the inside of a pin cushion), so I decided to shift over to the V2ish lines right beside Venom – Snake Jam and The Rattler, both really good.  Next stop was Galvatron (V3), one of my favorite problems in the field – tall enough with moves that are just long enough to make things spicy without being scary, and the landing is also everything you could ask for. 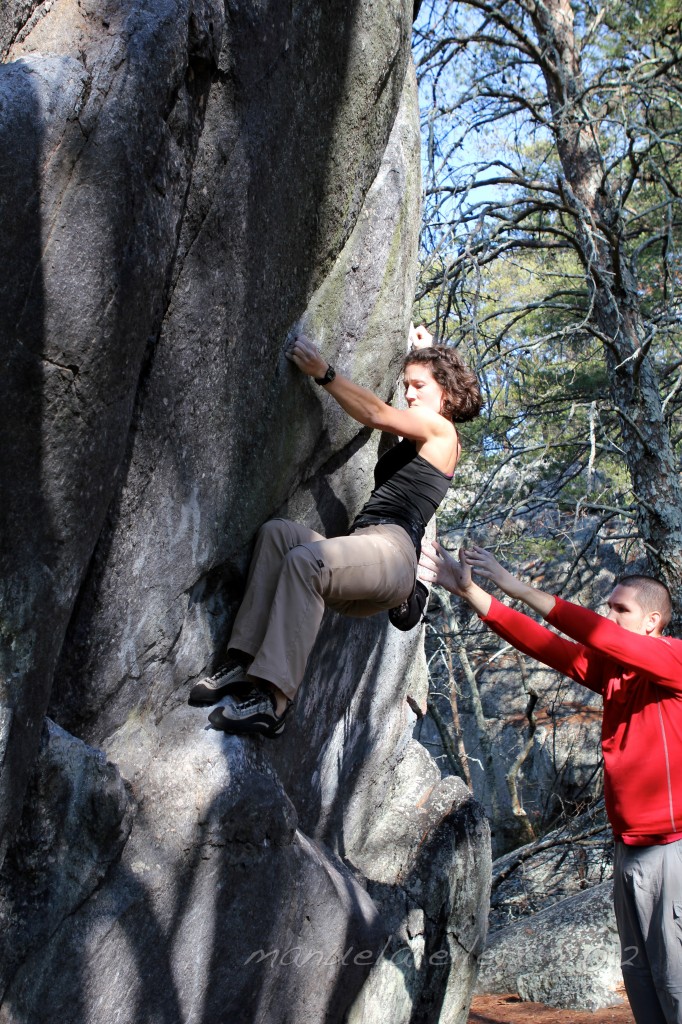 One of my many attempts on Venom

At this point everyone’s forearms were feeling a bit fried so we headed back down towards the Y-Axis boulder to hop on some easier stuff.  We walked around to the side of the boulder facing the road and were pleasantly surprised to find a sweet overhanging face filled with crimps, rails, and numerous opportunity for fun lines, as well as some cool eliminate variations.  Bennett and I worked a cool arete problem that had a crazy core-intensive start that I was able to figure out pretty quickly, but then couldn’t finish because I kept coming up a couple of inches short.  I guess next time I need to bring the big girl pants and break out the dyno…

Who would’ve thought that any day January would necessitate tank tops – let alone 2 days in a row!  After taking complete advantage of the freakishly warm weather, we ended our Real Rock Tour at Big Daddy’s Burger Barn, where despite a full-day of climbing on minimal foodage, the real crux was finding room for all that beef in my stomach.  (I didn’t send…only got about halfway through…)  This is the first in a while that we’ve had enough great photos to warrant a separate album (Thanks Manuela!), so if you’re interested in seeing more documentation of our crushage, click here.