I mentioned before Christmas that the first week in January was going to be celebrated as “Highlight Week” here at Cragmama.  It seemed appropriate to kick things off with the Hit List.  Some of you may remember  my 2011 Hit List that I published last March, where I listed 10 goals (some very specific, some rather general) that I had my sights set on for the year.  I remember at first being a bit hesitant about posting them for the world to see, since I wasn’t entirely sure that some of the objectives were even in my realm of ability.  However I’m really glad I put myself out there – not only did it keep me motivated and focused all year, but the kind words and encouragement I received as I was making progress was an ongoing example of how supportive the climbing community is!

So 2011 has come to a close, and my list will soon be replaced with a new list for 2012.  But before the Hit List hits the archives, here’s a final recap of how I fared against my objectives for the year. 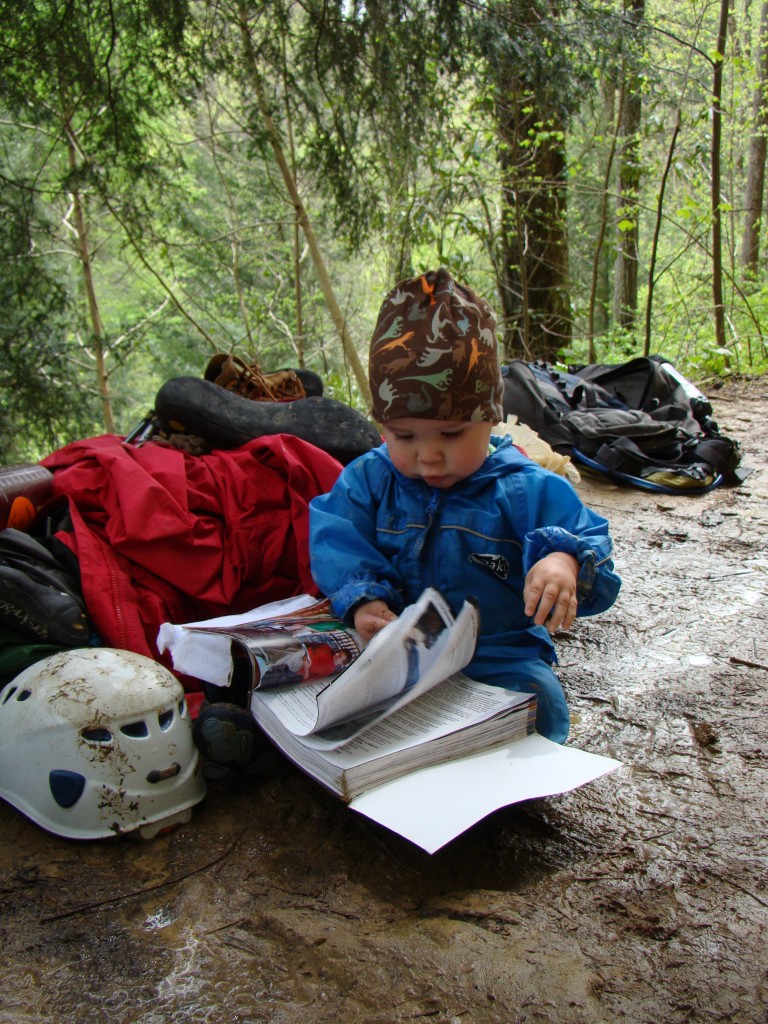 New adventures for the whole family in 2011!

– This send was a definite bright spot during a rainy weekend in Tennessee this past June.

2.  Redpoint New Yosemite (5.9+) at New River Gorge, WV – Didn’t get a chance to check this one off…we managed to make it to the New River Gorge 5 times this past year, but for one reason or another never ended up at the Junkyard.  If I’m being completely honest, I’m not a huge fan of the Junkyard because of all the crowds, so had this line been elsewhere in the gorge, I’m sure it would have been higher up on the priority list.

–  Ticked this one off at the New River Rendezvous this past May.  It was just as classic as I’d remembered it, but a lot easier than the time before when I was preggo!

This past year was the first year that I actually started getting more of a “project” type mindset, especially when it comes to local areas that I can hit all the time.  Now that I’ve discovered its worthwhile for me to work high 11’s and low 12’s, there will be no shortage of projects in my range for the indefinite future.  This past spring before it got too hot I began exploring what Hidden Wall had to offer at Crowder’s Mountain.  Though the burly, scrappy style of climbing found there is not something that I’m usually very strong at, east-facing Hidden Wall will be a great place to have close by for cold and crisp sunny mornings this winter. 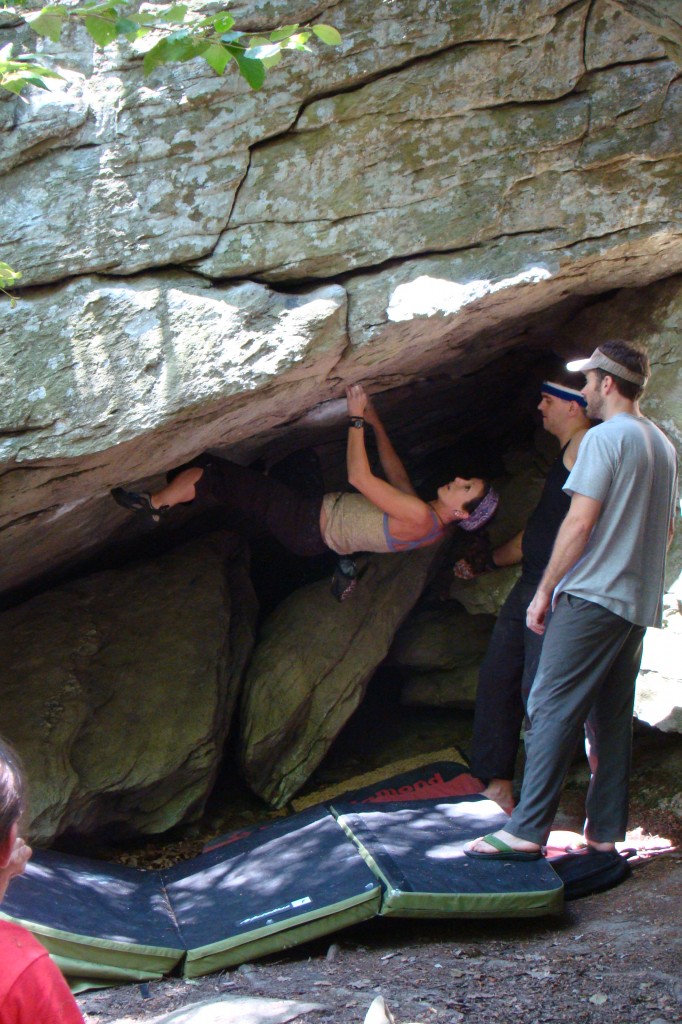 We found plenty of new projects at new areas this year!

–  The original goal was to just get to the top on lead, bolt to bolt, and I assumed it would take several attempts to even make it to the top.  However, I surprised myself by getting to the top of Pockets of Resistance (New River Gorge) on my first go in July, as well as 5 other times at my next visit in August (unfortunately all of those included a fall at the crux, so no send yet for that one!).  Since Pockets had gone so well, I decided that an actual 12a redpoint might be in reach, so I upgraded my goal to a legitimate send.   We never made it back out to Kaymoor to finish up on Pockets, but after a few bolt to bolt leads on some other 12’s here and there (including a bail-biner or two), I finally managed to cross this off my list 2 days before Christmas on a local mission to Crowder’s Mountain, with a 4th go send of TKO!

– Though roofs are still not my forte by any means, I’ve made some progress in that department, and definitely have seen a lot of improvement in my skills on steep walls over this past year.  Aside from Heresy (5.11c), a lot of my big roof attempts still ended with a bailer biner or the Texas rope trick.  However, I had several notable pocket-infested jug haul sends over our spring and fall trips to the Red River Gorge – Weed-Eater (5.11b),  On Beyond Zebra (5.11c), and King Me (5.11b).  Ironically, the first two were onsights, and the latter was a flash (its amazing how much bolder you can be on the first go knowing the only thing below you is air!) 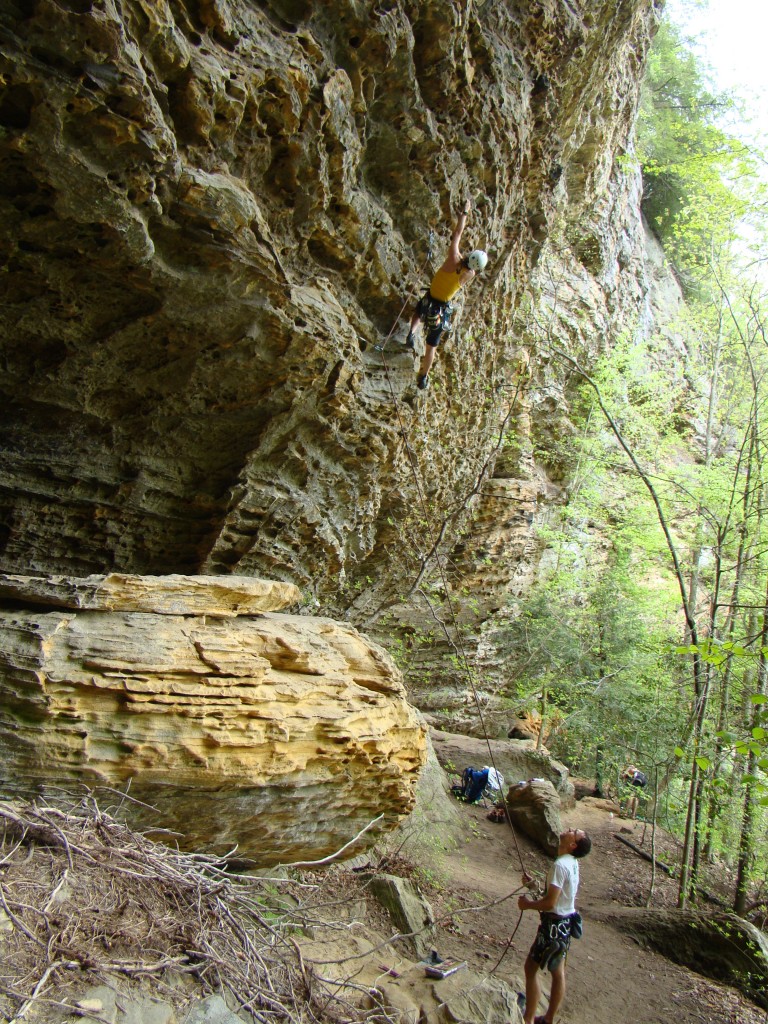 Steep pocket-pulling at the Red River Gorge last April on On Beyond Zebra (5.11c)

,  , Foster Falls and/or Tennessee Wall, TN – Our friend Matt gave us an excellent tour de Grandmother this past July, and as I said got out to the Red twice.  We did make it out to Tennessee twice this year, but both of those times were to the Obed – so no check off yet for the Foster/T-Wall combo.

– Though I still climbed a disproportionate amount of clip-ups compared to gear routes this past year, I definitely got my trad on a decent amount, especially towards the end of the year.  I didn’t try anything that approached my limit, but I got comfortable on gear again, which was the purpose behind this goal, since trad lines had taken a backseat to bouldering once Cragbaby had entered the scene.  A bonus was that we were able to do our first post-Cragbaby multi-pitching together at Stone Mountain!  Look for the bar to be raised a bit on the trad Hit List for 2012.

– Since I’ve only really gotten into bouldering since Cragbaby’s arrival, I had been a little inconsistent – flashing V4 one minute, only to get shutdown by the V2 just next door.  I figured I just needed more mileage, so every bouldering area we went this year I made a point to get on anything and everything, which seemed to go a long way towards consistency.  While I didn’t send anything harder number-wise this year over previous years, I found myself a lot more comfortable committing to taller, more sustained problems. 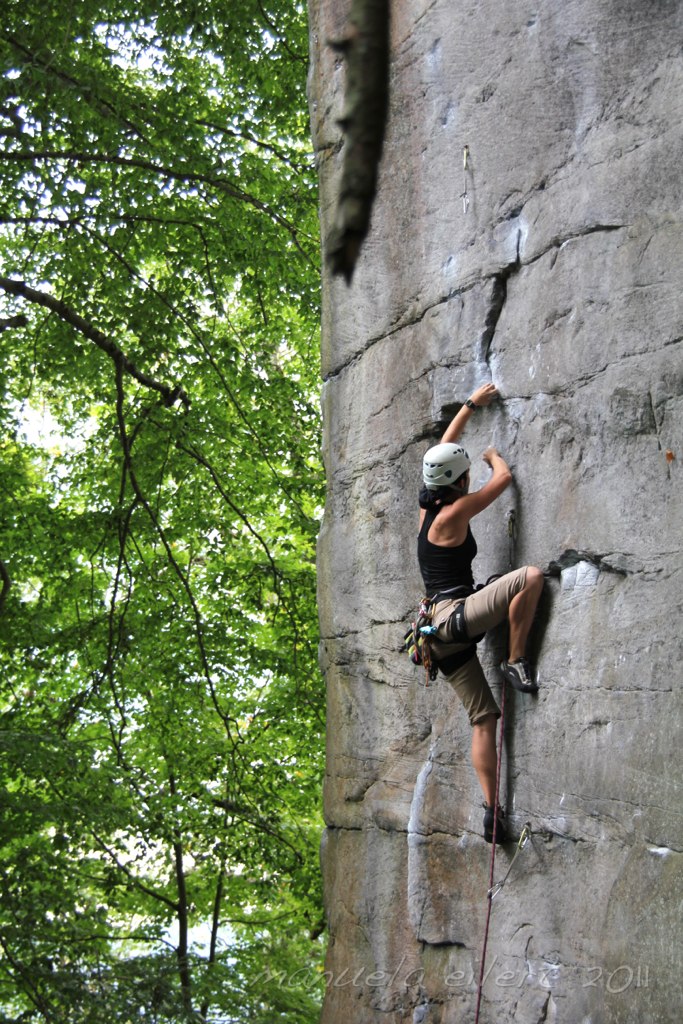 The first hard move on Pockets of Resistance (5.12a), NRG

– With so many people willing to teach and mentor us along our journey as young, inexperienced climbers, it only seems fitting to pass it on.  This year we were able to lure a couple of Steve’s co-workers into our climbing crew (both had dabbled in indoor climbing off and on so it didn’t take too much enticing…) Evidently they couldn’t resist Steve’s daily psych at the office.  🙂   We roped them up at Crowder’s a couple of times, and took them out to Dixon to boulder.  It’s been refreshing to see things from a different perspective, and also really nice to have partners at the gym so Steve and I can rotate who watches C!

So I guess that wraps up a spectacular year!  We lucked out with some fantastic weather weekends, made the best of some crappy weather weekends, and met a lot of really cool people along the way.  Not ticking New Yosemite?  Eh, who cares.  It’s a case of failure to try, rather than tried and failed.  I’m sure at some point I’ll make it up to the Junkyard, and I’m sure that hand crack will still be there, ready and waiting.  In its place I found plenty of other high quality trad lines of equal caliber.  And not hitting Foster Falls/T-Wall?  No biggie.  Our crew was too busy crushing at other crags around the Southeast, and that’s a good enough excuse for me!  And with tentative plans for a trip out west in March, and some exciting news on the sponsor front (more on that later 😉 ) 2012 is already shaping up to be even better!  And with a new year, comes a new Hit List, so stay tuned!