In light of my latest footwear trend, all trip reports to climbing destinations, exotic or otherwise, will be on hiatus for a quite some time.  However, since injuries are an unfortunate and inconvenient fact of life for everyone at one time or another, I thought it might be worthwhile to document how I’m getting through this without going crazy (more or less).  I’m certainly not the only one that’s been sidelined for a while, and since writing has always been a therapeutic outlet for me, I thought that weekly injury “trip reports” might be a healthy coping mechanism, as well as a way to measure my progress. 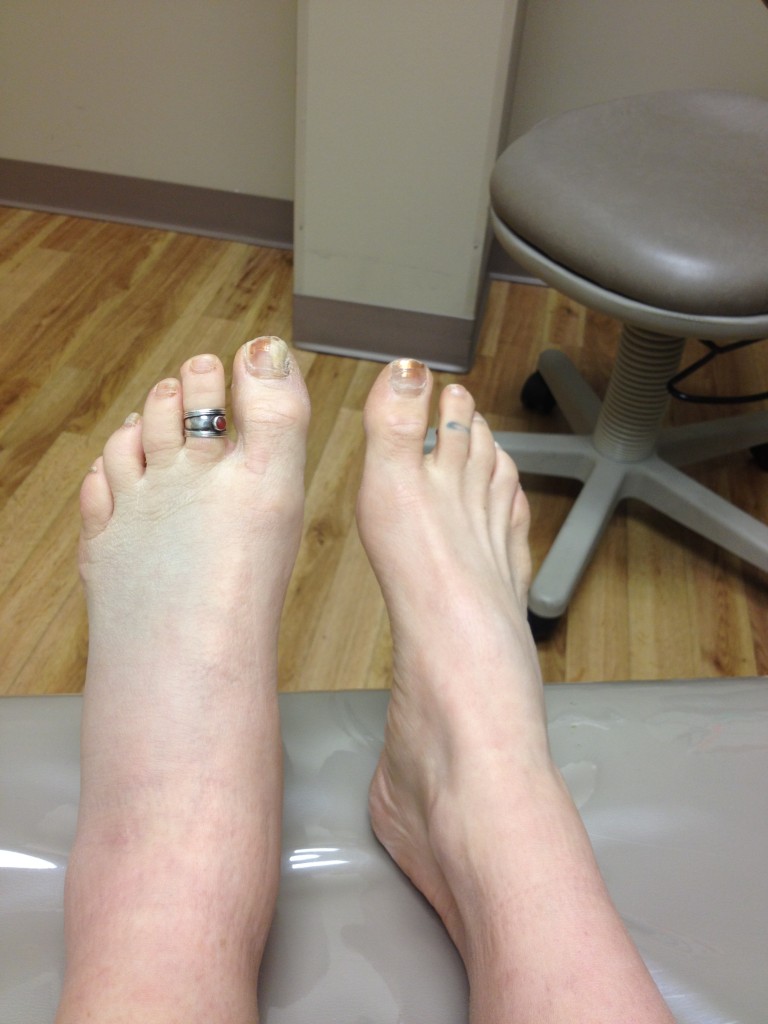 Day 1:  After being hauled out to the road (thanks Steve, Bennett, Norbert, Manuela, and Chuck for carrying more than your fair share), I spent the rest of the afternoon/evening soaking my foot in a pot of ice water and feeling sorry for myself.  I also scrounged around and found some hydrocodone leftover from my last incident involving pain meds in Maple Canyon a few years ago…  I slept well Saturday night.

Day 2:  Hobbled around all day as we went to church, Jesse Brown’s Outdoor Store, and the locally famous (and sometimes infamous) Gus Glitch’s bouldering barn, where we stopped by to visit a few friends and pick up a birdhouse Gus had made just for Cragbaby.  Popped a few more hydrocodone and watched helplessly as my ankle continued to swell all the way down through my toes, despite all of my icing and ibuprofen efforts.

Day 3:  Frustrated that I couldn’t get a same day appointment with the orthopedic doctor (apparently I wasn’t the only one that got hurt over the weekend), I went to see a podiatrist…who was the worst doctor I’d ever been to.  She told me it was broken, but proceeded to give me nothing but vague instructions and prognoses and was far too wishy-washy than I wanted to hear.  In one breath I needed to stay in the boot for 6 weeks before coming back for a checkup, and in the next sentence she was telling me it was okay to climb in a week if I had a brace on.  I did a lot of crying and feeling sorry for myself on the way home.  More hydrocodone ensued that night. 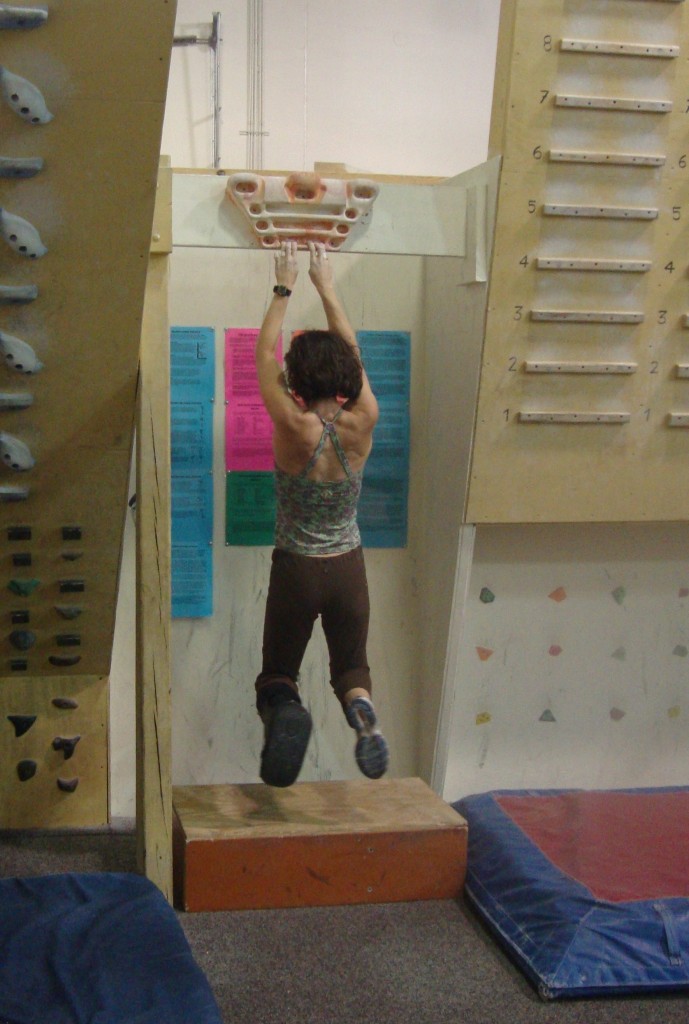 I'll be spending a lot of time here over the next few weeks...

Day 4:  Went to see a very sports medicine minded orthopedic doctor, who despite delivering the same diagnosis (small, non-displaced fracture of the talar dome), seemed much more knowledgeable and organized.  As someone who can get easily obsessed with small things I find that I do well with a doctor that pays attention to detail and will give me very specific instructions about what I can (and cannot) do at every stage in the game.  I was told to be in the boot constantly – the only time I’m allowed out of it is for icing and for showering.  We are going to reassess with new X-rays in 2 weeks.  I went to the climbing gym this afternoon to take out my frustration on the hangboard (since I don’t need 2 good feet for pull-ups…).  Of course there was a lot of explaining to do to everyone there when they saw me hobbling around in a boot.  In some ways it felt good to talk about it, but in other ways it was dangerous – with each person that asked, I felt closer and closer to bursting into tears.  Thankfully I held myself together long enough to burn my forearms up.

Day 5:  When I went to bed last night I was pleased that I was pain-free with the boot on and hadn’t had any pain meds (narcotic or otherwise) since the afternoon, so I was really disappointed to wake up to a constant dull ache this morning.  Not only was sleeping in the boot NOT fun (I gave up and came out of it sometime around 4 am), but my ankle is already amazingly stiff from not being able to move.  Everything in me wants to stretch it out and give it a few good rotations, but movement is off limits until it heals some so as not to displace the fracture.  I went to the chiropractor today – its far too soon for it to be adjusted (although I’m sure that the impact knocked everything out of whack down there), but I got a couple of different treatments that are supposed to speed up the body’s healing process.  One involved a laser and the other involved some sort of electromagnetic something.  Both encourage blood flow, reduce inflammation and promote healing at a cellular level.  Both modalities were easy to do and harmless to try, so even if its a bunch of mumbo jumbo snake oil, I figure its worth a shot.  It feels good to at least be able to do something proactive.  While everyone else in my house went jogging I perfected my gymnast ring push-ups and did a lot of other upper body work on my antagonist muscles. 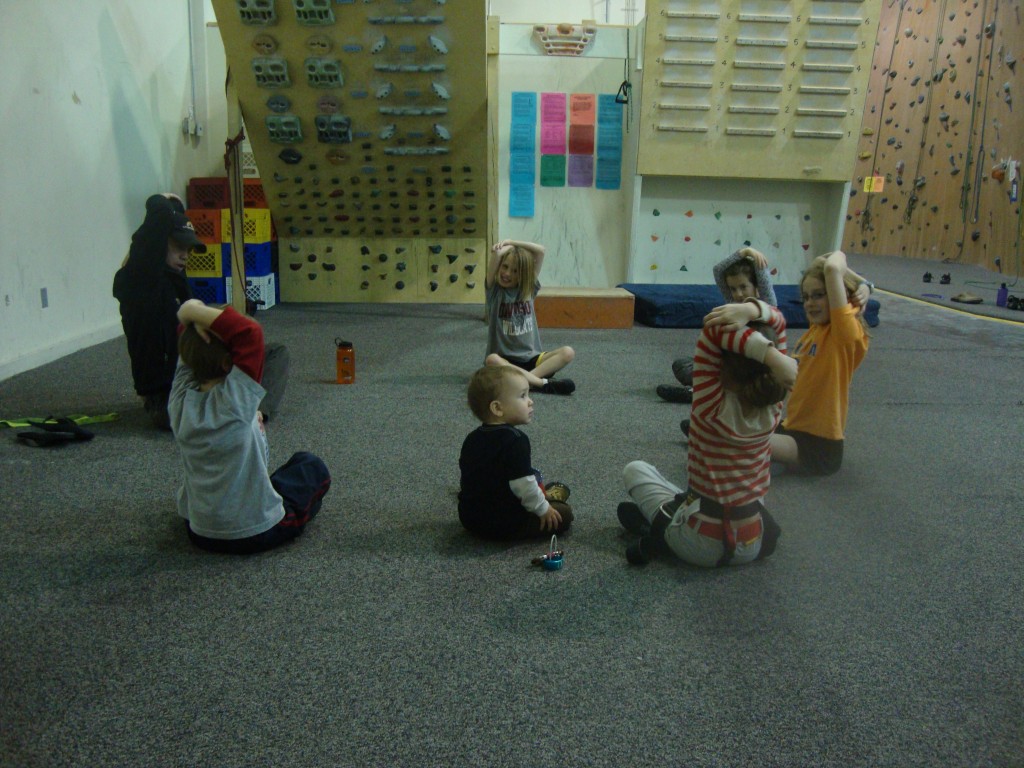 Just in time to oversee the stretching!

Day 6:  I made an executive decision for my own personal sanity to lose the boot while I was sleeping (or lack thereof).  Instead I slept in my ankle brace, which still kept my ankle stabilized without the added bulk, extra heat, and overall annoyance of the big boot.  I still woke up a little stiff, but with a much better outlook from a full nights sleep.  Got in a great hangboard session – worked pinch, sloper, open-handed crimp, and offset hangs, and rounded the session out with 5 sets of pull-ups to failure.  The best part of the afternoon was watching Cragbaby schmooze his way into climbing team practice. 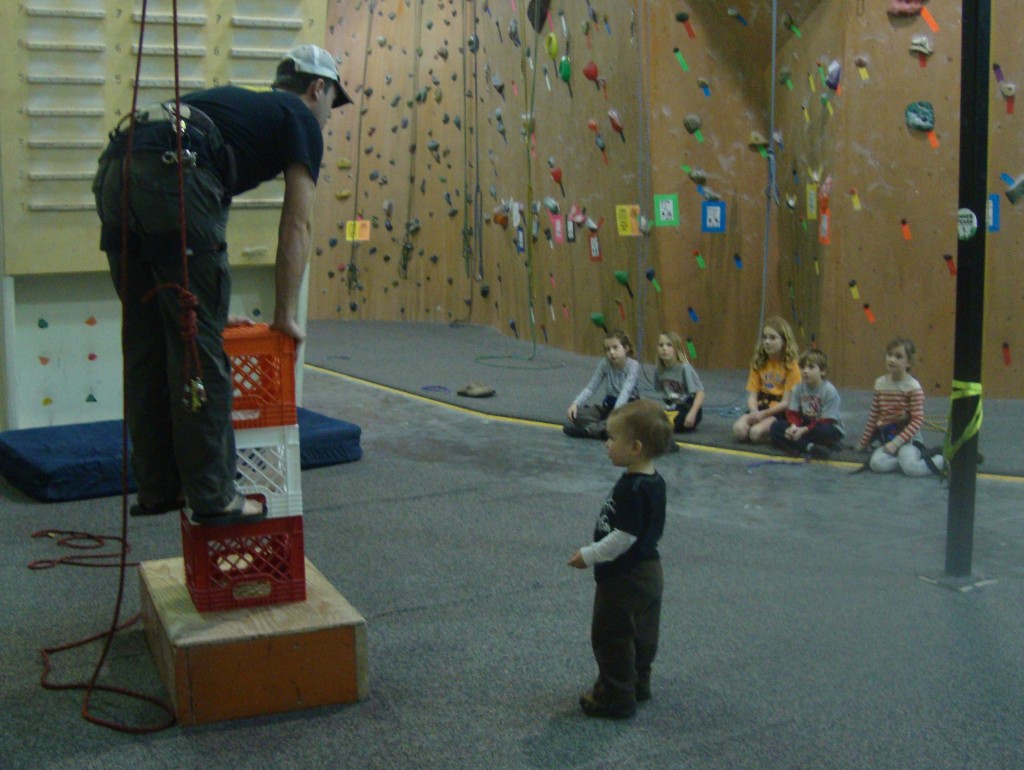 Try to convince him he's not really on the team...I dare you.

Day 7:  I hate wearing shoes in the house, but its a necessary evil unless I want to gimp around like a pirate with a peg leg.  The only shoe that comes remotely close to matching the height of the boot is my running shoes.  At least Cragbaby has come to terms with my new footwear.  Initially he was afraid of it, but today he spent a good bit of time today patting it affectionately and saying, “Boot, Mommy, boot Mommy,” as he moved in to give it a kiss.  A Cragbaby kiss may not make it all better, but it certainly takes away some of the sting.

Day 8:  It’s the first day since I can’t remember when that a Saturday morning has dawned sunny and I have no plans to be on the rock.  For reasons beyond me (but I won’t question it), Cragbaby somehow got the memo about not needing to be up early, so we got to sleep in til the unheard of hour of 8:00.  I can count on one hand the number of times that has happened in the past 23 months, and it was certainly well-timed today.  Being severely limited in what I can do for exercise, I squeezed in another upper body workout in the gym this morning.   No hangboard today though, as the last thing I want to do is overtrain my finger tendons. 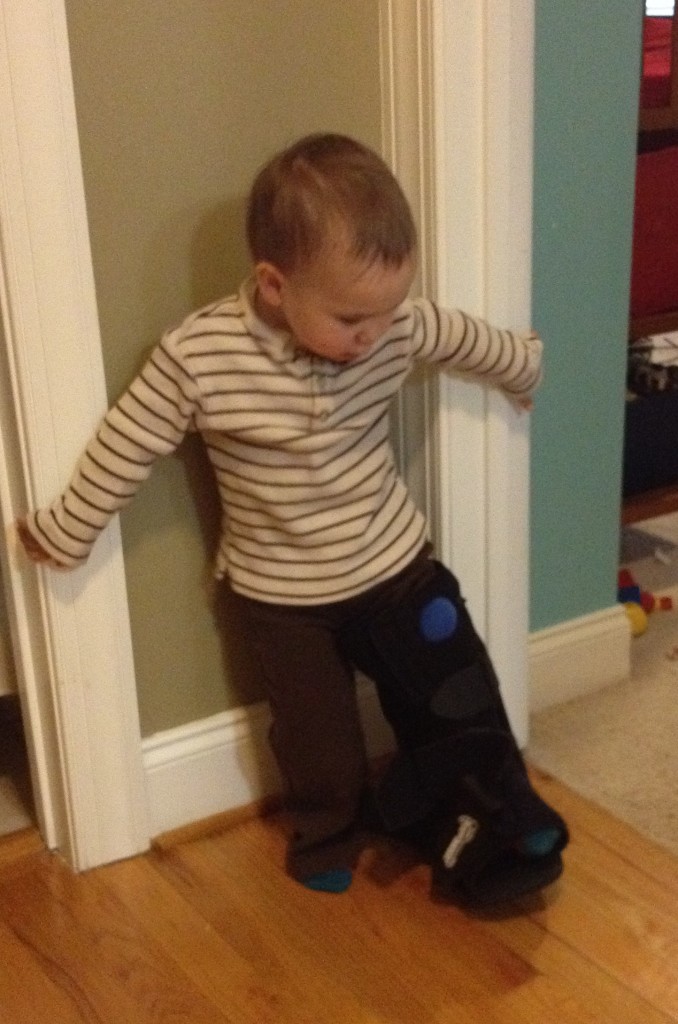 Day 9:  A cold and rainy day – I found solace in the fact that I wasn’t the only one stuck inside unable to climb.  At least it was good guidebook writing weather…Not sure if it was the dreariness or what, but my ankle was pretty achy when I woke up.  I had to pop some Vitamin I for the first time since earlier in the week.

Well, one week down with not sure how many to go, but its one week less than it was last week.  I’ve managed to hang onto my sanity for all except for a few minor glitches, so I guess that means so far so good.  Stay tuned for another report next week…