It’s been an interesting week, less emotional than the first one, and with an end goal in sight that I can live with. 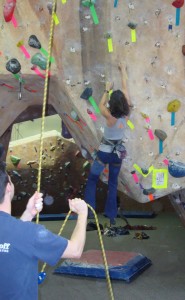 Going Foot-less on the Campus Route

Day 10:  Being that it was President’s Day, Steve had the day off.  Being that it was a clear, gorgeous day without a cloud in sight, the big boys all went climbing.  Of course Cragbaby incorrectly assumed that meant him too – he got really excited when he saw all the backpacks and climbing gear come out, and enthusiastically helped his Daddy load the car.  But when everyone said good bye and hopped in the car without him, he quickly realized that he would be stuck at home with boring old Mommy and that blasted black boot.  An 8.5 on the Richter scale temper tantrum immediately ensued, with C laying on the floor and screaming, “Kime, Kime! (climb)”.  You and me both kiddo.  Although an embarassingly large part of me wanted to join him and his antics on the floor, thankfully I was able to distract him away from the door after about 15 minutes.

Day 11:  Good hangboard session today.  I added a couple more creative grips to my repeater circuit – a gaston type crimp and a side-pullish crimp, both on the HIT Strip wall.  I’ve decided that a goal of 5 sets of 10 pull-ups at the end of each workout should be  reasonable to achieve by the time I am boot-free.  A month ago I could do around 4 or 5 per set, but just recently I’ve been able to hit 8-10 on the first few sets, although the last couple of sets I’m still lucky to get 6. 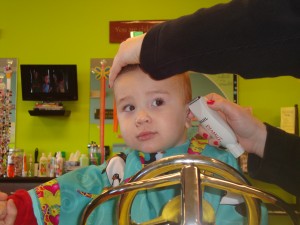 If you have to be stuck indoors on a lovely Saturday, a kid's hair salon is an amusing place to do it...

Day 15:  Another bright and beautiful Saturday spent away from the rock.  At least we had a few things lined up for amusement purposes – Cragbaby finally (just a few weeks shy of his 2nd birthday) went in for his first haircut.  We all played the role of South Charlotte suburbia family and took C to a special kid’s salon.  Our evening was spent at a different type of hangout, however – the tattoo parlor!  (More on that later…)

Day 16:  Our  crew spent the afternoon in the climbing gym today.  I dutifully did some weight lifting (more on that later too…) and logged some time on the special campus route my favorite routesetters at Inner Peaks put up for me.  It was definitely a challenge – I was able to get about halfway up before my arms refused to pull without any assistance from my legs, so I cheated and used only my good foot the rest of the way.  A few of the moves are so long that I don’t hold out much hope for being able to finish it the correct way any time soon, but it feels great to have something I can play around on.  The highlight of my day however was top-rope crushing the easiest route in the lead cave.  Not knowing what’s going on inside that boot of mine, I didn’t feel comfortable using the bad foot at all, but the cool part was how that forced me to have to get creative about body position in order to let it hang freely.   I was pumped stupid by the time I finished, but was encouraged to get to the top clean (aka “Boot-point.“). 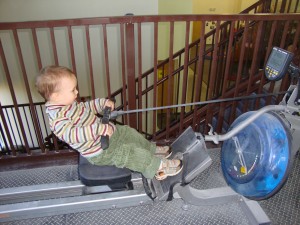 Cragbaby getting his own workout in while Mommy lifts weights.

Day 17:  The last time I was this excited to go to the doctor was on ultrasound days during my pre-natal appointments.  I knew I’d been a good girl and done all the right things, and I was anxious to check out my latest X-ray to see if their was any progress.  Everyone including the doctor had told me prior to coming in to not be alarmed if there was no change on the X-ray since it had only been 2 weeks – that in fact no news was good news and meant that the bone was staying in place.  I’d be lying if I said I didn’t have my heart set on improvement though – and fortunately for me I got the reaction I was looking for!  The doc was delighted to see not only an almost complete healing from the vertical hairline crack, but a good start to the fusing of the top part of my talar dome to the rest of the bone.  In fact he said the X-ray could not have been any more perfect at this in the game (+1 for those snake oil treatments at the chiro…)  Palpating the soft tissue around the joint was not tender at all, save some tightness here and there (which is from being stuck in the boot all the time), so that means any collateral ligament damage is healing up quite nicely.  In other words, at my next appointment in 4 weeks, the doc is fully expecting to release me from Boot Camp with no restrictions other than wearing a brace for a while.

At first I was a little disappointed at 4 more weeks in the boot, but now I’ve got a date I can countdown to.  And the doc did also say that now that we know the bones are fusing, there is no longer a need to take it easy on the bad foot, so long as I promise to wear my boot.  That means going on walks, riding a stationary bike, using an elliptical – if I can figure out how to do it in a boot it’s all fair game.  As far as climbing goes, I’m not supposed to be putting the boot foot in any sort of position that puts torque on the ankle joint.  That means I’ll still be glued to the hangboard for a while (with a few stray campus/three-limbed boot-point sends here and there to keep the psyche up).  That also means I’m putting my fair-weather request to the meteorologist NOW for the weekend of March 31st…