As I said in yesterday’s Sentimental Snapshots post, I’m not so sure that “Cragbaby” is such a good moniker anymore…but that for nostalgia purposes, we’re gonna let it stick as long as he’ll tolerate it.  But regardless of semantics,  our modus operandi at the crag has certainly evolved a good bit from those early weeks with an infant.  Since we’re celebrating moving from baby to big boy phase, I thought it would be fun to have a look back at C’s favorite “cragtivities” from the past 2 years.  Hopefully this stroll down memory lane will provide some good ideas to all the parents of very wee ones out there for how to entertain your little one while the rest of the family crushes (or at the very least, prove that it doesn’t take too much to keep a baby happily occupied!)

1.  SLEEPING:  Ok so this might not have been Cragbaby’s favorite cragtivity, but he certainly spent a lot of time doing it that first year, which was a great time to really focus on sending projects.  Nowadays I’m psyched if I can get an hour out of him at the crag.

2. EATING: Especially around the 9-12 month stage when fine-motor coordination skills are starting to emerge, something as simple as a bowl of Cheerios could provide entertainment for a solid 30 minutes, which in baby time is the equipvalent of 3 hours. 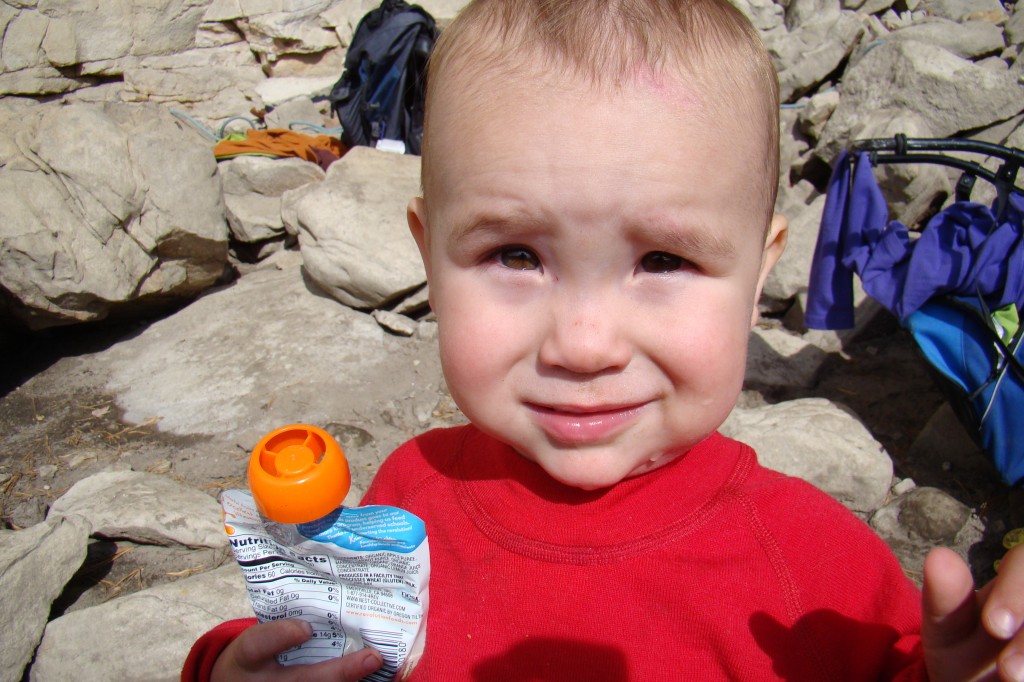 3. DRINKING: I guess its no surprise that sucking on a Camel-bak nozzle would be intuitive for a baby, but C certainly took great delight in staying hydrated. Initially he just wanted to suck – it didn’t even matter if the mouthpiece was locked or not. It was a lot easier to keep clean (and keep track of) than a paci!

4. MAKING A MESS: It’s shocking to me how much dirty laundry we bring back from a weekend at the crag! I shudder to think at how much dirt (and probably worse) Cragbaby has swallowed in the course of his 2 years so far, but I think there may truth to the idea that “a dirty kid is a happy kid.” A lot of the early months at the crag were literally spent wallowing in the dirt with C – and in his defense its hard to stay clean when you get from point A to point B on all fours!

6.  HUNTING AND GATHERING:  Collecting and stacking rocks (along with pine cones, sticks, etc) turned into a favorite past time sometime shortly after C’s 1st birthday.  Actually, the stacking part was really just a means to get to the good stuff – the complete and utter annihilation of the entire stack. 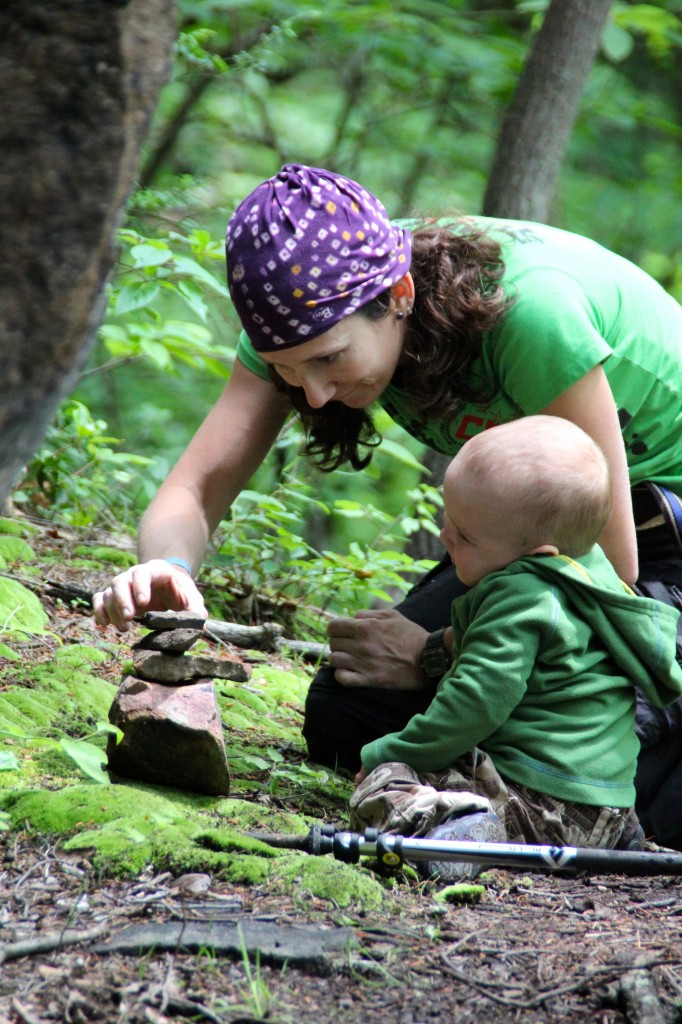 7.  CREEPY-CRAWLIES: Spiders and Crickets and Worms, Oh My!  Whether it was just observing with fixed fascination (first few months), daring to reach out and touch (around a year), or putting a creepy-crawlie lovingly in some unexpecting person’s face for closer inspection (early toddler…), our climbing trips usually involved encounters with all three of the above.

8. HIKING: C knew he was a happy hiker at heart even before he could walk. Whether it be an actual trekking pole or a stick/stick clip used for that purpose, an astonishing number of our pictures feature C and some sort of hiking apparatus.

9. CLIMBING GEAR: In the beginning it was all those shiny cams. Then for a while it was Mommy’s nut tool, for which C discovered an untold number of off-label uses. But the common theme has always been – the rope.

10.  CLIMBING:  This is, of course, the end goal after all.  From patting his hands on the holds, to crawling over small boulders, to actually slapping on shoes, chalkbag, and harness, C has always been an avid participator at whatever level he was developmentally ready for at the time.  I have no idea whether or not climbing will become his “thing” as he grows older, but regardless, our family will always treasure these memories we have made together these first two years.  And it wouldn’t surprise me if the day comes when I’m relegated to top-roping his warm-ups…

We were never ones to want to lug in a whole bunch of toys to the crag.  I always felt like there was more than enough in nature to keep him occupied, and so far we’ve been right.  Now that C is older and into mobile exploring, our playspace has certainly expanded, but the premise remains the same.  His imagination runs wild and his pockets are filled to the brim with special treasures.  Some days I’m convinced that Cragbabyhas even more fun than we do!

We’ve had so many fun memories, both on the rock and off these past two years.  While saying good-bye to C’s “baby” years is certainly bittersweet, I’m looking forward to seeing what lies ahead of us!  For you families out there still in the infant phase (or with fond memories of it anyway), what are (were) your little one’s favorite “cragtivities?”

6 Responses to “Favorite Cragtivities for the Under 2 Set”