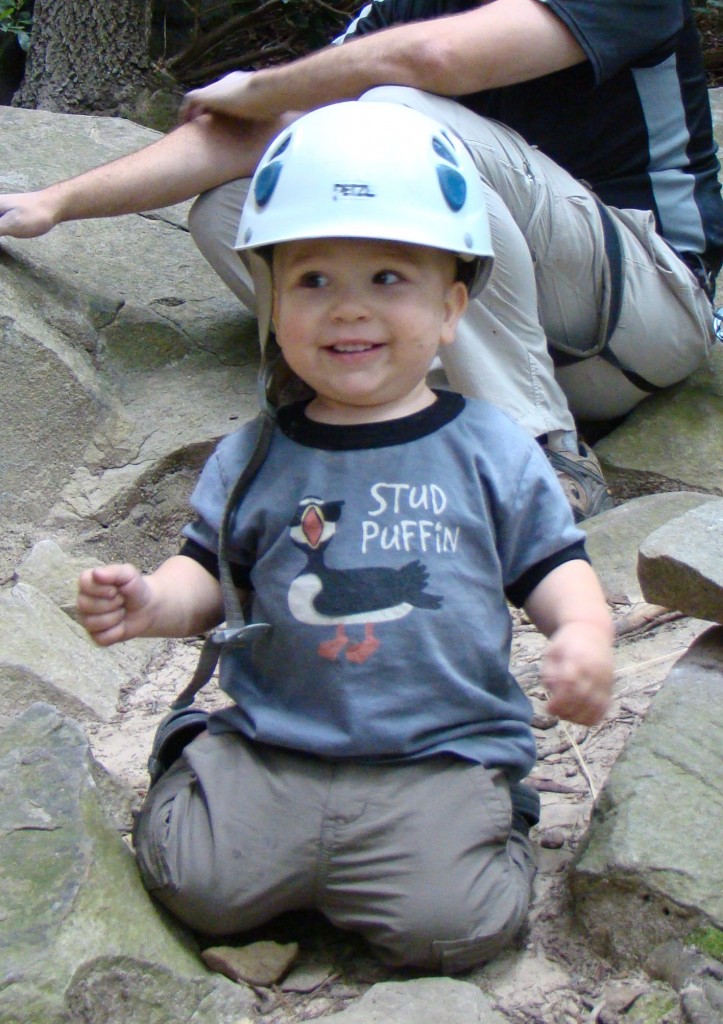 Those of you that have been loyal readers for a while now may remember a post I did last October about my stance on helmet usage, as part of a Helmet Campaign from Petzl and their marketing guys over at Pemba Serves.  It certainly got quite the response – 107 comments even!  While I’d like to assume it was my literary prowess and creative wordsmith-ery that compelled such a reaction, in truth I must admit that it probably had more to do with the fact that Petzl was giving away a free helmet to one lucky commenter.  Excerpts of my post were melted into a larger post on the Pemba blog, and apparently the feedback was quite good there as well. Petzl in fact was so delighted with the results of the October Helmet Campaign that they decided to launch another initiative – and this time with even more opportunities to win free brain buckets!

Since I wrote the piece on helmets last fall, my attitude hasn’t changed too much.  I still try my best to live by the theory that “Brains are soft and rocks are hard – but thankfully so are helmets!”  But interestingly enough, this new campaign does come at a somewhat ironic time for me, considering that I am currently sporting a rather unattractive walking cast on my left ankle for 20 more days (more or less, but who’s counting… ;)).  Some of you might be saying, “Yeah it sucks you’re stuck on the couch, but what does an ankle injury have to do with helmets?”  Nothing really, except that the nature of my bone-breaking fall definitely left me with a renewed vigilance regarding the use of hard hats.

To me what was scariest about my fall was that I didn’t do anything “wrong.”  Althought it might have been more embarassing, I think it would actually be easier to deal with had I done something specific that I could point to and say, “This is why I broke my ankle.  Don’t do that anymore and it won’t happen again.”  I didn’t backclip.  I didn’t fall with the rope behind my leg.  I didn’t run it out on chossy terrain, nor did I have any trouble with route-finding.  My first lead attempt on the route ended one move (and oh how often has that one move replayed itself in my head!) away from the anchors – a nothing but air 15-footer ending with a nice soft catch.  I had no reason to think subsequent attempts would produce anything but a similar result.  The next time however, my foot snagged a section of the rope that wasn’t flush against the rock, lower down on the route in between two bolts.  My routine fall suddenly and without warning turned into a violent helicoptering motion that ended with my foot shattering against the wall. 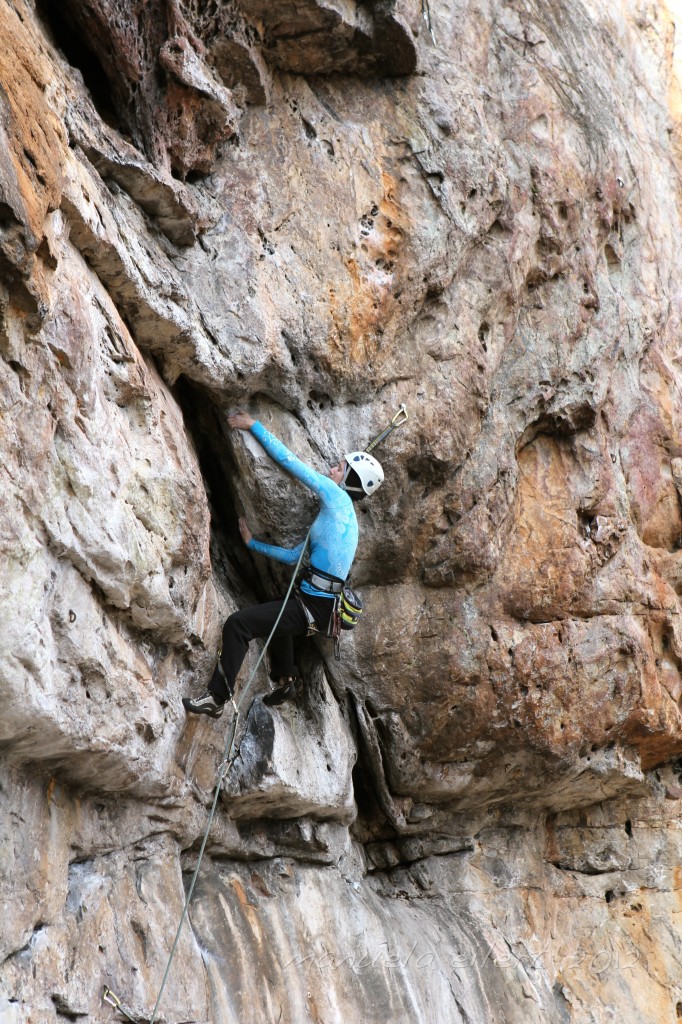 Hugging my way up the awkward crux bulge on Slabster's Lament (5.12a/b), just a few moments before helicoptering into the wall

Although I’m not sure I can go so far as to say that I was “lucky” to get out with a broken bone (I was sport climbing on a high quality route – all of the odds had been in my favor and I still wound up on the disabled list), but I will say that the accident could have been far worse.  It just so happened that I was wearing my ankle brace when I fell, just as an extra precaution after tweaking it a little bit at the boulderfield a month prior.  The doctor said that had I not been wearing it I probably would have suffered from a lot of ligament damage in addition to the fracture.  I impacted the rock with just one foot, so I’m sporting just one boot – but just a couple of weeks after my accident, I found out that a friend of mine hit a ledge out at Rumbling Bald and broke bones in BOTH feet.  He’s now laid up with a double dose of hard casts, although thankfully he won’t have to have surgery.

But this post is about helmets, not ankle problems, so let’s get back to the lecture at hand.  Tripping on that rope spun me around wildly – by the time  impacted the wall, I was sideways and completely disoriented.  I had no concept of which end was up, so all thoughts of jumping out and away from the rock and compressing on impact like a good little girl flew right out of my head.  The bottom line is that I didn’t have time to react.  Had there been any large, blocky features in my flight path, my fall could just as easily have been arrested by my head rather than my left foot.  Just because I didn’t “need” my helmet this time doesn’t mean that I won’t another time, so I for one am certainly glad I had it on.

Although I’m of course not happy I got hurt, I’m glad that my reinforcing, eye-opening moment a few weeks ago was due to something as mild as a couple of cracks in my talus bone as opposed to seeing someone I love suffer from an irreversible, life-altering brain injury.  So that’s where I (still) stand.  But at the end of the day, wearing or not wearing a helmet is, like many aspects of climbing (and life for that matter) – a personal choice that can only be made by the one who has to live with the consequences.  I’m certainly not one to judge others for having a different acceptable level of risk than myself.  Please feel free to get a discussion going by sharing where you stand on the issue.  And if you’ve got a cool story, (and you wouldn’t mind winning a free helmet!) check out the “Tales from the Edge” page dedicated to Petzl’s Helmet Campaign and share your story.  Winners will be drawn from new story submissions once every month.

I’ve still got just under 3 weeks left in the boot, so I’m very grateful that my injury was one that I can easily come back from.  But for now, all you able-bodied folk get out there and climb on – and send one for the boot-legged sister glued to the hangboard.  🙂

7 Responses to “PETZL Helmet Campaign – Round 2!”