I’ve known for a week now and it’s been all I can do to contain my excitement, but now that it’s official I can shout it from the roof tops! Somehow I ended up being chosen as one of the 6 members of Trango’s very first team of sponsored athletes!  If I’m being completely honest I’d have to say I’m rather dumbfounded as to why they would choose me, especially when I compare myself to the rest of the team (2 of whom I know personally and have seen firsthand how awesome they are…).  But regardless, I’m gonna run with it and hope I don’t disappoint!  For most climbers Trango is probably a household name (anybody ever used a Cinch before?), but for all the non-climbers out there, here’s a little bit of background for ya.

Trango is a Colorado-based company that has been manufacturing climbing gear since 1991, with a mission to provide innovative design at a fair price.  My first experience with this company was a rather humorous encounter with the founder, Malcolm Daly, back in 2007 at the New River Rendezvous, an annual climber’s festival in West Virginia.  My husband and I were still relatively new climbers, so we had decided to take advantage of one of the many clinics offered at the “Vous.  While we were practicing our gear placing skills, Malcolm happened to walk by and strike up a conversation with us.  We got to talking and ironically had no idea who this guy was except that he was somehow associated with Trango climbing gear.  It took about 30 minutes of geeky gear talk before I finally happened to notice that he was wearing a prosthesis on his right foot.  About an hour later, I was completely floored to see this man tear his way up New Yosemite, a classic 5.9 hand crack that everyone in our group had flailed on earlier in the day.  It was inspiring to say the least, and the perfect way to end our very first New River Rendezvous experience.  We drove home that weekend feeling blessed to be part of the climbing community, and motivated to work harder than ever to improve. 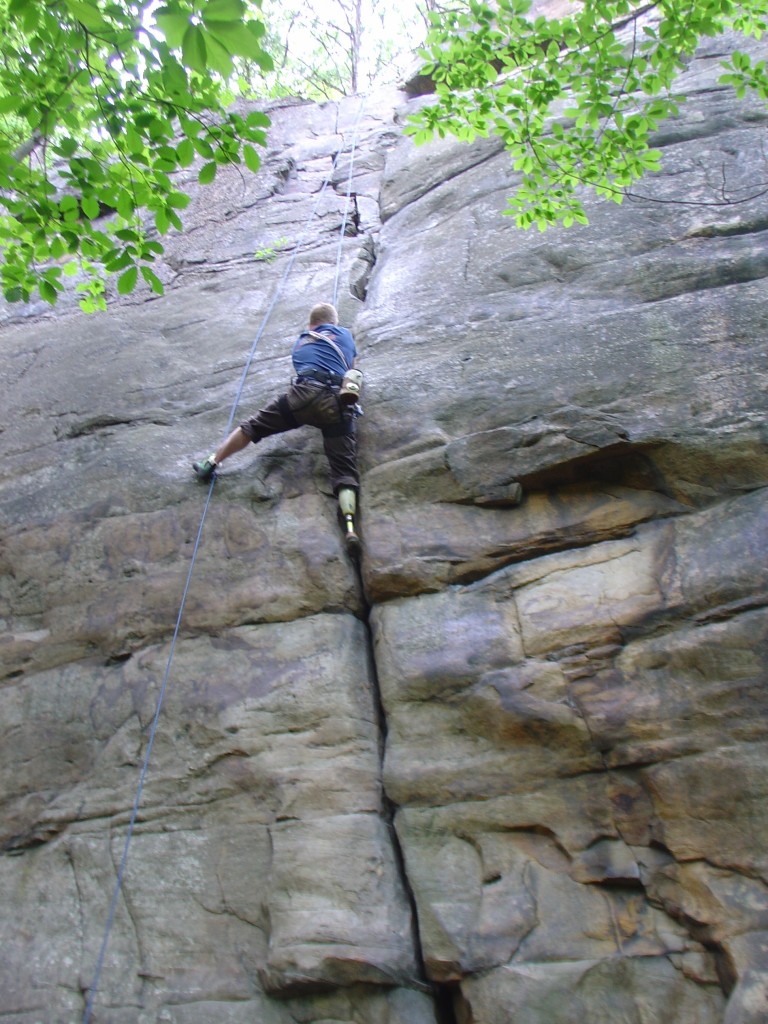 But here’s where the Trango story gets amusing.  Literally the day after we’d gotten back from that weekend, my Mountain Gear catalog arrived in my mailbox.  As I was thumbing through the pages, I did a double take when I saw a climber on a beautiful hand crack, as it had reminded me of our impromptu crack climbing lesson from the day before.  Upon closer inspection, I was shocked to see that the climber had a prosthetic foot, and that the caption referenced “the unstoppable Malcolm Daly.”  I immediately sat down and googled Malcolm, and stumbled upon his story on the Trango website.  I literally laughed out loud when I realized how well-known and respected this jovial, down-to-earth guy was – and that we’d had no clue!  What stuck with me the most was that Malcolm not only took the time to have a personal conversation with us, but that he genuinely seemed to value our opinion with regards to gear, even though we were obviously still relatively inexperienced climbers.

I’ve had my share of ups and downs throughout my journey as a climber (with one of the bigger downs happening just 5 weeks ago), but on more than one occasion, stories of outrageously inspiring people like Malcolm Daly have kept me from wallowing in self-pity for too long.  I am honored to be associated with a company that not only preaches the “don’t give up” message, but also lives and breathes it.  Aside from being a force to be reckoned with when it comes to state-of-the-art climbing equipment, Trango is out to make more than just a profit.  On a national level they are strong supporters of several non-profit organizations such as The Access Fund, The American Alpine Club, and The Hera Foundation.  And on a more personal, local level, they are proud sponsors of just about every climbing event I’ve ever been to – and by sponsor I mean that they do much more than just send gear and swag.  These guys are actually in the trenches at 6 am making coffee and serving breakfast, all with big smiles on their faces!

So needless to say, I couldn’t be more excited about this new opportunity for 2012!  And with just 8 days (but again, who’s counting…) left before I am boot-free, this news couldn’t have come at a more motivating time.  Here’s to an exciting year – a broken ankle may have given me a late start, but I have every intention of making up for lost time!  If you are interested in seeing the other athlete profiles for the Trango team, click here (oh yeah, and be sure to give them a “like” on facebook if you’re a Trango fan!).