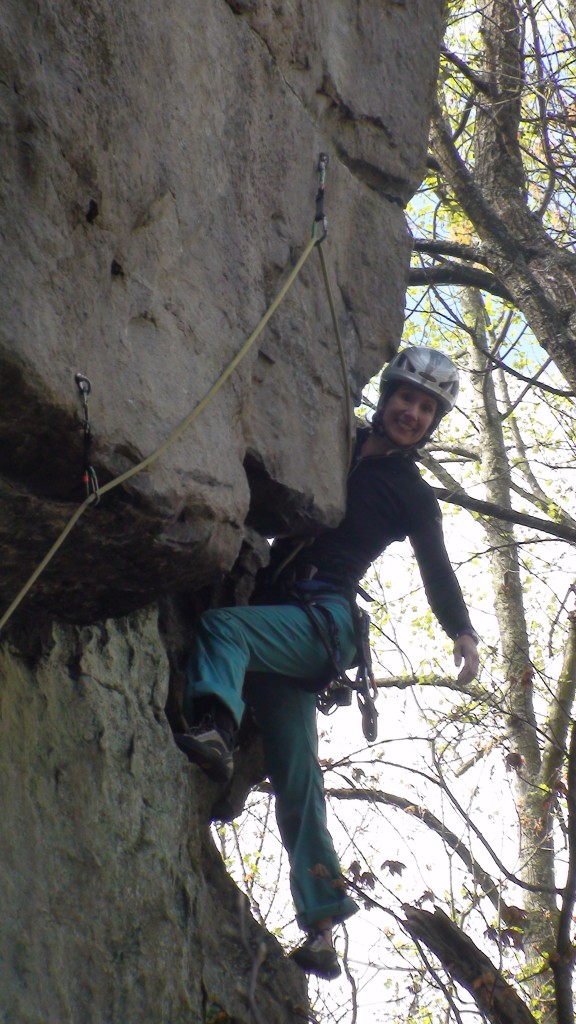 As we packed up our climbing and camping gear as a family on Thursday afternoon, I realized that it had been quite a while since we’d done this.  Our last family camping trip had been at the New last October, our last day multi-day climbing trip had been at the Red just before Thanksgiving, and our last day trip at the crag as a family had been at Hidden Wall 8 weeks prior when I fractured my ankle.  To be honest, I was feeling a bit rusty.  Family Packing Hour used to work like a well-oiled machine – but this time it took 3 times as long to pack, and I had to really sit down and think about what we needed to bring, as opposed to working on auto-pilot.  I was convinced we would leave behind something important (we didn’t), and I got an interesting, yet frazzled glimpse of why other people think we are  crazy for doing what we do on the weekends.  But regardless of the pre-weekend shenanigans, we rolled out of Charlotte at a reasonably early time on Friday bound for our home away from home – the New River Gorge.  Even though we’d had a few concerns that certain activities would be difficult for Cragbaby since it’d been so long  (like going to bed…) he seemed to remember the drill and slept like an angel both nights – so hard in fact, that we actually had to wake him up when breakfast was ready both mornings! 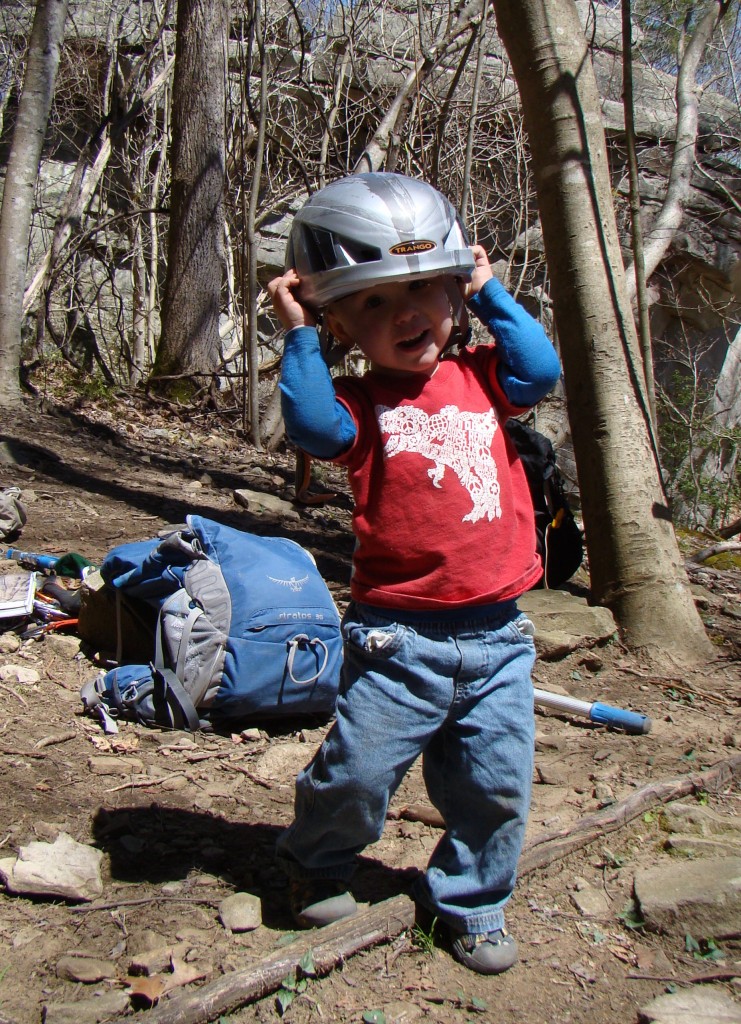 We woke up Saturday morning to a frigid 30 degrees but a cloudless blue sky.  We spent the day at The Other Place, a sub area of The Meadow that has been developed in more recent years.  Here’s what I hopped on:

Day 1
D.D (5.10a) – Hmmm, glad everything got better from here as this was not a good start to the trip.  I guess my head wasn’t ready for a crux right above the 1st bolt…I bailed and then felt stupid after cruising it on toprope.
Hundred Acre Wood (5.9) – Crux was a crazy-for-the-grade undercling move below the (stick-clipped) first bolt.  The rest of the climbing was a straight forward jug haul on slightly overhanging terrain.  I felt much better on this one.
Flaming Pellets (5.11b) – Touted in the guidebook as a 4 star, must do classic, I felt like I owed it to myself to at least try it on lead, especially since the draws were already up, so I put my shoes on and got sprayed down with beta on all sides.  The crux was moving getting past some small incut crimps to a large jug just before the 2nd bolt.  After finagling my feet about 15 times I finally committed to getting my feet up on the crimps and hit the jug.  The rest of the bolts were not as closely spaced as I would have liked, but they were exactly where I felt like I needed them.  After an awkward “rest” and a heady clip at the last bolt, I felt a very brief flash of aggro as I pulled the roof and stood up to clip the anchors.  Flashing this one did wonders for the head, and I was really glad I decided to lead it. 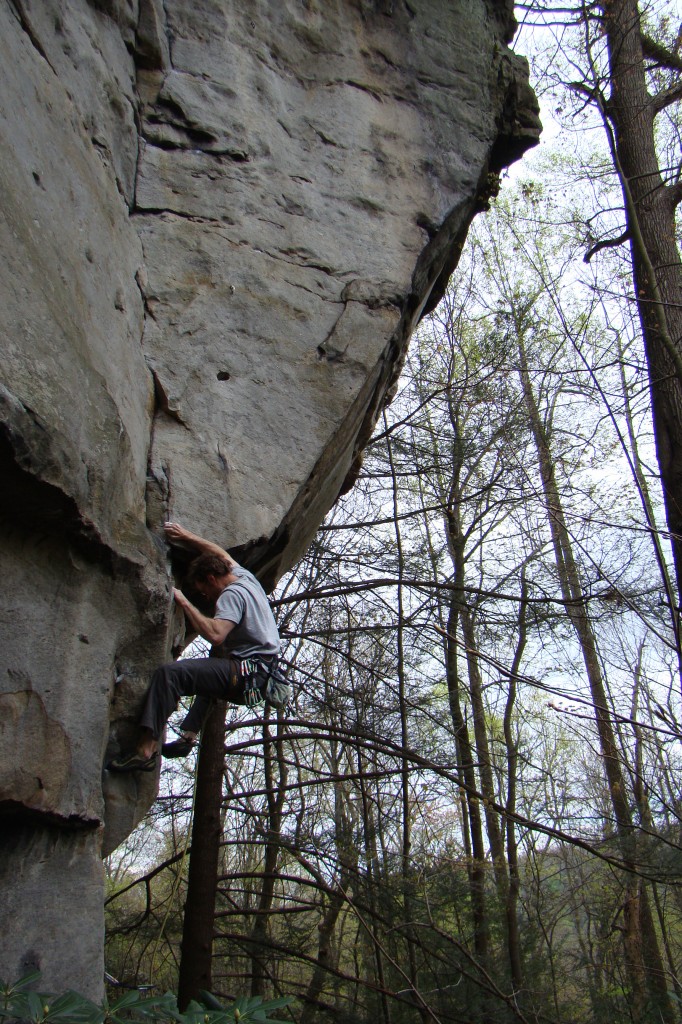 Low Brow (5.12a) – A beautiful line that wandered up a steep sea of slabby eyebrows, this route looked like my kinda 12.  I didn’t really feel like pushing myself on lead at that level so I took the toprope option.  I was clean except for the crux, which was beta-intensive but not all that powerful.  It actually felt way easier than the other 12’s that I’ve sent, so I’d love to come back and tick it when my head is feeling sronger.
Hope Pathology (5.10a) – A fun, technical romp up a vertical face.  Too bad it was so short!
Treeiage (5.10b) – Long jug-jumping moves packed quite a pump for the grade, but the climbing was really fun.  I didn’t get as pumped as expected, so maybe all of my boot-legged campusing is going to pay off.
Makes You Tigger (5.11a) – Almost left without doing this one-move wonder since it was starting to get late, but I’m glad I stayed.  This one had a well-protected but techy crux that was most obviously done with an insanely high left foot smear.  My ankle unfortunately couldn’t flex enough to get in that position (the only time all weekend I felt like I couldn’t do a specific move), but thankfully I had decent enough holds to hang on long enough to figure out another, more cryptic way to get around it.

Our second night was significantly warmer but the morning sky was a little more foreboding.  We actually caught a passing sprinkle at the tail end of breakfast, but fortunately it wasn’t even enough to warrant donning a rain jacket. 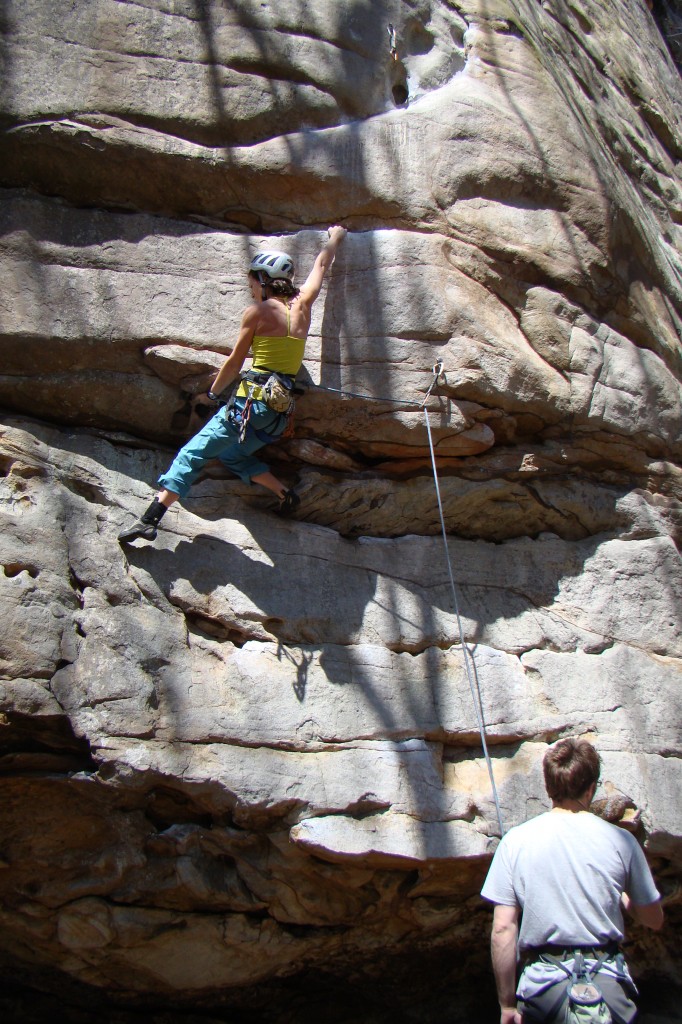 Just before the crux on Flaming Pellets (5.11b)

Day 2
Brain Tweezers (5.10c) – Steve has had his eye on this one for a while, and since it’s one of my favorites, I gladly hung the draws and ticked a few key holds for him.  Although I’ve done this one many times and never had any problems, it’s got a couple of heady sections, so I felt like it was a good mental warm-up as well as physical.
Butta (5.11a) – This one supposedly goes at 11d officially, but the moves off the deck feel way harder than any 11d I’ve ever been on.  I gave the for real start a few half-hearted tries, but pretty quickly went for the also recommended 11a option that involves a couple of tugs on a quickdraw at the start.  The rest of the route had some committed traversing and a lot of exposure at the top.  I was feeling a little shaky in the head, so I hung on almost every bolt, but I got through it.
Brainstorm (5.8) – Since the other routes I wanted to get on were occupied, I decided to hop on this nearby trad line to take some of my new Trango trad gear for a spin.  Other than feeling a little disorganized since not all of the gear has come in yet, I was really happy about how I felt leading on gear.
Disturbance (5.11d) – Noted in the guidebook as possibly the best 11d in the gorge, I took one look at this line and knew I had to get on it, even though it was starting to get late in the day and we had a long ride ahead of us.  I toyed around with the idea of leading it, but I didn’t want to cause an epic if I wanted to bail and couldn’t get the gear back, expecially since there was a really powerful dynamic lunge about halfway up.  I wasn’t clean, but I worked out all the moves pretty quick, and actually nailed the deadpoint on the 2nd try.  Had this been earlier in the day I probably would have pulled the rope afterwards and tried for the redpoint, but I let some self-doubt creep in and set up camp for a while.
MENSA (5.11d) – Last line of the day and I could definitely tell I was tired.  I did all the moves (on toprope), but the crux took a lot of effort, and I felt ridiculously pumped the whole time.  A balancy,  technical line with all decent holds (but not a ton of “great” ones), this one would definitely only go for me if I was fresh AND had it dialed. 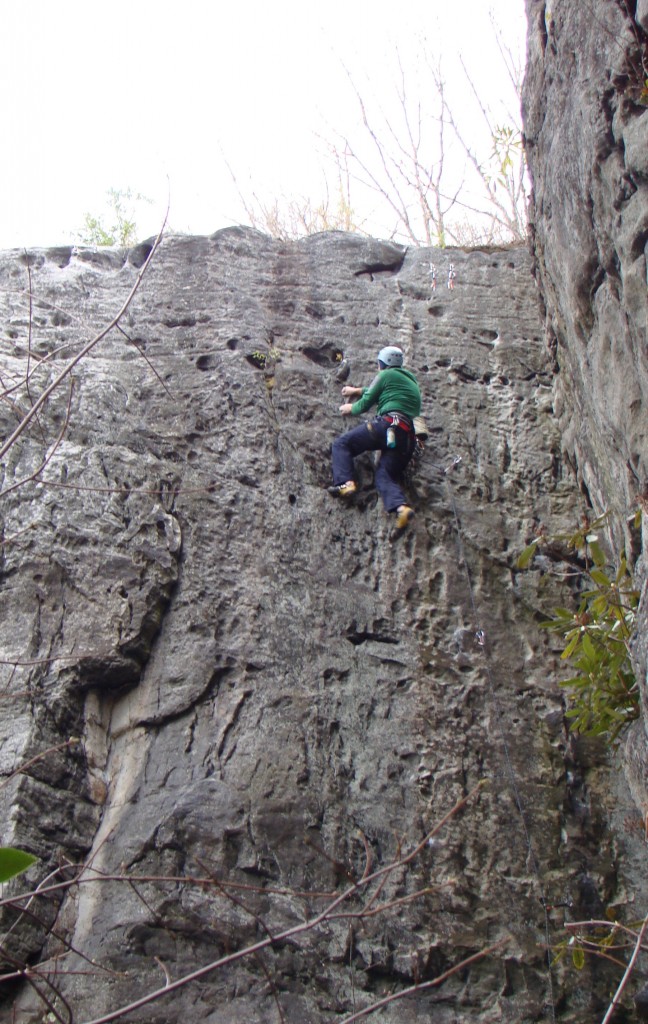 On the way back I did a lot of internal processing, trying to figure out where I was at in my recovery, since I was feeling a bit scattered – fairly strong physically, but pretty weak   mentally.  I had originally gone in to the weekend with no expectations, completely uncertain of whether my brain was going to allow me to lead anything at all, but hoping to be able to lead at least my warm-ups.  But by the end of the weekend I found myself fighting feelings of disappointment that I didn’t pull the rope and try for Disturbance on the sharp end, so obviously there was a mental shift made somewhere along the way.  Statistically speaking, I ended up getting in a dozen routes over the course of 2 days – and 8 of the 12 were on lead.  Of those 8, 6 were flashes, 1 was a redpoint of an old fave, and 1 was a bolt to bolt hangdog that wasn’t pretty.  I was able to work through a fear of getting above my bolt/gear pretty quickly, so long as I was feeling confident on the terrain, even when the moves were pretty committing, so I’m really proud of that progress.  But I also know I still have a long way to go, as the thought of my feet coming anywhere near the wall on a fall makes my stomach turn.  Because of that, I was climbing really inefficiently – slow, overcalculating, and painstakingly methodical.  There’s no way I can expect to send anything anywhere near my limit until I can trust my own abilities enough to get a hint of tenacity back.

But that’ll come back when its ready to I guess.  I keep having to remind myself that even though it seems like its been forever, it’s really only been 8 weeks since the fracture, and I’ve been out of the boot for less than 2 weeks!  When I look at it that way I’m encouraged, but it’s still really frustrating having make up so much ground again.  In the meantime though, our family is going to continue to get out there and enjoy this spring weather!  One thing this weekend showed me was that I had missed the social aspect of climbing weekends just as much as the climbing itself.  Yeah, boot-legging up the wall on a Saturday morning was a good way to pass the time, but it can’t compare with touching real stone, good-natured banter with people I love, and of course a dirty but sweet little Cragbaby that sometimes I think has more fun than anyone else!  Even though my favorite climbing photographer was off gallavanting around the world, we amateurs did manage to get a few decent shots, so if you’re interested in seeing those, click here. 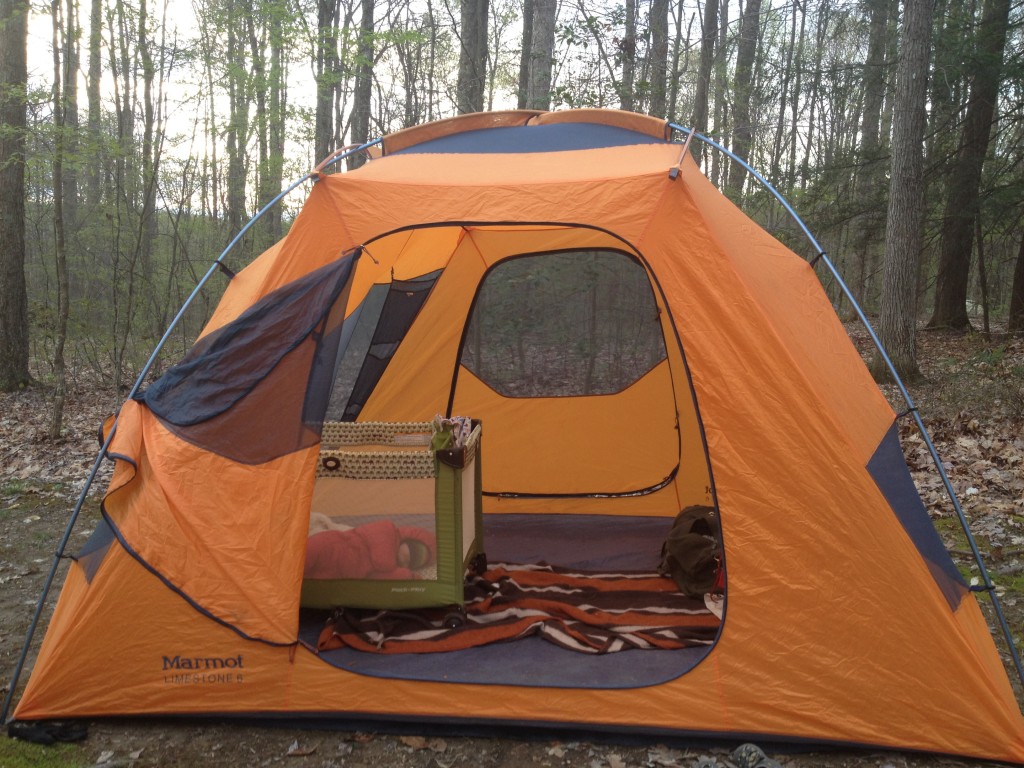 Someone needs their beauty sleep

2 Responses to “A New Season at the New River Gorge”