It started out innocent enough – just Cragbaby and the Mommy at Matthews-Sardis Park (which has been a long time family favorite – more on this park here).  It was a beautiful spring morning, and for the first 30 minutes we had the swings, slides, and tunnels all to ourselves as we listened to a chorus of songbirds equally as excited about the fresh air.  After a while though C’s fascination turned from the playground equipment to the tiny sliver of a creek separating the playground from the surrounding woods.

Like most toddlers, C is enamored by water.  Favorite wet and wild pasttimes include a variety – from poking a stick into the water, splashing and stomping in it, to the ultimate – throwing items into the water and watching them go kerplunk.  On this particular day, the items of choice were rocks and gumballs – you know, those prickly balls that fall from the sweet gum tree and can wreak havoc on a bike trail.  At first he was just tossing the items in.  But eventually he realized that a bigger throw produced a bigger kerplunk.  Then I guess all that throwing to him tired, so C decided to take a load off…right in the middle, which made for the biggest kerplunk yet!  After resting long enough to soak through his diaper entirely, C decided that he’d had enough of the creek and took to the trails.  I could only smile as I trailed behind my little explorer, hobbling after him as fast as I could (at this point I still had my boot on) while he stopped every few feet to touch the moss and exclaim, “SOFT, Mommy!” 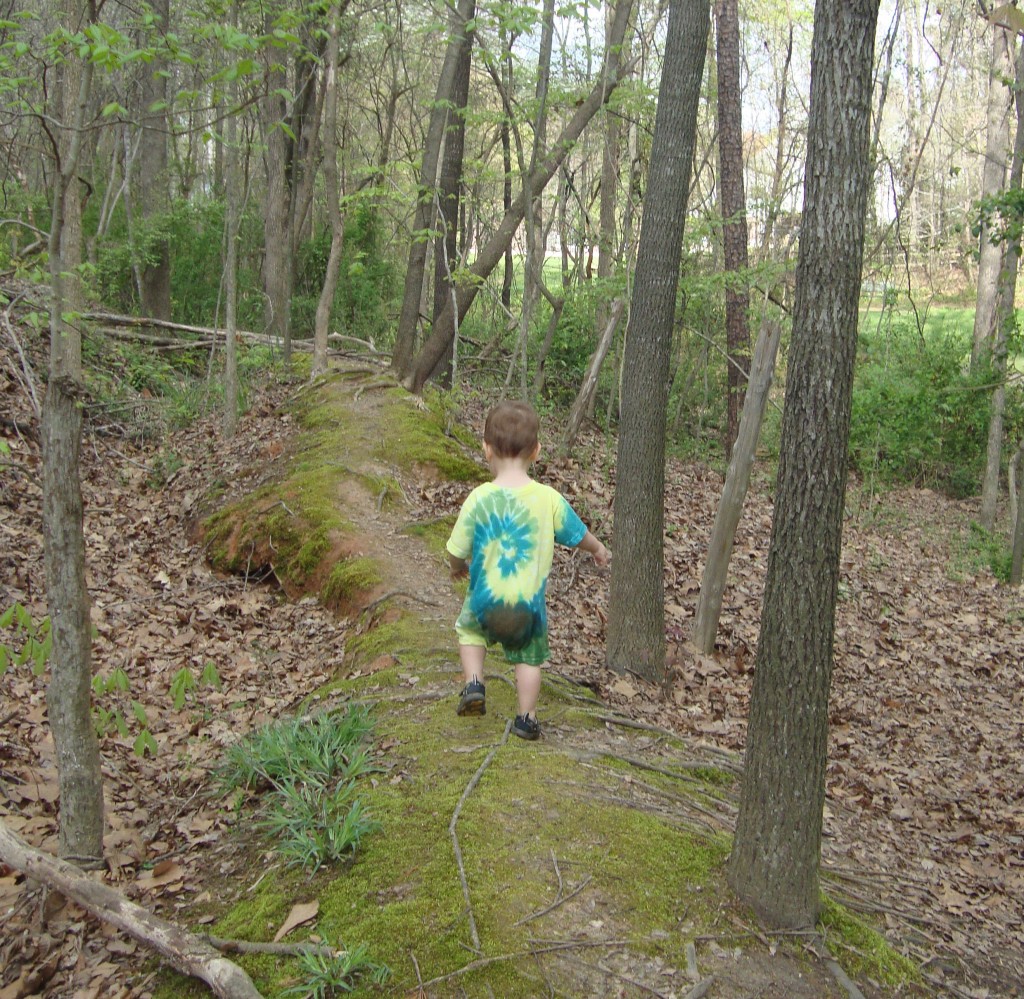 By the time we were done with our mini-excursion and made it back to the playground area several more families had shown up to get a dose of sunshine.  As we performed our ending ritual of waving and saying good-bye to every piece of equipment on our way back to the car, I pretended not to notice the disapproving glances of the other (clean) mommies of children that weren’t wearing tie-dyed onesies caked in mud around the bottom.  I realized that most of those kids weren’t going to get a chance to get wet and dirty that day.  Some for probably good enough reasons – getting half submerged  in a creek probably isn’t the best idea if you are planning on stopping by the coffee shop on your way home, or if you just had the inside of your car detailed.  But I think a lot of times it comes down to the fact that it’s easier to just say no to things like creeks, puddles, and mud than to deal with the inevitable post-play messiness.  On days that I’m not up for it, I of course steer C away from potential disaster zones.  But I want to make sure that he has plenty of time to enjoy just being a kid and getting as messy as he possibly can – it may take twice as long to clean-up as it does to get dirty, but the ecstatic toddler giggles make it all worthwhile!  What’s everyone else’s stance on the messies?  God made dirt, so dirt don’t hurt?  Or cleanliness is next to godliness?

10 Responses to “Cragbaby the Dirty Hippie”