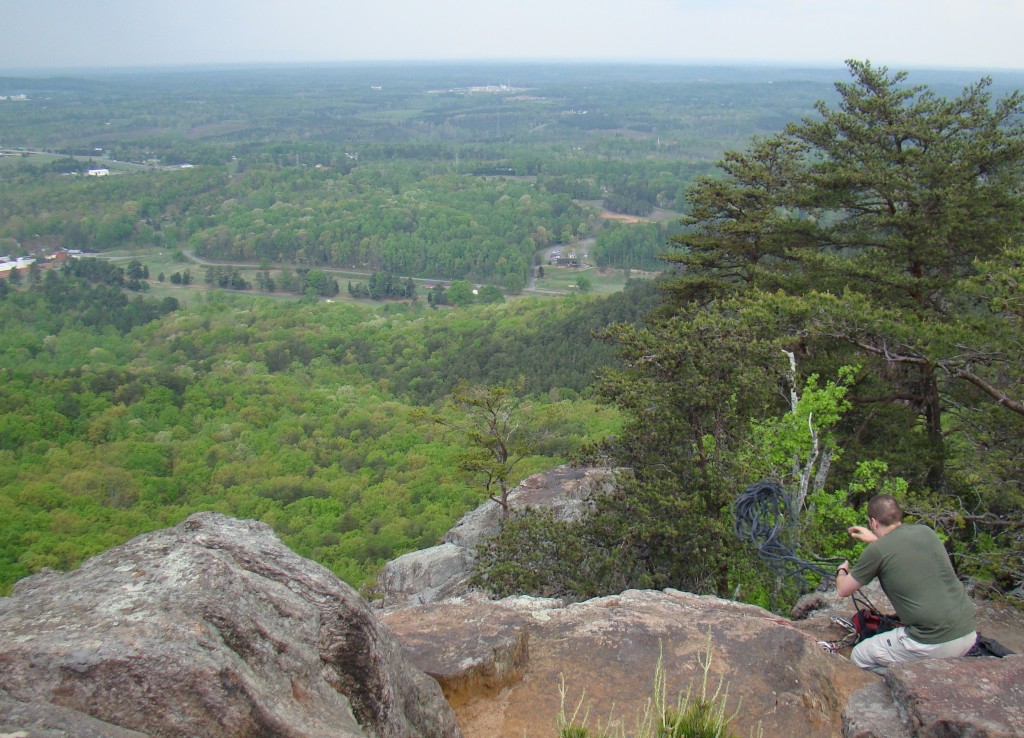 A beautiful day in the Piedmont

Well, it’s been quite a while since my last guidebook update, but rest assured it’s not from lack of progress.  Since a fractured talus and a walking cast put my vertical research on hold for a while, I’ve chained myself to my computer the minute Cragbaby falls asleep, fervently finishing up route descriptions and working in all of the creative anecdotes so many folks have been so kind as to send/tell me.  But there’s only so much work I can do without actually touching the rock, so as soon as my doctor officially de-booted me I hit the ground running…well, not actually for real running, it’ll be another 3 weeks before I’m (hopefully) cleared to do that.  After rain thwarted our original Saturday plans, we set our sights on Monday – Steve took the day off and C’s grandparents came up to watch him for the day (thanks GaGa and Paw Paw!).  I not only got a partner willing to spend a large part of the day scrambling and exploring rather than climbing, but also one that was willing to be patient with me if my ankle wasn’t ready and we needed to cut the day short. 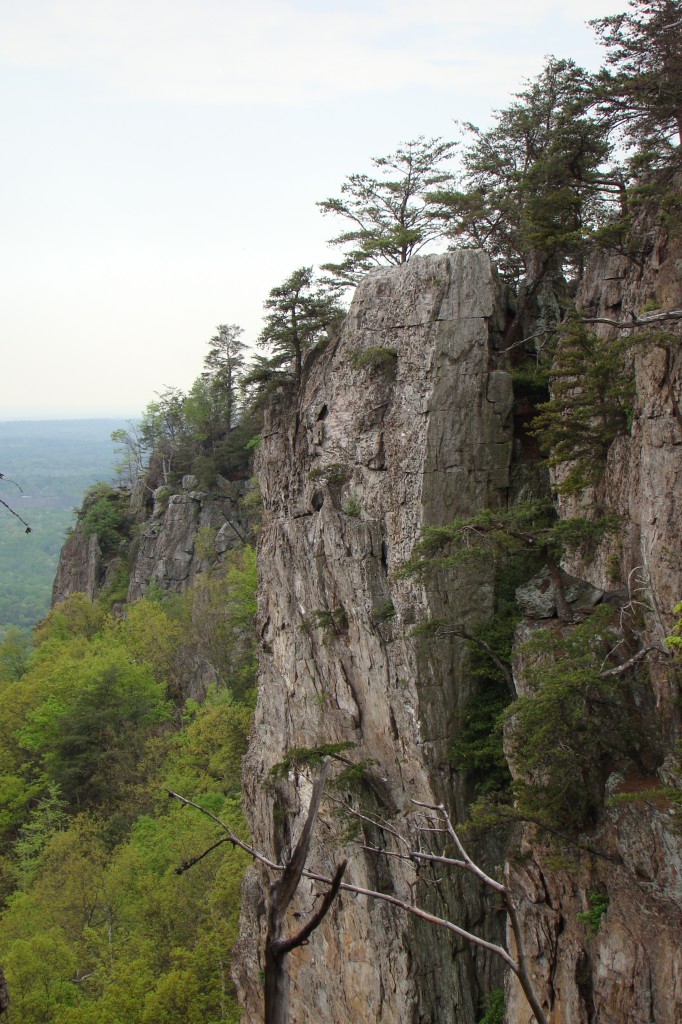 Nice angle of Pink Flamingoes (too bad there's no climber on it...). It's the face just right of the sharp arete, on the left side of the chimney.

With three successful gym days under my belt, I was more worried about the hike in on steep, uneven, terrain with a pack on than the actual climbing.  Thankfully, my sweet husband carried all the heavy stuff.  I was pleasantly surprised with how good the ankle felt – We probably did 3 times the amount of scrambling than we would on a normal crag day, and my ankle got through it all with only a very minor amount of complaining, and even that wasn’t until the last 20 minutes of the day, on the steep, downhill jaunt back to the car.

We attempted to warm-up at the Gumbies Roof area, but with the stray rain shower and chilly wind, it was anything but that.  It wasn’t a total loss though.  I was able to take some cliff pictures and confirm all of my route descriptions for those route as well as the whole Fortress Area.  Next we headed over to David’s Castle, all the while taking notes on the best way to provide directions to each of the jumbled buttresses along the summit ridge.  We toproped 2 seldom climbed lines, as well as a classic that we’d never done before – Pink Flamingoes (5.11a), Temporary Tradition (5.11a), and Instant Karma Direct (5.10d).  Pink Flamingoes is a delightful little number that follows the left side of a gully/chimney type feature on the right side of David’s Castle.  I stayed on the face in keeping with the original line, and Steve gave the arete variation a try, which ended up being a good deal easier (5.10a), though the rock quality is not as good.  Temporary Tradtion was really just a hard boulder problem off the deck followed by 5.8 climbing.  I’d gotten the skinny from First Ascensionist Mark Pell on both of these routes just a few days prior, so it was really cool to climb these routes with all of the history behind them fresh in my mind. 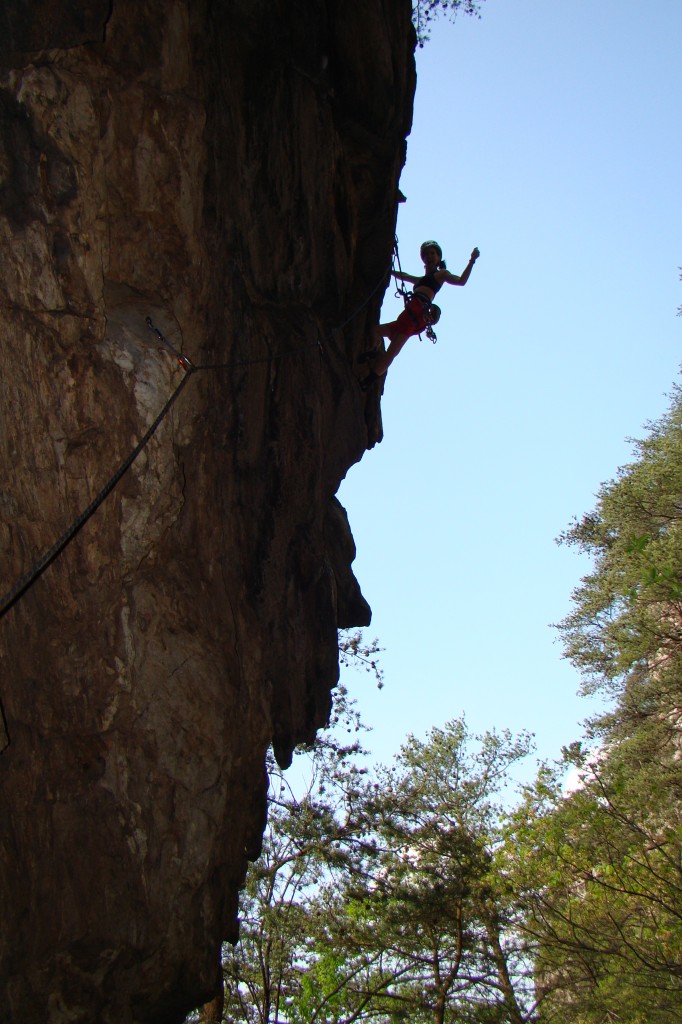 Topping out on Smoke Signals (5.10c/d), in the dark recesses of the Car Wall

After more photos and another round of route confirmations all along David’s Castle, we headed back up to the summit ridge and ventured over to the Two-Pitch Wall.  We didn’t climb anything there, but we located all of the routes and took photos.  Our final destination was the Car Wall, a small, secluded wall that rarely sees the sun.  The right side of this wall is probably the most continuously steep rock that I’ve seen at Crowder’s, and several of the lines looked really good.  We wanted to climb more, but were running out of time at that point, so we opted for the lone sport route on the wall, knowing that would be the quickest option.  Even though it put us back a little later, I’m so glad we stayed, as it was the perfect way to end the day, on so many different levels.  First of all, I’m gonna go out on a limb and say that Smoke Signals (5.10c/d) may very well be the best 5.10 at Crowder’s.  It’s a shame that the Car Wall is such a pain to get to, otherwise I’m sure it would see non-stop action every weekend!  As it is though, this line is definitely worth the extra shenanigans required to get to it.

Secondly, I’ve learned that anytime coming back after a nasty fall ultimately ends up being more of a mental than a physical battle, and this line definitely went a long way towards getting my head game back.  I had been hoping to lead something on this outing, but the routes we needed to check out for the guidebook didn’t really lend themselves well for someone who was still supposed to be “proceeding with caution” with regards to climbing (ie, trad routes that most people nowadays mostly toprope due to suspect rock and small, tenuous gear placements…).  Hopping on something familiar would have made sense, but not in the context of today’s outing being in the name of guidebook research.  Since I’ve been on almost all of the bolted routes in the Main Area, options for safe leads were slim pickings, until we took a gander at Smoke Signals.  Ridiculously steep (read: clean, safe falls), and at a grade that I shouldn’t have too much trouble with, this line was just what I was looking for.  I’m not gonna lie – I was definitely scared making moves above the bolts, even though I knew there wasn’t a chance I’d hit anything…and my right arm got ridiculously pumped from dilly-dallying too long in one spot working up the nerve to commit to a couple of moves, but I managed to hang on for the onsight.  It may not have been pretty, but I’ll gladly take it.  Baby steps I guess.

So as far as where things stand, it seems like as soon as I cross something off the guidebook list, 2 more items get tacked on, but I’m getting there.  Except for a few edits here and there, I’m basically done with all of the route descriptions save a few punchlist type items for each crag.  The hard part is going to be finding the time to get to each place (preferably sans C…) to get everything done.  I’m still in the market for stories and especially pictures, so if you’ve got any/and/or/both to offer, please drop me a line!