Considering our history with rainy weekends and the New River Gorge, we are all too aware of how fickle spring weather can be – so another weekend of sunny ad 70’s was too tempting to pass up, even though we were just there last weekend!  It also didn’t hurt that our family has been in real rock withdrawal over the past 6 weeks due to me and that ugly black boot (which is currently perched high upon a shelf in the garage, hopefully to never be resurrected again!)  So once again, we loaded up the car (this time we weren’t as rusty!), and hit the road on Friday afternoon, ready for a weekend of sun, fun, and of course serious sendage!

We spent Day 1 back at The Meadow, since several members of our crew had some unfinished business to take care of leftover from the week before… 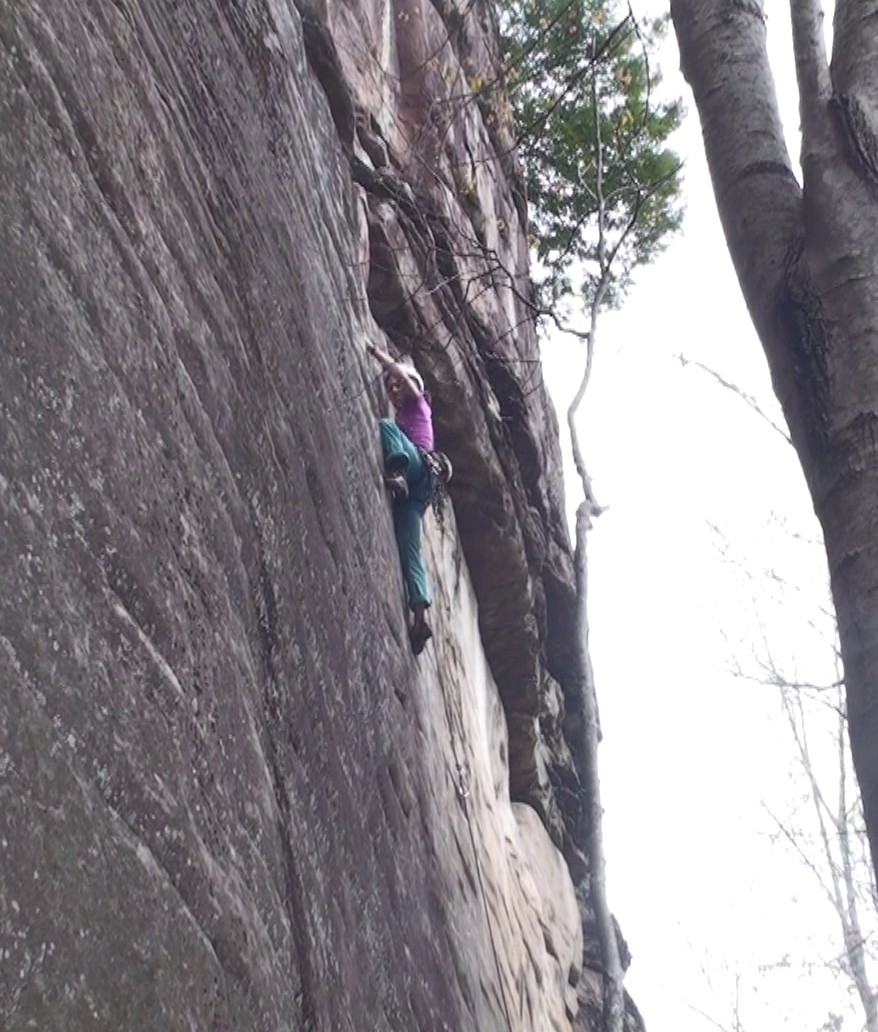 Tiptoeing through the crux of Low Brow (5.12a)

Rosetta Stone 5.10a
Low Brow 5.12a – This was my major goal for the weekend, and I delighted at how quickly it went down!  Last week I took a toprope lap up this one and was surprised at how doable it had felt.  I mentioned that I would “love to come back and tick it when my head is feeling stronger.”  After realizing that at least one person in our group had fallen at almost every bolt last time without so much as a scrape, I decided there was no time like the present.  In my head, I had imagined that it would play out like this – a bolt to bolt run to hang the draws and remember my beta, another attempt to come close but fall at the crux, and then finally a successful third attempt where I would manage to desperately hang on by the skin of my teeth.  On my initial run however, I was shocked that I made it all the way across the steep slab, made the tenuous 6th clip without even flinching, and snagged the nice crimper that signified the end of the crux sequence.  The crowd went wild.  I had one more long move to a large, flat shelf, and then it was smooth sailing in gently overhanging 5.10 land for the last 30 feet, with a no hands rest 10 feet before the anchors.  I repositioned my feet and locked off, reaching my left hand up as high as I could…2 inches short.  I switched hands on the crimper and tried to reach the shelf from a different angle with the other hand…not even close.  I switched hands again and decided to do what I did the first time, but this time instead of reaching up statically, just do a quick pop for it…I barely scraped the slightly rounded edge of the shelf and all of a sudden my foot slipped and I was off.  I screamed really loudly as I dropped 15 feet, and before I even came to a nice, soft, comfy stop on the rope, I realized that everything was fine and felt rather embarassed for scaring every one down below with my melodramatic shriek.  I jugged back up to my high clipped bolt, and did the crux again, this time even easier because I found better feet.  Speaking of better feet, I also found one that wouldn’t pop when I made the big move to the shelf.  The last section was still a little heady as there is a bit of space between the bolts, but I got through with no problems, and ticked several holds while I was being lowered so that I would remember my sequence. 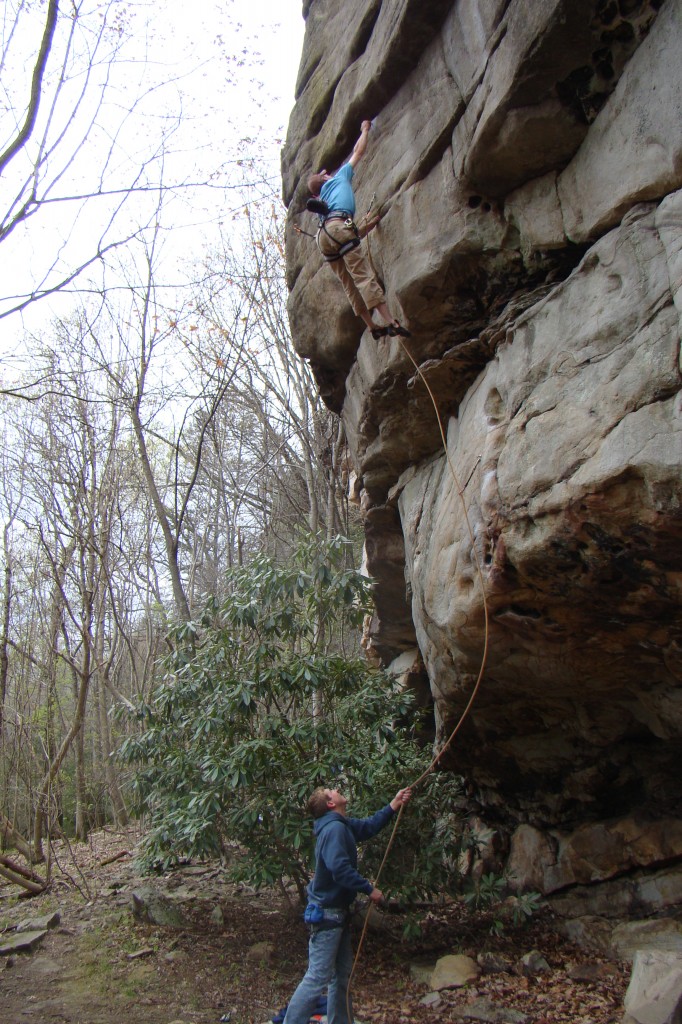 Sam going big on the dyno on MacCauley's Irish Stout (5.12b)

After a quick lunch break I pulled the rope and tackled the line again.  My visions of an epic, desperate barely-there send were shattered – I felt balanced and strong, and my mind felt focused and quiet.  I made it through the crux again, set my feet just right, and popped up to the shelf …got it!  I moved up to a giant jug and shook out a bit so I could calm myself down a bit, since I could feel myself getting excited about the potential send and I didn’t want too much adrenaline to cause me to rush through the finish and blow it.  When I finally clipped the anchors, I was a little disappointed that there was no cheering.  Not even so much as a “Nice job!” from my belayer…or my husband, even!  It made me question the validity of my send – maybe they all thought I had pulled on a draw or stepped on a bolt or something?  As it turns out, everyone had been under strict “no shouting” orders from Steve, since Cragbaby was fast asleep under a rhododendron a few feet from the base of the climb.

Unknown 5.10c – A few interesting moves, but overall not that great of a line, with a reachy, hard to decipher crux up high.
Disco 5.11a – Now THIS one was fun!  Just 3 lines over from Low Brow, but on rock that not only had a completely different character, but also looked entirely different!  This one had a little bit of everything – a bouldery start to a committing mantle, thin face climbing, with a pumpy and exciting finish.  Felt pretty sustained and difficult for 11a, and I was happy to get the flash.
MacCauley’s Irish Stout 5.12b – It was the end of the day and the rope was up, so I figured why not take a toprope lap?  Yikes this was hard!  A funky boulder problem through a series of huecos, then long moves between large, flat holds.  The crux is a dyno, which I gave 2 half-hearted end-of-day tries before pulling on the draw and continuing on.  Not only am I horrible at dynos, but my tummy was telling me it was time to hike out and make for Diogi’s before Cragbaby got cranky! 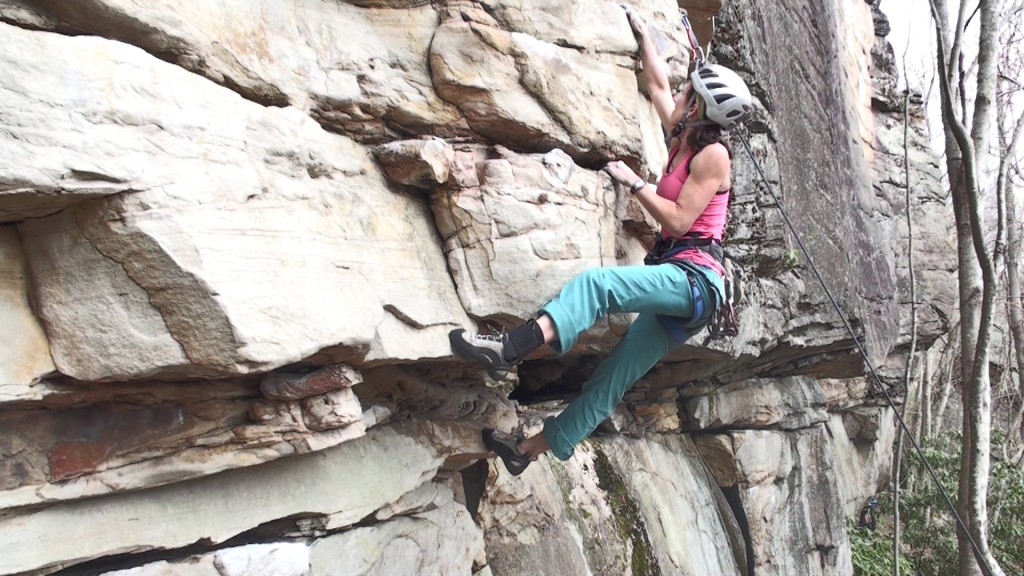 After stuffing ourselves with way too much Mexican food, we went back to camp, laid on our backs on our picnic table, and had a rather humorous time watching the stars come out of hiding – humorous because C easily “saw” three times as many stars as we did…constantly pointing excitedly and exclaiming, “Another star, another star!”  Eventually he mellowed into a glazed over stare, and we all headed back into our tent.  I awoke the next morning to the birds singing, where I quickly noticed that C was staring at me.  When I made eye contact it quickly turned into a game of peek-a-boo under our sleeping bags – a good start to the day, in my opinion!  Day 2 was spent at Fern Buttress. 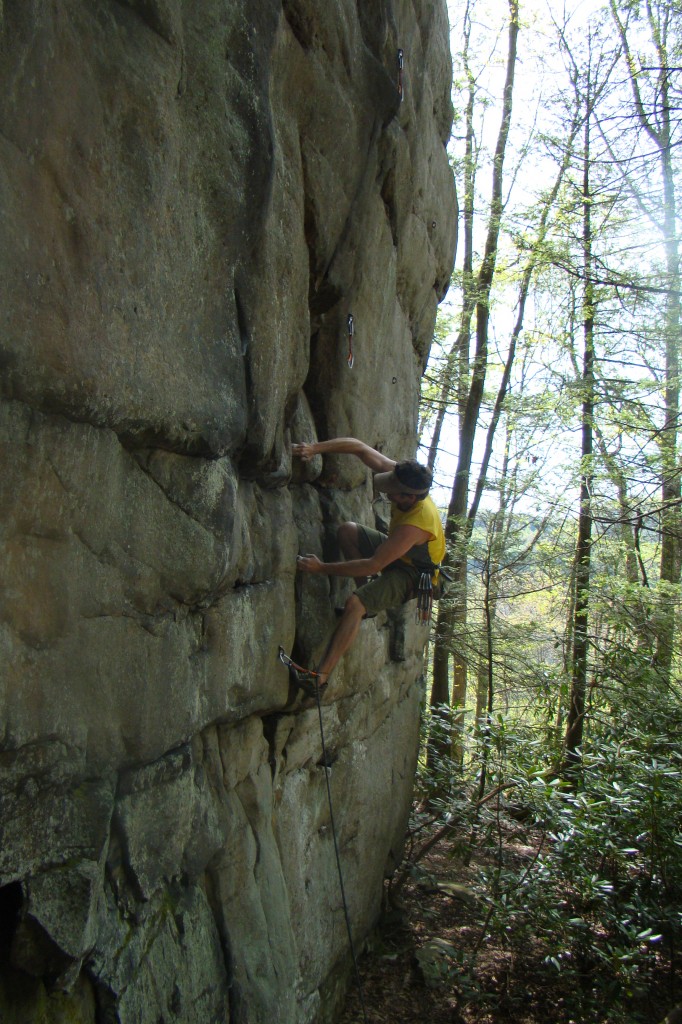 Bennett getting started on (5.11d)

Chameleon 5.10b – Definitely though-provoking for the grade, this was on Steve’s tick list and I was hyped for him to send it.
Wild Seed 5.11a – Definitely a classic, I’d been on this once before, on our very first trip to the New with C, when he was 10 weeks old.  I one hung it then, and I was pleasantly surprised at how easy it felt this time around.  A few heady traversing moves down low to a cool hueco, then a couple of hard pulls on some crimpers lead to a rewarding jug haul finish.
Muscle Belly 5.11c – This one was personally frustrating for me, not because I climbed it poorly, but because I let self-doubt creep in and opted for the toprope based on what others were saying about the route.  I then toproped it clean without any problems, which bummed me out that I hadn’t led it.  This overhanging arete was ironically technical and balancy, on plated patina that was flaky enough to keep things exciting.  Due to the reach-around nature of some of the clips, this is definitely one that would be a good deal easier with the draws already hung.
Mega-jug 5.11b – I kept expecting to sink my hands into something huge and sinker, but the namesake hold evaded me.  This was a fun route, however, and far from my normal technical face climbing modus operandi.  Sustained movement on decent, flat holds to a definitive crux using tiny, plated crimps to pull a bulge.
Spiderwalk 5.10c – Sam wanted to do this one, so I volunteered for clean up duty.  A beautiful line up a tall face that felt pretty cruiser until the very last bit.
First Person 5.10c – The guidebook makes mention of a tenuos 3rd clip.  We all agreed that must have been a typo, as no one had any qualms about that clip, but everyone of us foundthe 4th clip from precarious laybacks on insecure feet to be rather exciting.  A spicy way to end the weekend for sure.

It’s unbelievable the difference a week can make!  Last week I felt like my sharp end climbing was overly methodical, timid, and painstakingly calculated – whereas this time around I had no trouble committing to crux moves and dealt with very little hesitation due to fear.   I’m not entirely sure exactly what sparked such a dramatic change, but I’ll take it!  Although I still don’t think I’m quite functioning at full-capacity yet (for instance I shudder at the thought of stuffing my bad foot inside a crack while fishing around for gear), I’m definitely encouraged by how quickly everything is coming back.  This whole ordeal has definitely been a learning experience for me, and while this post is already long enough, I plan to delve into that more deeply in an upcoming post.