Every now and then a route deserves to be memorialized by a post all to itself. In the case of Heresy (5.11c) out at the Obed, it was because of my first impression of it when I first laid eyes on it, several years before I was strong enough to even think about sending it. With Dave the Dude (5.11d), it was because the line was just that good – not only was it a classic in every sense of the word, but it was a culminating finale to a fantastic trip in the Red River Gorge, and thinking about it still brings a smile to my face. But Slabster’s Lament is different. It’s true that the first time I got on it I was pretty intimidated and the thought of ever tackling it on the sharp end seemed like a joke, and its also true that it’s one of the best lines at Hidden Wall…but to me, it will always and forever stand out because of my personal journey with it. 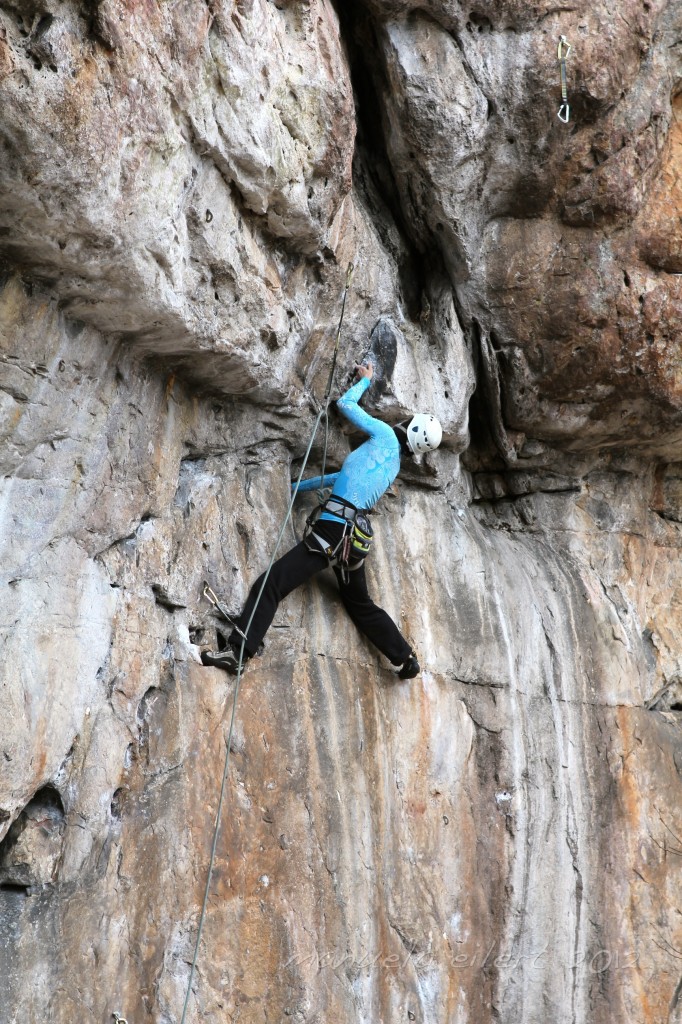 The first tricky move on the route, dubbed “the block move” by our crew.

My first experience with this line was in May of 2011, and I was far from being called a worthy opponent. I marched in to the the crag that day filled with excitement and optimism. I left feeling (and looking) like I’d been in a bar fight. Not to make sweeping generalizations about gender, but I’m a girl…and I climb like one. Like the name may imply, Slabster’s Lament is anything but a “girly” route.

It starts off fairly mellow – interesting traversing moves along some funky little pockets on thin feet. A tricky move around a block deposits you at the crux, which you’d better be ready for, since working through individual moves on the route, whether it be on lead or toprope, is almost more trouble than its worth due to the awkwardness of getting back on and established on the wall. The crux involves pulling up, into, and around a large and desperately sloping left-facing flake. The finish is on overhanging pockets with hard-to-see feet, with one final big move to a deep, incut undercling/sidepull feature. The climbing is scrappy, burly, and a far cry from the thin, delicate, technical faces I usually prefer. My first time on the route was an outright flail fest. I wasn’t anywhere close to doing all the moves without some major toprope assistance – in fact, when I looked back through my climbing log, I noticed that I had written this: “To lead this would have been terrifying…I’m nowhere close to that level.”

The next few times I made it out to Hidden Wall I avoided Slabster’s like the plague, but on a stray weekday in January, the rope was already up, so I decided to give it a few whirls. Definitely not clean, but decidedly less thrashy – still needed a lot of refining, but was well within my range to lead it.

Just a couple of weeks later we were back out, this time on a sunny Saturday in mid-February with a whole posse of people. My first time leading the route was a heartbreaker. I reached up to grab the final hold and literally missed by about half an inch. I took a nice long (clean) fall. Surprised I’d come so close, I felt confident that I’d send it later on in the day. Unfortunately for me, (as well as my poor belayer that had to carry me out across his back), my next attempt ended with a fall at the exact same spot – but this time my foot clipped the belayer’s side of the rope on the way down. I helicoptered around and bashed my left foot into the wall, fracturing my talus bone in two places, along with a decent sprain. 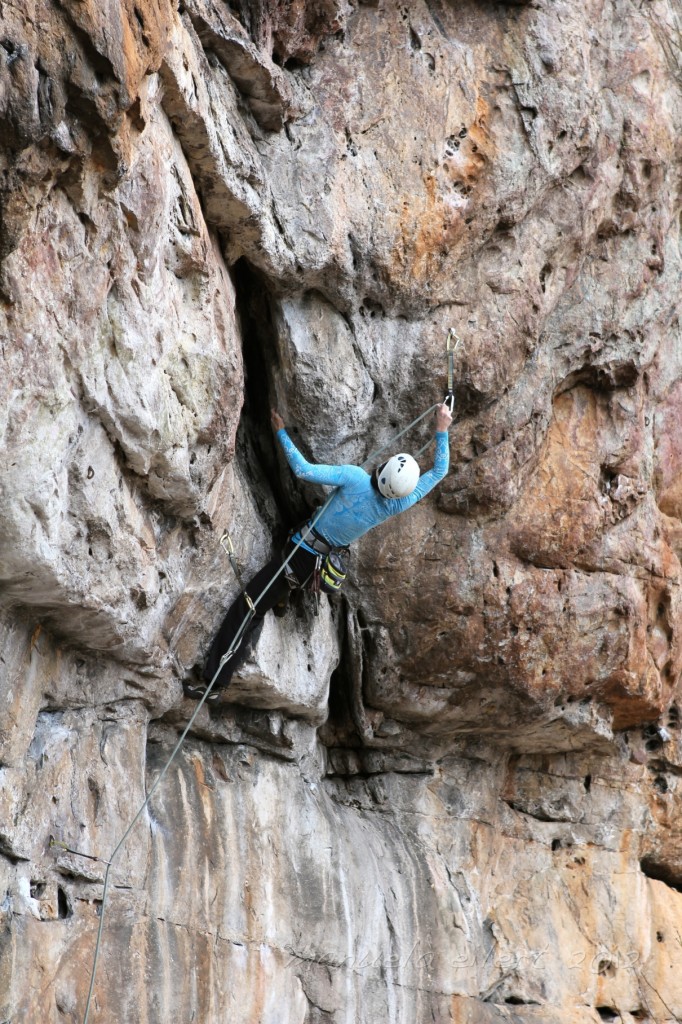 Knee bar clip at the crux

Most of my regular readers are probably well aware of the boot saga that ensued for the next 6 weeks, although thankfully when I look back now, its nothing more than a blur of hangboards, pull-ups, and one really sweaty foot. I can’t tell you how many times I relived that last move, wondering if I somehow could have summoned an ounce more of strength to latch that last hold, and then I wouldn’t have ended up in this mess. Although I can say that it was a learning experience that did have some positives come from it, I definitely came away feeling like I had some unfinished business with Slabster’s Lament.

10 weeks after the injury, I’d been out of the boot for a month and my ankle was holding up quite well. With a couple of trips to the New under my belt, my lead head was starting to feel back to normal, so we decided to get back to Hidden Wall so that I could try and slay a few mental demons. The original fall had happened due to the fact that the section of rope between the 3rd and 4th bolts is in an awkward spot in relation to the body position of the climber. What happened to me was kind of freak and 100 more people could easily take the same fall without the same result. However, for me personally, taking that chance again was ridiculous, so I took a double-rope approach to mitigate the risk. On paper the theory was solid, and in practice it worked, but I obviously was not ready. Despite top-roping it clean, I wasn’t able to rally much of an attempt on lead, probably due to the fact that I was timid and hesitating so much on every move that I had no gas left in the tank when it came time for the crux. It was pretty disappointing to drag up all of that emotion from the injury and still walk away empty-handed – but at least I walked away on my own two feet this time. The saga continued.

Fast forward 5 days later, to Thursday of the same week. My friend Bennett has had a few schedule changes as of late, and ended up with Thursday off, which also happens to coincide with hubby’s work-from-home day, so it was the perfect opportunity for one more shot at redemption, before the heat and humidity settled in, sucking all the friction out of the crux undercling and leaving it unmanageably manky. I was cautiously optimistic, but afraid to get my hopes up too high.

I’m not really sure what happened in only a matter of 5 days, but there is no comparison between how it felt compared to the weekend before. After a smooth toprope warm-up, I pulled the rope and sent. No cameras, no cheering, no fanfare. I felt calm, focused, and not at all hesitant – to be honest it went so well it was almost anti-climactic. But regardless of how it went down…Slabster’s Lament is officially checked off the tick list, and I feel like I can move on, hopefully to better and brighter things. 🙂