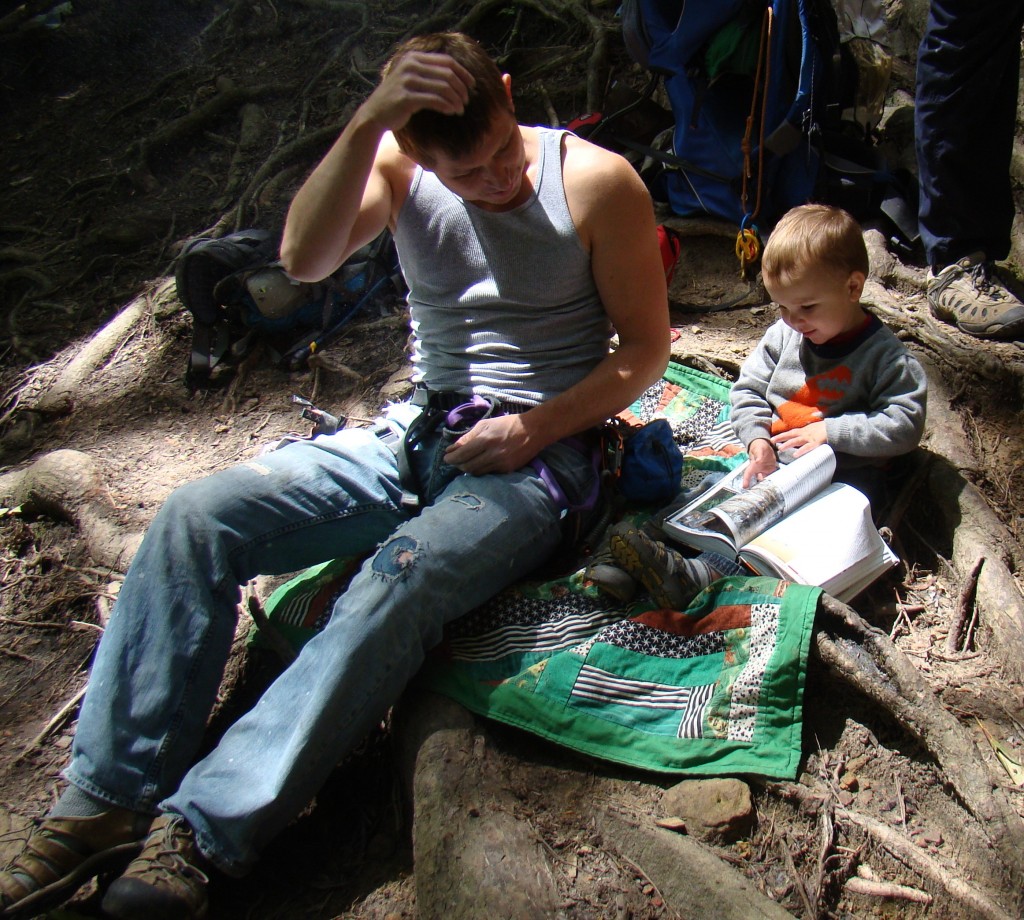 Cragbaby and Caleb planning out the day's routes

The build-up to this weekend at the New was admittedly a bit chaotic.  But despite last-minute partner bailing, a forgotten ankle brace, and a moody weather forecast, this Mother’s Day ended up being the best yet!  I had two goals in mind – to send as many hard .11’s as I could, and to get redemption on a 5.12 project from last summer…

Day 1 Routes (Butcher’s Branch and Seven-Eleven Wall):
The Greenpiece (5.10b):  I’d only been to Butcher’s Branch one other time, and it was almost exactly 4 years ago.  I remember having an epic almost-onsight of this route that ended with a pumped-out heartbreaker at the anchors.  It felt good to come back and tick this one on my warm-up lap. 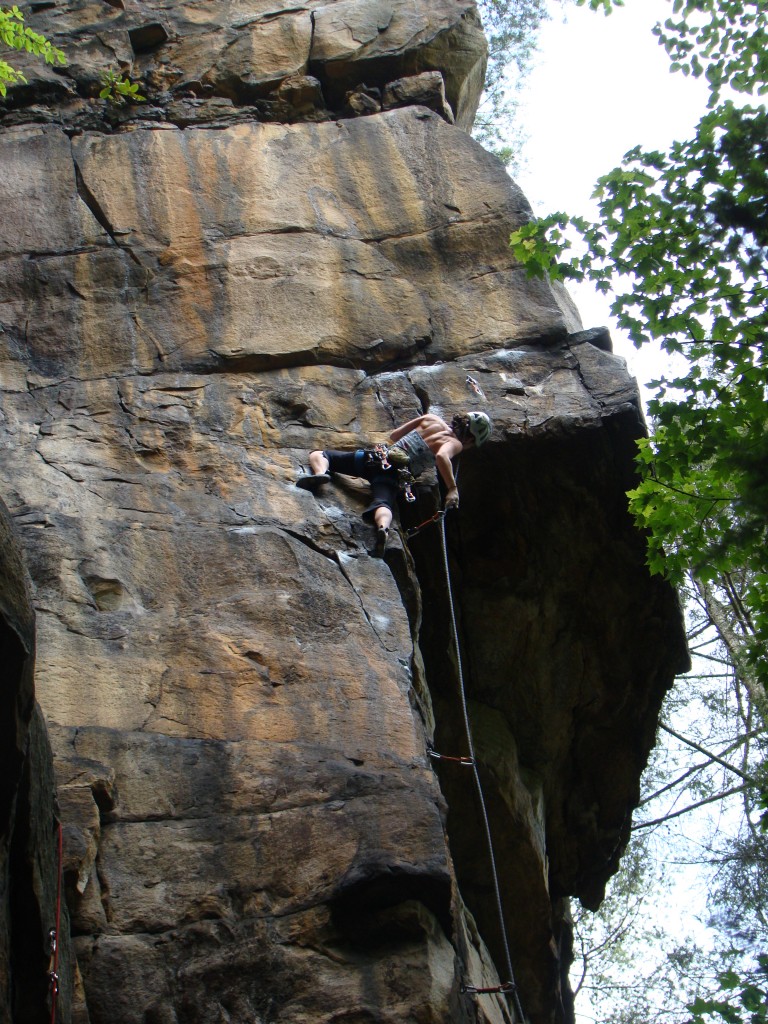 Sancho Belige (5.11c): Wow, speaking of pump fests…the first half of this gently overhanging route was loaded with big moves from sloper to sloper, with a hard clip just before the crux.  The crux was a stand-up move off of an out of place half-pad crimp.  There was a nice rest stance a bit above the crux, then a few more long moves and another hard clip.  My first go came with a fall at the crux, a hang on one of the upper bolts, and a flash-pump like you wouldn’t believe.  I debated pulling the rope, because I didn’t want to go through all the energy of climbing it again when I wasn’t sure I could send it.  But I’m so glad I did – because on my next go I cruised it.  Lesson learned?  Don’t underestimate the energy-saving powers a redpoint run has over an onsight attempt.
Scenic Adult (5.11c):   This is one of the best routes I’ve ever been on – tall, exposed, and ridiculously intimidating from the ground.  It began with technical climbing using both sides of a beautiful, sharp, arete for about 70 feet, then launched into a long, pumpy crux sequence with a really hard to reach clip and a funky rock on move across an overhang.  The terrain is a bit easier the rest of the way, but not without a few heady moves here and there to make sure you’re still awake.  The first time I was way too gassed trying to make the crux clip, and slumped onto the rope as soon as the rope went in.  The rest of the climb went well, so I thought for sure I could send it my next go, but that darn pump clock started ticking in my ear too loudly and I rushed my footwork at the crux and popped off.  Oh well.  I didn’t send it, but a classic line like this is definitely worth a revisit. 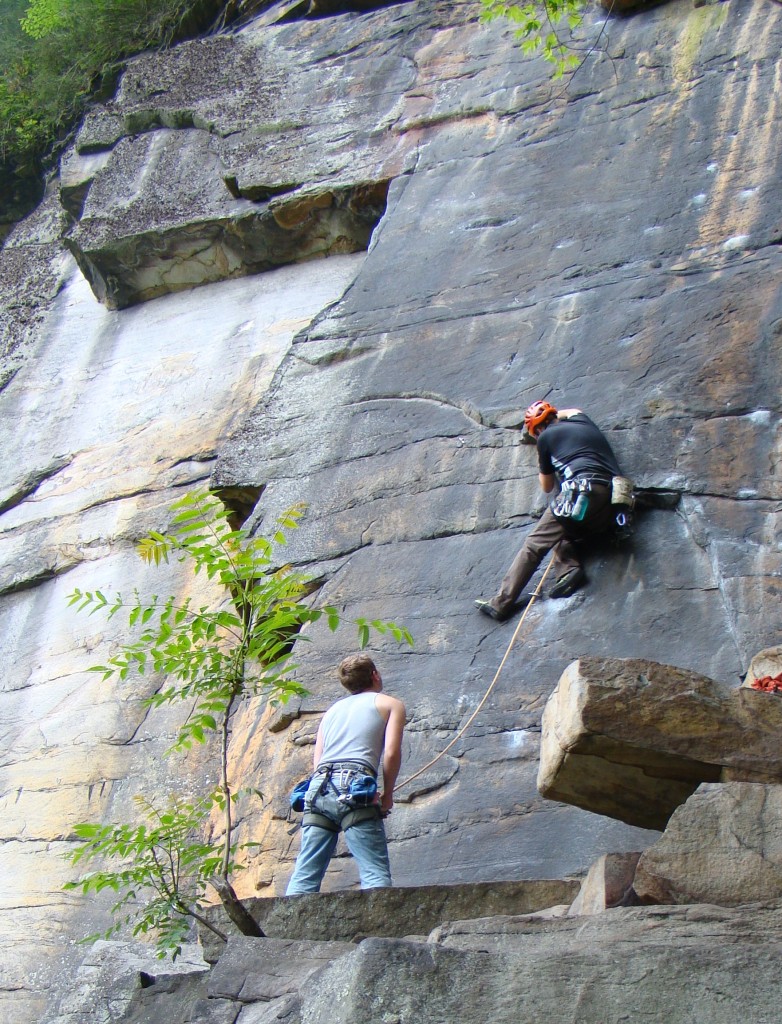 Day 2 Routes (Kaymoor): We were disappointed upon glancing at the latest weather updates during dinner and realizing that the 30% chance of afternoon showers had turned into a 70% chance starting mid-morning.  Our plans all along had been to hit up the Rico Suave area so I could tackle Pockets, but considering that this is one of the few areas at the New that stays dry in the rain, we figured it would be mobbed, so we got up at 6:15 and made sure to be in the Kaymoor parking lot by 7:30.
Rico Suave (5.10a):  Ah, the token rainy day warm-up.  Fun, technical face climbing at it’s finest!
Pockets of Resistance (5.12a):  DONE!  SENT! TICKED!  However you want to word it, this route can finally be crossed off, as well as Goal #3 on my 2012 Hit List.   This line was “supposed” to be my first 5.12, but better late than never I guess!  My last bout with Pockets was last August, when the summer heat and humidity ganged up on me at the crux, making for a desperate and frustrating fall at the last move 5 times in a row.  Not only were conditions way better this time, but I can tell I’m a lot stronger than I was last summer.  It took me a while to reacquaint myself with all the moves, and I figured out some new beta at the crux that felt way easier.  When I went up again, everything felt perfect and the send went off without a hitch.  Redemption!
Out of the Bag (5.11d):  Still no sign of rain, so we all kept climbing…With Pockets out of the way, I felt lighter than air, and decided to take a run up this nearby 4-star classic.  A group of guys had been working it all morning, and only one of them had been able to complete it.  Their draws were already up, and the group was ready to leave, so I volunteered to take a run up it, assuming I would flail around at the dyno-esque crux in a similar fashion.  I carried my own draws with me, so that I’d have the option of swapping theirs out with mine on the way down if I felt close to sending…but turns out that was just training weight since I sent it first go!  I feel guilty calling it an actual flash, since technically it was not my first time on the route – 4 years ago I threw a toprope on it after climbing Rico, but I obviously had no business being on it then, since my recollections of the route are nothing but a blur of bumper belays and aiding on draws.  I think it’s safe to say that my prior experience on the route gave me no advantage.  But regardless of what you call it, effort-wise it feels like a flash to me, and that’s definitely an exciting breakthrough for me. 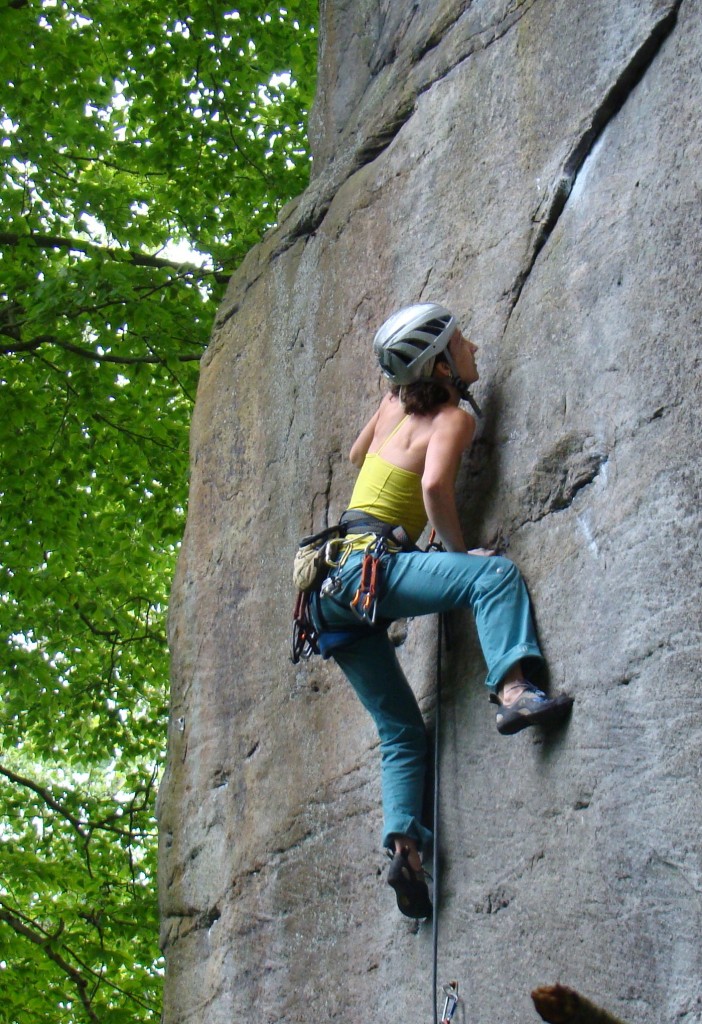 Eyeing down the crux on Pockets of Resistance (5.12a)

Another breakthrough?  I climbed without an ankle brace for the first time since the fracture.  It wasn’t on purpose, actually – I realized on Friday night while we were setting up camp that my brace was sitting in the front pocket of my gym bag, which I’d removed from the car about 10 minutes before getting on the road.  I wasn’t too worried about it, considering that my doctor had said I no longer need it 3 weeks ago, but I was afraid that not having it would get in my head a little bit and cause me to be timid – but in fact I think it did the opposite.  All weekend I felt strong and confident, without an ounce of hesitation.  At first I was puzzled as to why, but I think I figured it out.  The brace was a constant reminder that I’d gotten hurt.  Every time I looked down to place my foot, I saw it.  Every time I reached out for a far away foot hold, I could feel the brace restricting my movement.  Without it, the injury wasn’t occupying any head space during my climb, and I was able to climb freely without any negativity lurking around in my head, conscious or otherwise.  That’s not to say that I haven’t learned from the experience or am trying to forget that it happened, just that I’m ready to put it behind me.   I knew I wasn’t going to climb in it forever, but hadn’t been sure how or when to leave it behind, so this accidental oversight may have been just what the doctor ordered! So that was my Mother’s Day weekend, culminating in a rainy pit stop for homemade pizza at my own mommy’s house on the way back to Charlotte (and to her credit she’s still happy to see me when I come to the door stinky and dirty!)  I hope all my other readers who are mommies were able to do something fun with their loved ones this weekend too – please feel free to share your adventures below!